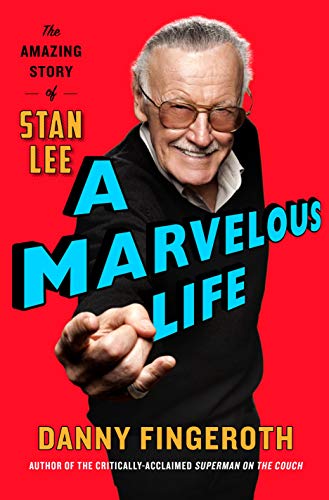 The comprehensive biography of STAN LEE, father of SPIDER-MAN and THE AVENGERS, beloved comicbook writer and editor, and former president and publisher of Marvel Comics, by Lee’s colleague of over four decades.

Stan Lee co-created SPIDER-MAN! And IRON MAN! And the HULK! And the X-MEN! And more than 500 other iconic characters! His name has appeared on more than a billion comic books, in 75 countries, in 25 languages. His superheroes have starred in multibillion-dollar grossing movies and TV series. This is the story of how Stanley Martin Lieber, a poor kid from Washington Heights became STAN LEE, international legend.

Danny Fingeroth (comics industry veteran, author, and longtime Stan Lee friend and colleague) writes a comprehensive biography of this powerhouse of ideas who changed the world’s understanding of what a hero is and how a story should be told, while exploring Lee’s unique path to becoming the face of comics.

With behind-the-scenes stories and sourced with exclusive, new interviews with Lee himself and other legendary comics and media figures, A Marvelous Life has insights and revelations that only an insider like Fingeroth can offer.

Fingeroth, himself a longtime writer and editor at Marvel Comics and now a lauded pop culture critic and historian, knew and worked closely with Stan Lee for over forty years. Fingeroth is able to put Lee’s life and work in a context that makes events and actions come to life as no other writer could.

By 1968, it must all have seemed like a dream to Stan Lee. Starting at a job at age 17 in 1940 — one that likely seemed to be just another temporary gig like the many he’d gone through since graduating DeWitt Clinton High School the previous year — he had now progressed, after a 25-year career that encompassed the ups and downs of the comics business, to an extraordinary position. He’d become the head editor of Timely Comics at age 18, and had presided over what had been, until 1957, one of the largest volume producers of comics in the country. He was well-known in the field, and generally well-liked, even admired, by his peers. But he was by no means famous and certainly not considered any kind of influence on the overall culture, popular or otherwise, and not even really on comic books outside of the ones he oversaw.

He then weathered the implosion of 1957, and, in its wake, gathered his wits and his forces to stumble upon the phenomenon of Marvel Comics. The comics were successful, and were being noticed not just by children — as rabid in their love for the stories and the characters and the creators as they were — but by college students. In addition, they were being noticed by adults who had loved the comics of their childhoods and now were interested in what Marvel was doing — highly-educated adults like Roy Thomas and Dr. Jerry Bails. And celebrities like Federico Fellini were noticing, too.

So Stan Lee, who had been eager to leave comics — and nearly desperate enough to actually do so — was now busy reconstructing comics — and himself — into something new. He was even regularly speaking to large crowds at colleges and universities all over the country. No comic book editor or writer had ever been in exactly this position. The entire world was in flux in the late ‘60s, and many people seemed to want to know what Stan Lee thought about the political and social upheaval that was going on. What an odd thing.

For whatever reason, Stan was no longer just selling stuff. Of course, his livelihood and lifestyle depended on him making and selling stuff. But now, added to what would turn out to be a lifelong compulsion to tell the truth (even if that truth was disguised with casual wording and surrounded by hype) was the desire to say — in person and in print — things that had meaning. Comic books, which had given him a pleasant way to make a living, had suddenly made him a figure whose opinions people wanted to know. But did he want to share his opinions in public — not just at lunch with his pals, or in the relative intimacy of a college auditorium, but in the same pages of the same magazines where Marvel’s characters fought supervillains and emoted grandly?

Well apparently, he did want to share his feelings and opinions — because that’s exactly what he did. Apparently, he felt he had something to say that needed to be shared. But whose opinions would he be sharing? Stan Lee’s or Marvel Comics’? Because they were now, in many ways, one and the same — except, of course, for the small detail that he was neither the owner nor the publisher of Marvel Comics. Nonetheless, share he did.