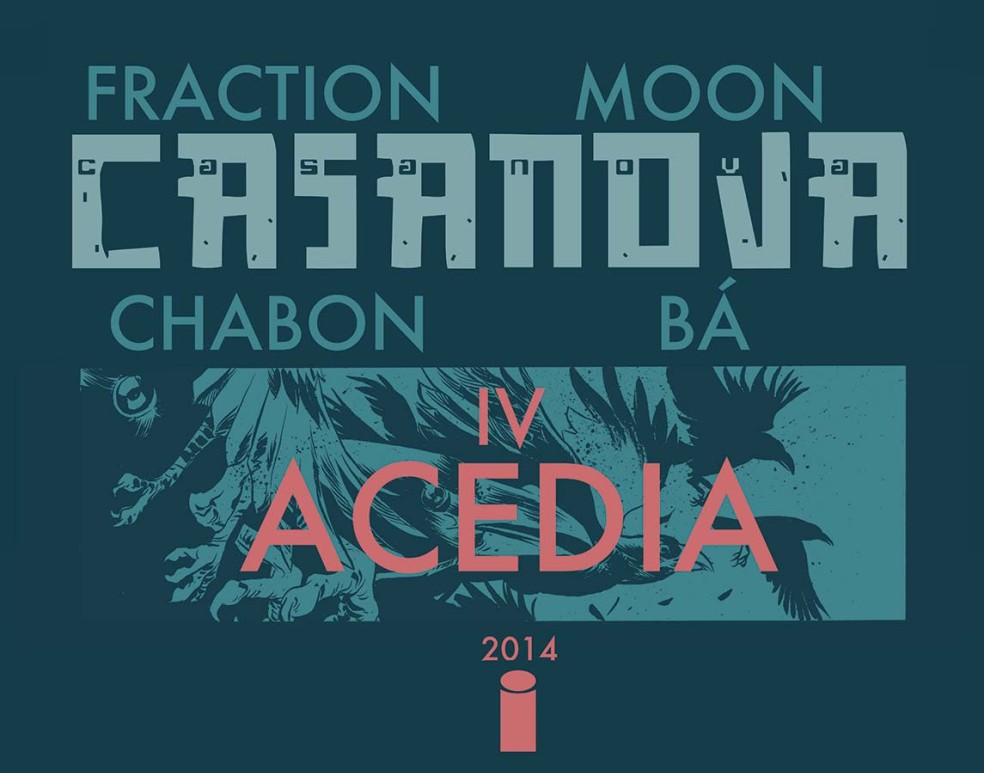 [quote=“Matt Fraction”]It’s just best for the book right now. And that’s sort of what all the business decisions about “Casanova” have always been – “What is going to allow the book to exist right now?” This is the best place for us right now. I’m thrilled to be back.

It was the first comic I ever wrote, and I wrote it because Eric Stephenson asked if I wanted to write a comic. I had written short stories, and I had written graphic novels, but I hadn’t written a comic with staples. It was all on Eric. He was and is “Casanova’s” first fan, and I think I can channel the excitement and energy that Image has right now into recreating and rebirthing the series.

When the story opens up, Casanova has complete amnesia. Casanova doesn’t remember the first three volumes, and he’s not going to figure it out. So it’s kind of a perfect place for new readers to come in, because your lead character has no idea what happened in the past, either. An interstellar James Bond has complete amnesia, and Blofeld and all the bad guys find out. Basically everybody he’s ever pissed off, every woman whose heart he’s ever broke, every relationship he ever ruined, every person he’s ever left widowed or orphaned, find out he’s helpless as a kitten, living on our Earth, in a very regular, normal place, in Los Angeles, and all of the bad guys come after him. It’s like a sexy, psychedelic, spy-addled “Straw Dogs.”

This sets up the next trilogy. There were three volumes, and we’re going to put out hardcovers of those; we’re going to put out, I hope, a big collection of all three. But this is always going to stand alone, unless we collect everything in one giant book – which I’m not a fan of, but I could be swayed. This was always a standalone in the grand scheme of things. This is the most different; this is entirely independent. It’s the midpoint, and the main character doesn’t remember the first three – so, come on.[/quote]

[quote]Casanova: Acedia #1
Story by Matt Fraction, Michael Chabon
Art by Fabio Moon, Gabriel Ba
Cover by Fabio Moon, Gabriel Ba
Publisher Image Comics
Cover Price: $3.99
Release Date Wed, January 28th, 2015
MATURE READERS
Marooned in Los Angeles with no memory of his past, Casanova Quinn takes on the mystery of his criminal benefactor’s tangled and bloody history—as strange occult forces from the future conspire to… do stuff? To him? To Los Angeles? To you? YES. Featuring the first in a series of backup stories by Pulitzer Prize winner MICHAEL CHABON and CASANOVA[/quote]

[quote]Casanova: Acedia #4
Story by Matt Fraction, Michael Chabon
Art by Gabriel Ba, Dustin Harbin
Colors by Cris Peter
Cover by Fabio Moon, Gabriel Ba
Publisher Image Comics
Cover Price: $3.99
Release Date Sep 2nd, 2015
Who is Amiel Boutique? Who is Quentin Cassaday? Who are any of us, really, when you get down to it? Also: Whose minds are Chabon and Bá blowing THIS time?
You can checkout Sketch Pages by Fabio Moon and read “The Metanauts: Kawaii Five-O, Part 4” by Michael Chabon & Gabriel Bá in the physical comic, available at your local comic shop.[/quote]

The world-melting CASANOVA returns. Casanova Quinn doesn’t remember who he is or how he got here—the only thing he knows is an awful lot of people want him dead and the world might be ending. Psychedelic, sexy, and surreal science-fiction the way only comics can do it. Also apparently it’s been ten years since CASANOVA began publishing. So we have that going for us, which is nice.
[/quote]

Casanova studies his benefactor and his benefactor returns the favor as a mysterious woman with connections to them both emerges from the shadows of sun-soaked Los Angeles.
[/quote]