[quote]Deadly Class #5
Story by Rick Remender
Art by Wes Craig
Colors by Lee Loughridge
Cover by Wes Craig, Lee Loughridge
Publisher Image Comics
Cover Price: $3.50
Release Date Wed, May 28th, 2014
MATURE READERS ONLY
In the throes of a horrible acid trip, Marcus’s grip on reality slips, casting him into the depths of his own past. A past filled with blood and ash. What dark secrets is he hiding? And will he have time to face them before one of the killers out for his blood puts a knife in his heart?[/quote]

[quote]Deadly Class #6
Story by Rick Remender
Art by Wes Craig
Colors by Lee Loughridge
Cover by Wes Craig, Lee Loughridge
Publisher Image Comics
Cover Price: $3.50
Release Date Wed, June 25th, 2014
Hunted through the streets of Las Vegas, Marcus is about to learn a valuable lesson: sometimes the only way to wash away your past is with blood. Stylized violence featuring teenage assassins on acid! Don’t miss the climax of the first arc of the smash-hit series DEADLY CLASS by RICK REMENDER & WES CRAIG.[/quote] 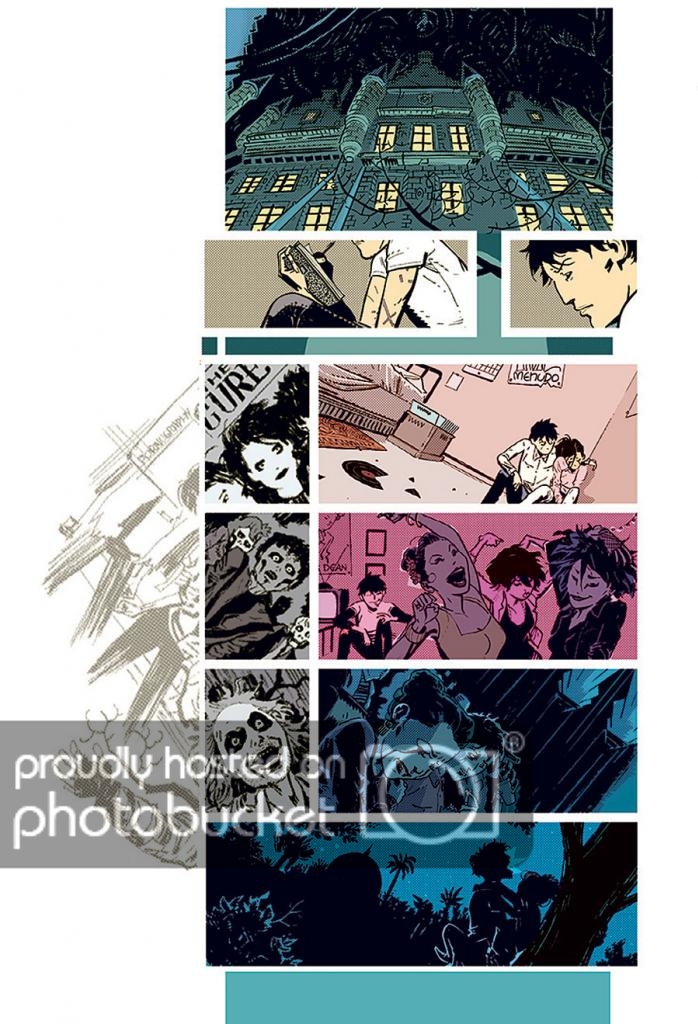 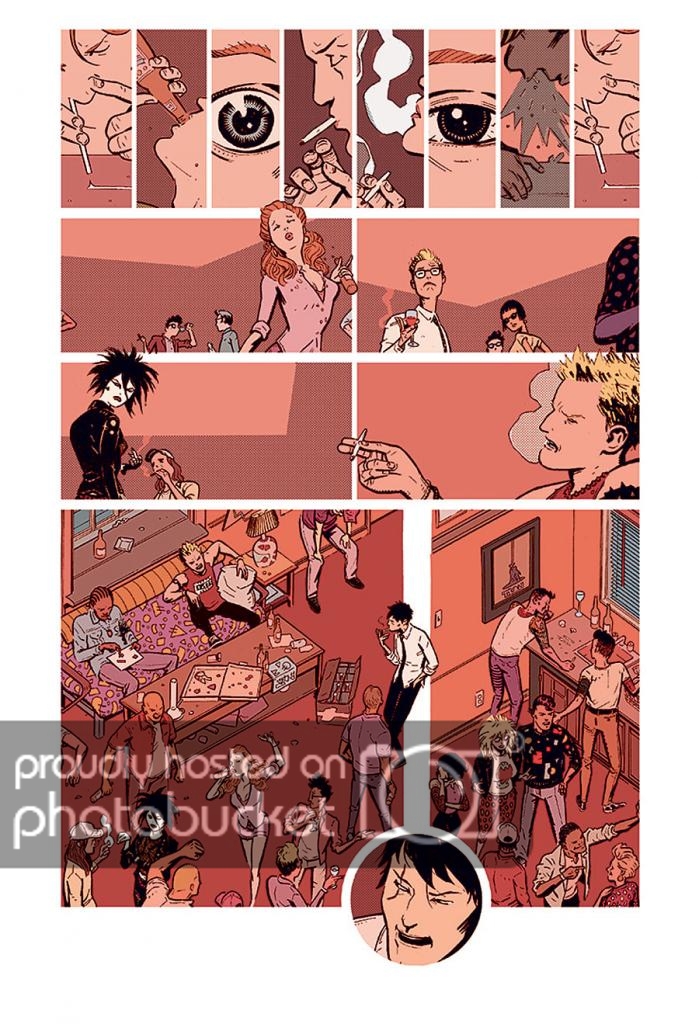 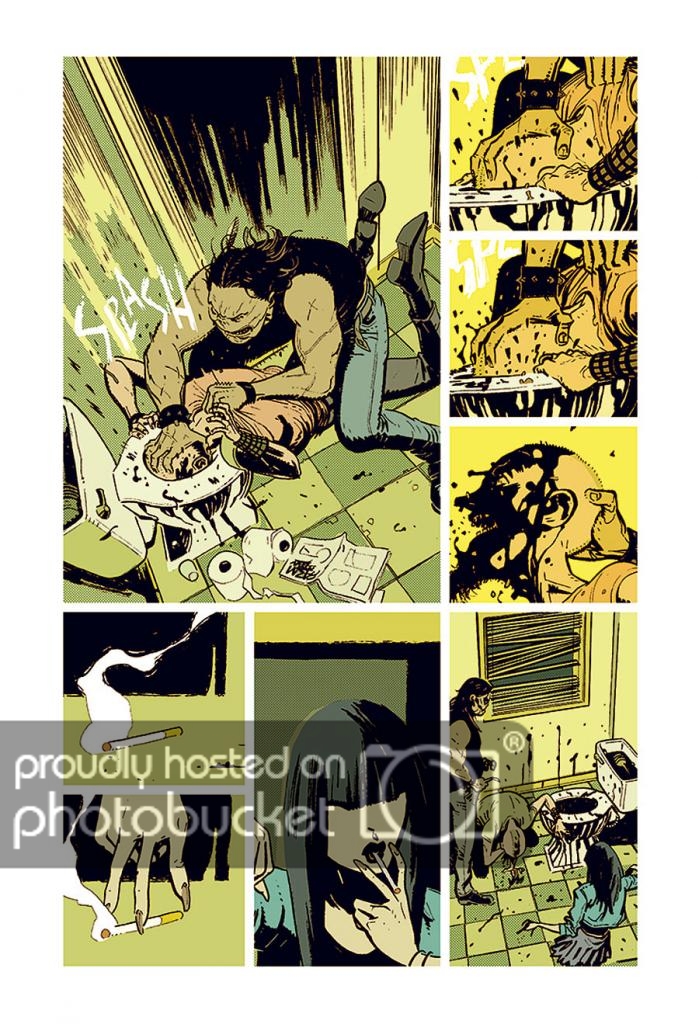 [quote]DEADLY CLASS #8
STORY BY
Rick Remender
ART BY
Wes Craig, Lee Loughridge
COVER BY
Wes Craig, Lee Loughridge
PUBLISHER
Image Comics
COVER PRICE:
$3.50
RELEASE DATE
Wed, October 15th, 2014
For the first time in his life, teenage assassin-in-training Marcus Lopez has a lot to lose: a circle of friends, a lover, a home. All these things are on the line when a terrifying figure from Marcus’ own shadowy past comes back into his life to torment him. It all started during those years Marcus spent in an orphanage, the year’s he’s chronicled in his secret journal.[/quote]

[quote]Deadly Class #11
Story by Rick Remender
Art by Wes Craig, Lee Loughridge
Cover by Wes Craig, Lee Loughridge
Publisher Image Comics
Cover Price: $3.50
Release Date Feb 18th, 2015
MATURE READERS
Marcus and Maria fight for their life, and their love, as the sins of their past come crashing down all around them, wielding Uzis, shotguns, and machetes. Steel your nerves for the heart-pounding finale to the second arc of RICK REMENDER and WES CRAIG’s DEADLY CLASS.[/quote]

It’s back to school for Marcus after barely surviving a cartel kill-squad. But he’s about to discover that even hardened teenage assassins aren’t immune to the ravages of broken hearts and breakup notes.[/quote]

[quote]Yeah, the original idea for “Deadly Class” is a story we’re not going to tell until the fourth arc now. As I built that original story when I was doing my initial outline for the thing I just had the title, “Deadly Class.” Then I cooked something up that was sort of my versions of a “Battle Royale”-style situation. I realized though the problem with “Battle Royale” is that it’s a movie where at the beginning of the film you’re dropped in with a bunch of kids that are put in a situation where they’re all hunting each other. You kind of get to know them on the fly and you get glimpses of who they are, but you don’t really care too much. [Laughs] It’s mostly “Here’s ‘The Most Dangerous Game’ with teenage kids” and then off you go.

The thing that really attracted me to developing “Deadly Class” was the Reagan Youth aspect of it, which was the memoirs of the era, and the teen drama and soap opera. I wanted you to really get to know the kids before we start to escalate things. So the school has almost been a backdrop that’s a sort of C story while the kids are off doing all these other things like high school kids do. The most interesting aspects of high school are not when you’re in class. Plus, they’d just be coasting through school because they’re the stoners, punkers, drop outs, and whatever.

We’ve been seeding the fact that there is stuff going on in the school though. We’re going to start seeing more and more of that happening, and they’re going to have to start taking it all a lot more seriously as things progress.[/quote]

[quote]Deadly Class #14
Story by Rick Remender
Art by Wes Craig
Colors by Lee Loughridge
Letters by Rus Wooton
Cover by Wes Craig
Publisher Image Comics
Cover Price: $3.50
Release Date Jul 1st, 2015
MATURE READERS ONLY
Isolated from his friends and spiraling downward into the black hole of depression and addiction, Marcus must ask himself: did he jump or was he pushed?[/quote]

[quote]Deadly Class #15
Story by Rick Remender
Art by Wes Craig
Cover by Wes Craig
Publisher Image Comics
Cover Price: $3.50
Release Date Aug 5th, 2015
There is a battle coming. A battle royale if you will. But Marcus is in no shape for a fight.[/quote]

The Freshman Finals killing spree spills into the streets of San Francisco. “Die for Me” Part 2 of 5.[/quote]

“Die for Me” Part 3 Hunted and desperate, Marcus and the rats make a final stand in the streets of San Francisco.[/quote]

Marcus learns that when your friends come to kill you, you’re better off with an enemy by your side.[/quote]

“DIE FOR ME” Conclusion

The Freshman Finals end, along with the life of another of our crew.
[/quote]

The Saya story is obviously going to take center stage for a little bit when we come back in a couple months. Saya is a character I’ve fallen in love with and am excited to get more into, but I wanted to do that when we could make her the focus of the book and shift things onto her. Now that we know what she’s capable of, it’s time to reveal a few of the mysteries about her.