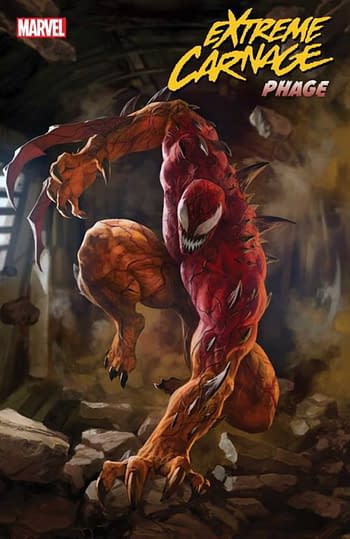 Kicking off in July with EXTREME CARNAGE ALPHA #1, the event will take place over a series of one-shots, each one spotlighting a different symbiote offspring. After writer Clay McLeod Chapman and artist Chris Mooneyham return to the adventure of Andi Benton in EXTREME CARNAGE: SCREAM, Phage, one of the deadly life foundation Symbiotes, will get the spotlight in EXTREME CARNAGE: PHAGE #1 by writer Steve Orlando and artist Gerardo Sandoval.

Collectively called the Life Foundation, symbiotes SCREAM, PHAGE, RIOT, LASHER and AGONY have tried to reconcile the sometimes-noble intentions of their hosts with their often-bloodthirsty impulses. But the Life Foundation symbiotes aren’t the only symbiotes who find themselves reinvented after KING IN BLACK. They have an older sibling who may be reinvented in its own right: CARNAGE. Here’s what Orlando had to say about Carnage’s twisted plans and tackling this fan-favorite character:

« As a young reader in the 90s, no event was bigger and more blockbuster for me than Maximum Carnage – between the console games and the comic stories, it was an entire chapter of my life! So to be part of EXTREME CARNAGE, and work with the Life Foundation Symbiotes (who also popped into my life early thanks to SNES) is beyond exciting! Carnage’s new plan is about to upend our world from its bedrock, and being able to explore how Phage fits into that world has been a great moment. He’ll come out of our issue with a power and charisma even more terrifying than before – and trust me, he’ll live up to his name in the first five pages alone! »

Three more to go before the finale…