Five Weapons is about a boy who enrolls into a specialized school for future assassins and how he plans to succeed without ever using a weapon – which is required to graduate. Instead, our hero will use his wit, observation and deduction to take his opponents apart. The school features five tracks of education in the world of assassins; Knives, Staves, Archery, Exotics and Guns, but our hero chooses none of the above. Think of it as Sherlock meets The Hunger Games. Or Encyclopedia Brown meets Wanted.

[quote]Walker Faison, Fanboy Comics: “My favorite part of the premise so far is the inverted role of the hero. It’s simple, but clever. In a story where everyone has advanced fighting skills, the protagonist is exceptional in that he avoids conflict. A possible mentor is introduced, as well, in my favorite of the ancillary characters. Hopefully, we’ll see more of her as the story continues. There are hints of a societal structure at play that are interesting but undeveloped as of the end of issue one.”
Five Weapons

David Brothers, ComicsAlliance: “There are two major twists in Jimmie Robinson’s Five Weapons. The first one comes fairly early on, and is what convinced me to stick with the comic through its run. The second twist comes later, and it’s not so much a plot twist as a plot twist of the knife — it takes what you think you know and holds a knife to its throat in a dark alley. The second twist is killer.”

**Grant McLaughlin, Weekly Crisis: “Robinson’s storytelling is incredibly focused, with no single moment feeling wasted. Even the smallest detail seemingly ends up being important as new questions and reveals are raised. We learn a lot over the course of this issue, and some of the things we learn place earlier lessons in new light or show them to be entirely false. It’s an interesting narrative choice that ably shows this comic to be far more than a gimmicky story about child assassins. The final moments of the book both come out of let field and are telegraph pretty much from the get go, leaving the reader wanting more. Fortunately, it appears that Robinson will be delving into the depth that he’s hinted at throughout this issue.”
**
Vince Ostrowski, Multiversity Comics: “’Kids with weapons’ sounds like something designed to give parents and certain interest groups nightmares. Aside from the basic understanding that kids and weapons is a huge taboo in and of itself, this book is really harmless in that way. There’s no over-the-top violence and while it’s definitely lighthearted, it doesn’t make the use of weapons particularly glamorous. The story doesn’t really ask questions about the ethics weapon-use, but through Tyler’s point of view and sense of honor, kids using weapons comes off looking very appropriately like a bad idea as each new student shows up at the nurses’ office. This view point serves his character and never feels preachy and doesn’t take sides. Jimmie Robinson makes sure that Five Weapons about being fun, above all else.” (9.6/10)

Steve Paugh, Comic Bastards: “The story is a bit more disappointing, if for no other reason than it’s pretty predictable. It also drags at points, repetitively forcing itself along at the end. Finally, I have no vested interest in this character, who comes off so smugly at some points, I wish he’d catch a stray bullet. The mellow reveal at the end was satisfying enough to keep me interested, but I swear to god, if this kid says something along the lines of, ‘I choose the most powerful weapon … my mind,’ I’m not gonna be amused.” (3/5)

Lan Pitts, Newsarama: “Doing triple duty of writing, pencils, and lettering, Robinson doesn’t lose any stride along the way. The panel construction and layouts are sharp and comprehensive, and while the dialog comes at you fast and fierce, nothing is lost along the way. We meet a multitude of characters, both friends and enemies, but never overwhelmed by this new world and its inhabitants. Robinson’s art style is reminiscent to the Saturday morning cartoons of my youth, but maintains an edge of danger throughout the issue. His return to the more young-adult type of stories is a welcomed one here, and if Five Weapons is any indication of what lies ahead, I say let’s welcome more.” (10/10)

Greg McElhatton, Comic Book Resources: “Five Weapons #1 is a mini-series that’s off to a great start, and one of the things I appreciate even more about it is that I feel like this could ultimately stand on its own, or also become a series of mini-series. Right now I’m hoping for the latter only because I feel like there’s so much story potential that Robinson could go for years, but I’d respect the former as well. Either way, though, this is a comic that you should definitely take a look at. Five Weapons is both fun and clever, and that’s a combination you shouldn’t ever pass up.” (4/5)[/quote]

[quote]Five Weapons #2
Story by Jimmie Robinson
Art by Jimmie Robinson
Cover by Jimmie Robinson
Publisher Image Comics
Cover Price: $3.50
Release Date Wed, March 27th, 2013
Tyler barely escapes the knife club only to become the target of both the stick club and every teacher in the school of Five Weapons. This time the faculty plans to beat Tyler at his own game and embarrass him in front of the whole school.
The latest series from fan-favorite creator, Jimmie Robinson![/quote]

[quote]Five Weapons #3
Story by Jimmie Robinson
Art by Jimmie Robinson
Cover by Jimmie Robinson
Publisher Image Comics
Cover Price: $3.50
Release Date Wed, April 24th, 2013
At the annual school festival, Tyler is caught in a battle between the Archery club and the Exotic weapons club, but a new threat emerges from outside the school that could blow his cover and ruin everything.[/quote]

[quote]Five Weapons #4
Story by Jimmie Robinson
Art by Jimmie Robinson
Cover by Jimmie Robinson
Publisher Image Comics
Cover Price: $3.50
Release Date Wed, May 29th, 2013
Tyler has to battle the Gun Club, beat the faculty’s scheme to expel him and keep his secret identity safe at the school of Five Weapons. Not a problem for Tyler’s devious calculations - except this time he doesn’t have a plan.[/quote]

[quote]FIVE WEAPONS #6
story / art / cover A JIMMIE ROBINSON
alternate cover ROB GUILLORY
JANUARY 29
32 PAGES / FC / T
$3.50
“BACK TO CLASS,” Part One
Enrique returns to the School of Five Weapons, a place where kids learn the art of assassination. This time everyone knows his true identity as a low-class servant. Everyone knows he can’t use a weapon. Everyone accepts Enrique’s status, except for one student…Tyler, who knows every trick up Enrique’s sleeve. This time, school is for revenge!
A NEW STORY ARC BEGINS HERE! GREAT JUMPING ON POINT![/quote]

[quote]Five Weapons #6
Story by Jimmie Robinson
Art by Jimmie Robinson
Cover by Jimmie Robinson
Publisher Image Comics
Cover Price: $3.50
Release Date Wed, January 29th, 2014
“BACK TO CLASS,” Part One
Enrique returns to the School of Five Weapons, a place where kids learn the art of assassination. This time everyone knows his true identity as a low-class servant. Everyone knows he can’t use a weapon. Everyone accepts Enrique’s status, except for one student…Tyler, who knows every trick up Enrique’s sleeve. This time, school is for revenge!
A NEW STORY ARC BEGINS HERE! GREAT JUMPING ON POINT![/quote] 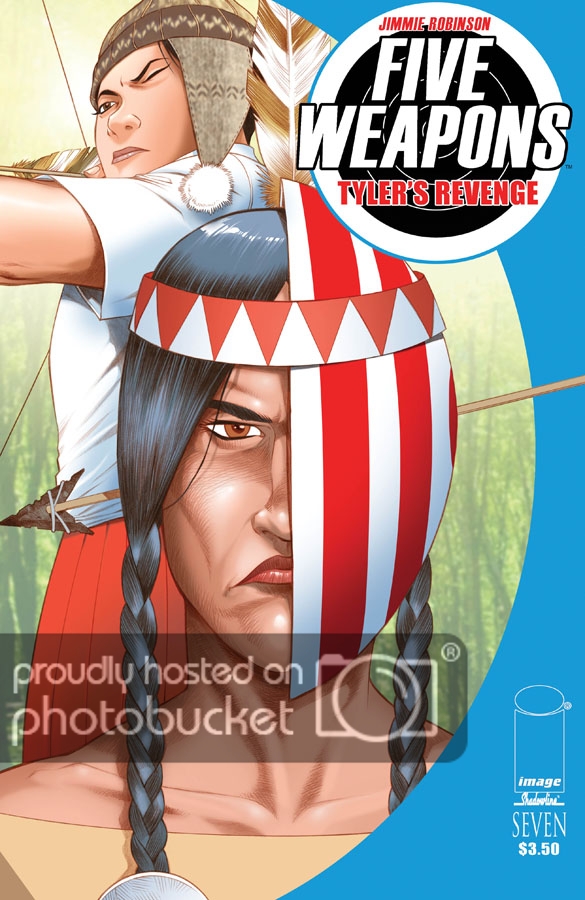 [quote]FIVE WEAPONS #7
Written by: Jimmie Robinson
Art by: Jimmie Robinson
Cover by: Jimmie Robinson
Pages: 32
Price: $3.50
In stores: Feb. 26
“Back to Class,” Part Two. The tables are turned on Enrique in a no-win contest at the school of Five Weapons. Tyler is now the smartest kid in school and he’s using Enrique as a pawn in his malicious plans, but Enrique learns an old secret that could tilt the rivalry in his favor.[/quote] 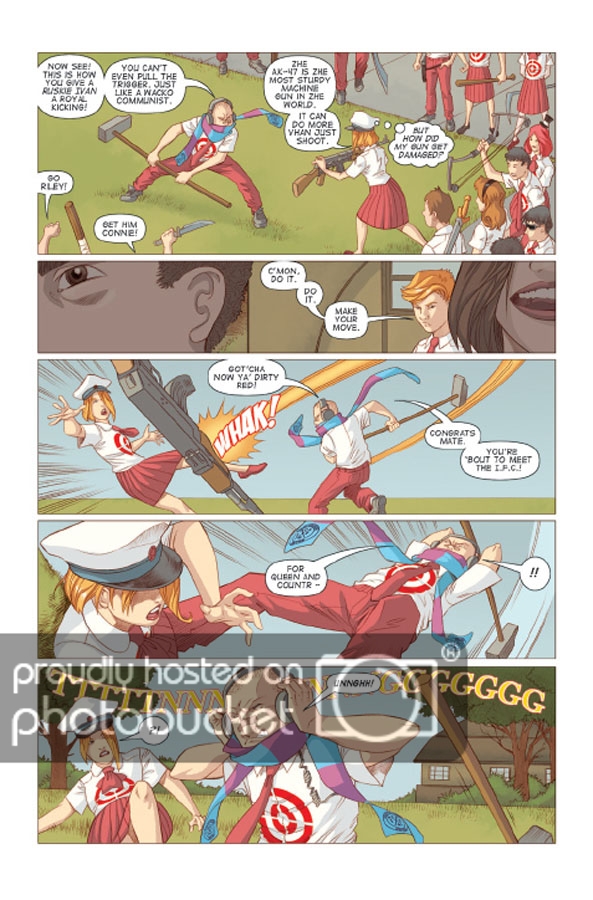 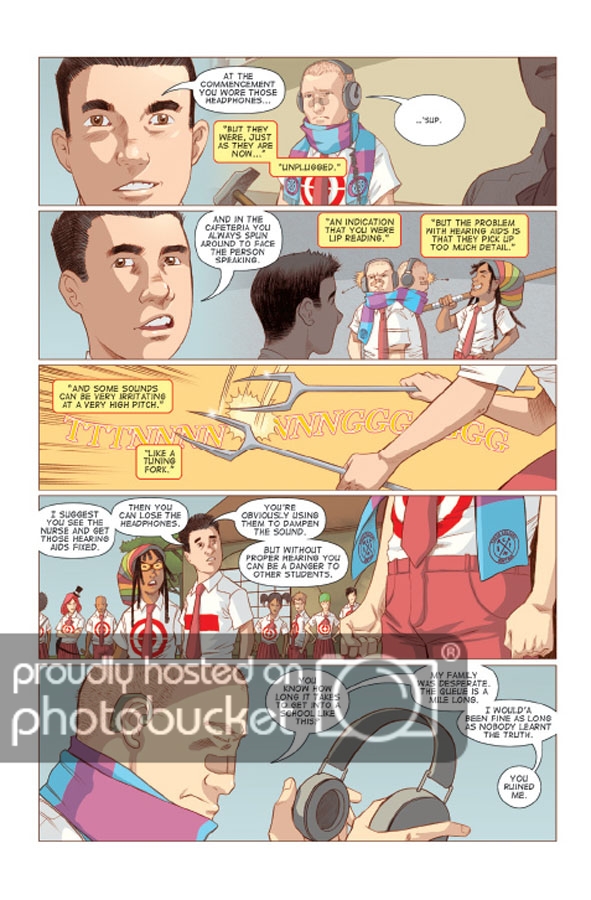 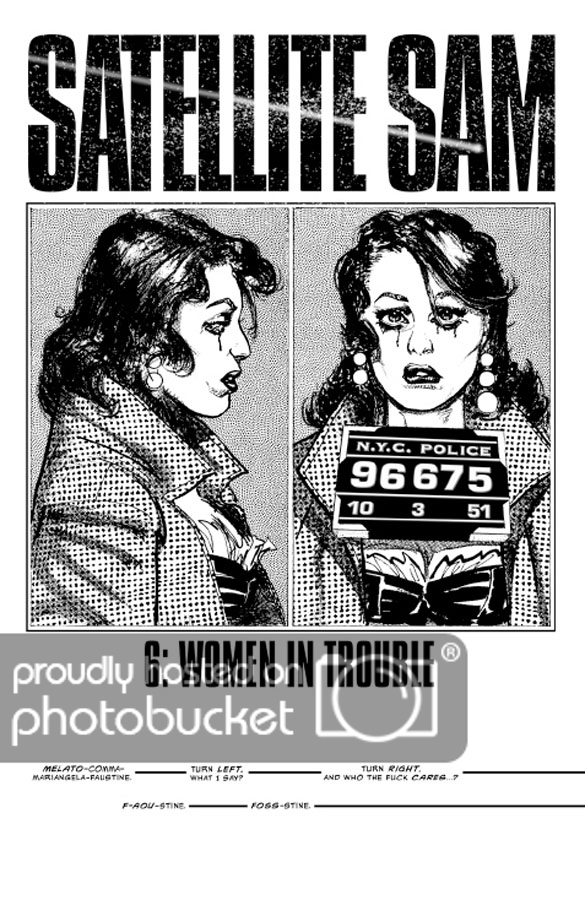 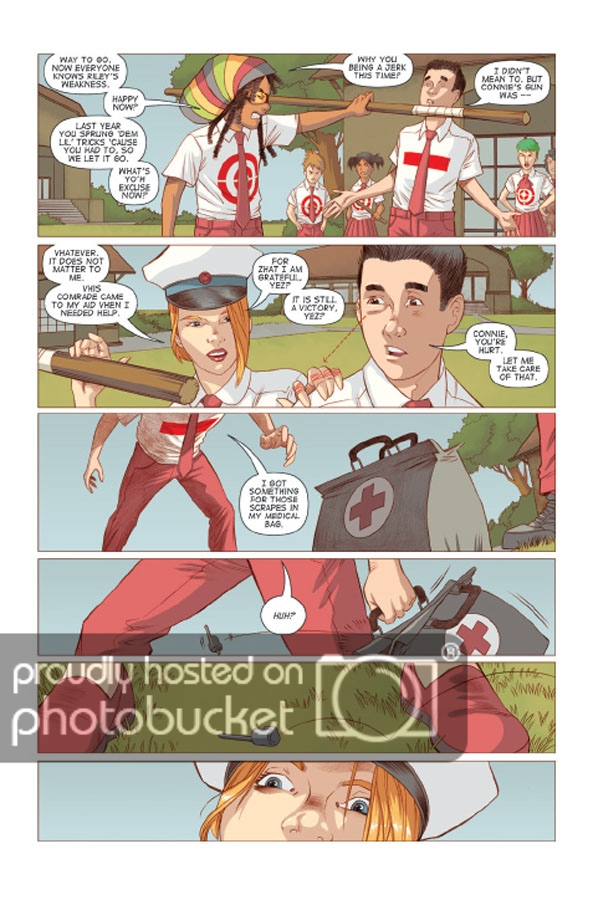 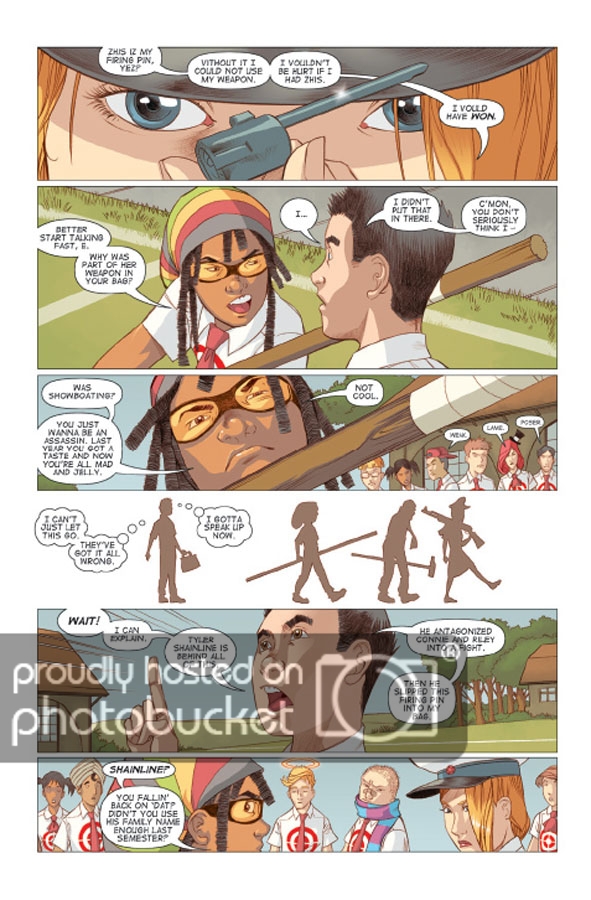 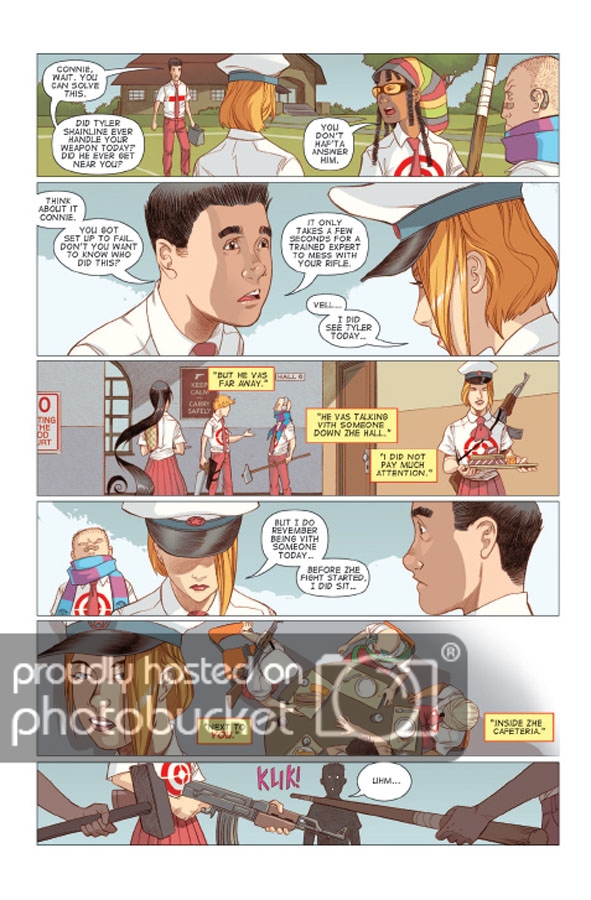 [quote]FIVE WEAPONS #8
Written by: Jimmie Robinson.
Art by: Jimmie Robinson.
Cover by: Jimmie Robinson.
Description: “Back to Class,” Part Three.Enrique hits bottom. He’s facing expulsion and the loss of his girlfriend, but he’s not defeated. As Tyler gloats over his victory, Enrique finds new hope from an unexpected friend when Principal O returns!
Pages: 32.
Price: $3.50.
In stores: April 16. [/quote]

[quote]FIVE WEAPONS #9
Written by: Jimmie Robinson.
Art by: Jimmie Robinson.
Cover by: Jimmie Robinson.
Description: “Back to Class,” part 4. Enrique, Principal O, and the Nurse unleash a full assault against Tyler in order to regain power of the school clubs. But Tyler isn’t going down without a fight because he has a secret weapon of his own: the fastest animal on earth…Principal Z’s cheetah.
Pages: 32.
Price: $3.50.
In stores: June 4. [/quote]