[quote]Michael Korvac was originally a villain, but he became more complex than that in the classic Avengers “Korvac Saga” (by George Perez and others). He was a god-like, Beyonder-level cosmic force who wanted to challenge the great cosmic powers and bring order to the Universe. He was almost a force for good… except that he was ruthless and capricious. Trying to stop him, the Avengers and the Guardians all died… no kidding. Korvac restored them because he regretted his actions and saw what he had become, and then negate himself so as not to risk endangering the Universe with his power.

It’s that Korvac we’re dealing with: noble, determined, high-minded and essentially trying to rule fairly and justly, and look after this people. He’s not a bad guy. The Guardians are his police, his bodyguards, his retainers. They are loyal to him because they believe in him. But there’s a dark, dark menace arising in his kingdom that threatens his rule, his people, a lot more besides…[/quote]

[quote]Korvac Saga #1
Story by Dan Abnett
Art by Otto Schmidt
Colors by Cris Peter
Cover by Otto Schmidt
Publisher Marvel Comics
Cover Price: $3.99
Release Date Jun 24th, 2015
• Lord Michael Korvac governs the Forest Hills, but his domain is threatened by rival lords, chaotic threats from beyond the Wall, and, worst of all, a dark madness that is spreading through the population.
• Led by the noble Major Victory, Korvac’s loyal Guardians must find the source of the evil before it corrupts the world as they know it.[/quote]

[quote]Korvac Saga #2
Story by Dan Abnett
Art by Otto Schmidt
Colors by Cris Peter
Letters by VC - Clayton Cowles
Cover by Otto Schmidt, Alex Garner
Publisher Marvel Comics
Cover Price: $3.99
Release Date Jul 15th, 2015
• As Lord Michael Korvac handles a crucial peace summit with his rival, the Wonder Man Simon Williams, Korvac’s loyal Guardians struggle to find the source of the madness plaguing the kingdom.
• The truth is closer to home than anyone could have realized, and the revelation will shake the kingdom to its foundations.[/quote]

[quote]KORVAC SAGA #3
Written by: Dan Abnett.
Art by: Otto Schmidt.
Covers by: Otto Schmidt, Yasmine Putri.
Description: A dark and potentially catastrophic madness haunts the domain of The Forest Hills, and has caused an unthinkable tragedy. Lord Michael Korvac, governor of the domain, has commanded his loyal Guardians to neutralize the threat as fast as possible, as a crucial peace summit with Korvac’s rival, the Wonder Man Simon Williams, is at risk. But can even the powerful Starhawk locate the source of the problem? And if he can, can he survive it?
Pages: 32.
Price: $3.99.
In stores: August 12. [/quote]

[quote]The Korvac Saga #4
Story by Dan Abnett
Art by Otto Schmidt
Colors by Cris Peter
Letters by VC - Clayton Cowles
Cover by Otto Schmidt
Publisher Marvel Comics
Cover Price: $3.99
Release Date Sep 9th, 2015
• Lord Michael Korvac’s kingdom of The Forest Hills is all but overwhelmed by a dark plague of madness, and the crisis threatens to draw down the wrath of God Doom himself.
• Korvac’s rival, the Wonder Man Simon Williams, has decided to move against the governor, deploying his Avengers in an effort to seize power and spare both Korvac’s kingdom and his own from Doom’s displeasure. Only Korvac’s loyal Guardians stand in the way of this ruthless power play, and a terrible, world-shattering secret is about to be discovered…[/quote] 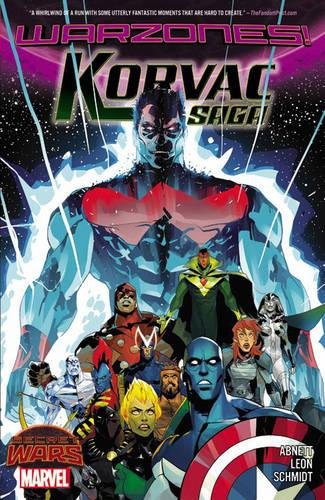