[quote]Legends of the Dark Knight 100-Page Super Spectacular #1
Story by Dan Mishkin, Jim Zub
Art by Tom Mandrake, Neil Googe
Cover by David Antoine Williams
Publisher DC Comics
Cover Price: $9.99
Release Date Wed, December 11th, 2013
LEGENDS OF THE DARK KNIGHT 100-PAGE SUPER SPECTACULAR #1 is Gotham-noir at its best. In “Without Sin”, a flip of a coin and a trip to the confessional leads Harvey Dent to become the prime suspect in a grisly murder. The disfigured body of a priest dumped at a Gotham City demolition site has all the markings of Two-Face, but Dent knows his dark side better than anyone. And Dent isn’t afraid to kill just to defend his innocence. Always the detective, Batman digs deep into city corruption, anonymous donors, and the cryptic clues that the church refuses to help him decipher. But in Gotham City, not everything is as it appears. Why is Batman so convinced that Two-Face didn’t commit this murder?
Then, in “Dr. Quinn’s Diagnosis,” Batman interrogates Harley Quinn, who might reveal what the Joker is up to now … if Batman agrees to one strange demand! Harley Quinn is never short on punch lines, and the banter between her and the Dark Knight is riddled with jabs and kicks! But who is questioning whom? The interrogation turns upside down when the former Dr. Quinzel starts to psychoanalyze her opponent. Why does Harley want to learn more about the mystery behind the Batman? Will she uncover Batman’s secret origins?[/quote] 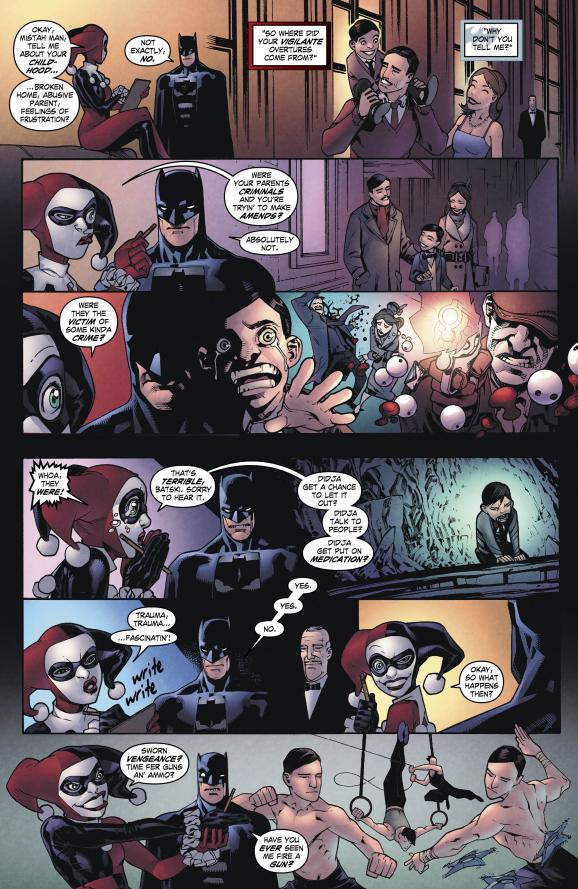