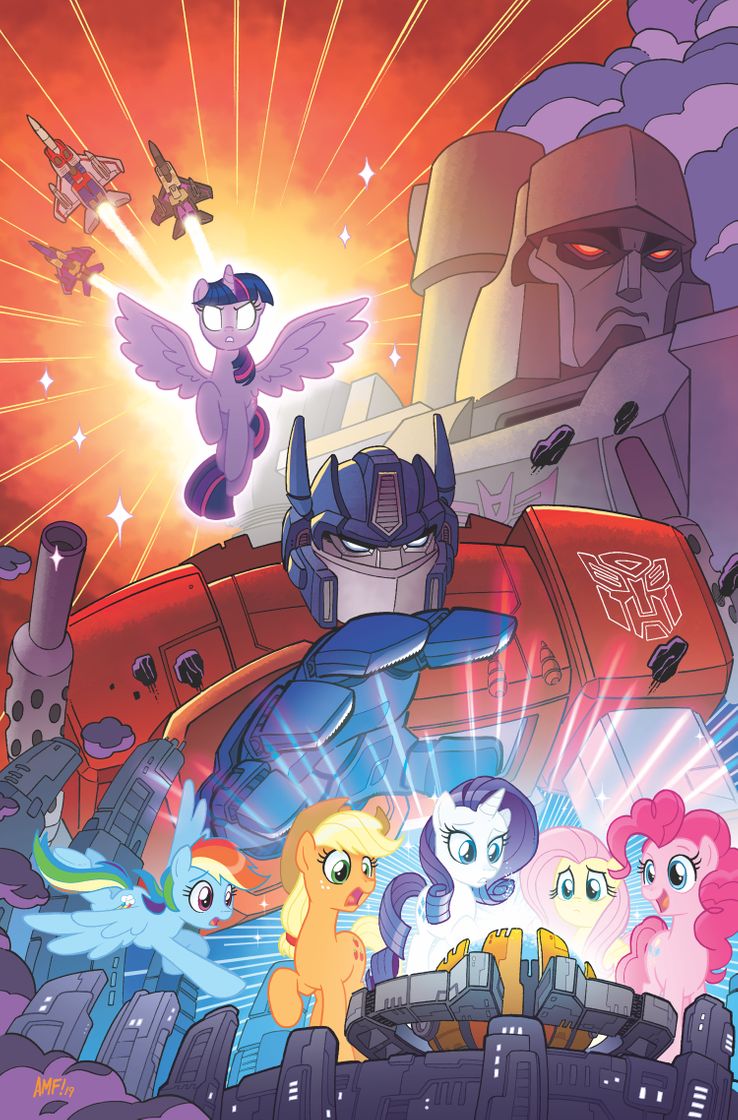 SAN DIEGO, CA (February 6, 2020) – When the Mane Six gallop alongside Autobots in battle, the forces of villainy stand no chance! IDW Publishing (OTCQX: IDWM), under license by Hasbro, Inc. (NASDAQ: HAS), welcomes comic fans of all ages to enjoy the wildest crossover of Hasbro creations ever: MY LITTLE PONY / TRANSFORMERS , a four-issue miniseries shipping weekly in May!

In MY LITTLE PONY / TRANSFORMERS , the scheming Queen Chrysalis casts a spell in search of changeling allies, but accidentally interferes with a distant Cybertronian Spacebridge… and brings the Autobots and Decepticons to Equestria! As the dust settles, it’s up to Twilight Sparkle, Optimus Prime, and others to overcome the menace of malevolent magic and machinery!

“The writing I’ve gotten to do individually for MY LITTLE PONY and TRANSFORMERS have already proven to be some of the most fun I’ve had in my career, so it’s pure joy to play them off each other,” says Asmus. “We’re making a wild mash-up unlike anything else in your comic collection. You basically owe it to yourself and your future happiness to get a copy!”

“It’s been a delightful challenge finding common threads between the ponies and bots. It’s certainly a fun and unique opportunity,” says Flynn. “I hope fans of both franchises can come together and enjoy this.”

“ MY LITTLE PONY and TRANSFORMERS are two of my all-time favorite universes. Having written for them both previously, the idea of bringing the citizens of Equestria and Cybertron together is incredibly exciting,” says Maggs.

“Teaming TRANSFORMERS and MY LITTLE PONY has been a dream we’ve had for a long time,” says IDW Editor-In-Chief John Barber. “We’re all really excited to see this mashup of characters by a mashup of creators who are honoring the legacy of both universes… and doing it in the most bonkers, fun way imaginable!”

For information on how to acquire copies of MY LITTLE PONY / TRANSFORMERS , please contact your local comic shop or visit www.comicshoplocator.com to find a store near you. 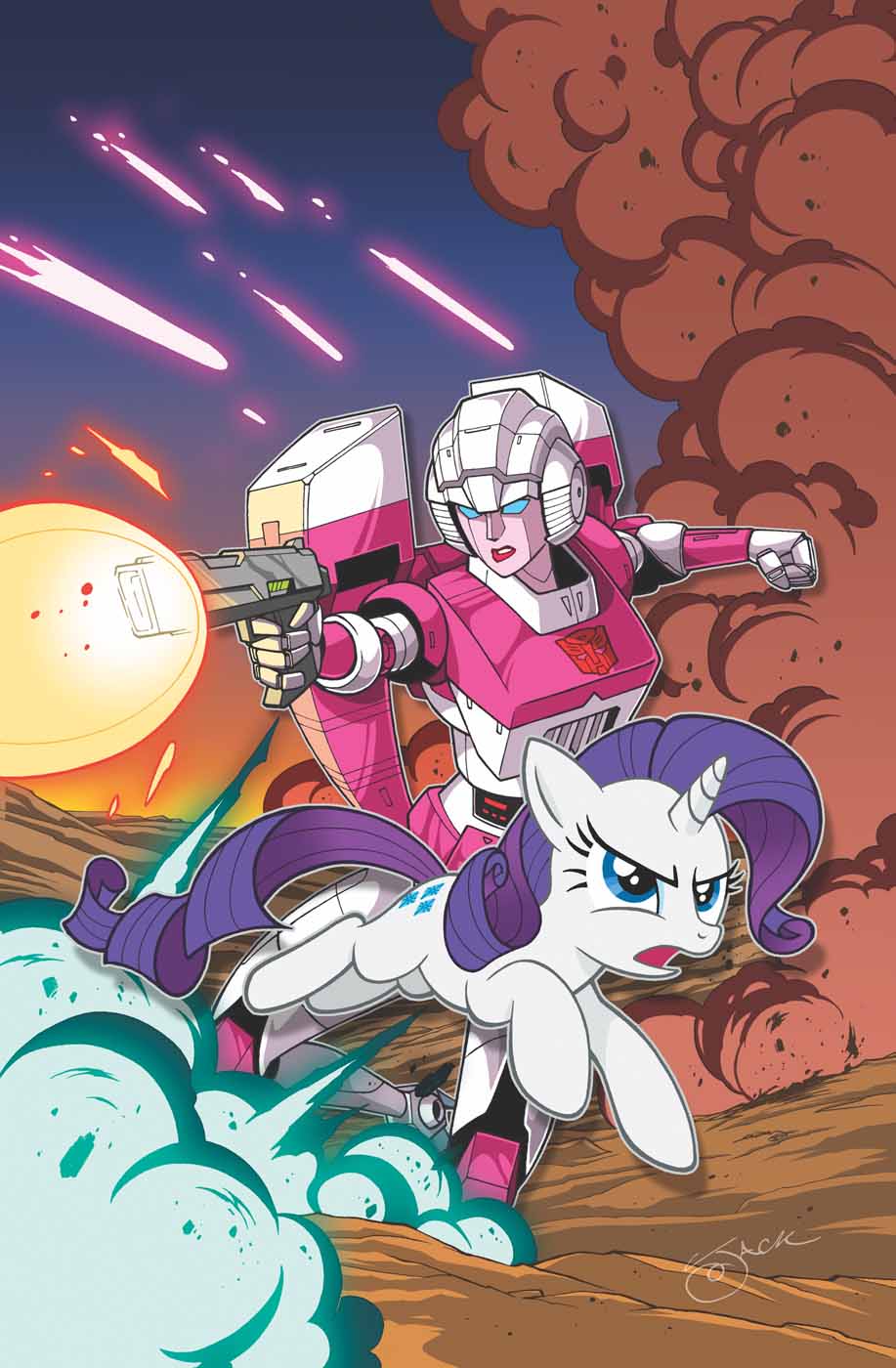 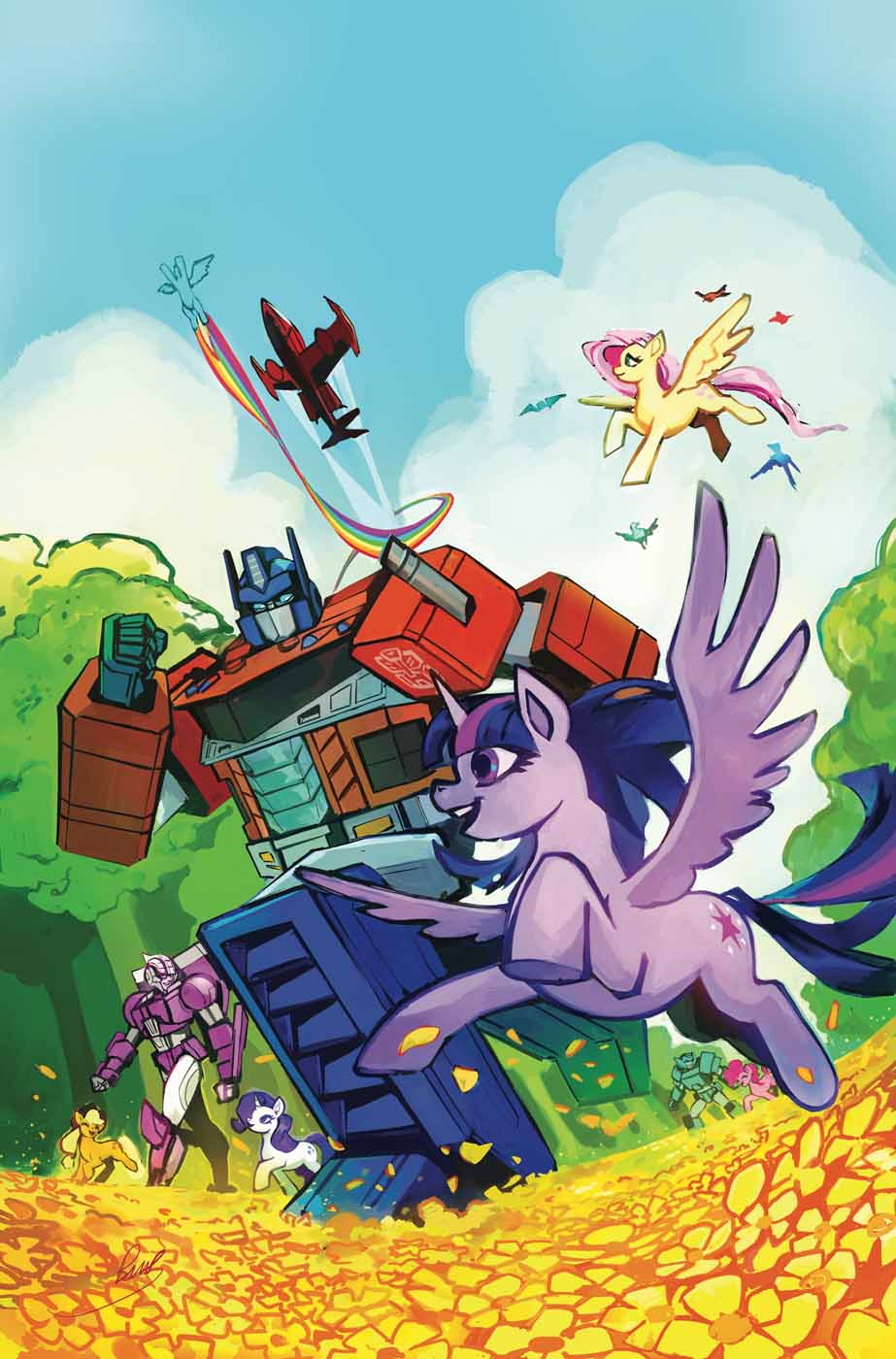 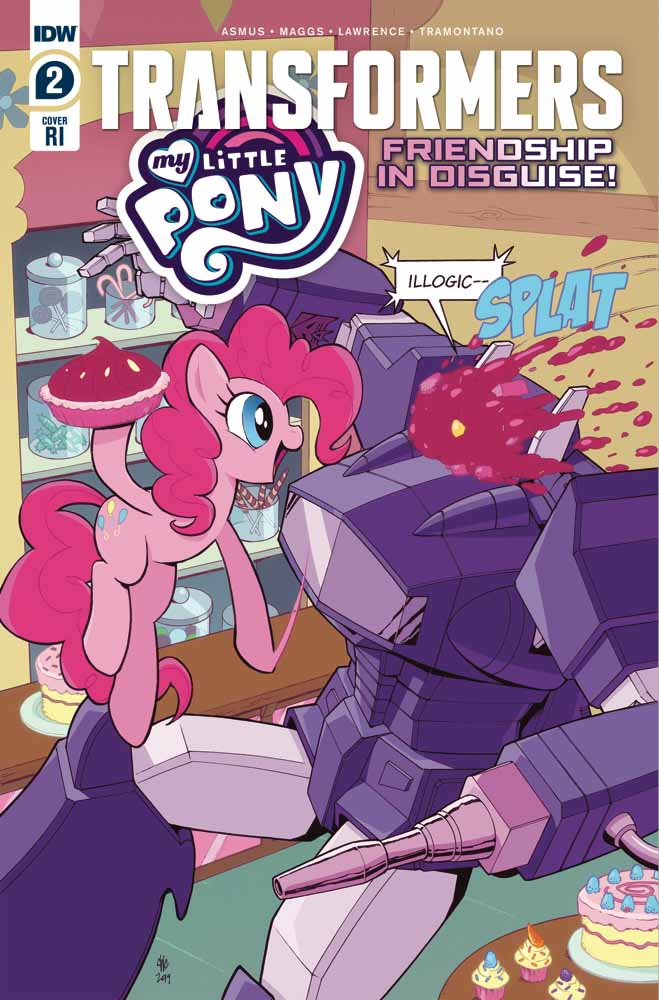 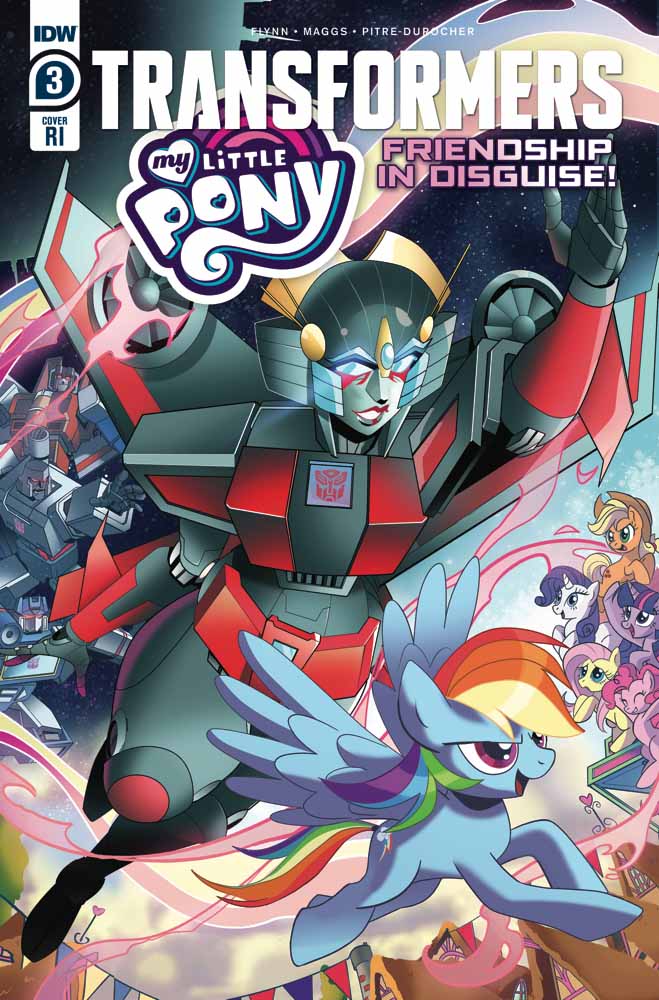 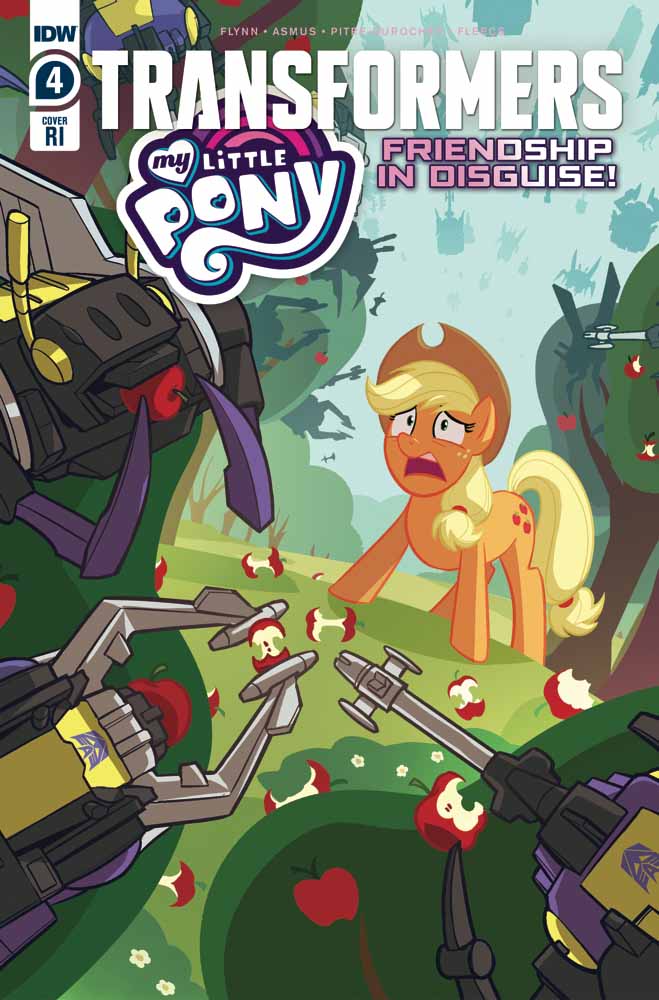 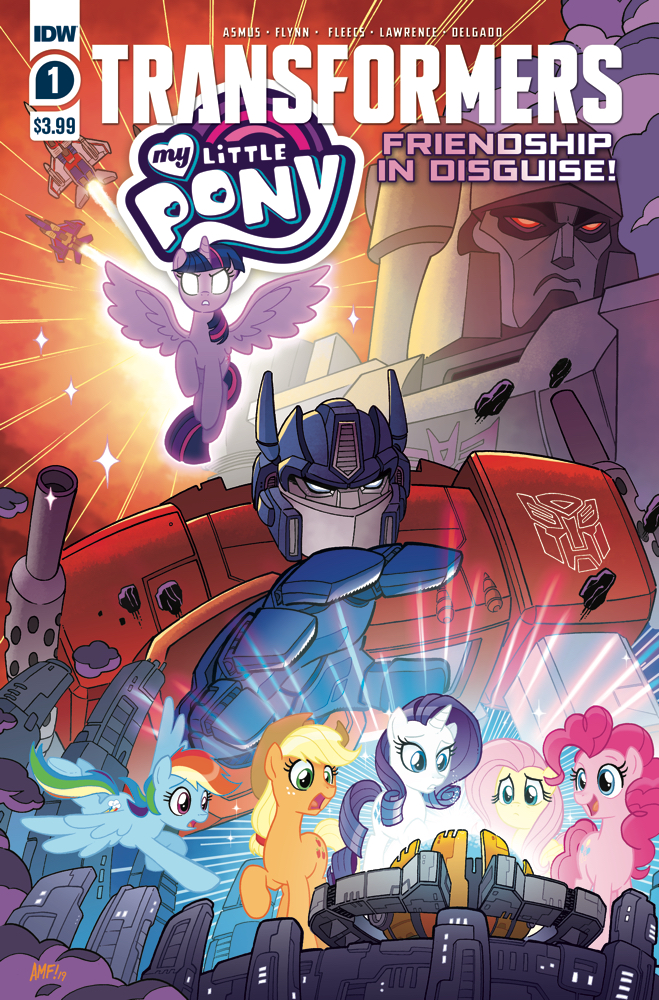 Description: When Queen Chrysalis casts a spell looking for more changelings, she accidentally interferes with a malfunctioning Spacebridge! What’s this mean for our favorite fillies? There are suddenly a bunch of Autobots and Decepticons in Equestria! And as the dust settles, Rarity and Arcee find themselves teaming up against a hostile Decepticon force… 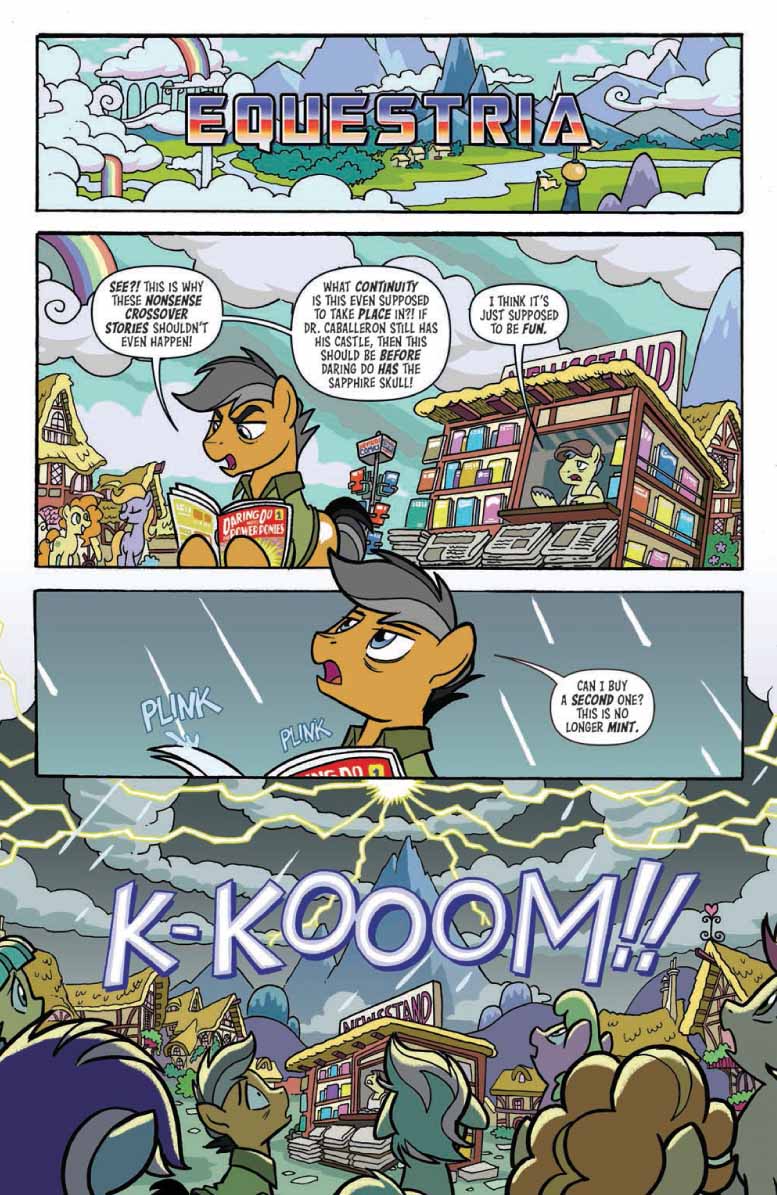 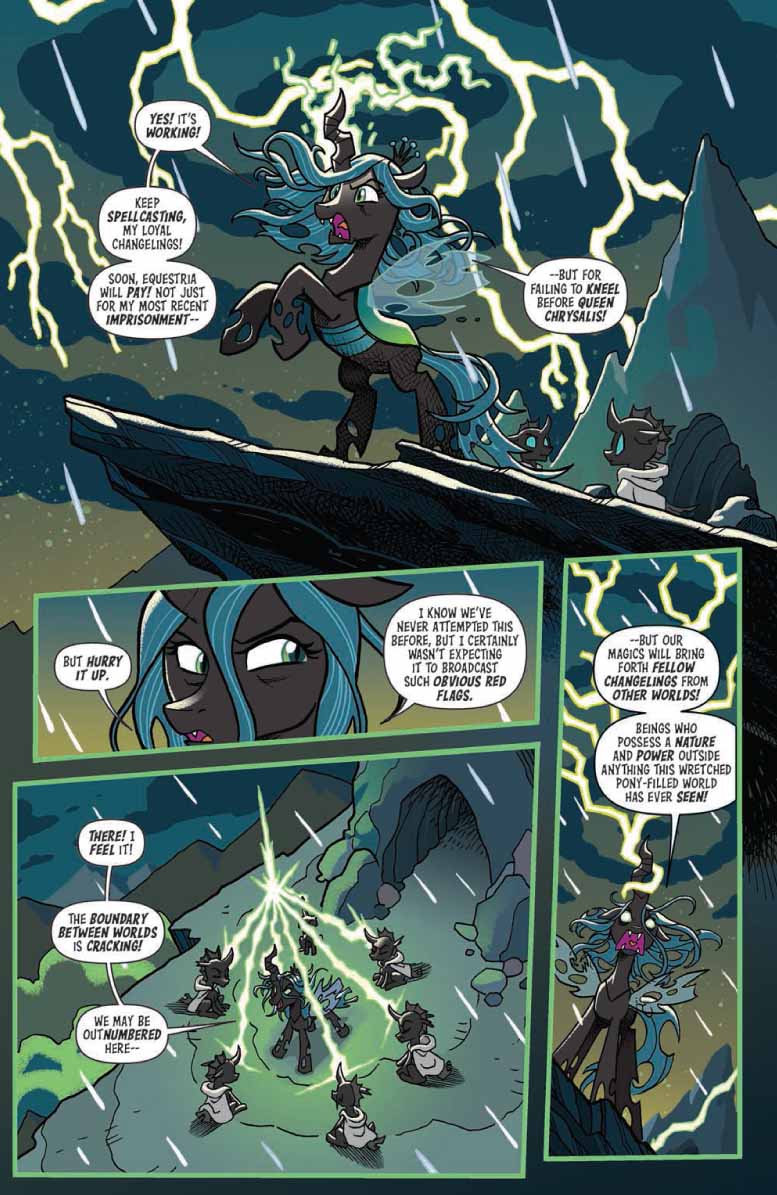 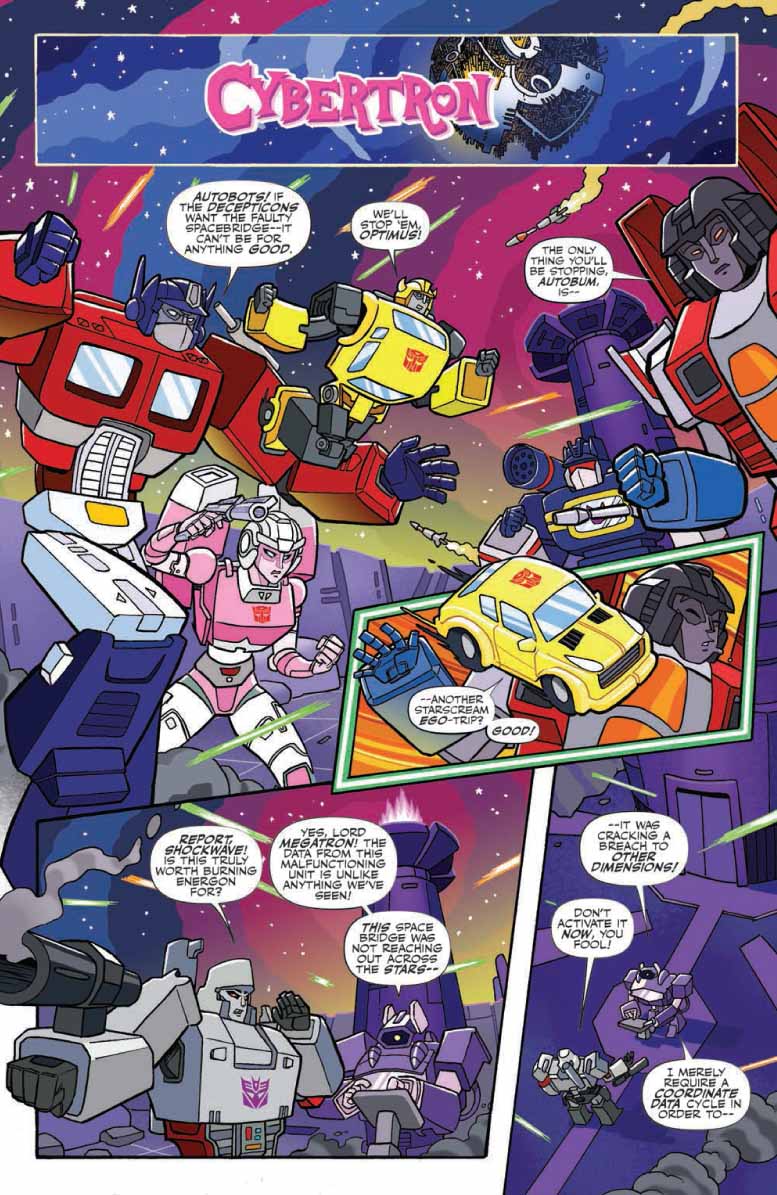 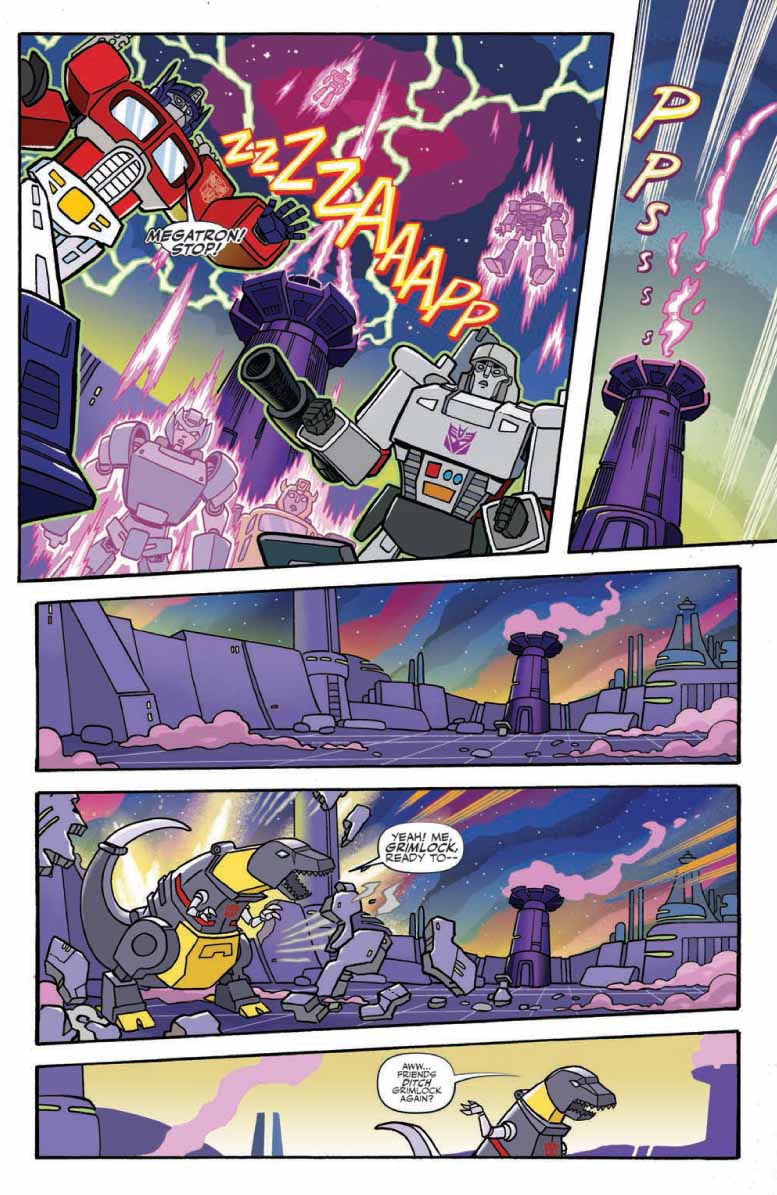 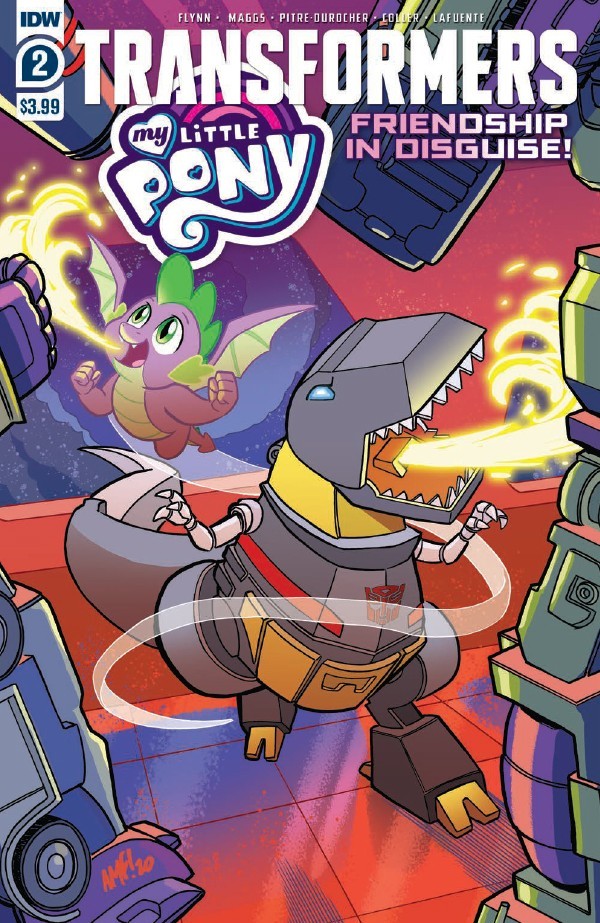 It’s Spike and Grimlock’s time to shine as they take on the Constructicons! Meanwhile, Pinkie Pie is determined to share as much knowledge about Equestrian and Cybertronian cuisine as possible with her new friends… which is why she invites Gauge to her kitchen for a live baking show! But things get a bit too spicy when Shockwave shows up.

My Little Pony / Transformers #2 is out on Wednesday, September 2nd. 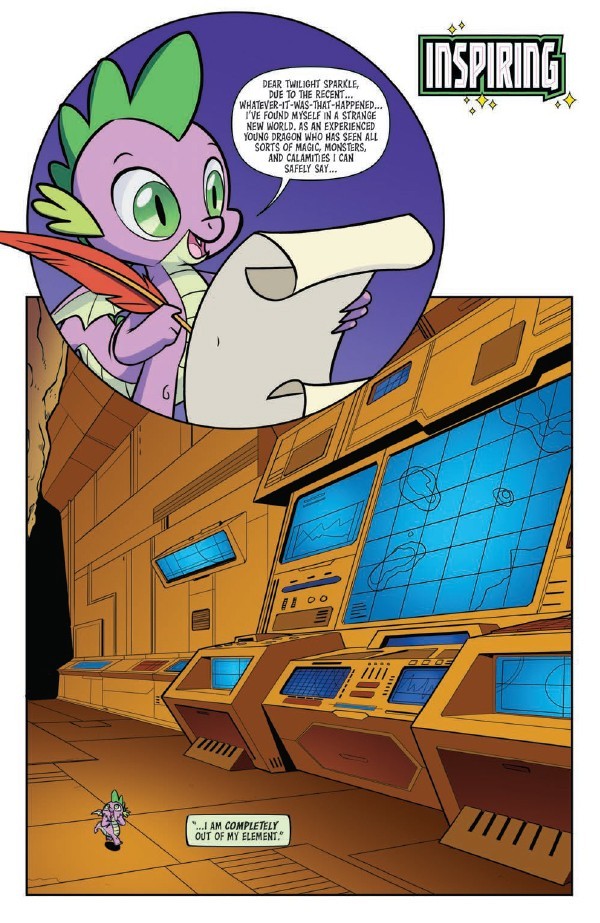 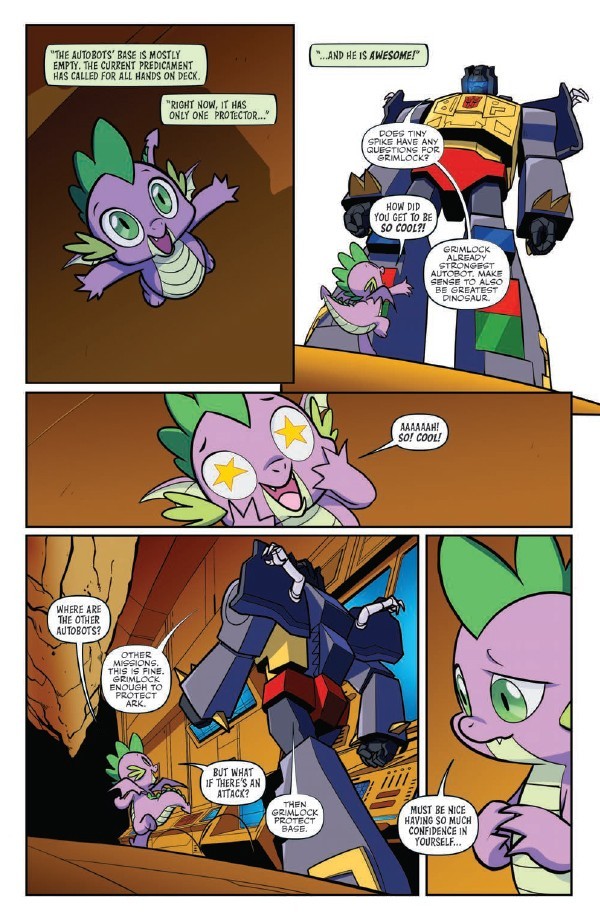 Description: When Fluttershy and Discord’s tea time is interrupted by Soundwave, it’s robot logic vs. whimsical chaos! And Dash, sure that she can fly faster than any Autobot can drive, finds herself in a race with the one and only Windblade – let’s just hope Crasher and his Decepticon friends don’t make things too dangerous. 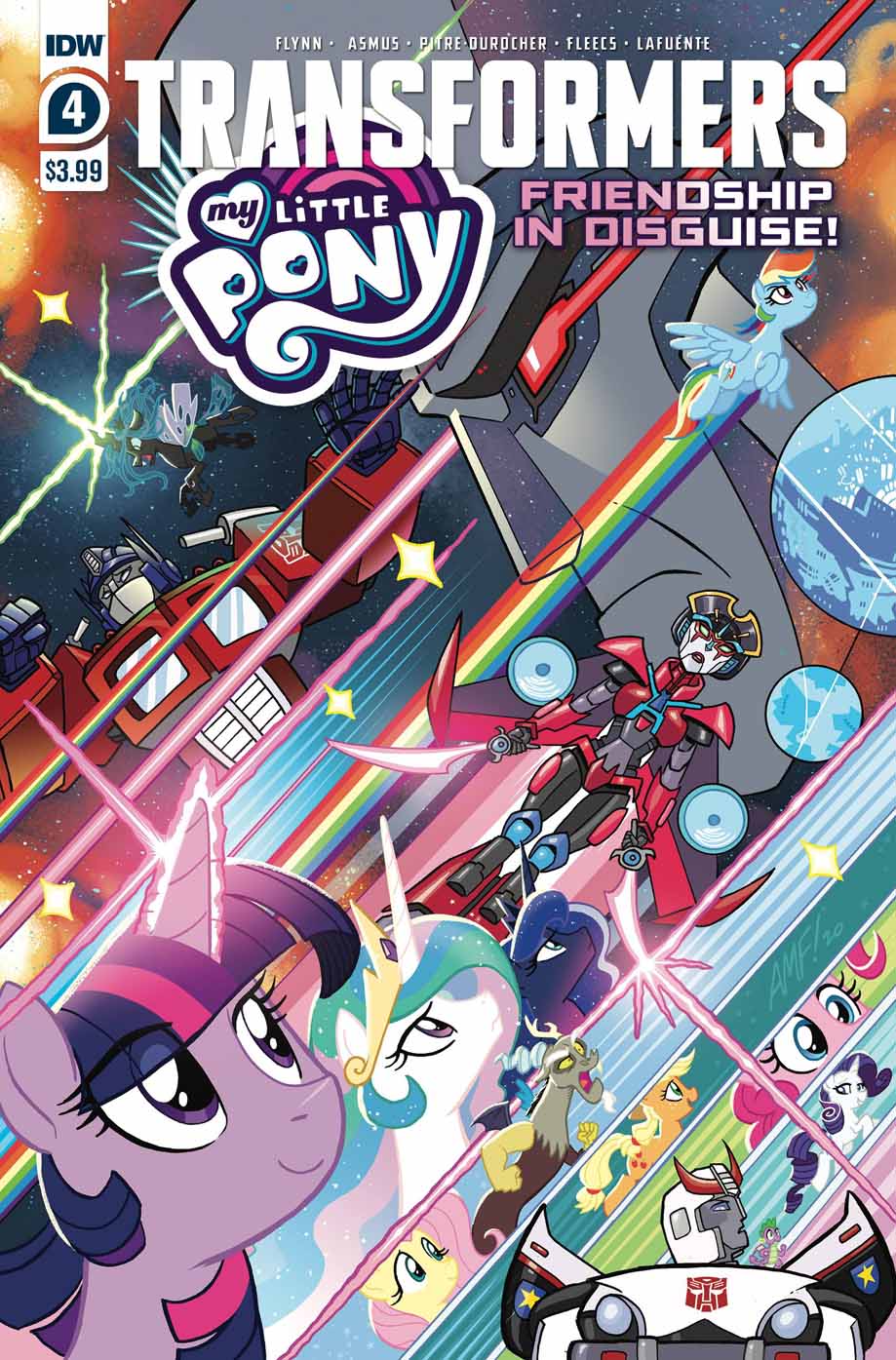 Description: When the Insecticons descend upon Sweet Apple Acres and begin devouring the Apple family’s crop, it’s up to AJ and her siblings to rally to save the farm! Meanwhile, Optimus Prime and Twilight Sparkle finally band together the ponies and the Autobots to get things back to normal. The finale you’ve been waiting for is here! 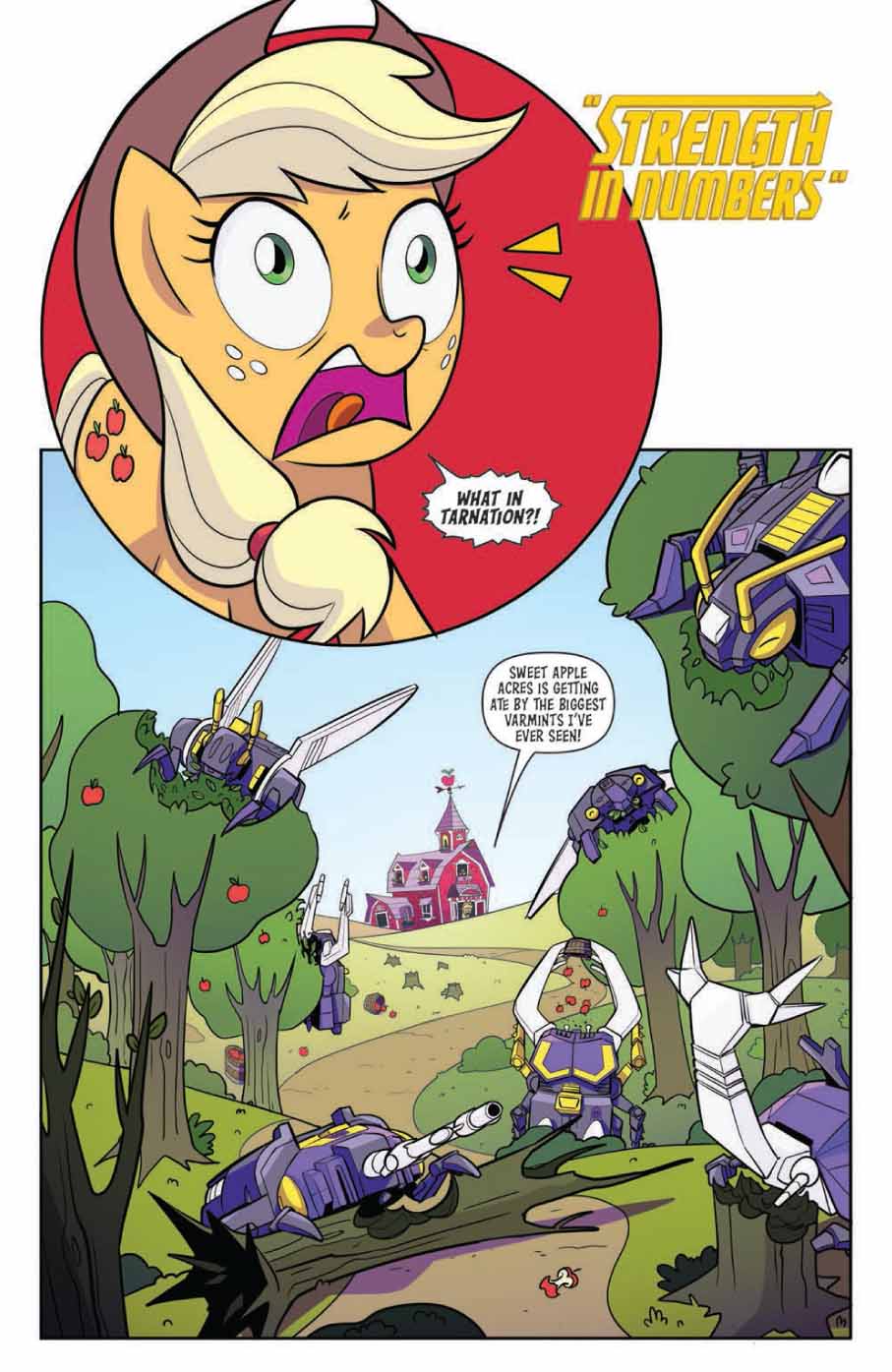 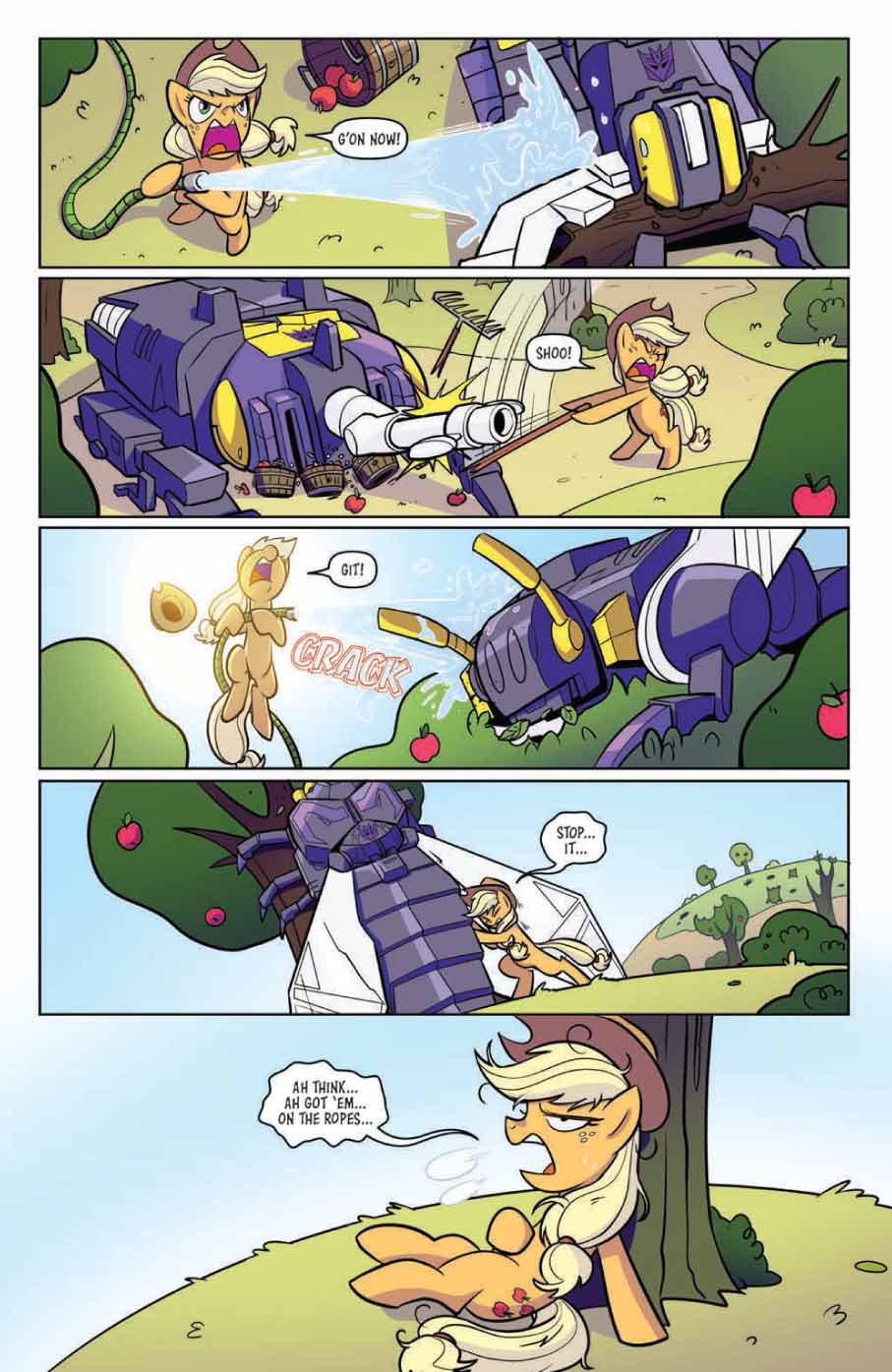