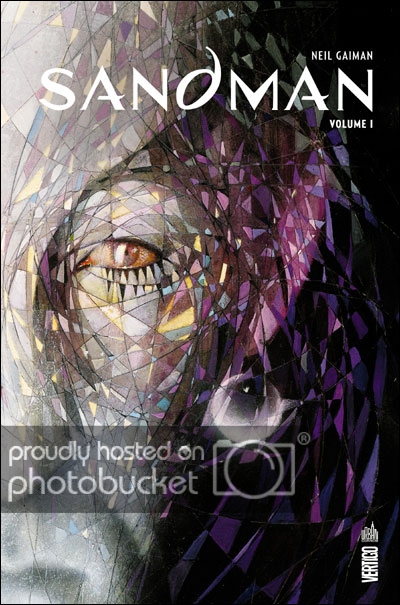 [quote]THE ABSOLUTE SANDMAN VOL. 1
THE SANDMAN, written by New York Times best-selling author Neil Gaiman, was the most acclaimed comic book title of the 1990s. A rich blend of modern myth and dark fantasy in which contemporary fiction, historical drama and legend are seamlessly interwoven, THE SANDMAN is also widely considered one of the most original and artistically ambitious series of the modern age. By the time it concluded in 1996, it had made significant contributions to the artistic maturity of comic books and become a pop culture phenomenon in its own right. Now, DC Comics is proud to present this comics classic in an all-new Absolute Edition format. The first of four beautifully designed slipcased volumes, THE ABSOLUTE SANDMAN VOL. 1 collects issues #1-20 of THE SANDMAN and features completely new coloring, approved by the author on the first 18 issues, as well as a host of never-before-seen extra material including the complete original Sandman proposal, a gallery of character designs from Gaiman and the artists who originated the look of the Sandman, and the original script for the World Fantasy Award-winning THE SANDMAN #19, “A Midsummer Night’s Dream,” together with reproductions of the issue’s original pencils by Charles Vess. Also included are a new introduction by DC President and Publisher Paul Levitz and an afterword by Gaiman.[/quote]

[quote]THE ABSOLUTE SANDMAN VOL. 2
DC Comics is proud to present the second volume of the comics classic THE SANDMAN in Absolute format! The second of four beautifully designed slipcased volumes, THE ABSOLUTE SANDMAN VOL. 2 collects issues 21-39 of THE SANDMAN and features remastered coloring on all 19 issues as well as brand-new inks on THE SANDMAN #34 by the issue’s original penciller, Colleen Doran, and a host of bonus material, including two never-before-reprinted stories by Gaiman (one prose and one illustrated), a complete reproduction of the never-before-reprinted one-shot THE SANDMAN: A GALLERY OF DREAMS, and the complete script and pencils by Gaiman and Kelley Jones for Chapter Two of “Season of Mists” from THE SANDMAN #23.[/quote]

[quote]THE ABSOLUTE SANDMAN VOL. 3
The third volume collecting Neil Gaiman’s seminal, award-winning series starring the Dream King in deluxe format. ABSOLUTE SANDMAN VOL. 3 presents several key SANDMAN tales in a slipcased hardcover edition, including “Brief Lives,” in which the Sandman’s sister Delirium prevails upon her older brother to help her find their missing sibling, Destruction. But their journey through the Waking World has dramatic repercussions for their family and also for the relationship between the Sandman and his wayward son, Orpheus. Also included is the spectacular short story “Ramadan,” a tale of a young king of ancient Baghdad and the deal he strikes with The Sandman to grant his city immortality, with spectacular illustrations by P. Craig Russell (Fairy Tales of Oscar Wilde, The Jungle Book).Never-before-collected bonus features include pin-up pages from galleries in THE SANDMAN #50 and SANDMAN SPECIAL #1, the Desire story from VERTIGO: WINTER’S EDGE #3, THE ENDLESS GALLERY #1, script and thumbnails from THE SANDMAN #50, and a section on the Endless retail products (poster, statues, t-shirts, Little Endless and more)! Plus, an introduction by artist Jill Thompson.[/quote]

[quote]THE ABSOLUTE SANDMAN VOL. 4
This final volume includes behind-the-scenes extras plus issues #57-75 and a story from VERTIGO JAM #1. Don’t miss the end of what Playboy called "a modern myth, as well as a précis on why the stories we tell matter so much[/quote]