The untold story of the Unification War continues! Stranded on an outer moon and with a price on their heads from Alliance bounty hunters, the crew race against time – and the planet’s population – to fix Serenity and hightail it outta there!

BOOM! Studios presents the second of two Firefly Legacy Editions. Collecting all previously released Serenity comics in an all-new value-priced format, no fan can afford to miss this official follow-up to Joss Whedon’s (creator of Buffy the Vampire Slayer) critically-acclaimed film Serenity, collected in one place for the first time! The 'Verse is on the brink of war, and Captain Mal and his crew are on the run from an old, unstoppable foe. With the crew scattered to the far ends of the ‘Verse, it’ll take quite a gamble to pull them back together . . . but when the chips are down, never bet against Captain Malcolm Reynolds! Collects Leaves on the Wind #1-6, “The Warrior and the Wind” from Dark Horse FCBD 2016, and No Power in the 'Verse #1-6.

KLAUS AND THE CRYING SNOWMAN

The best holiday tradition in comics returns in the next chapter of the epic Santa saga by visionary Grant Morrison and Eisner Award-nominated artist Dan Mora! Klaus has to help an absentee dad-turned-snowman make amends before melting away for good. And probably before he’s defeated by a pantheon of Norse Gods and their minions. All in a day’s work for Santa Claus.

THE GREAT WIZ AND THE RUCKUS OGN SC

The Ruckus, a terrible, growing darkness, is creeping over the land. The only hope is a being of light and good known as the Great Wiz, formed out of the Wiz’s of the realm. Red is a blind Wiz tasked with finding the others – and while he finds some, it becomes all too clear that the fate of the world rests on the shoulders of a young Wiz named Bean who is too strong, too hot-headed, and too completely untested to be any real help. It’s a battle of good versus evil in this amazing adventure written and illustrated by Joey McCormick. When heroes and villains come in all shapes and sizes, sometimes, all it takes to truly save the world is one small Bean.

After years of difficulty trying to have children, a young couple finally announces their pregnancy, only to have the most joyous day of their lives replaced with one of unexpected heartbreak. Their relationship is put to the test as they forge ahead, working together to rebuild themselves amidst the churning tumult of devastating loss, and ultimately facing the soul-crushing reality that they may never conceive a child of their own. Based on author Ingrid Chabbert’s own experience, coupled with soft, sometimes dreamlike illustrations by Carole Maurel, Waves is a deeply moving story that poignantly captures a woman’s exploration of her pain in order to rediscover hope.

When Hexley Daggard Ragbottom sets off to find his Uncle Salazar, he expects to find the most powerful wizard of the modern age. Instead, he finds Uncle “Sally” only wants to kick back, relax, and stay clear of any kind of wizard politics. So how is Hex supposed to become a great wizard if all the adults are too lazy to teach him? A humorous look at magic, family and just kicking back.

The Kerry family is being torn apart over their mother’s terrible illness, the deadly Empty Man disease. But when a stranger approaches, promising a cure, they must face how far they are willing to go.

With the summer over, the Badges return to school to maintain their cover as normal children. But this glimpse into the everyday world forces them to confront a life in which they were never recruited.

Though Art is growing stronger in Faerie, she is still hunted, still pursued. When she meets another creature on the run, Art must learn if she is ready to move from prey to protector.

Separated and surrounded by enemies, the kids feel as though they have nowhere to turn… and that’s before they find a mysterious journal, belonging to a survivor named Abraham.

As dark forces coalesce around this new team of Power Rangers, they’re confronted by the sinister enemy who’s been secretly plotting their downfall…and that of the entire universe.

That cover says it all – Trini is the new Red Ranger and Jason is the new Yellow Ranger. And…there might be some other complications too.

PLANET OF THE APES: THE SIMIAN AGE #1

Celebrate over 50 years of one of cinema’s most influential franchises with this one-shot collection of stories highlighting the simian citizens of the world of Planet of the Apes! Featuring stories from both the original films and new series canon, including the life of an Ape Soldier in General Ursus’s army, and a story set before Dawn of the Planet of the Apes, revealing Koba’s early struggles to remain loyal to Caesar.

The war between the Winters and the Cartel continues its bloody rampage. With the terrible power of the Ash behind them, the Winters stand a decent chance. But Ash is not without its dangers, and some of them are already falling to Ash Madness.

The final chapter begins as the Rebel Army begins their assault on Apity Prime, while Claudio and Ambellina find themselves face-to-face with Wilhelm Ryan, while the great battle outside Kalline is in full bloom, and Inferno and Mayo meet face-to-face on the battlefield. Collects issues #9-12.

AJ Styles has regained the WWE Title, only to immediately be thrown into his biggest challenge yet: facing Universal Champion Brock Lesnar in a Champ vs. Champ Survivor Series match!

Long-time frenemies Kevin Owens and Sami Zayn take the spotlight in this new arc. As Hell in a Cell looms, will KO finally corrupt Sami to his side? Also featuring a series of shorts celebrating 25 years of Monday Night RAW. Collects WWE #13, 18-20.

With both Heaven and Hell out for Jack’s head, there’s nowhere left for him to hide. It’s a battle of apocalyptic proportions, but ol’ Jack Burton won’t go down without a fight. Don’t miss the epic conclusion of Jack Burton’s story and the final ride of the Pork-Chop Express Collects issues #8-12.

When Hum learns a terrible secret, his life is thrust into turmoil – nothing will ever be the same.

Delve deep into the world of Jim Henson’s magical fantasy film Labyrinth in this interactive Discovery Adventure! Join Sarah on her quest through the world of the Labyrinth to save her baby brother Toby from the clutches of Jareth, the Goblin King. Help her navigate fantastical locations alongside her companions Hoggle, Ludo, and Sir Didymus. Each page contains dense artwork with hidden treasures waiting to be found as readers rediscover the magic of the iconic film, where everything seems possible and nothing is what it seems.

● The debut graphic novel from 2015 Russ Manning Promising Newcomer Award Winner Jorge Corona. Born covered in black feathers, abandoned as a baby in the slums of the Maze, Poe has lived his entire 11-year-old life hidden away, until he meets Bianca, an over protected girl from the wealthy City beyond the Wall. As danger looms on all sides, a friendship grows between the city girl and the boy covered in feathers…a friendship that may just be enough to bring Bianca home, and lead Poe to his destiny. A heartwarming tale of danger, friendship, and adventure.

JIM HENSON’S BENEATH THE DARK CRYSTAL #5

As Thurma continues to fight for her right to rule, both candidates for the Throne of Mithra begin their training under The Fire That Stays, but they both find out that they have a lot to learn before either of them are fit to be the Ember Queen.

Maria finds herself in a stunning, masquerade ball of her dreams, reunited with her husband at long last. But like all things in the Labyrinth…everything is not what it seems.

Cover Artist: John Allison Synopsis: Stop the presses! Ed Gemmel has a girlfriend. With Christmas looming, it’s time to meet her family – in Australia. Which is fine. Who cares that they’re all Manly Men! Ed once… did something manly. That one time. It happened. It’s going to be fine.

Ed and his girlfriend Nina may have bonded over bone breaks and PT, but now that the casts are off, Nina is going back to her partying ways – making Ed wonder if he ever knew her at all.

It’s the end of second year, and everything is happening so fast! Moving out, breaking up, breaking hearts, breaking…bones? Best-Mates-for-Life Esther, Daisy, and Susan had better hold on tight if they want to make it to their third year, never mind in one piece! Collects issues #33-36 of the series.

All footage from the other side of the Portal has been stolen! When when the thief auctions off information to the wrong bidder, it might be up to Jane and Heather to save him – reluctantly.

When Brenda, hacker extraordinaire, accidently awakens an international jewel thief from the 1969s, she wasn’t expecting to get a new friend. And she might have been right. What she found instead is something better – a partner in crime. And Mia already has a target in mind.

Cover Artist: Maddi Gonzalez Synopsis: As Riot takes Bel on a tour of Wanderland, they are both surprised to see Riot’s sisters, the Bad Royals. Unfortunately, they earned their name the hard way.

LUMBERJANES: TO THE MAX VOL. 5 HC

Strange things are afoot at Miss Qiunzella Thiskin Penniquiqul Thistle Crumpet’s Camp for Hardcore Lady-Types – stranger than usual that is – and the only answer is… roller derby? This series is a story of friendship, hardcore lady-types and kicking a lot of butt. Collects Volumes 9 and 10 of the ongoing series into a deluxe hardcover edition.

Preorder Cover: Naomi Franquiz. Synopsis: It’s almost Jo’s birthday, and for April that can only mean one thing: their yearly birthday movie night tradition! Now, she just has to figure out how to have movie night at camp, with no TV and no electricity! Luckily, though, there’s the rest of Roanoke cabin and yeti friends to help make it happen!

OVER THE GARDEN WALL: HOLLOW TOWN #4

As Beatrice continues to urge Wirt to leave Hollow Town, Greg is unhelpful. Except, after all this time something about Wirt seems off.

After so much time defending the Earth, Steven and the Crystal Gems know the value of teamwork and asking for help. Join Steven on a series of one-on-one adventures with your favorite characters from around Beach City. Writer Grace Kraft and artist Rii Abrego guide Steven and the Crystal Gems as they learn what it means to rely on one another in these all-new stories from Cartoon Network’s Steven Universe. 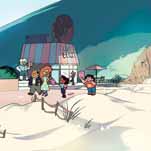 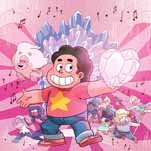 With the location of the last Harmony Core on Earth revealed, Garnet sets out to retrieve it, while Steven and those left in Beach City try to figure out what to do next.

Finn and Jake learn that there is a reason that the three henchmen are so determined to find “precious” objects for Marceline, and it’s not anything good. Hunson Abadeer makes a show!

When pirates infiltrate the Candy Kingdom and steal a precious treasure, Princess Bubblegum must send her most trusted friends to retrieve it. Well, her most trusted friends least likely to dissolve in water. Together with BMO, Marceline sets sail in pursuit as the dread Pirate Queen, where she faces deadly sea monsters and more in her quest to retrieve the Candy Kingdom’s treasure. Marceline and BMO learn exactly what it takes to survive the furious oceans of Ooo!

The Fat Cat returns, as Garfield explores what life is like outside of the friendly confines of Jon’s house. Feeling mistreated and unappreciated by Jon, Garfield embarks on a journey for a new home.