After the shocking conclusion of the last issue, Mal and Zoe must deal with the full consequences of their actions…and whatever else Boss Moon sees fit. But don’t worry, the crew of the Serenity will come together once again…or will they? 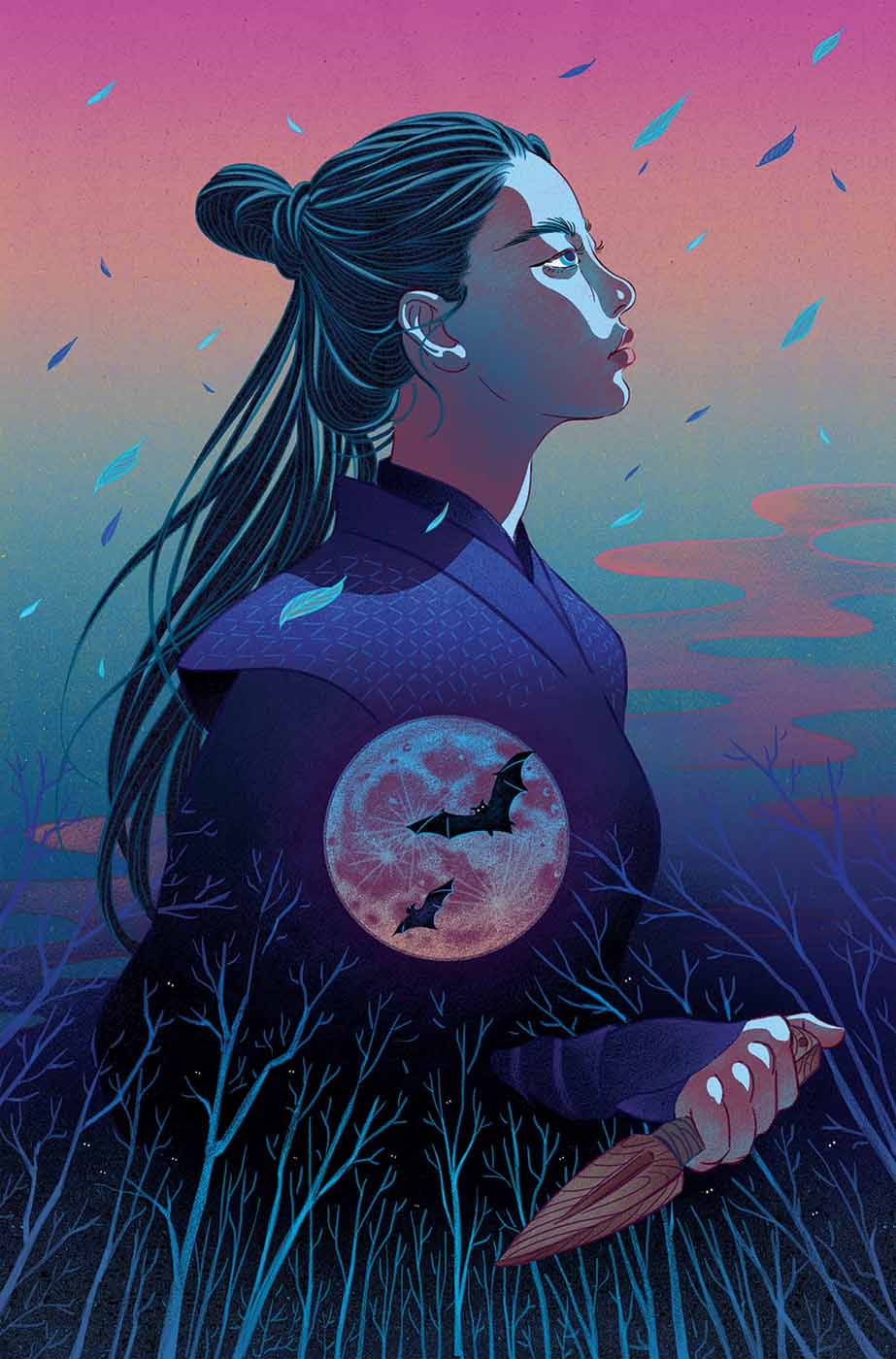 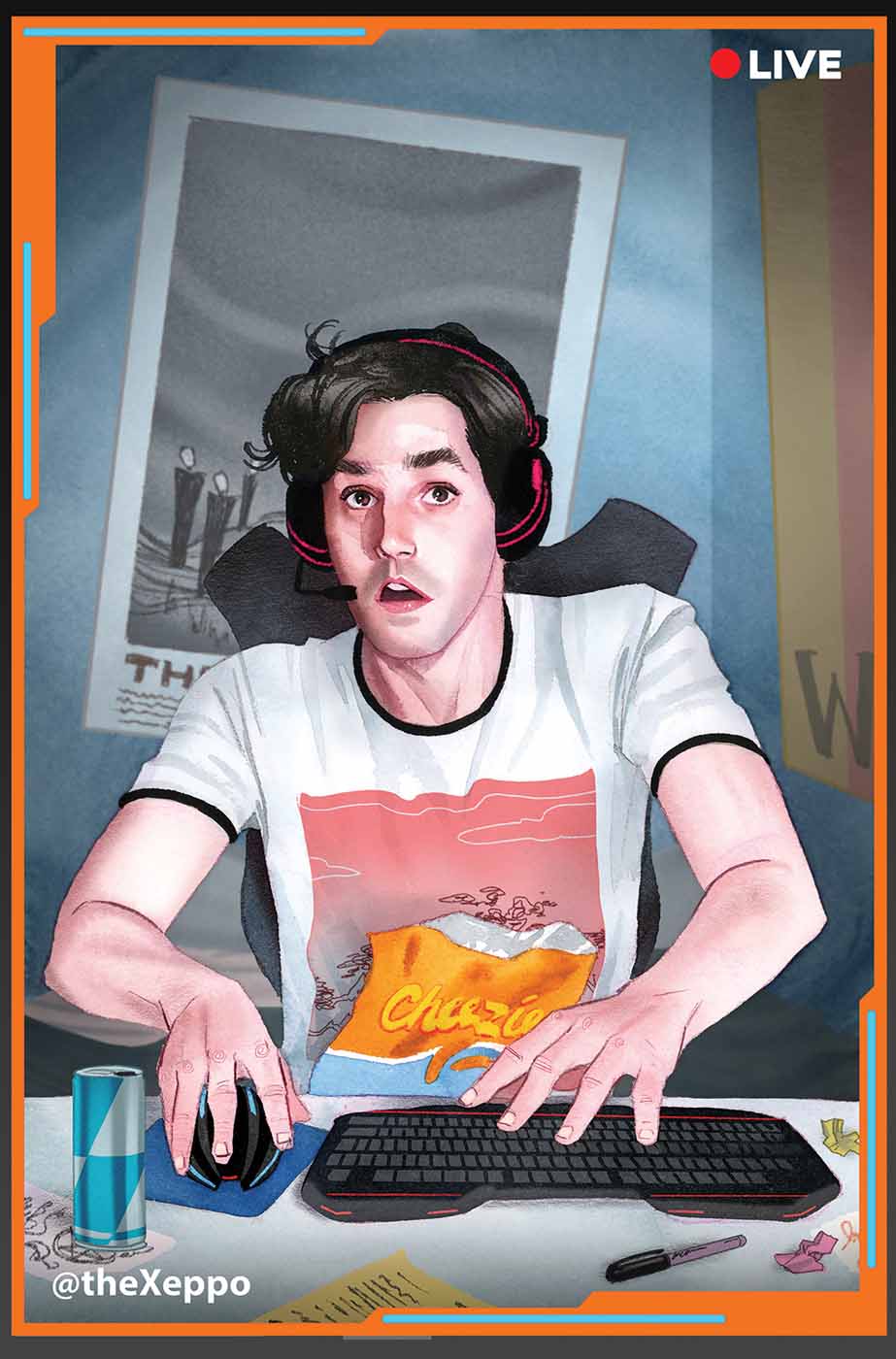 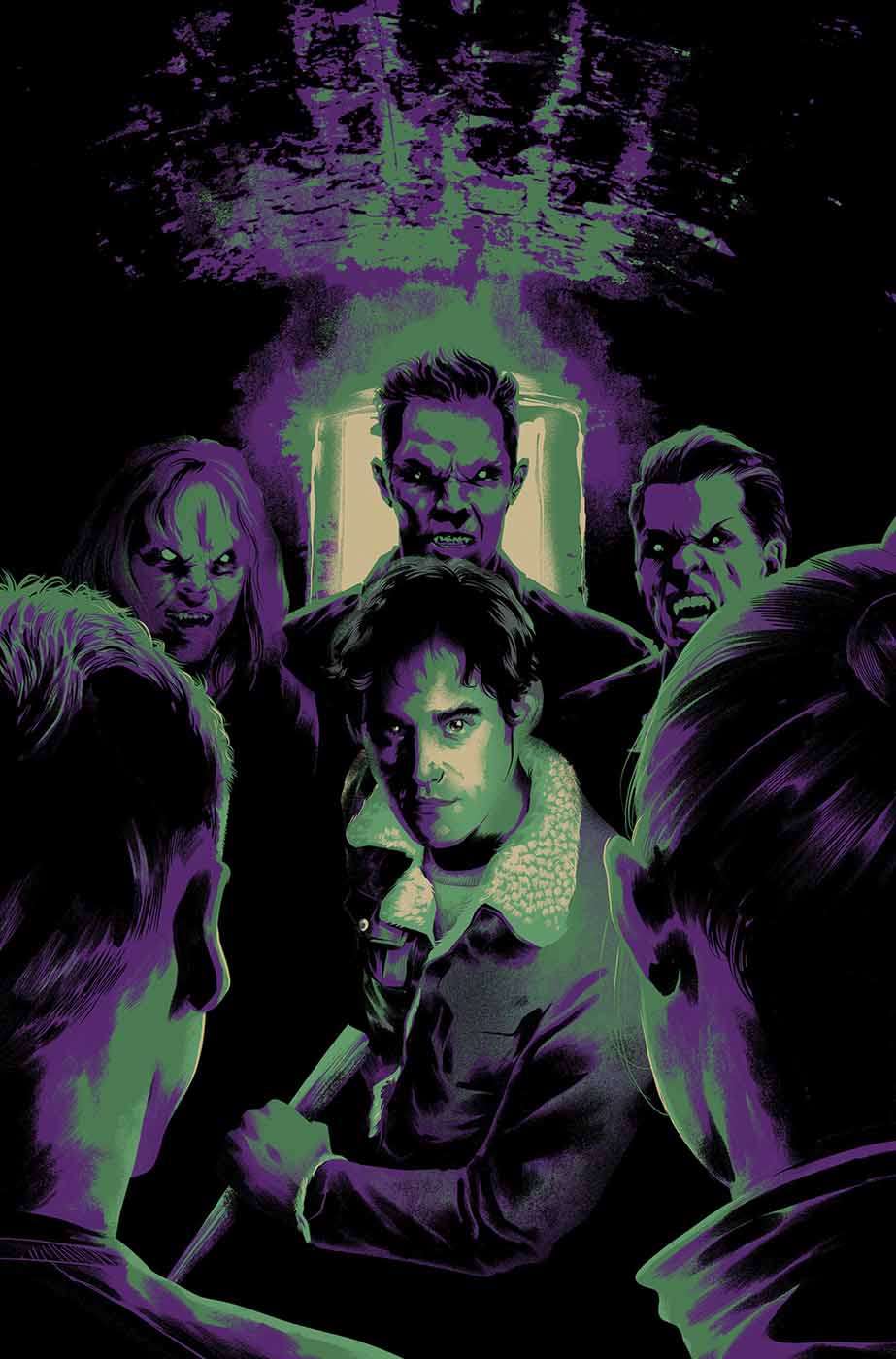 This is the issue no Buffy fan can miss! In the shocking conclusion of the first story arc of the most-anticipated reVAMP of 2019, someone from the Scooby gang must make the ultimate sacrifice. And don’t miss the massive first appearance that will have everyone talking!

Faith. Sex. The Devil. Faith likes to dabble with magic. Her friends think it’s cute – and not just a little off-putting, but it’s part of her charm and her warped search for purpose in a world that makes too much sense. But she’s a true believer and knows there is a power within her reach. She’s right, of course. It just took a while for that magic, that temptation, that unknowable thing to find her . . . In short --â€‹Faith is bored as hell. And Hell has noticed.

Rocko returns in this new limited series for a spooky look at everyone’s favorite wallaby! Something is turning the good people of O-Town into mindless zombies and Rocko wants nothing to do with it. He barricades himself and Spunky in their home and is determined to outlast the hoards outside. But desperate times calls for desperate measures when Rocko’s best friend Heffer becomes infected, Rocko will have to risk it all to save his friends and his city.

Jim Henson’s The Storyteller celebrates four mythic tales of sirens, inspired by folklore from around the world and told in the spirit of Jim Henson’s beloved television series. In this first issue, Polish writer Sztybor Bartosz teams with artist Jakub Rebelka to reimagine the classic Polish folktale “The Fisherman and the Mermaid.” The fisherman is not happy with his life. He works all the time, struggling to make ends meet rather than spending time with his wife and their daughter. One day, while fishing, he hears a mermaid singing and the song overwhelms him with joy. He can’t stop thinking about this song so he captures the mermaid and imprisons her.

At age thirty-five Margaux’s life is full of upheaval and unexpected twists and turns. She’s divorced, raising a child on her own, and trying to get back on her feet in today’s fast-paced world. When romance eventually returns, it takes on the most unexpected shape . . . in that of her best friend! Could things possibly get more complicated?! Plate Tectonics: An Illustrated Memoir â€‹ follows cartoonist Margaux Motin through one of the most transformative periods of her life as she navigates her own heartbreak and subsequent hope with unabashed wit and charm.

Under threat from a mutated horde, the island is forced the cede control to General Sato – and Hana and Kenichi have a choice to make. Torn between protecting their home or standing against a threat to all of humanity, the two warriors find that their differences may divide them yet again.

Luci Jennifer Inacio Das Neves (most people just call her Lucifer) is a supernatural thief forâ€‹hire, stealing wondrous objects from the dark denizens of the netherworld for her mentor/mother figure, Val Brisendine. From possessed teddy bears to haunted paintings to ancient otherworldly demons, Lucifer will need to use every trick up her sleeve to protect her surrogate family and combat the monsters of her seedy city.

Collects all 16 issues of the original â€‹Hexed â€‹limited series and its sequel seriesâ€‹ Hexed: The Harlot and the Thief.

As the armies of Dryfleet, Thundervale, and Ridgetown converge, the former bard Hum may be the only thing standing in the way of a new apocalypse.

Magic was once plentiful and prosperous across the realm – but ever since the Quench brought the world to its knees, magic has become the rarest of resources. Bandits strive for it. Knights die for it. And one antisocial former bard named Hum will ride his mutant unicorn to the ends of the earth for just a drop of it…as magic is the one thing that will save the soul of his wife. Collects issues 5-8.

As the cults around The Empty Man virus gain more power, there may be nowhere that’s safe for the Kerry family anymore.

The secret origin of the Black Badges is revealed! The Black Badge program is a covert ops tradition, passed down through generations…and now we’ll meet the original members. And discover their darkest secret.

When five teenage refugees are stranded in an irradiated Oklahoma wasteland while trying to survive an exodus from the war-torn East Coast, they take shelter in a ghost town that is much more than it seems. The strange, unnatural threats they face there will make them question what they think they know about death, about reality, and especially about family as they learn to rely on each other if they’re ever going to make it to the sanctuary of San Francisco.

Low Road West is a story about coming of age in the throes of war, and carving your own path despite an uncertain future. Collects the complete 5-issue series.

Trading quips and tossing back cocktails, the Doyles take what they want and hoodwink their clientele for the rest. When one night of having a drink (or ten) with friends goes horribly wrong at a haunted house, the Doyles find themselves face-to-face with ancient beings of the blood-sucking variety. Luckily, their blood alcohol content is up for the task. Collects The Thrilling Adventure Hour â€‹#1-4.

Rita Repulsa must go to war to obtain the Green Power coin. But there’s just one problem – there’s one magic user who may be more powerful than her – someone she had hoped to never see again.

The Power Rangers arrive at the home of the Solarix … and learn the shocking secret behind the universe that’s drawn them together!

Celebrating 25 years of Power Rangers, renowned comic book creators from around the world pay homage to the franchise near and dear to their hearts with stories from across the morphin grid, including fan-favorite teams like Ninja Steel, RPM, SPD, In Space and more! And don’t miss the tie-in to the epic event Shattered Grid! Collectsâ€‹Mighty Morphin 2018 Annual â€‹and the â€‹Mighty Morphin Power Rangers Anniversary Special.

Frustrated at Sal’s unwillingness to teach him magic, Hex attempts an ancient and dangerous spell – and it goes exactly as one might expect.

Another World, Another Time…In the Age of Wonder. Experience the incredible magic of Jim Henson’s fantasy epic The Dark Crystal â€‹adapted by A.C.H. Smith and personally overseen by Jim Henson. Featuring unpublished illustrations by legendary illustrator Brian Froud and the production design team at Jim Henson’s Creature Shop, as well as Jim Henson’s never-before-seen notes on an early draft of the adaptation detailing his vision for the fantastical world of Thra.

It’s heist time! A hacker, a thief, and enemies around every turn. What could possibly go wrong?

Heather, Jane, and their increasingly improbable team come face to face with the terrible truth of Spectrum – and with the people who are responsible for it all!

It’s time for Esther to finish her final dissertation “The Liminal Spaces Of The Great American Novel 1959-1980,” but when inspiration dries up, she heads home to Tackleford for Easter. It’s not America, and it’s not 1959, but her now deserted small town is beginning to feel distinctly liminal.

The final year of university is about to start for best mates Daisy, Esther, and Susan, and everything is going completely off the rails. From finding somewhere to live at the last minute, to broken bones, to the looming terror of the adult world, this semester is one you won’t want to miss. Collects Issues #37-40 of the series.

â€‹Everything is going great! Charlie is on the team, and the Avant-Guards are on a winning streak, taking the liberal arts sports scene by storm. It’s more impressive than it sounds. However, that winning streak is all at risk when they face off against the Selfies of the American Institute of Internet Influencers.

When the Roanoke scouts run into a mysterious and dangerous creature in the woods, they barely escape with their hides. Heart pumping and dizzy with adrenaline, Mal decides that she needs to work on being braver. More proactive. A girl of action! A hardcore lady-type! And she’s going to doit all by herself, because that never goes wrong.

Simon and his Ice King persona are fighting for dominance, and if Simon wants to keep control, he’s going to have to face truths he’s long buried, and come to terms with his own guilt and regret.

Jake invited himself to the fancy party of his estranged brother Jermaine. Jermaine and Jake have nothing in common, with Jermaine being the prim and proper type to Jake’s wild side, but they’ll have to put their differences aside if they want to save the evening!

Cartoon Network’s Emmy Award-winning series continues in â€‹Adventure Time Season 11â€‹ – the only place to get new, official Adventure Time stories! Return to the Land of Ooo after The Great Gum War and join Finn and Jake on all-new adventures. Together, along with Princess Bubblegum, Marceline, BMO, and all your favorite friends, they’ll rediscover what it truly means to be the protectors of the realm. Collects issues #1-4

Steven and Connie finally get to Lars and the Off Colors, where they discover everyone is in a coma-like state. It’s up to Steven and Connie to save them, but it may be worse than itappears! Lars and each Off Color are trapped in hallucinations that show them their greatest fears and each have to overcome them to get free.

The Fat Cat returns for fun (and food) for all seasons, in this collection of sensational seasonal stories. As the gang heads to the beach to soak up some rays, Jon and Liz hit bumpy waters, navigating a breakup just as a giant shark approaches. After the waters have calmed, Garfield and Odie audition for a reality show, and Garfield encounters nemeses old and new: a spooky ghoul who reaches out from the TV, and the fan-favorite Lasagna Monster. Collectsâ€‹Garfield 2018 Vacation Time Blues #1â€‹and Garfield 2018 TV Or Not TV? #1.

Twenty-five years after the epic battle between Pops and Anti-Pops, Mordecai, Rigby, and the rest of their friends return to the park for a reunion! Their crazy youth is nothing but a memory…or so Mordecai and Rigby think. It’s not long before these two friends stumble across a secret fairy world, find themselves young again, and have their children stolen by Viceroy Alberich, the Fairy King. Now 25 years younger, Mordecai and Rigby must work together to reform Alberich’s miscreant children if they want their own returned to them. Collects the complete 6-issue series!