The intercepted voice transmission has been interpreted – a dire warning . . . but is it too late? As the crew continues to survey the massive pyramid structure, they find an entrance. Who goes in, won’t come out alone . . .

THE ART OF RICK AND MORTY VOLUME 2 HC & DELUXE HC

This full-color hardcover artbook showcases the third and fourth seasons of the animated science-fiction adventures of everyone’s favorite alcoholic scientist and his grandson! Rick and Morty are back, baby! They never even left! Reruns, dog! Streaming! Anyway, grab your portal gun and get back to exploring the creation of this beloved TV series with its comical characters and their interdimensional counterparts, wack-a-doo aliens, and far-out locations. Dark Horse Books and Adult Swim offer anotherÂ peek beneath the creators’ curtain withÂ TheÂ Art of Rick and MortyÂ VolumeÂ 2.

Dr. Queen, scientist extraordinaire, is on the cutting edge of technology, industry, and – with the help of her telepathically controlled super car – terrorist butt kicking. But when things go south in her attempt to take down a hacking supervillain’s diabolical plans, Queen finds that the lines between truth and fiction are blurred, and she’s drafted into a war to save reality itself.

After defeating the evil dictator De Nomolos in Bogus Journey in 1995, things aren’t looking as excellent as they should for either Bill and Ted or Wyld Stallyns. There’s tension in the band and worry at home. Bill and Ted’s obsessiveness with writing the one song to bring peace to the world is affecting their playing and their relationships with their families. The band is losing favor with fans and the future isn’t shaping up as they were all led to believe it would from past (and future) events. Desperate for a solution Bill and Ted burst in to announce their great idea to revive the band’s fortunes: A world tour to spread the love – and the rock, and the love of the rock – to the world.

BIOWARE:Â STORIES AND SECRETS FROM 25 YEARS OF GAME DEVELOPMENT HC

From BioWare’s isometric role-playing roots to its intense space operas and living worlds, chart the legendary game studio’s first 25 years in this massive retrospective.Â See what it took to make games in those wild early days. Pore over details of secret, canceled projects. Discover the genesis of beloved characters and games.Â Includes never-before-seen art and photos anchored by candid stories from developers past and present.

BLACKWOOD: THE MOURNING AFTER #4

The Dark Wisdom conspiracy is revealed as the traitors make their move, and a sentient mass of interdimensional organ meat invades Dean Ogden’s funeral. Making matters weirder, Chimp Ho Tep is on the loose and out for revenge, even if it means harpooning a student or two. The fur flies – as does the flesh – in the fiery finale of our four-issue frightfest. Phew!

Supernatural detective Cal McDonald, found wandering the streets as a disheveled vagrant, is ripped from his self-imposed retirement to resume his monster-killing career. But Cal is reluctant to return to the fray. What has the hard-bitten investigator so shaken? It’s a long story that begins with a beautiful woman who happens to be a vampire . . . and ends with a bang. Collects the four-issue miniseries.

What do a flirtatious bard, a clueless barbarian, a naÃ¯ve druid, a pair of stealthy twins, a holy cleric, and a vengeful gunslinger all have in common? They’re not sure either, but one day they’ll become the heroes known as Vox Machina! Follow the main characters from the smash-hit series Critical Role as they team up for the first time, facing cults and curses in the revelation of their origins and the path that will lead them to glory . . . eventually.

The hit series Critical Role: Vox Machina Origins returns in this hardcover collection of series I and II, with ever-before-seen artwork!

Nadia, an assistant EMT for a privately-owned business known as Trauma Team International, is the sole survivor of a failed rescue mission turned shootout. After she agrees to continue work for an upcoming extraction mission, Nadia and her new team find themselves in an even more dangerous and life-threatening situation.

The conclusion! Not only must Komaru defeat the remaining children of the Warriors of Hope, but also the last-ditch weapon of the adults . . . the massive Big Bang Monokuma! Does a horribly ordinary high school girl have what it takes to stop this mutually assured destruction between two generations . . . ?

Despair is contagious . . . and so is death! Fed up with the lack of bloodthirst from his captives, Monokuma infects them with the Despair Disease. Afraid they could commit murder while not in their right mind, the sick students are quarantined . . . but the killing hasn’t stopped! The conclusion of Danganronpa 2: Goodbye Despair.

Pursuing his humanity in the unlikely company of arctic adventurers, the « monster » Frankenstein unwittingly becomes the pawn of an ancient cult! Meanwhile, unbeknownst to him, he’s been recognized as Viktor Frankenstein’s creation by a powerful local man whose influence might see him arrested . . . or worse! 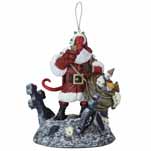 Santa isn’t the only big red guy that loves the holidays! Now you can celebrate with Mike Mignola’s Hellboy. Based on the limited-edition Holiday Hellboy game piece from Mantic Games, this fully painted 3.75" x 3.25" ornament can be hung or displayed on a flat surface. The hell-iday season is here!

The Hellsing Organization is under siege by the undead Nazi army of the Millennium Project, who are turning the London streets into rivers of blood. And with this murderous conflict at a fever pitch, the Vatican sees an opportunity to take down both Millennium and Hellsing in one swift stroke!

Our heroes face internal peril as one of their magical members struggles to learn a necessary spell from the grimoire, and unknowing police attempt to stop them from saving the world.

In these four essential Gaiman tales, a group of friends search for a mysterious circus that is either a dream or nightmare, a string of bizarre occult events befall strangers from all walks of life, a woman is given the gift of a Harlequin’s heart, and a young boy is followed by monsters and regrets that last a lifetime. Collects the full graphic novels The Facts in the Case of the Departure of Miss Finch, Likely Stories, Harlequin Valentine, and Troll Bridge in a single deluxe hardcover volume.

Murder, passion, and criminal enterprise are presented here at their darkest, directly from the most talented writers and artists in crime comics! In these thirteen pitch-black noir stories, you’ll find deadly conmen and embittered detectives converging on femme fatales and accidental murderers, all presented in sharp black and white by masters of the craft.

Explore every corner of Orsterra with the help of this complete guide which includes insight and explanation of the main narrative as well as boss strategies for each of the games’ eight protagonists! Dive deeper with detailed environment maps, subquest information, and beautiful illustrations that fully realize Octopath Traveler’s HD-2D graphics with exclusive explanations and commentary from the development team.

Dark Horse Books and Square Enix present a faithful localization of the original Japanese volume, offered in English for the first time! Whether you’re a first-time player or looking to take your game to one hundred percent completion, this guide book is not to be missed!

When seemingly hostile Krill ships cross into Union space, the Orville intercepts. Captain Mercer learns they are en route to a planet that left the Union decades ago under mysterious circumstances. Scans have discovered a moon-sized construct above the planet, and the Krill intend a preemptive strike against the presumed weapon. But is it?

With mayor-hopeful and once-superhero Tex Reed in the clutches of a homicidal maniac, both the police and the violent vigilante Skulldigger are one step behind and on a collision course with disaster.

Super spy Nora Freud (no relation) has a plum assignment. She’s stationed on a tropical island. Her mission? Keep an eye on things. Her problem? The island is on the lip of the Bermuda Triangle, where anything can happen. Her other problem? This particular island is a den of intrigue, populated by spies, tourists, and evil villains set on global domination.

Dustin arrives at Camp Know Where to navigate the new social hierarchy without the support of his Hawkins adventuring party. While also faced with nerdy bullies, a new menace haunts the young scientists and camp counselors. A mysterious figure with sinister intent arrives to disrupt the serene woodland scene. The solution won’t take rocket science, but Dustin will have to get on the same wavelength as the other campers before tensions reach a boiling point.

TALES FROM THE UMBRELLA ACADEMY: YOU LOOK LIKE DEATH #1

The first The Umbrella Academy spin off series! When 18-year-old SÃ©ance gets himself kicked out of the Umbrella Academy, and his allowance discontinued by Hargreeves, he takes to a place where his ghoulish talents will be appreciated – Hollywood. After a magical high on a vampire-drug-lord’s stash, Klaus needs help, and doesn’t have his siblings there to save him.

A massive, 700-plus-page, full-color hardcover chronicling the quintessential toys of He-Man, She-ra, and the other Masters of the Universe! This compendium is the perfect addition to any toy fan’s collection. By the power of Grayskull, you have the power!

WILL DESTROY THE GALAXY FOR CASH TP

With the age of heroic star pilots and galactic villains completely killed by quantum teleportation, the ex-star pilot currently named Dashford Pierce is struggling to find his identity in a changing universe. Then, a face from his past returns and makes him an offer he can’t refuse: take part in just one small, slightly illegal, heist, and not only will he have the means to start the new life he craves, but also save his childhood hero from certain death.

What could go wrong? If you need to ask – you don’t know Dashford Pierce.

THE WITCHER 3: THE WILD HUNT

More exciting products from one of this generation’s most acclaimed RPGs. These enamel pins and keychains are inspired by the iconic characters that wear them.

The School of the Wolf 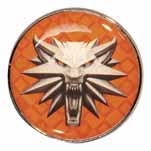 The most recognized Witcher school and the training grounds of the white wolf himself, Geralt of Rivia. Witchers that proudly display this symbol are known for their professionalism and reliability in monster slaying. 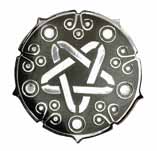 Representing a symbol of magic, this medallion is as iconic as the woman that wears it. Geralt’s true love: the beautiful and deadly sorceress, Yennefer of Vengerberg.

Proudly proclaim you are « Team Triss » by displaying the medallion of the legendary Temerian sorceress and intimately close friend of Geralt, Triss Merigold of Maribor.

After meeting his robotic 277-year-old self, Max learns about the incoming threat of the Ultimate Nihlist, a villain determined to take all life to its « Pre-Big Bang » status, leading Max and the robot to travel through different timelines to protect reality and mankind.