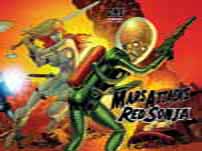 She is the red-haired she-devil with the sword. They are the green-skinned invaders from the red planet. Yes, those dastardly Mars Attacks Martians are attacking again, and these are the Martians of old, the Martians of the Hyborian Age. And so, it’s up to Red Sonja to stop the attack. But how will steel and strength and savagery stand again laser guns, sci-fi technology and weird, weird Martian science? Only one way to find out! Buy this freakin’ book!

Batten down the hatches! On the Caribbean island of Saint Gorda, where a « sensually tropic fantasy » film’s being shot, a massive storm approaches, throwing the film production into chaos, just when Bettie’s getting her break with a big new role! Now communication’s out, everyone’s thrown into close quarters…and then, the murder…

« A Children’s Crusade. » Hyrkania’s food stores are empty. The king of Khitai has the ability to save them, but he will not. But what he has not considered, is that to save her people, Sonja The Red will do anything.

« Numerology, » Part Three: Tensions come to a boil as search parties fail to locate two missing boys from the City of Sacred, leading the state police to conduct a house-to-house search of the impoverished town of Ashthorne which enrages both human and supernatural residents. The leader of the enigmatic vampire terrorists known as The Six forges a pact with Lilith while the township gathers to make an appeal to Vampirella to stave off a certain bloodbath if The Six succeed in radicalizing the peaceful vampires of Ashthorne.

Seducation of the Innocent continues! In a misguided effort to help her daughter, Lilith attempts to make a believer out of the skeptical Doc Chary. Meanwhile dissention breaks out among Vampirella’s deadliest enemies, and Vampi gains a determined young acolyte.

Butcher risks a collision course with Mallory, as he exploits a voice on the inside of Vought’s latest superhero operation. But his memories of Becky make the dangerous game he’s playing all the more difficult. Hughie, meanwhile, is pushing his luck in another way entirely.