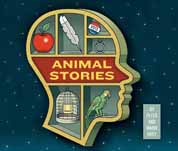 What separates us from animals? What connects us? Award-winning cartoonists Peter and Maria Hoey probe these mysteries across six surreal and interconnected stories.

After tremendous acclaim for their series Coin-Op Comics, two brilliant creators present their first graphic novel: a menagerie of wild tales. Pushing the boundaries of their dazzling and unique narrative style, Animal Stories weaves together six short stories exploring the mysterious relationships between humans and other animals.

A girl who keeps pigeons starts receiving messages from a new bird in her flock. A ship’s crew rescues a dog, only to find far stranger things in the sea around them. A reincarnated cat with criminal intentions, a parrot who leads a revolution, and a squirrel who tempts a woman in a beautiful garden glade.

The epic conclusion is at hand… can Bermuda and her friends survive?! Can THE WORLD even survive?! The door between dimensions is finally open, thanks to the science of our world, and the sorcery of Bermuda’s. Now both worlds are threatened, and the only hope for either is the brave 16-year-old island adventurer known as Bermuda!

The prelude to the much-anticipated video game Baldur’s Gate III begins here! Changed by their experiences in Avernus, Krydle, Shandie, Delina, Nerys, Minsc, and Boo return home to Baldur’s Gate to find that something much more insidious has taken rootâ€¦ what could be behind the odd behavior of the Head Librarian of the Knowledge-Hold?

So you’ve been recruited into the world’s most elite fighting force for freedom. You’re one of the best of the best warriors the planet has to offer. You’re ready to join the fight, but before you step onto the battlefield, you first have to step intoâ€¦ the PIT.

See what the first days of a brand-new JOE are like through the eyes of newbies Multo, Black Hat, and Sherlock. This month it’s time to (you guessed it)â€¦ spotlight: the newbies!

You think you’ve seen it all, but these stories reveal never-before-told adventures of your favorite heroes and villains. Plus, join the JOEs on a different type of adventure, a murder-mystery!

In « Untold Tales, » take an extended look behind some of the most important moments in G.I. JOE history through the eyes of some of your favorite characters. Join Snake Eyes, Scarlett, Stalker, and Torpedo in a desperate mission to Crucial Abysmia; experience the counter-assault in The Pit with MP Law and his sidekick, Order; feel the frigid temperatures of Fusenland with Snow Job, Blizzard, Iceberg, Cover Girl, Frostbite, and Lowlight; fly with Ace and Slip Stream on a mission against the Terror Drome; and be wary of the bespectacled, beautiful, brilliant, and bombastic Baroness!

Then, in the aftermath of the chaotic events of « Snake Hunt » (Volume 24), the JOEs are in a tough spot with the brass in Washington, D.C. Called to testify before a confidential sub-committee intent on investigating the off-the-books mission, a small group of JOEs find themselves embroiled in an entirely different kind of investigationâ€¦ the murder/mystery kind, featuring brand-new JOEs Sherlock, Multo, and Black Hat in « Murder by Assassination! » Collects G.I. JOE: A Real American Hero issues #276-285.

In this Marvel Classics Two-In-One, we follow Spidey on dual adventures with a couple of super special guests! In « The Chameleon Strikes, » Spider-Man goes to enlist in the Fantastic Four, mistakenly believing that they make a salary. Then, Spidey finds himself in hot water – and a head-on collision with action!

A brand-new Pony adventure begins here, encompassing generations both old and new when G1 and Friendship is Magic collide! A long time ago, an evil witch named Hydia sought to destroy pony-kind. Now her granddaughters, Grackle and Dyre, are back to finish the job!

With the School of Friendship overloaded with students, Starlight Glimmer and the Mane Six reach out for help. Enter: Violet Shiver, Shadow Storm, and Black Belle! But these ponies aren’t quite what they seem; in fact, they’re working for Grackle and Dyre! With their sights set on revenge and a brand-new Smooze on hand, the young witches and their dastardly creations are ready to cause some mayhemâ€¦

The road to #50 continues here! Enjoy a 10-issue long adventure leading up to the epic showdown in milestone issue #50. This is not a drill! In « Trial by Fire, » part two by Evan Stanley, a forest fire threatens the ecosystem and the campers – luckily, Amy, Tangle, Jewel, and Belle are there to help! The heroines must overcome their differences and work together to save the day.

Return to the Mirror Universe of The Next Generation with this brand-new series from writers David and Scott Tipton, where familiar faces and exciting new surprises await around every corner! To conquer the Mirror Universe, Captain Picard must first seize control of the ship-building planet of Faundori! The only problem? Faundori is inside Klingon-Cardassian Alliance territory.

Commanded by Luke Skywalker, Rogue Squadron tangles with the Empire in the Outer Rim, but the young Jedi has more than Imperial TIE fighters to deal with. New recruit Myra Chimor just won’t listen to orders. Can the hot-headed pilot learn how to fly as part of a team or will her need to go it alone lead to disaster? Cavan Scott joins Manuel Bracchi for the beginning of a two-part X-wing adventure, « Squad Goals. »

Then, in « Bubo’s Adventure, » by Anne Toole and Nick Brokenshire, Ree-Yees has lost Jabba the Hutt’s beloved pet, Buboicullaar! Explore every inch of the filthy Hutt barge with Ree-Yees as he races to find Bubo before Jabba can toss him off the ship!

Join Cavan Scott, Francesco Francavilla, and a host of classic Star Wars artists in the epic conclusion to the Vader’s Castle saga! Star Wars Adventures: Ghosts of Vader’s Castle is a horror-packed, star-studded, five-week event guaranteed to haunt your dreams. In the final Vader’s Castle tale, Lina, Hudd, Skritt, and Jaxxon race to Mustafar to save Milo and Crater. Will the group be able to fight the ghosts that still haunt the castle, or will the galaxy forever be bound to suffer from the wrath of the Ghosts of Vader’s Castle?

Experience the excitement and thrill of the epic Star Wars movies in this young-reader friendly adaptation of Episode II! In the midst of galactic unrest from the growing Seperatist movement, Jedi Master Obi-Wan Kenobi and his Padawan, Anakin Skywalker, are dispatched to protect Senator PadmÃ© Amidala after a failed attempt on her life. What follows is a mission stretching to the farthest corners of the Outer Rim. Master and apprentice will discover a plot that threatens the entire Republic and see their loyalties – to the Jedi and each otherâ€“tested like never before. Can Anakin protect those he loves, and can Obi-Wan prevent the outbreak of all-out war? Capturing the galaxy-spanning action of Attack of the Clones, experience Episode II as a beautiful graphic novel combining the epic wonder of Star Wars with streamlined, young-reader friendly designs.

The Padawan are off on another mission! This time to Takodana, to assist the lone Jedi defending the local Jedi temple against the ever-growing threat of the Nihils. But Qort has trouble focusing when he comes face to face with his own past amidst new dangers and old allies.

Follow former Jedi turned saber-for-hire monster hunter Ty Yorrick in this mini-series. The time has come – Ty has reached the Gretalx layer and now she must do what she does best: slay the beast! But during the battle, her rusty Force powers trigger a cave in, trapping her and Drewen with the monster. As the Gretalax and Rock Weavers close in on the pair, Ty feels an unexpected presence in the Force…

The fallout from the confrontation between the Mutanimals and the TMNT continues with many questioning what direction Mutant Town is headed for. While the Turtles discuss their new path forward, Hob begins to set his sights on a new target: Baxter Stockman!

The Turtles’ best friend April is always ready to uncover new danger and help her mutant pals! Dig into this oversized collection and discover the very best April stories from across multiple TMNT publishers!

A thorough look back at the TMNT’s comic book origins from their earliest stories with insightful annotations from co-creators Kevin Eastman and Peter Laird.

Rediscover the underground roots of Teenage Mutant Ninja Turtles with this special collection of 29 short stories created between 1985â€“1989, handpicked by Kevin Eastman. With over 250 pages of mutated-martial arts action along with annotations full of original story notes, preliminary art, personal photographs, and more following each story, this volume is perfect for fans to relive the glorious days of the Turtles’ origins as well as an excellent place for new readers to see where the TMNT phenomenon began.

« Sea of Rust, » part three! The Autobots are outnumbered and surrounded in Termagax’s base with Decepticons on one side and the most deadly Cybertronian environment on the other. With an incredibly powerful artifact on the line – one that could turn the tide of the war in their favor – can the Autobots withstand the siege?

« Thicker Skin. » The Predacons begin their hunt for other fallen protoform pods, containing potential reinforcements in their quest to crush the Maximals. But Skold, the Predacon powerhouse, is left behind because she’ll slow the mission down, at least according to Terrorsaur. When Skold encounters a pod on her own, it’ll be up to her to bring it to the Predacon’s side… or put it down for good.

Celebrate 25 years of Beast Wars! The Maximals and the Predacons are back in this all-new series.

In the beginning came the beasts, and all that creeps, crawls and flies – but nature lies, they’re robots in disguise!" With this one line a whole new generation of Transformers toys and fans was created. Now, 25 years later, an all-new series brings your favorite characters back!

In the future, the planet Cybertron belongs to the scientific-minded Maximals and the action-oriented Predacons! When a crew of Predacons, led by the successor to the Megatron name, steals a golden disk and a ship capable of traveling through time, it’s up to Optimus Primal and his Maximal crew – Rattrap, Rhinox, Cheetor, and new character Nyx – to catch them!

Shattered Glass isn’t your average Transformers taleâ€¦ « Shards » is the story of the ongoing battle between the power-hungry Autobot autocrats and the freedom-fighting Decepticon laborers. Join author Danny Lore in exploring this fractured alternate universe just before it shatters. In #3, Starscream seeks out more Decepticons to prevent another war that could destroy Cybertron, but memories of the past haunt every step. As the Autobots close in, Starscream must decide between peace for his planet and his former best friend.

Out in the Cybertronian colonies, good entertainment is hard to find. Fortunately, there’s always the Wreckers – brave Cybertronians broadcasting death-defying stunts and action – all as a cover for undercover operations! When the only event bigger than a new Wreckers broadcast, the Speedia 500, a race for governmental control of a whole world, is threatened, the Wreckers have a new mission: Save the most viewed race in the galaxy… without getting caught. Wreck & Rule!

Ransom, Part 2 (of 3). Kiyoko has been kidnapped and is held for ransom by Boss Hasegawa. He wants the ledger of bribes that Kitsune had stolen. Usagi, Yukichi and Kitsune know they would be walking into a trap, but they find aid from a very unexpected source. Or do they? How far can they trust someone they know will betray them?

One of Usagi’s most classic and epic adventures reaches its penultimate chapter! As a castle is sieged to prevent a revolt against the shogun, Usagi and friends must make a desperate gambit to prevent the land from descending into war. Not everyone will survive the mighty struggle that ensues!