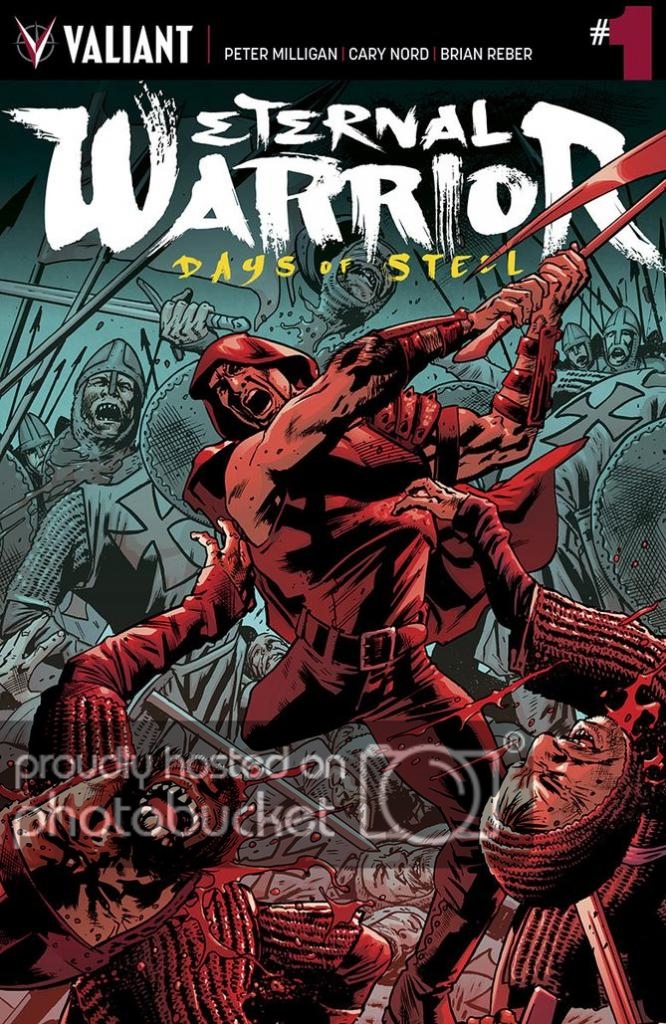 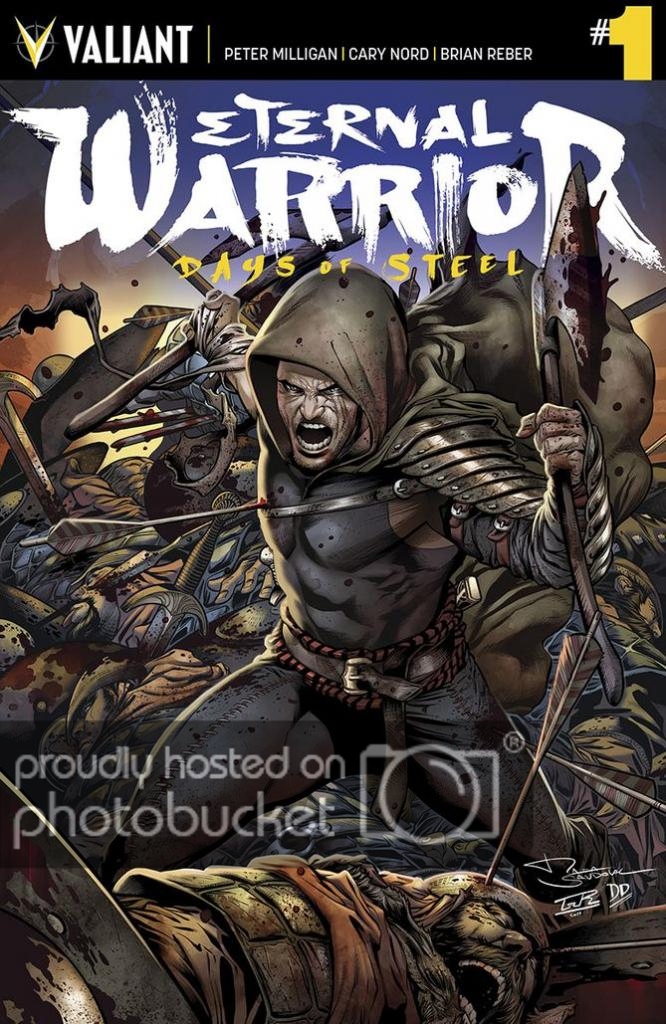 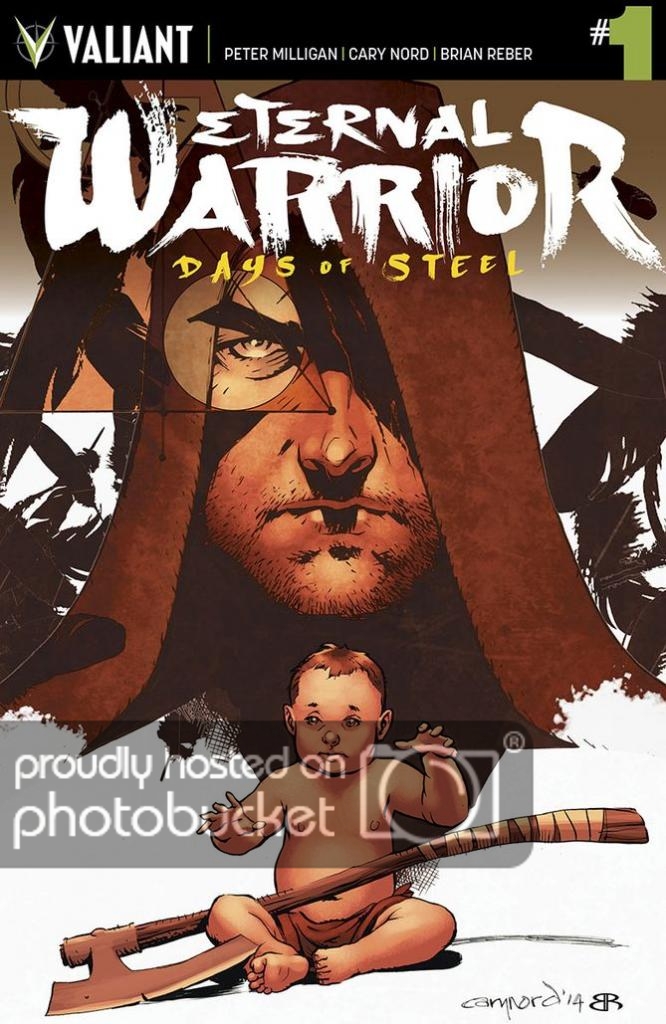 ** ETERNAL WARRIOR DAYS OF STEEL #1**
Written Peter Milligan, art by Cary Nord, covers by Bryan Hitch, Rafa Sandoval, Cary Nord.
The Eternal Warrior…Gilad Anni-Padda, the Earth’s Fist and Steel…is forever charged with guarding the Geomancer and securing the Earth’s safety. After completing another brutal mission, the Earth’s undying guardian is approached with a cryptic task: fi nd and save a baby – in whose hands might rest the fate of an entire people. But the Eternal Warrior is no nursemaid…and, to complicate matters, a thousand Magyar invaders want the baby dead. At the edge of civilization, can history’s most expert killer keep one precious life alive?
32 pages, $3.99, in stores on Nov. 5. 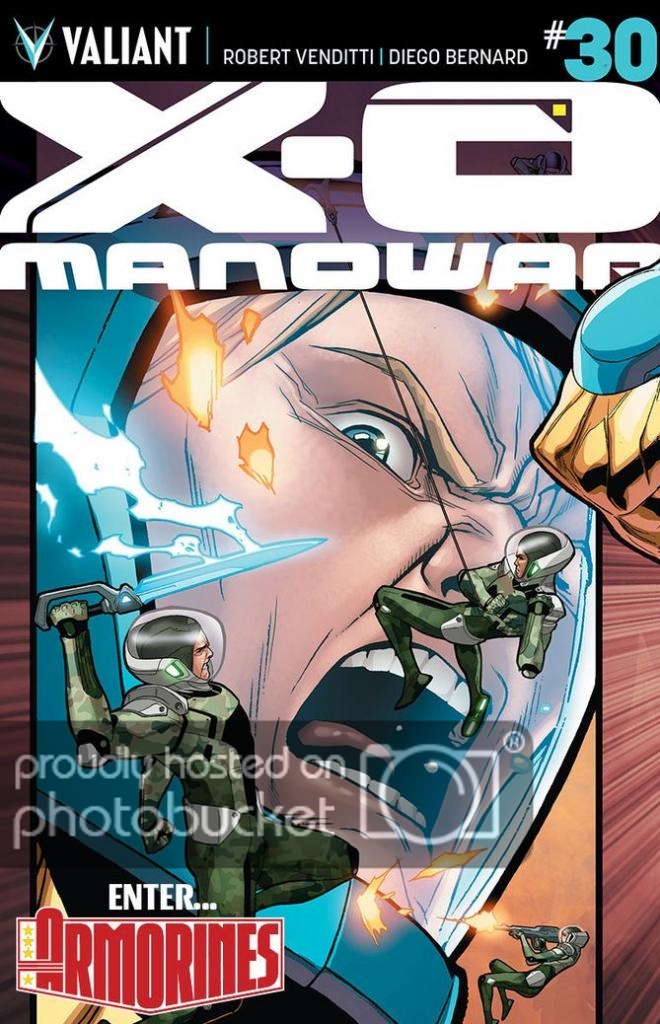 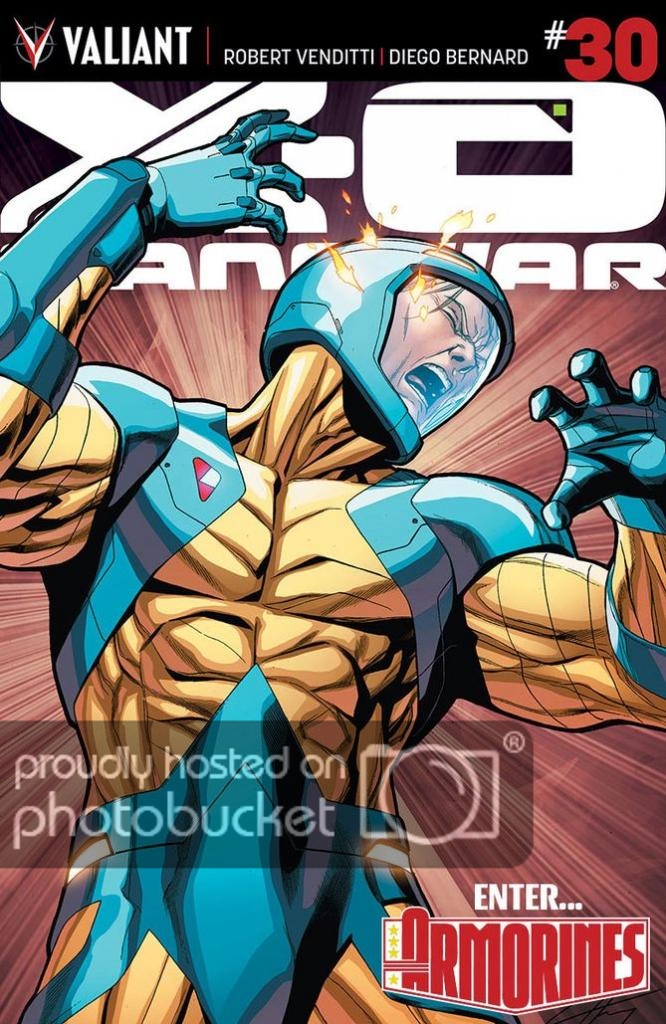 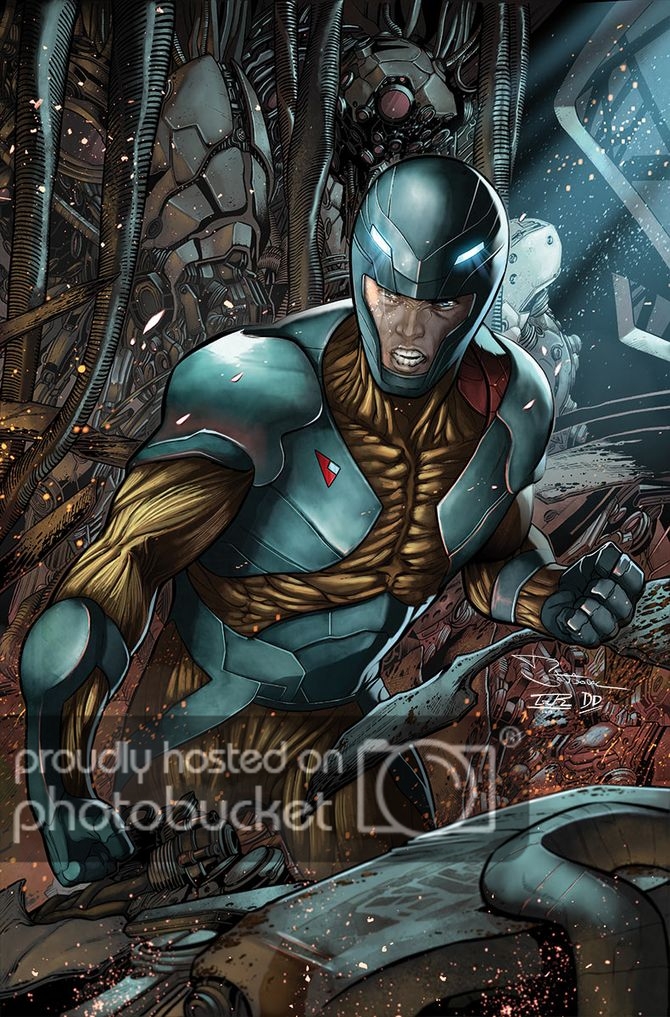 X-O MANOWAR #30
Written by Robert Venditti, art by Diego Bernard, covers by Clayton Henry and Rafa Sandoval.
Armor Hunters was only the beginning! Now, still reeling from his harrowing encounter with the Armor Hunters, Aric of Dacia might face a new threat â€“ the calculating paramilitary force known as the Armorines! Armed with an array of astounding abilities far beyond the capabilities of the X-O Manowar armor, has this bleeding-edge commando unit come to save Aric’s kingdom…or grind it into dust? Find out as Valiant superstars Robert Venditti and Clayton Henry unleash a pivotal new chapter in the saga of X-O Manowar!
32 pages, $3.99, in stores on Nov. 19. 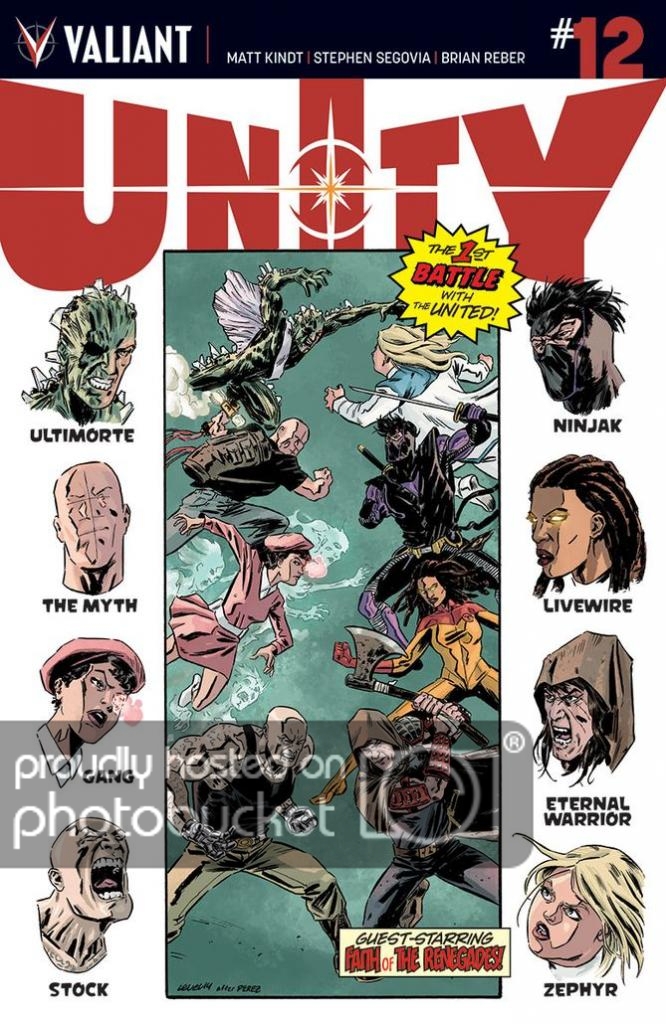 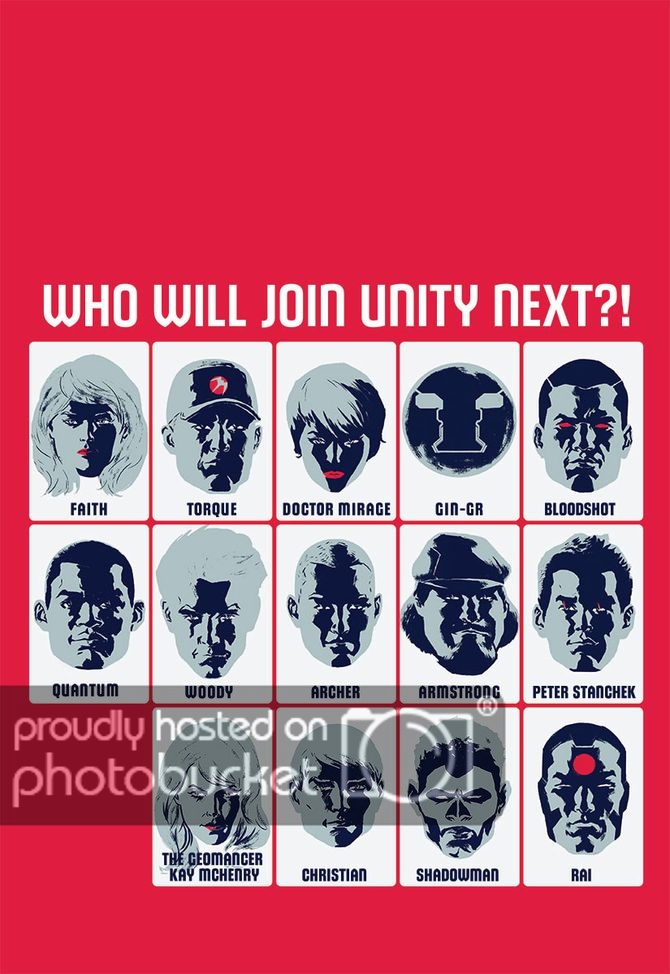 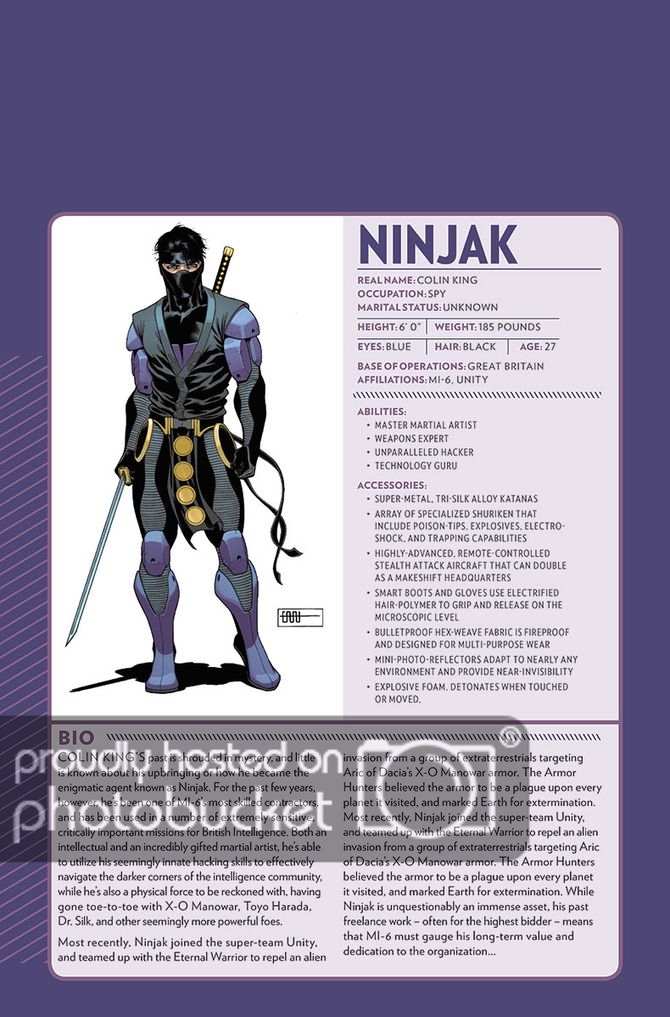 UNITY #12
Written by Matt Kindt, art by Cafu, covers by Brian Level, Cafu, Raul Allen.
A new day has dawned for the elite assemblage of heroes called UNITY, and, in the wake of the Armor Hunters’ invasion, the time has come to grow their ranks. Who will be the next fearless hero to join the roster of the world’s most elite superteam? And just what is the international strike force called THE UNITED - and why have they marked UNITY’s own X-O Manowar, Ninjak, Livewire, and Eternal Warrior for elimination? Red-hot creators Matt Kindt and CAFU detonate the planet’s first Superteam vs. Superteam war right here with a bold new beginning for UNITY!
32 pages, $3.99, in stores on Nov. 12. 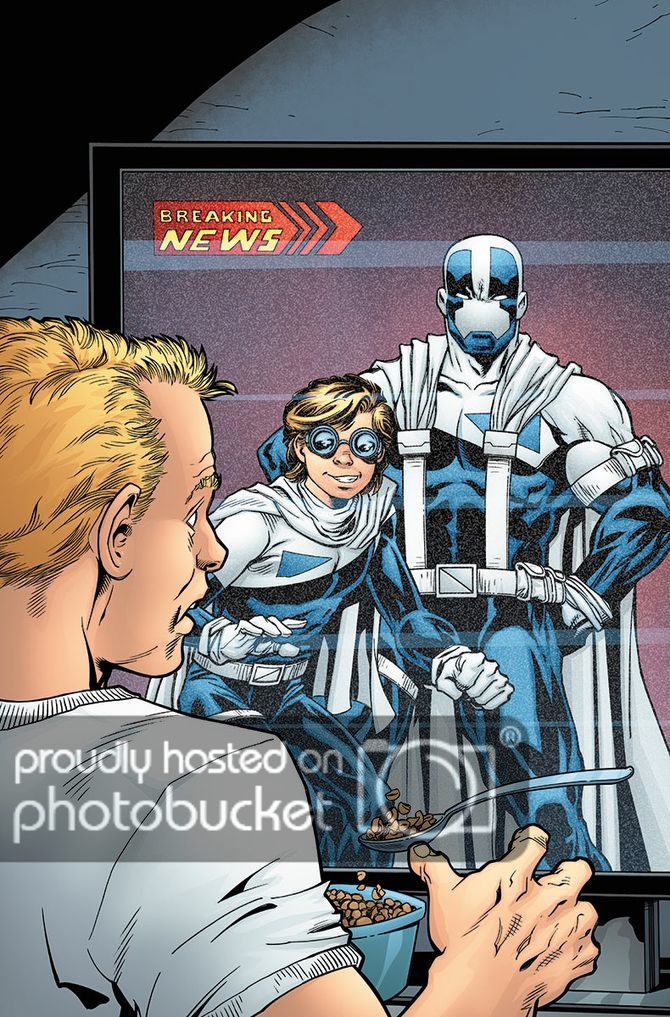 Q2: THE RETURN OF QUANTUM AND WOODY #2
Written by Christopher Priest, art and cover by M.D. Bright, variant covers by Tom Raney, Bart Sears.
Quantum and Woody are all over the news â€“ but Eric Henderson and Woody Van Chelton are retired…and officially getting too old for this ish. There’s a NEW Quantum and Woody in town…they’re still not a couple…and the mystery behind their existence threatens to destroy what little is left of Eric and Woody’s one-time partnership. As a sinister secret organization besieges our heroes, will Woody unlock the secret of the new Quantum and Woody in time to save them–and will Eric let him?
32 pages, $3.99, in stores on Nov. 12. 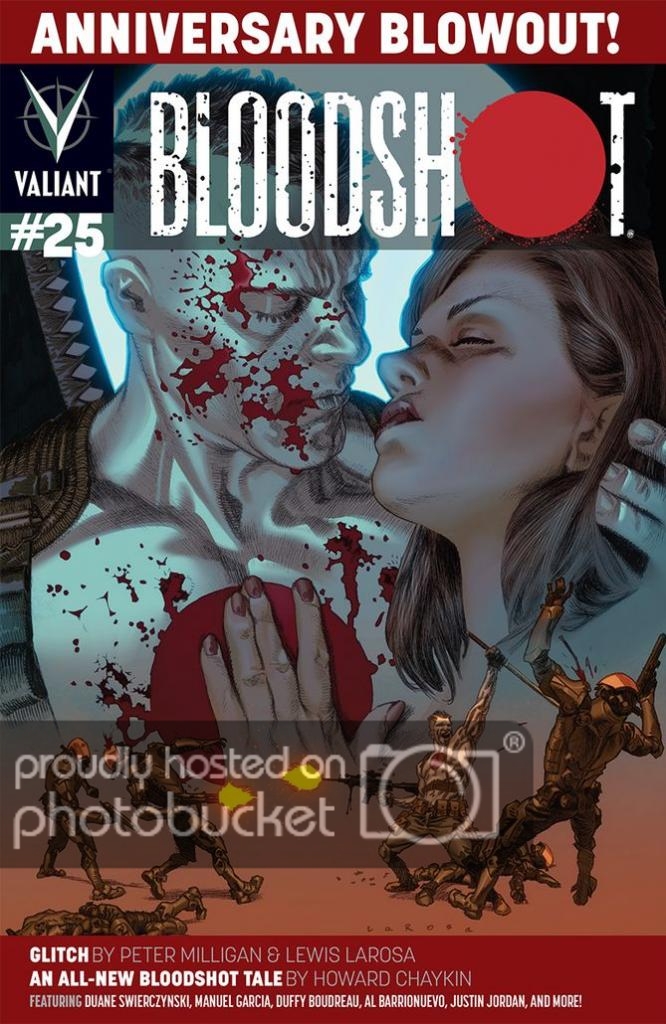 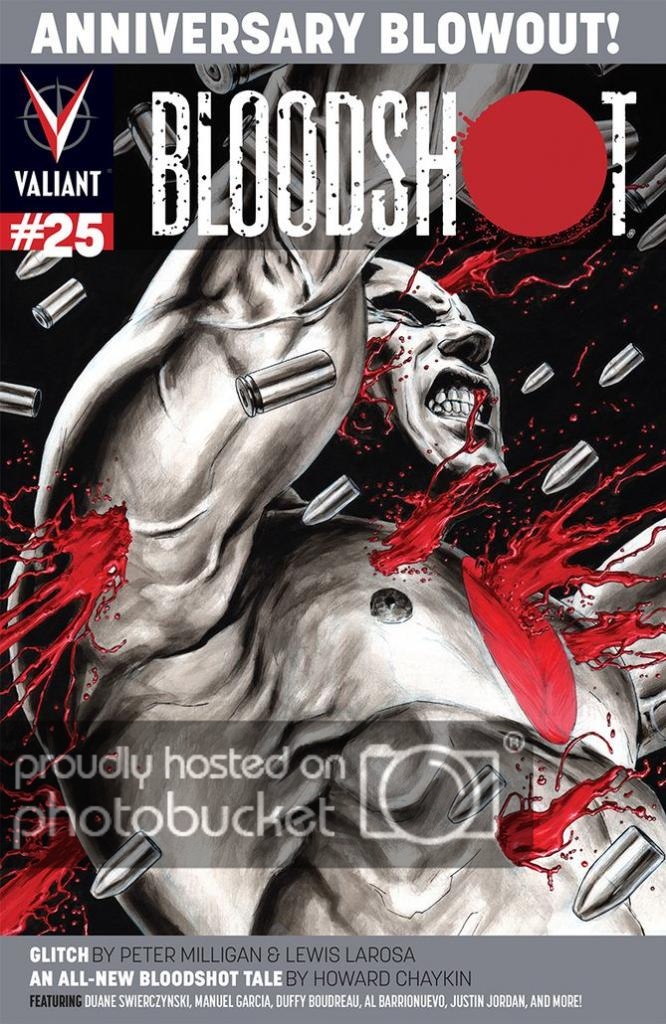 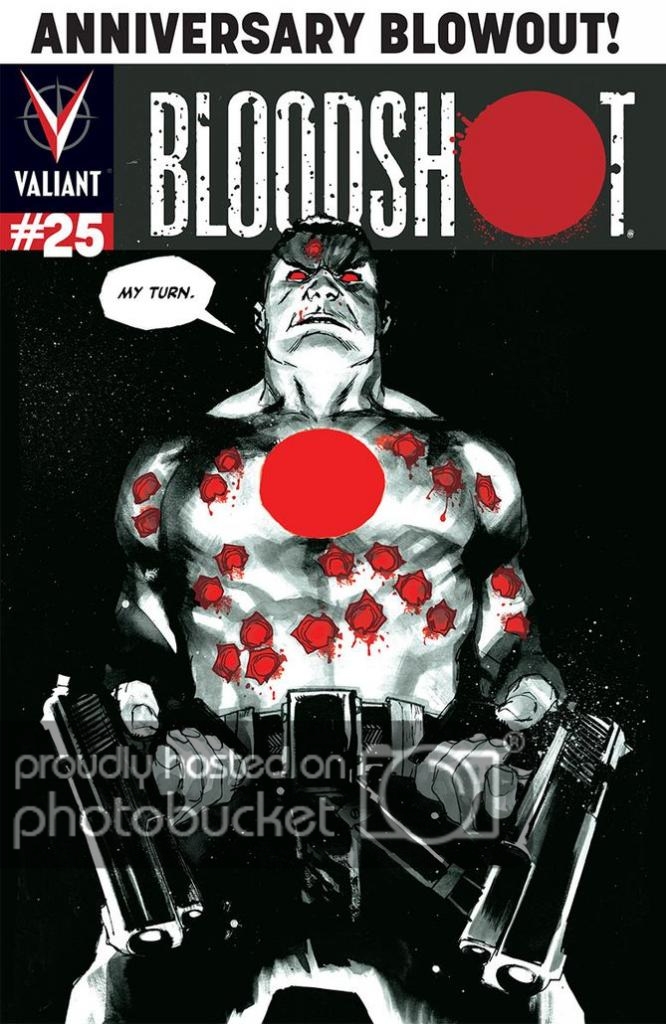 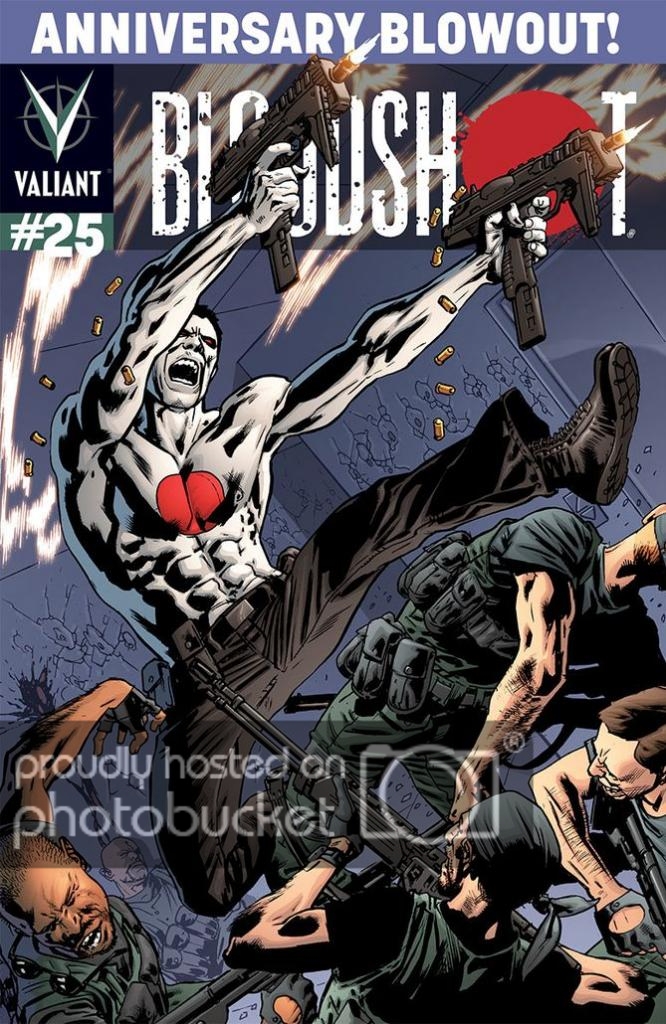 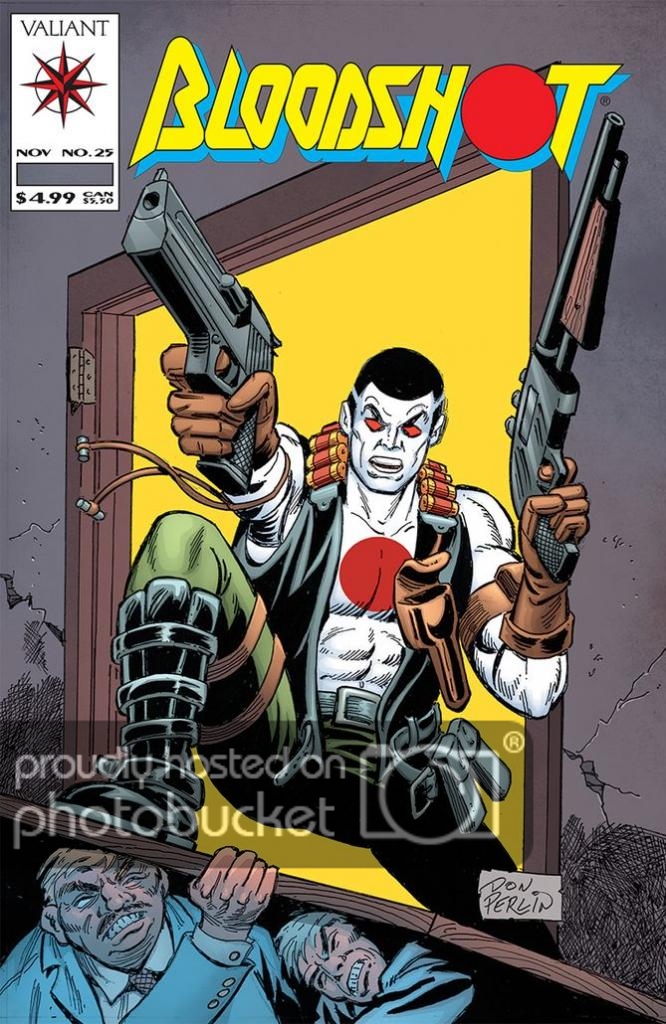 BLOODSHOT #25
Written by Peter Milligan, Howard Chaykin, Duane Swierczynski, Duffy Boudreau, Justin Jordan, Daniel Kibblesmith and more, art by Lewis Larosa, Howard Chaykin, Barry Kitson, Manuel Garcia, Al Barrionuevo, Rafer Roberts and more, covers by Lewis Larosa, Al Barrionuevo, Rafael Albuquerque, Don Perlin, Bryan Hitch.
A murderer’s row of all-star talents is going all-in for an oversized, 48-page milestone anniversary blowout chronicling the classified history of Valiant’s most dangerous, most brutal, most relentless hero â€“ Bloodshot!
Meet the man behind Bloodshot â€“ or is he? â€“ when one soldier’s untapped killer instinct takes over in a feature-sized lead tale of blood, guts, and heart by Peter Milligan and Lewis LaRosa! Plus…an all-new story by comics master Howard Chaykin! The original Bloodshot launch team of Duane Swierczynski and Manuel GarcÃ­a join forces again for an all-new adventure! And Duffy Boudreau and Al Barrionuevo take you on Bloodshot’s journey from the end of the line with H.A.R.D. Corps to the Colombian jungle where Unity found him! Along with many more bonus stories and artwork, a complete cover gallery, and more!
48 pages, $4.99, in stores on Nov. 5. 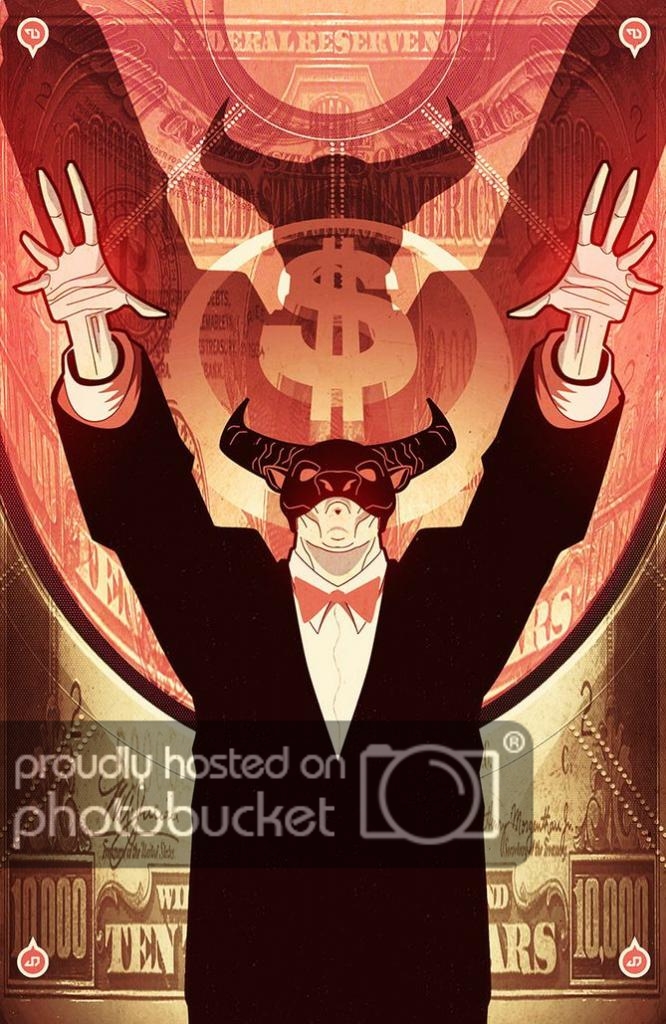 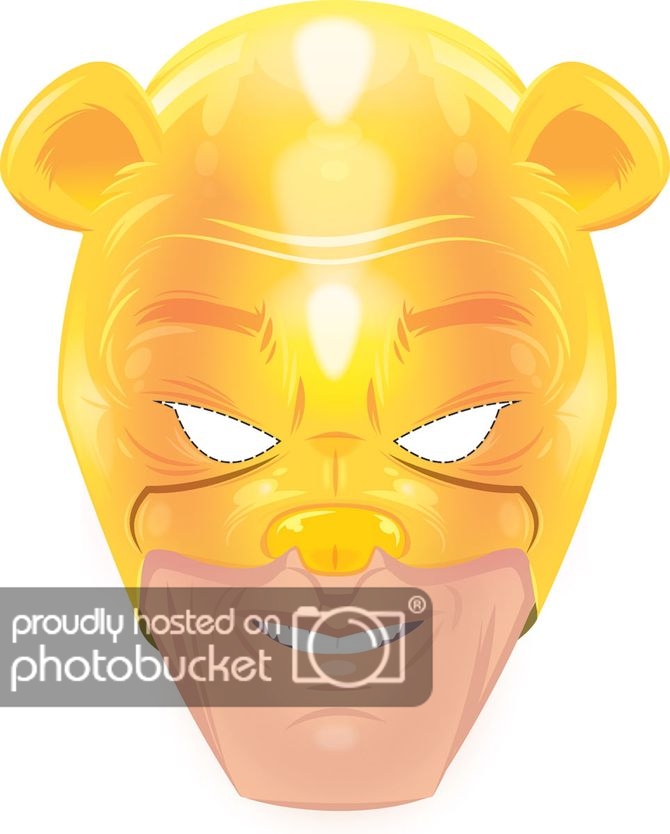 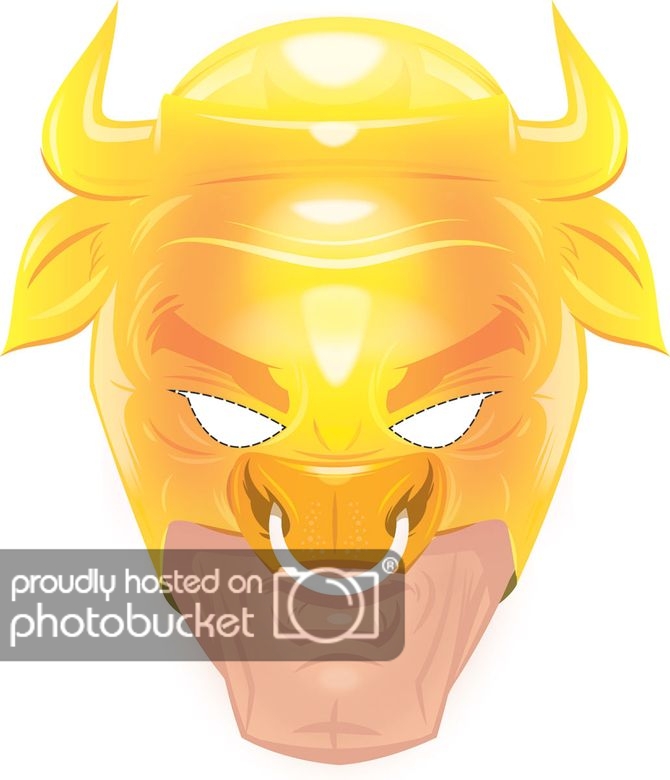 ARCHER & ARMSTRONG: THE ONE PERCENT #1
Written by Ray Fawkes, art by Joe Eisma, cover by Juan Doe, variant covers by Rian Hughes and Juan Doe.
Remember Occupy Wall Street? We don’t, but we know you lost and the villainous One Percent won! Now, in the wake of their greatest victory a new vicious brand of One Percent rises to the top of the class, and this time there will be no one to BAIL OUT their enemies. Don’t miss this wealth of elitist entertainment introducing a brand new villain into the Archer and Armstrong universe! (That will be $3.99, please.)
32 pages, $3.99, in stores on Nov. 12. 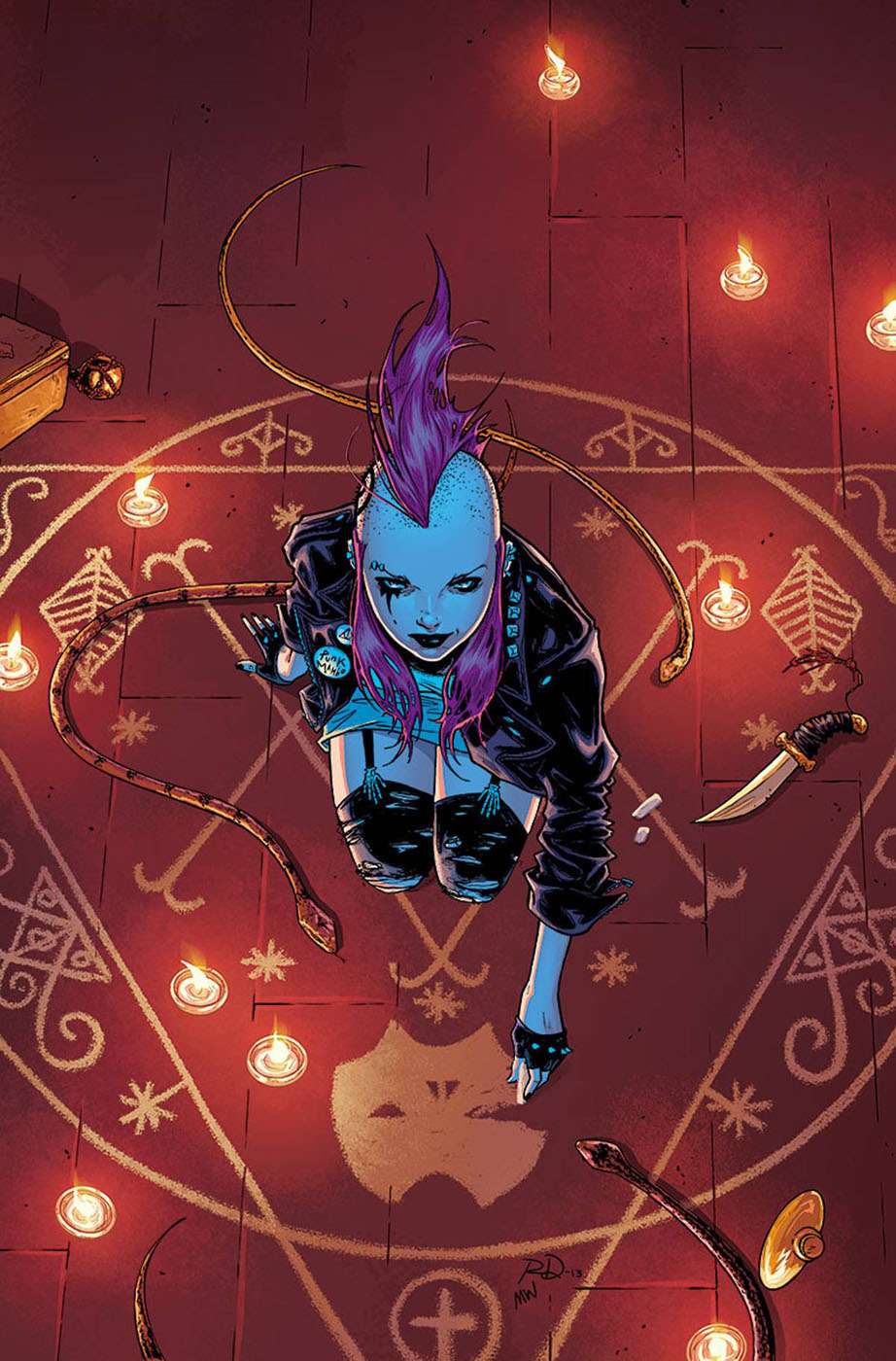 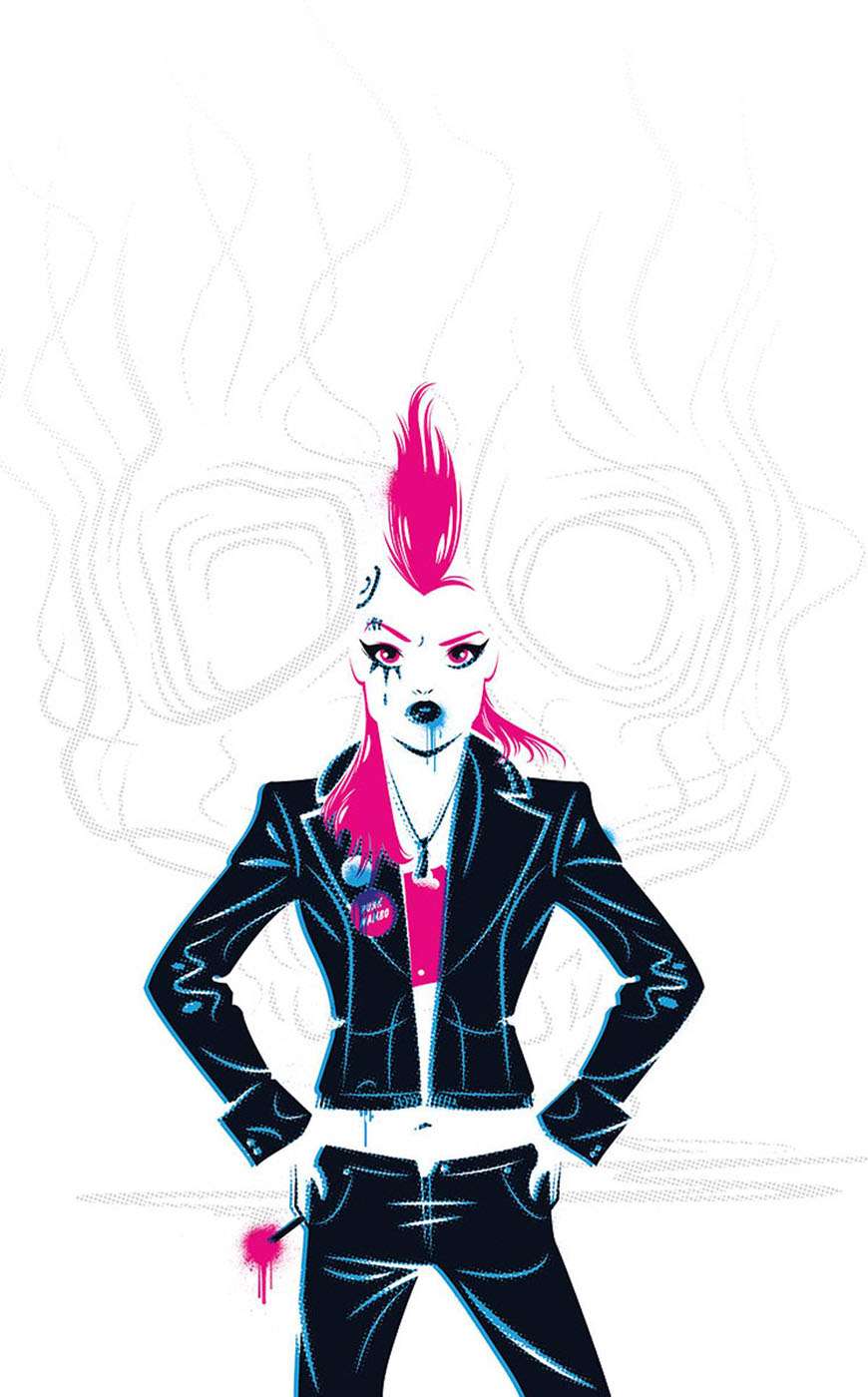 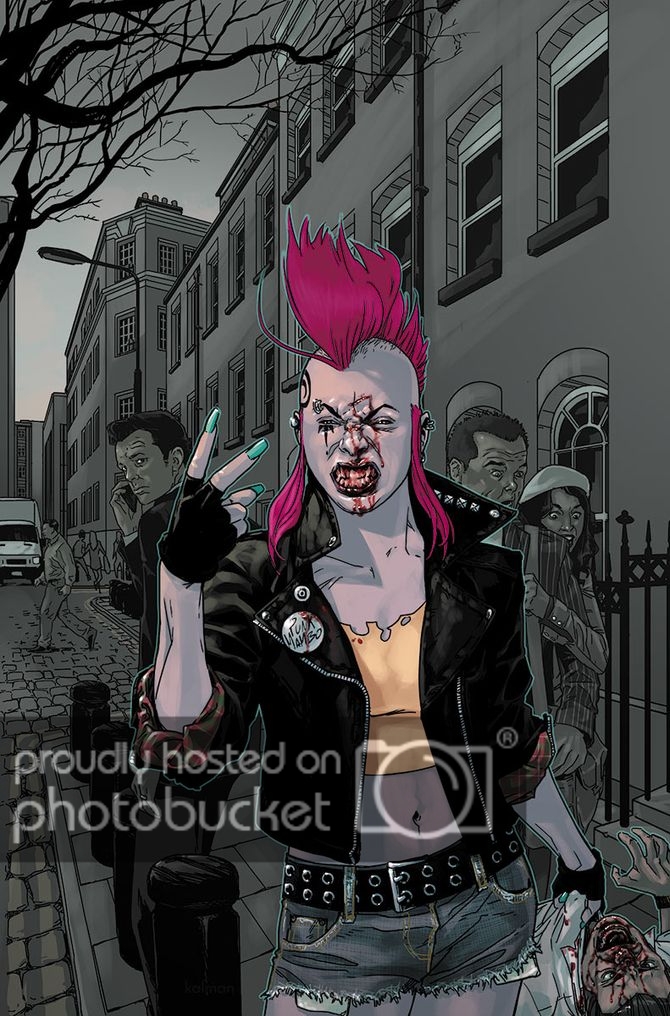 PUNK MAMBO #0
Written by Peter Milligan, art by Robert Gill, covers by Russell Dauterman, Rian Hughes, Kalman Andrasofszky.
From a posh girls’ boarding school, to the slimy gutter of the London punk scene, to sniffing voodoo glue in a Louisiana swamp…how did the Punk Mambo haul herself from the upper crust to the backwater? Now, Punk Mambo is about to head back home to spread some much-needed anarchy in the UK! The punks and the voodoo priests she used to know have cleaned themselves up, and she’s a loud, belching ghost from their past, come to break in the new furniture…and break some faces!
32 pages, $3.99, in stores on Nov. 19. 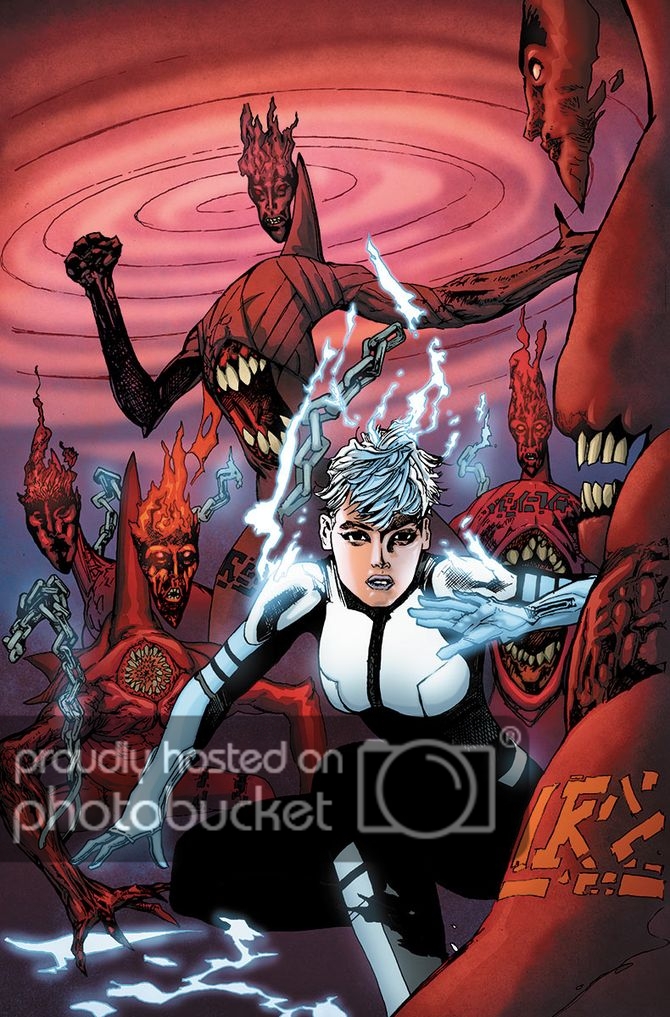 THE DEATH-DEFYING DOCTOR MIRAGE #3
Written by Jen Van Meter, art by Roberto De La Torre, cover by Travel Foreman.
Down in the darkness! Below the veil of the living world, deep in the lands of the dead, Dr. Mirage fights her way through the evils and monstrosities that besiege the spirits. But the real monsters live in the world above, where a sinister hit squad tries to put an end to Mirage’s mission – permanently.
32 pages, $3.99, in stores on Nov. 5. 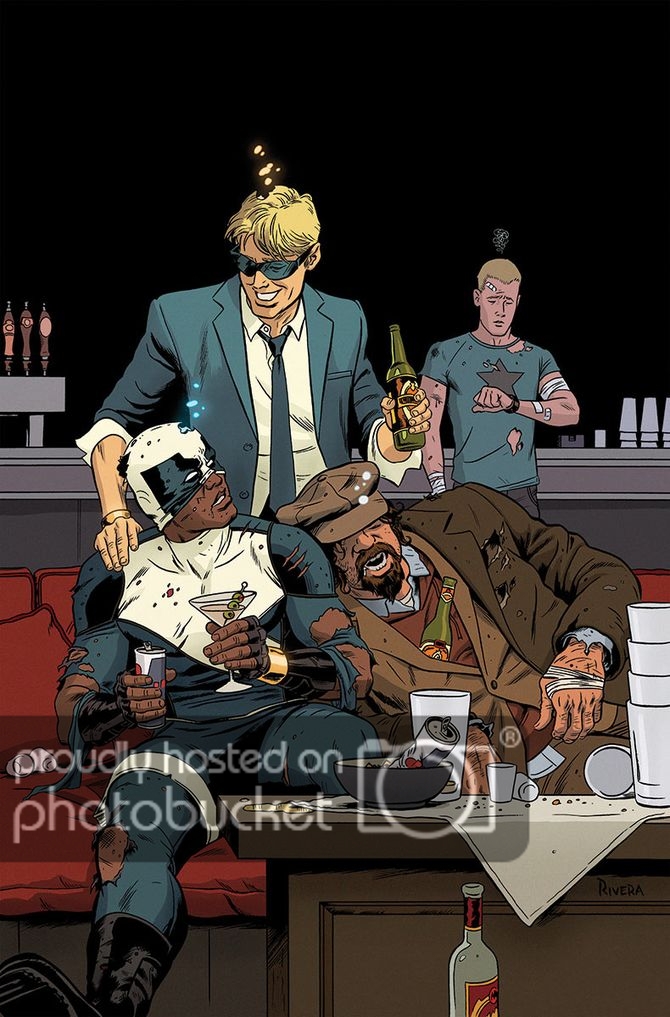 THE DELINQUENTS #4
Written by James Asmus and Fred Van Lente, art by Kano, cover by Paolo Rivera, variant covers by Juan Doe and Cully Hamner.
After battling, befriending, breaking-up, and making-up, our suckers supreme â€“ Quantum, Woody, Archer, and Armstrong â€“ have finally arrived at their destination…Big Rock Candy Mountain! With their enemies rapidly gaining on them can our dreamed-up-team-up find the lost treasure of the hobos before it is too late? You’ve read the other three issues, you’ve played the board game, why in the world would you not see how it ends?! See you at the finish line, hobolievers!
32 pages, $3.99, in stores on Nov. 26. 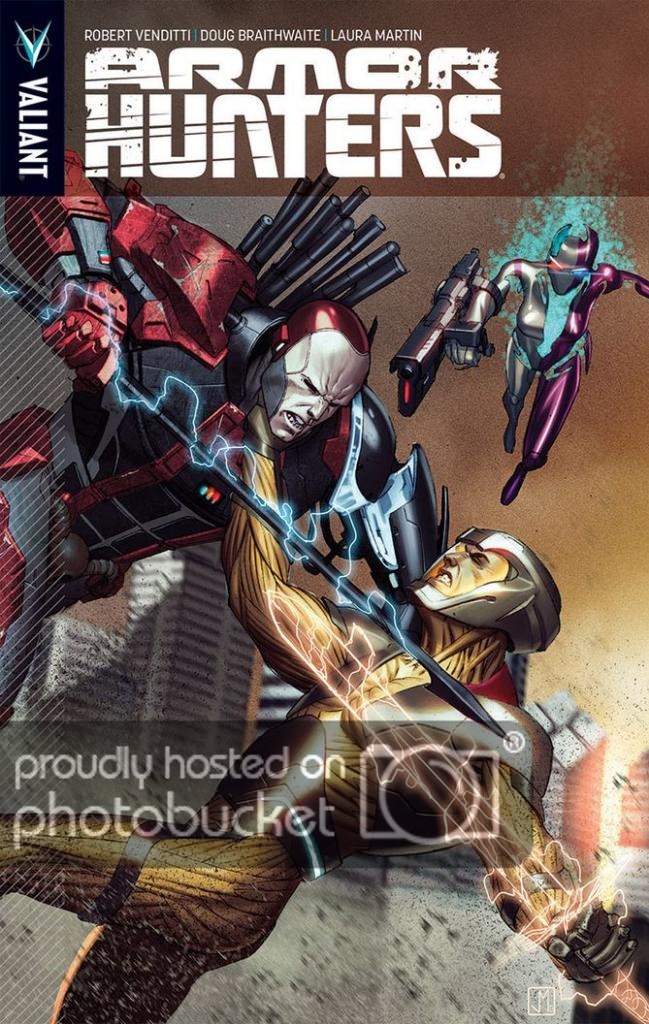 ARMOR HUNTERS TPB
Written by Robert Venditti, art by Doug Braithwaite and CAFU, cover by Jorge Molina.
Earth will be the greatest hunt of all…
When Aric of Dacia returned to Earth with the stolen X-O Manowar armor of an alien race, he thought he’d finally found a weapon to guard the peace and kingdom he’d struggled so long to secure. But now, a relentless and surgical strike team from the farthest reaches of space â€“ sworn to exterminate the armor and all like it â€“ have found their fi nal target. The Armor Hunters are coming. They will hunt. They will trap. They will kill. And they will rid the universe of the X-O Manowar armor’s incalculable destructive power…even if it means taking the Earth with it.
Collecting Armor Hunters #1-4 and Armor Hunters: Aftermath #1.
128 pages, $14.99, in stores on Nov. 5. 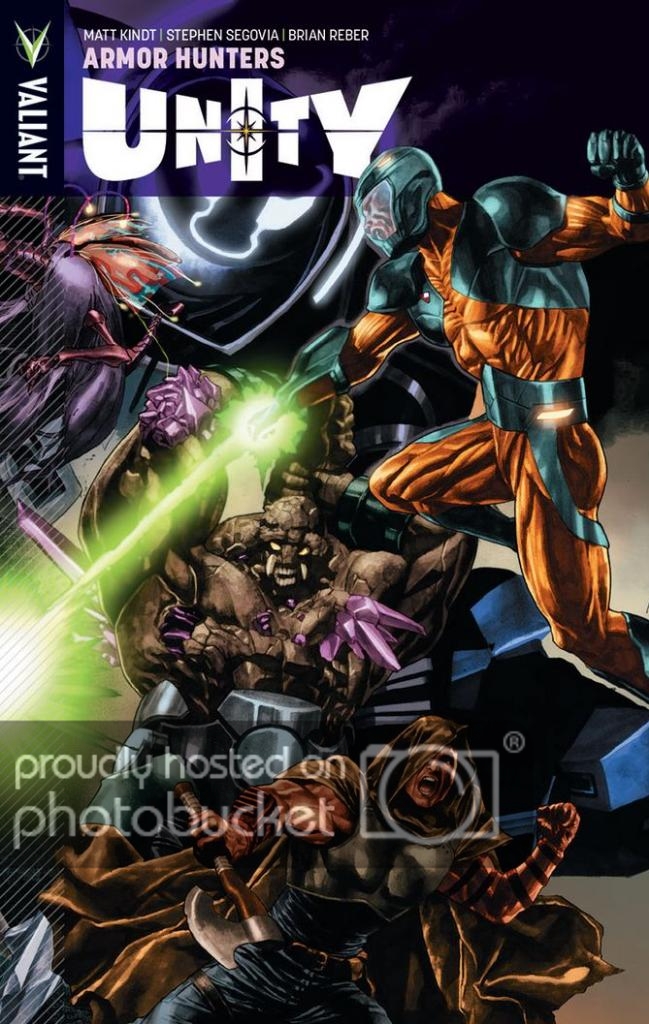 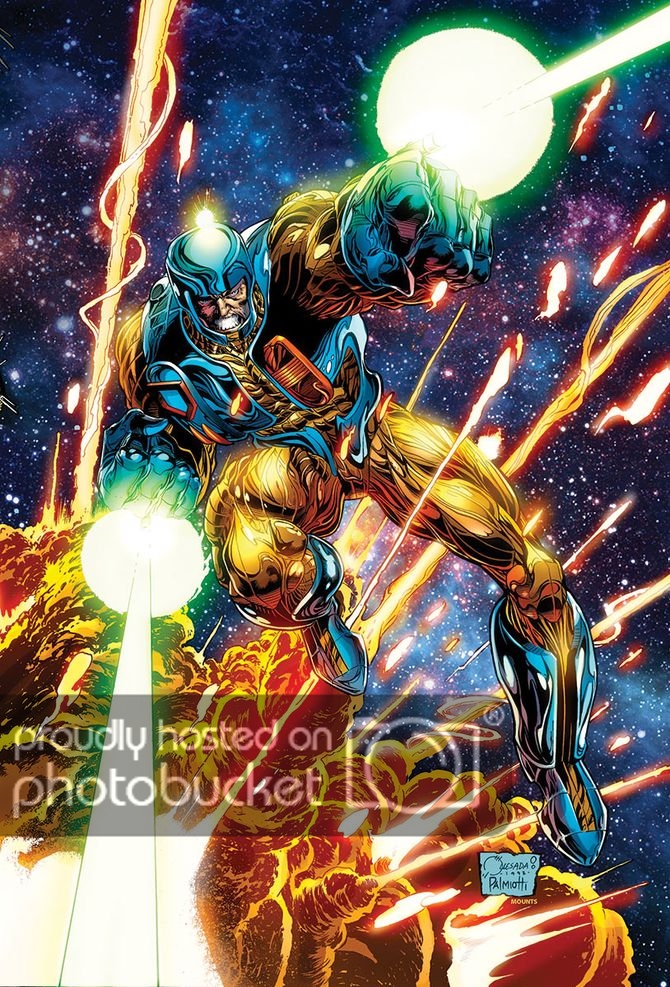 X-O MANOWAR CLASSIC OMNIBUS VOL.1 HC
Written by Bob Layton, Jorge Gonzalez, Jim Shooter, Steve Englehart, John Hartz and Rob Johnson, art by Joe Quesada, Bob Layton, Barry Windsor-Smith, Sal Velluto, Mike Manley, Steve Ditko, Mark Moretti, Michael Leeke, Howard Simpson, Bart Sears, Jose Delbo, Jim Calafiore, Paris Karounos and Rik Levins, cover by Joe Quesada.
Aric of Dacia, a fifth century Visigoth warrior abducted and enslaved by the brutal Spider Aliens, fights his way free of his captors and steals their ultimate weapon, the X-O Manowar armor. But 1,600 years have passed while the Spider Aliens held Aric captive and the time hereturns to is not his own. Trapped in the modern day, Aric is now the last of his people, a savage warrior out of time in a world of corporate treachery and casual deceit. But, armed with the power of the X-O Manowar armor, Aric will rule… and he will make the Spider Aliens pay. Get the complete epic of Valiant’s flagship hero starting here with this massive oversized volume collecting X-O Manowar (1992) #0â€“30, Armorines #0, X-O Database #1, as well as material from Secrets of the Valiant Universe #1.
800 pages, $99.99, in stores on Nov. 26.