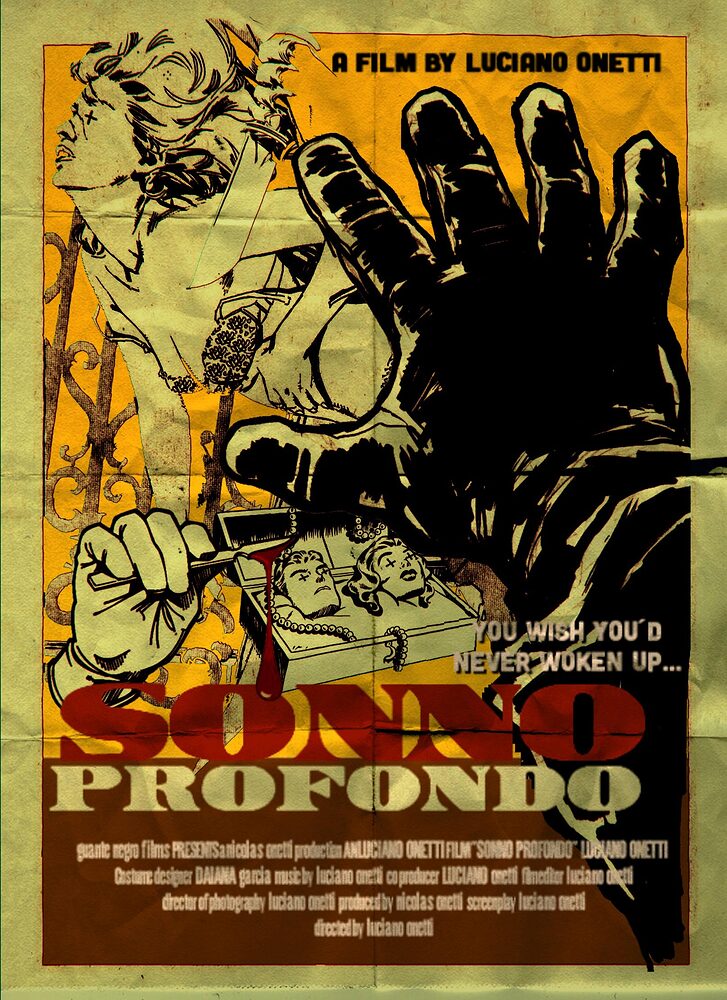 hi! here is a great review of the film in best-horror-movies.com A curtain, a razorblade, and a strike resulting in some excessively fake blood…in five minutes, the tone of Sonno Profondo is set: this Argentinean film has nothing to do with South-American horror but is in the pure style of the Italian giallos (a genre combining crime and horror which became popular in the 60-70’s with directors such as Mario Bava or Dario Argento). The crime story, the mysterious killer revealed at the end, the shiny weapon, the bright red blood, all these elements keep reminding that the film is a completely degenerated tribute to the genre. The writer/director, Luciano Onetti, who signs here his first full-length feature film, pushed the vice even further by writing the screenplay, and shooting the film in Italian. Even the granularity of the film was enhanced to a great extent so as to mimic old-looking Italian films of the 70’s.

This said, it is only fair to say that Onetti took some liberty from the average giallo. Indeed, Sonno Profondo is, above all, a demented piece of art. The craziest aspect of the film lies in the way it is shot. It uses first person view, sort of what was used in the recent remake of Maniac, to really put you in the killer’s shoes. It is also constantly filmed in close-up, alternating between close-ups of body parts (with an emphasis on the leather gloved hands) and objects such as weapons, phones, glasses when the killer drink, etc. This, alongside a camera that keeps focusing in and out, disorientates the viewer on purpose, but the result is fascinating for it gives a very unique atmosphere to the film.

Now the scenario may be the drawback of the film. It follows the journey of a mysterious maniac who kills people wearing leather gloves and who, without giving away any spoiler, find himself the prey instead of the hunter. As in any good giallo, the identity of the killer(s) is only revealed at the very end. The problem here is that the over-artistic aspect of the film makes it a little difficult to follow the story and enjoy the final twist. The presence of a lot of flashbacks further adds to the confusion, and the first-person view makes it difficult to keep visual repair of the characters. At the end of the projection, it was obvious that most people in the cinema did not really understand who the killer was, and what had really happened.

As for the horror aspect of the film, gore-hounds will have to look somewhere else for there is very little blood in the film. The murders are simple and often only results in a tiny spot of red gouache where the knife stroked. The film however makes up for that lack of blood by throwing in some really explicit sex scenes. One of the first scenes shows an embarrassingly long shot of a woman masturbating, close enough so that it leaves no place to suggestion. Further in the film, you then have a long sex scene which is also clearly here to shock the audience.

The line between parody and art is very thin in Sonno Profondo, and it is sometimes difficult to understand if the film is being overly artistic, or purposively sarcastic. A good example is the blood used. One can very easily see that it is red paint, but the intentions of the director are obscure. Is it simply a tribute to the bright red blood of early giallo, or is there a part of the director that wants to make the viewer smile? The result is visually beautiful but also troubling. Half of the audience laughed, but all were forced to stop focusing on the action itself and to start thinking about what the director was trying to say here instead.

In the end, Sonno Profondo is more of an atypical experience rather than a fascinating story. This is actually quite a shift from the original giallo genre whose films tend to focus on the scenario, and in the final surprise. The visual of the genre is however really faithful, even adding a welcomed touch of modernity to it. All of this gets a little repetitive after a while, but the film is only 67 minutes so it is never boring.

In modern time where new genres such as found footage or home invasion seem to be taking all of the cinematographic space, it is a pleasure to find the giallo genre resuscitated by such a beautiful film. More than a great tribute to a forgotten genre, Sonno profondo is a beautiful and film not to be missed.

i think you didnt understand the movie…is your problem. maybe you only see Amer or the strange…but those are not giallo. sonno is a really giallo. like the giallo of the 70s…if you see the bird of the crystal plumage in 2014 in cinemas you will be boring…all 70s movies in the present wont be great movies. i loved Sonno Profondo, and in Spain has great reviews…also in United states, Mexico and England, only in France has bad reviews…that courious…the same country of Amer hahaha. in France you think that cinema is Art, like a paint and thats not art my friends. and most of the french movies are boring and slow, all people in all over the world think that the french movies are boring…so…
Sonno Profondo is a great movie, and only one person did the movie, ONE PERSON!!! or maybe two…with the actress. the movie was selected in 11 film festival in all over the world participating against movies with more of 1.000.000 dollars cost. so, for his first film is a great merit.