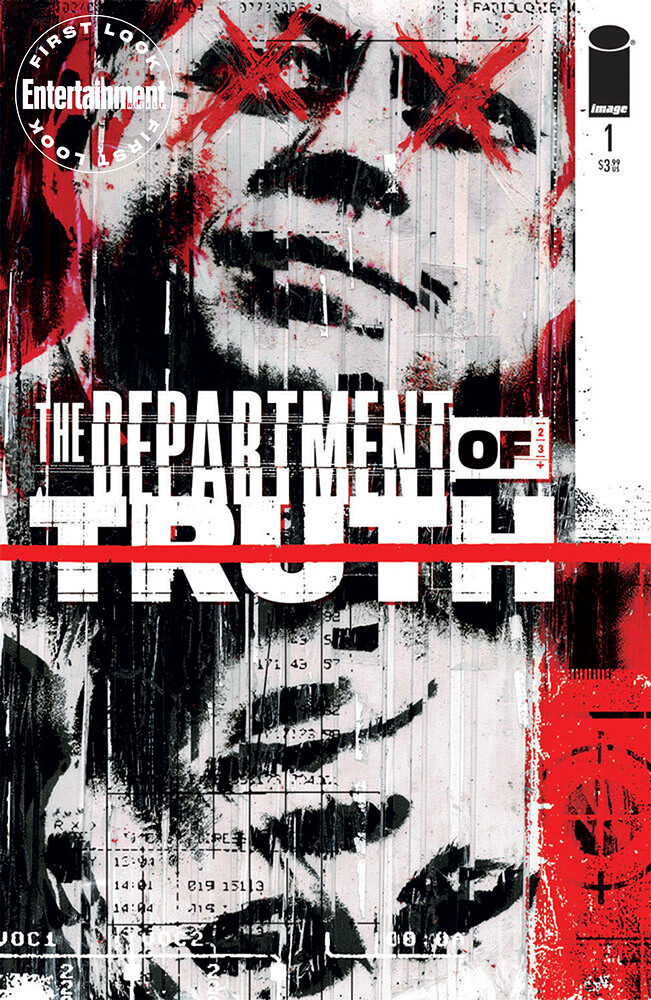 We live in an age of conspiracy theories. Perhaps that’s how many people have felt since the '70s, especially in the '90s when the success of The X-Files made conspiracy theory culture mainstream. Yet no conspiracy theories from preceding decades seem as brain-breaking as QAnon, as self-evidently falsifiable as Flat Earth, or as unsettling as the ones surrounding the late billionaire Jeffrey Epstein and his many famous connections — all of which are very popular on the internet these days. Into this zeitgeist steps The Department of Truth, a new comic from Image

Most conspiracy discussions focus on proving or disproving the theory at hand. Proponents present evidence that what they believe is true, while opponents try to refute that evidence or present countervailing examples. But The Department of Truth, written by James Tynion IV (Justice League Dark) and illustrated by Martin Simmonds (Dying Is Easy), has a different take. Maybe conspiracies can be either true or false, depending not on evidence but on how many people believe in them.

« I think we all have a bit of a fascination with conspiracy theories — the more outlandish, the better, » Tynion tells EW. « The human brain is always desperate to make connections, to make sense out of a chaotic world, and the answers we create often reveal our basest fears and delusions. The Department of Truth is set in a world where all conspiracy theories are true, and stars a young man named Cole who must wade through the darkest shadows of the American Dream in search of something real. It’s about the truths America wants to see about itself, and the ones it does not. It is a frightening conspiracy thriller and I am deeply excited for people to join us for the ride. »

The first issue opens with the grand-daddy of American conspiracy theories: The JFK assassination. In the exclusive preview pages below, you can see a young Lee Harvey Oswald being interviewed by government agents before the story jumps ahead in time to FBI investigator Cole Turner’s attempt to untangle modern internet conspiracies.

« This book is unlike any project I have worked on before, and I can’t wait for readers to follow us into the tangled web of truth, lies, and a world teetering on the edge of a life-shattering realization, » Simmonds tells EW.

The Department of Truth #1 hits stores on Sept. 30. Check out exclusive preview pages below, and a variant cover by Jenny Frison above. 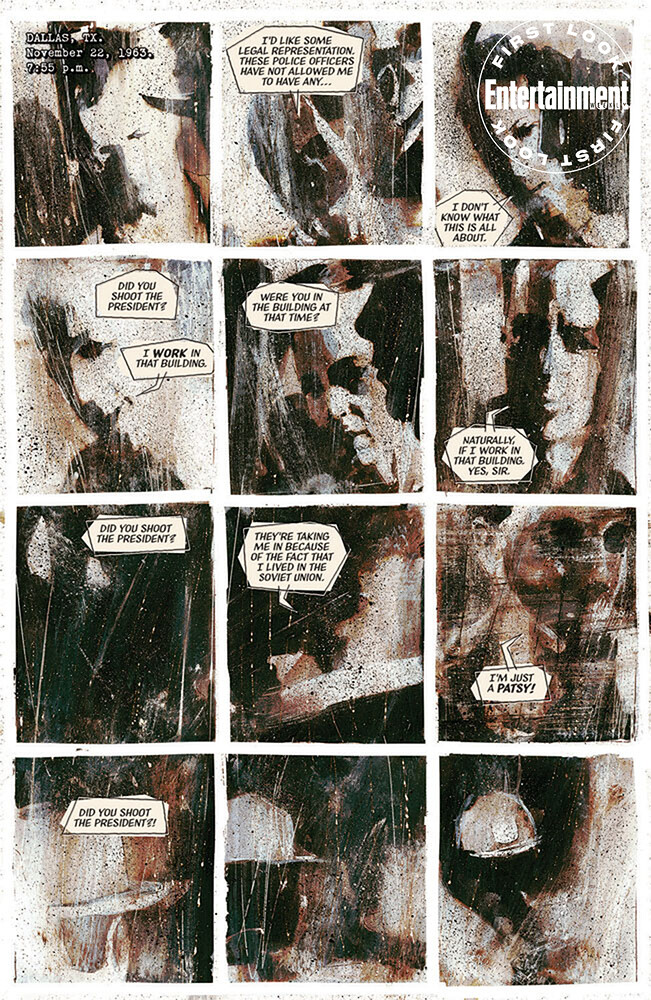 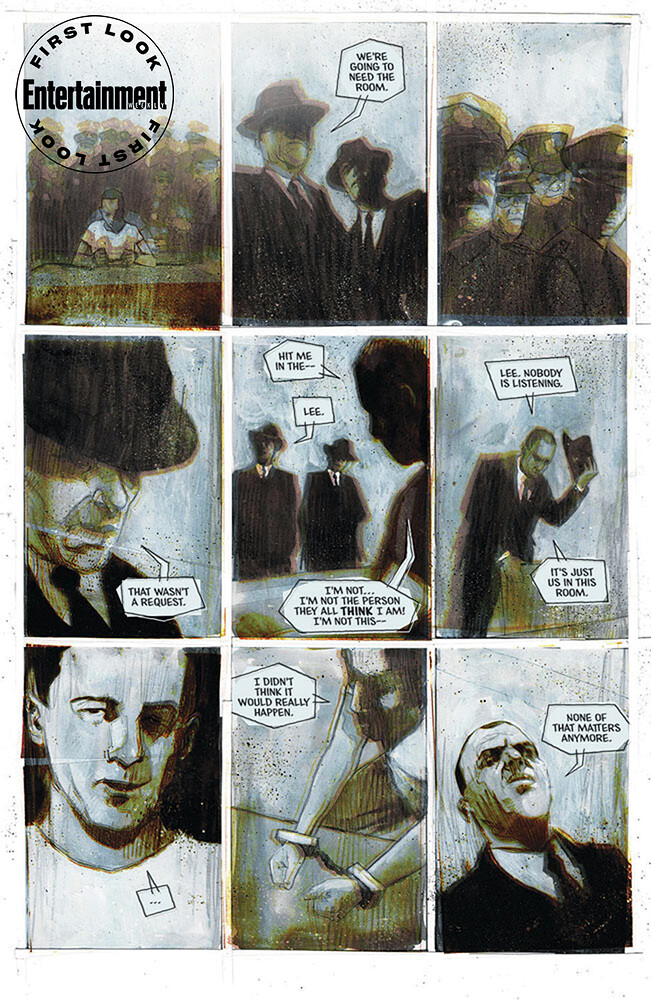 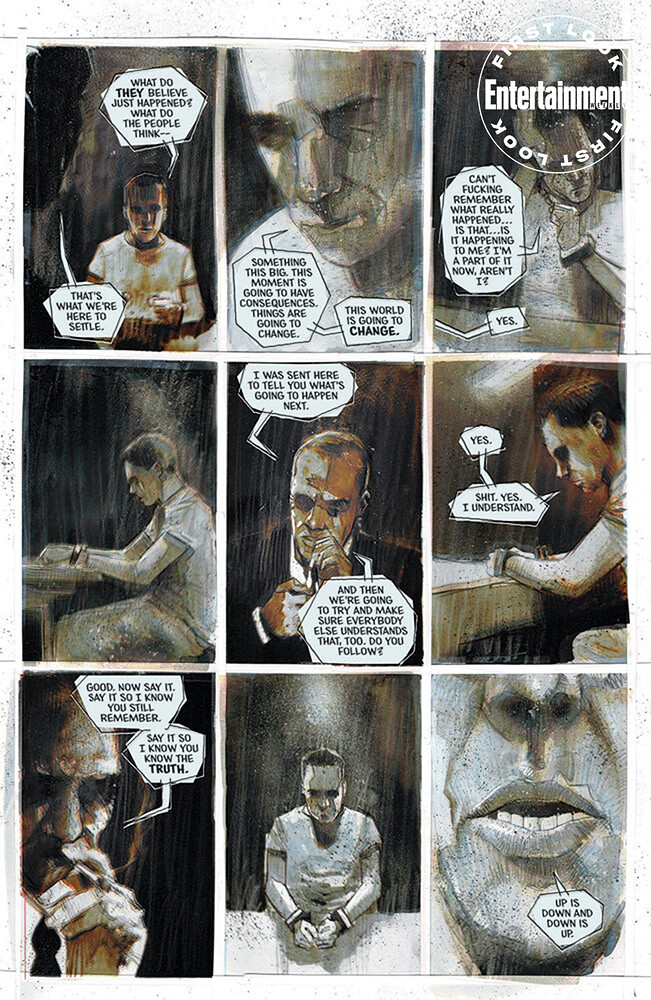 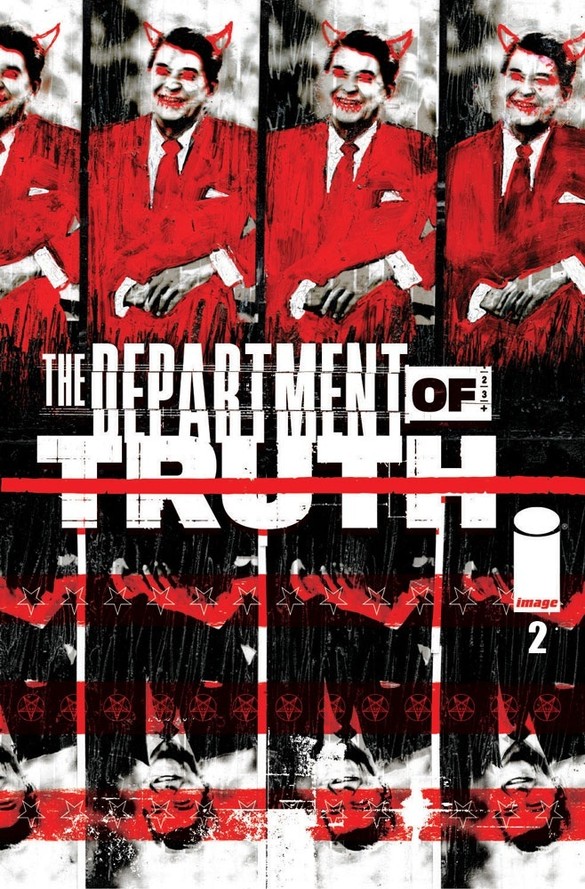 Cover price: $3.99
COLE TURNER has spent most of his life suppressing false memories of Satanic ritual abuse at his preschool. Now, he’s the newest recruit of the Department of Truth…and he just found out those false memories might be truer than he thinks. JAMES TYNION IV (Batman, Something is Killing the Children) & MARTIN SIMMONDS (Dying is Easy) continue their breakout conspiracy thriller!
Writer
James Tynion IV
Artist
Martin Simmonds
Cover A
Martin Simmonds
Cover B
Christian Ward 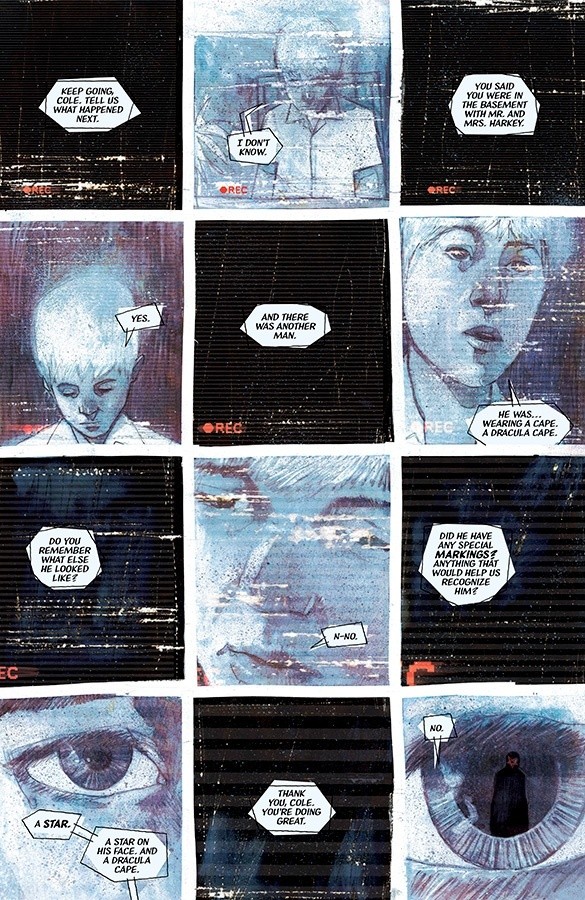 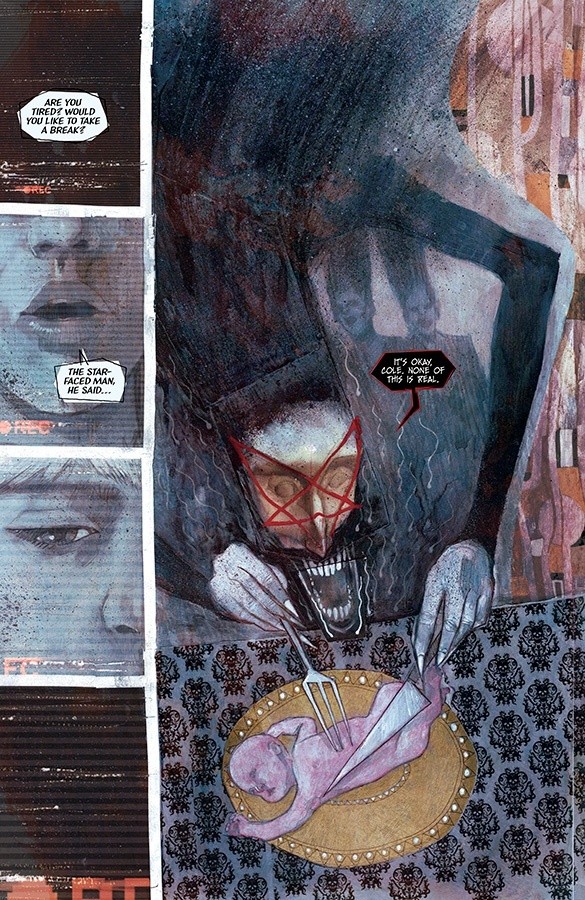 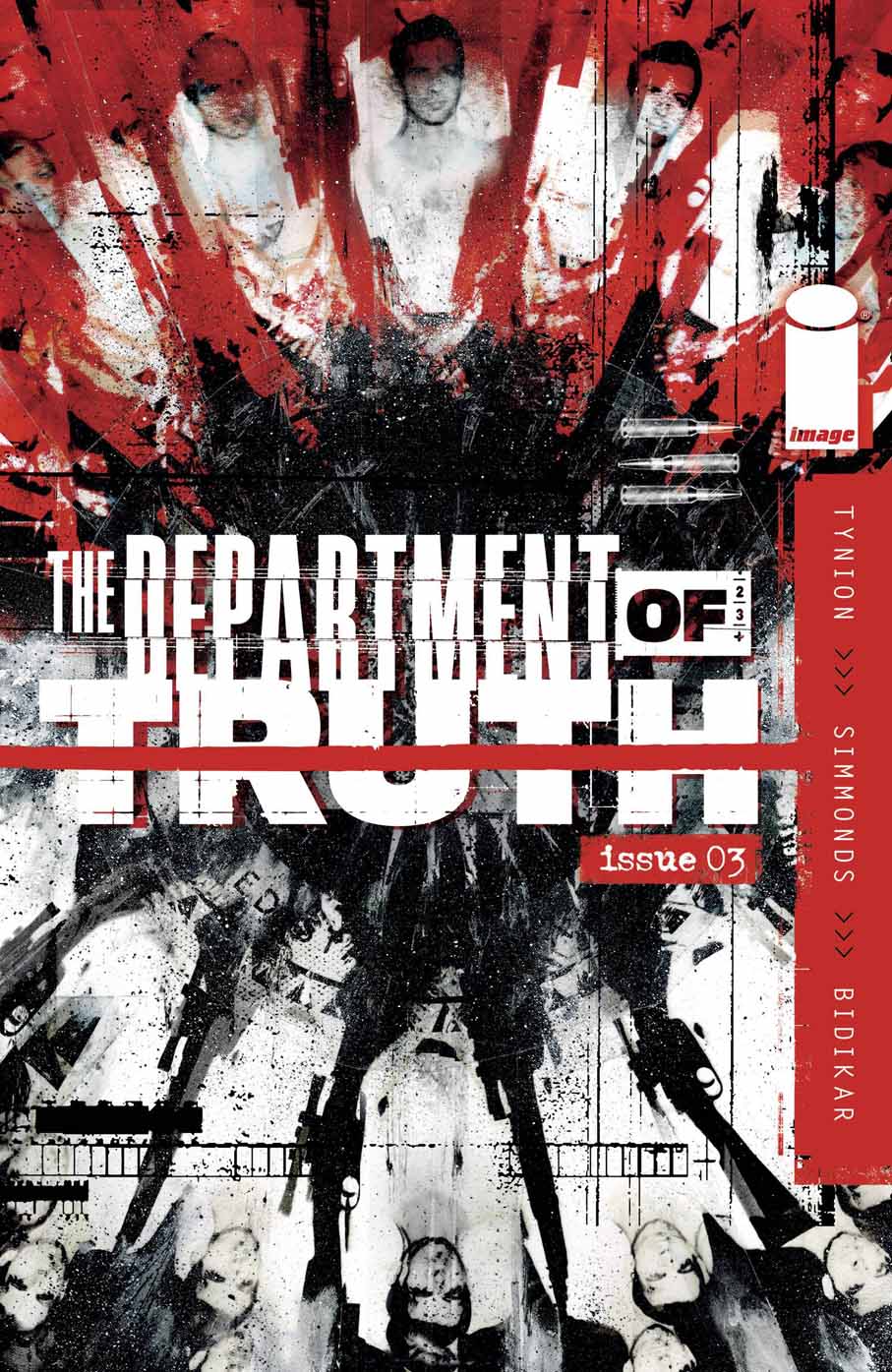 THE DEPARTMENT OF TRUTH #3

Description: Mary never knew what « false flag » or « crisis actor » meant, until her son was murdered in a mass shooting, and the threats and accusations began. But as her reality starts to bend around her, it’s the job of the Department of Truth to keep these dark conspiracies from coming true…at any cost. 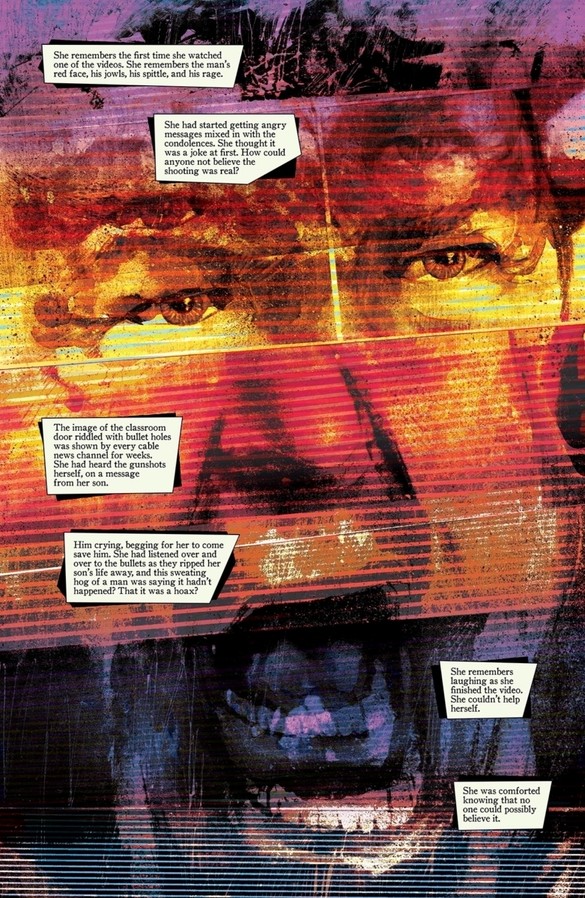 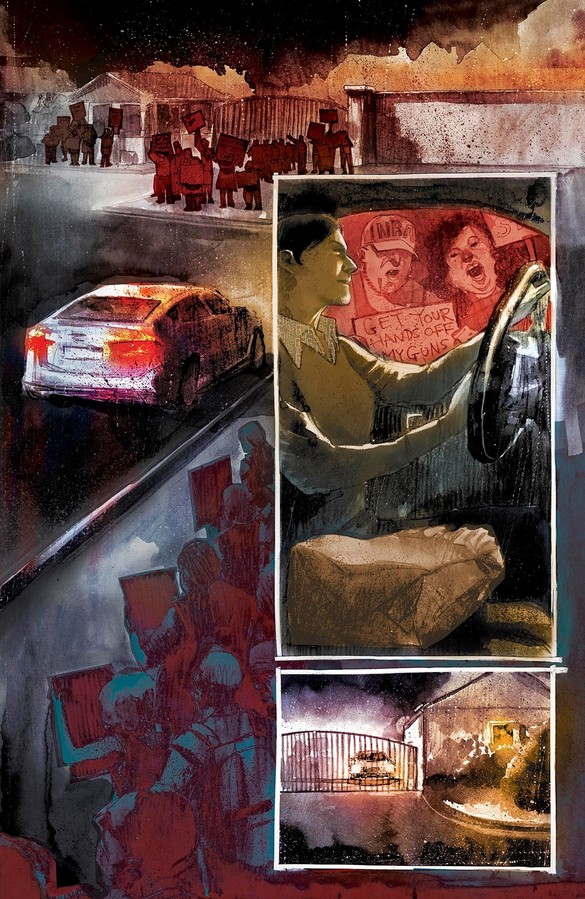