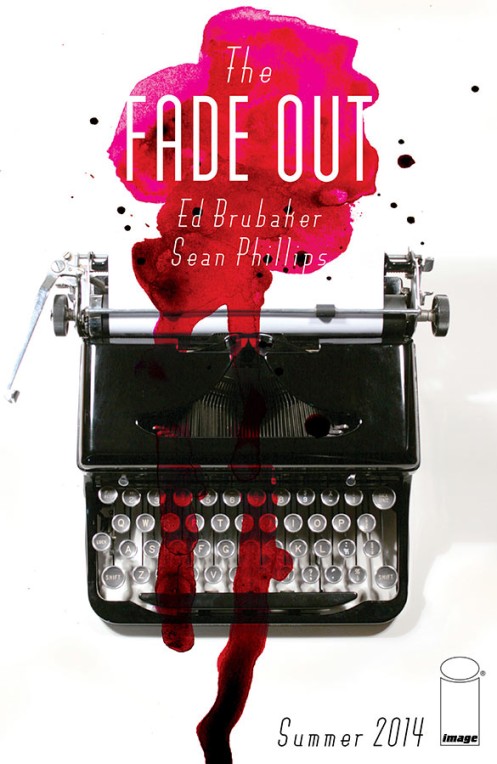 Ed Brubaker (Batman, Captain America, FATALE, CRIMINAL) and Sean Phillips (FATALE, Sleeper) and Image Comics have signed an unprecedented deal in comics publishing, a five year deal to do anything they want with total freedom, total control, and total ownership over their projects.

“Everyone at Image loves working with Ed and Sean,” said Eric Stephenson, Publisher at Image Comics. “They’re one of the best creative teams working in comics today, with an absolutely stunning catalog of work, and I personally consider bringing Fatale to Image one of the best things to happen to us over what has been a pretty amazing last couple years. One of the great things about this business is the opportunities we’re given to work with good people, and it’s really gratifying to see directly how talent like Ed and Sean respond to the unparalleled freedom and support we offer at Image.”

“This is amazing. It’s like having an overall deal with a studio, except we get to greenlight our own projects,” said Brubaker. “Sean and I have been making comics together for fifteen years, and in the early days before we built the passionate readership we have now, we struggled to survive, so a deal like this is exactly what I was looking for. I’ve already got more than enough ideas to fill those five years, and both Sean and I are looking forward to experimenting and really pushing the boundaries.”

The first project on this new deal for the award-winning creators is THE FADE OUT, debuting this summer, following the conclusion of FATALE with issue #24.

“The Fade Out is my ultimate noir story. It’s a brutal crime story set in late ’40s Hollywood, and all spinning around the mysterious death of an up-and-coming starlet,” said Brubaker. “For people who’ve been waiting for us to return to Criminal, this will be exactly what they’re looking for, but on a much more epic scale—going from studio backlots to the debauchery of the rich and famous, and even stretching back to the horrors of World War Two.”

Several of Brubaker and Phillips’ previous projects are currently in development as films, with Kim Jee-Woon (A Bittersweet Life, I Saw The Devil) recently signing on to direct COWARD, the inaugural story arc of their celebrated series Criminal, and Sleeper being produced by Ben Affleck (Argo) and Matt Damon (The Bourne Identity) at Warner Bros.

THE FADE OUT is a new, ongoing noir series coming to Image Comics in 2014.[/quote]

[quote]**Image really isn’t about limiting creators’ options. That’s why we don’t have exclusives. **We’re not trying to tie anyone down so they can’t get off the plantation, and make no mistake, the shackles may be solid gold, but there’s only so much freedom in that kind of arrangement. What we’ve got here… Obviously, there are pros and cons to the kind of creative freedom we offer, and as you just said, not every book is a guaranteed success. And yeah, Marvel and DC — let’s not forget DC, because virtually every artist to ever work with Jay Faerber on Noble Causes or Dynamo 5 has been scooped up by DC and every member of Richard Starkings’ ELEPHANTMEN team were snatched up to produce THE SPIRIT — are constantly sniffing around here looking for new talent. Dark Horse does the same thing — they even tried to lure Kirkman away back when The Walking Dead first took off. He and Tony Moore had pitched a book there and it was turned down, but the minute The Walking Dead was a hit, Dark Horse was on the phone telling Robert how much better he could have it at Dark Horse. How much work by Nick Spencer did you see from Marvel and DC before Morning Glories took off? Now he’s one of Marvel’s up-and-comers. I’m not sure if Nick should be flattered or insulted.

Waiting for books and creators to show their worth at Image and poaching them seems like a lazy, cowardly way of publishing comics, but you’re right, it happens.[/quote]

[quote=“Ed Brubaker”]Basically, it’s a five-year deal to do any project we feel like doing. We don’t have to get approval from them ahead of time, we don’t have to pitch it or go through the usual steps, it’s just everything we do for the next five years is done under this contract. So we can just send in solicits with covers and send in the issues and we get approval over format and all the printing. Basically it’s like we can do anything we want and they’re backing us to do it. It’s kind of insane. I mean, I’m pretty sure no one in comics has had a deal exactly like that, except maybe the Image partners. I’d probably the closest thing you can get to being a partner here without having to actually be a partner here. And since I only do two comics, that’s never going to happen.

But it really is kind of a revolutionary thing for me especially, because I’ve spent fifteen-something years in comics as a freelancer and I’ve gotten lucky and been in the right place at the right time a few times, but there’s something called ‘Freelancer Paranoia’ which is: Whenever things are going well, you’re waiting for the bottom to drop out and it never goes away. I felt like Sean and I have this fifteen-year track record of every project we do builds bigger than the one before. Fatale is the most successful thing we’ve done together and our relationship with Image has just been so great that I thought, “What if we had a continuing relationship where we got to skip all the rigamarole and we get to do whatever we want and you guys publish it, and you’ll back us and we can experiment and do whatever we want?” And Eric [Stephenson] said, “Yeah, why not?” I said, “I’m not sure anyone’s ever made this kind of deal before”, and that made it even more attractive to him, of course, because he’s all about changing the way things are done.

A lot of people were saying — I’ve gotten a few emails today — “Is this an exclusive?” But it’s not even necessarily that, it’s a publishing arrangement more than anything. It’s for the two of us, as a team and the way we talk about that, it’s like a “Marvel/DC War” kind of thing where they’re trying to get people tied down. We’re not tied down. The deal is a commitment from them to us, so that’s even better. We get to just be artists and be treated like artists and get to do our thing, our way. To me, that was just like, “Holy shit.” I know Fellini said, “Ultimate freedom is the death of an artist.” because you’ll never turn in anything, but luckily for me, Sean needs pages every three days. If I was drawing it myself, during the five-year deal, I’d probably end up turning in one comic because I’d never figure out what the hell to do, but thankfully Sean’s involved and he always wants to draw. The end result, I think, will be more comics from us than we’re currently doing and more — I think better — comics. So far, the next thing and the thing I’m starting to noodle on in my notebook to do after that are going to be two of the craziest, riskiest, but best things we’ve ever done.[/quote]

[quote]The Fade Out #1
Story by Ed Brubaker
Art by Sean Phillips
Colors by Elizabeth Breitweiser
Cover by Sean Phillips
Publisher Image Comics
Cover Price: $3.50
Release Date Wed, August 20th, 2014
Ed Brubaker (FATALE, VELVET, Captain America: Winter Soldier) and Sean Phillips (FATALE, Criminal, Marvel Zombies) launch the first show-stopper from their unprecedented five-year deal announced at Image Expo in January—the hotly anticipated epic noir series, THE FADE OUT.
As an added bonus to this exciting launch, this first issue will clock in at 40 pages and feature exclusive back page articles. For fans wishing to experience noir fiction in true ‘40s style, an oversized “movie magazine replica” variant edition with 8 extra pages of behind-the-scenes art and articles will be available for order.
An intricate and groundbreaking crime story on a level Brubaker and Phillips have never tackled before, THE FADE OUT weaves a tangled web through the underbelly of a 1948 Hollywood… A noir film stuck in endless reshoots. A writer plagued with nightmares from the war and a dangerous secret. An up-and-coming starlet’s suspicious death. And a maniacal studio mogul and his security chief who will do anything to keep the cameras rolling before the Post-War boom days come crashing down. THE FADE OUT is the most ambitious series yet from the award-winning Noir Masters.[/quote]

Sean and I had been together for 15 years, and we were always a little bit shell-shocked and worried, even though our fanbase and readership seems to keep growing with each project and our trade paperbacks keep selling. [Our Wildstorm title] “Sleeper” was such a shoestring kind of thing where we always kept worrying were we gonna get cancelled, and we were always worried about why aren’t the trades selling. Jim Lee had to keep calling us up, saying, “Don’t worry, I’m not going to let them cancel the book.” So our whole relationship as creators started out worried that no one was going to buy whatever we did. And after 15 years, I realized we are actually one of the most successful teams in comics, and yet some part of us still doesn’t think that because we don’t sell 100,000 copies a month like “Walking Dead” or something, but we sell enough that we make more than we would make doing those same books at Marvel.

The first project from their groundbreaking five-year deal at Image will have ED BRUBAKER and SEAN PHILLIPS fans, old and new, at the edge of their seats, as they weave an epic crime story unlike anything they’ve done before.

Hollywood - 1948. A noir film stuck in endless reshoots. A writer plagued with nightmares from the war and a dangerous secret. An up-and-coming starlet’s suspicious death. And a maniacal Studio Mogul and his Security Chief who will do anything to keep the cameras rolling before the Post-War boom days come crashing down. THE FADE OUT is the most ambitious series yet from the award-winning Noir Masters.

Bonus: This 40-PAGE FIRST ISSUE features more story pages, as well as exclusive back pages articles that are only in these single issues![/quote]

Was a murder covered up? Or did the movie starlet commit suicide? And how does the show go on with a dead leading lady and an unfinished film?

BRUBAKER & PHILLIPS’ new crime noir masterpiece is just getting started! Remember, every month THE FADE OUT has exclusive back pages articles that are only available in the single issues.[/quote]

BRUBAKER & PHILLIPS’ new crime noir masterpiece is just getting started! Remember, every month THE FADE OUT has exclusive back pages articles that are only available in the single issues.[/quote]

[quote]The Fade Out #5
Story by Ed Brubaker
Art by Sean Phillips
Cover by Sean Phillips
Publisher Image Comics
Cover Price: $3.50
Release Date Apr 15th, 2015
The second act of BRUBAKER and PHILLIPS’ biggest hit ever begins with a bang! Someone knows who killed Valeria Sommers, but can our “heroes” find them without exposing themselves? And will their search lead them to answers they don’t want to find? A perfect jumping-on point for new readers, released the same day as the trade! And packed with bonus back pages articles only found in the single issues.[/quote]

[quote]The Fade Out #6
Story by Ed Brubaker
Art by Sean Phillips, Elizabeth Breitweiser
Cover by Sean Phillips, Elizabeth Breitweiser
Publisher Image Comics
Cover Price: $3.50
Release Date May 20th, 2015
BRUBAKER and PHILLIPS’ best-selling series ever just keeps hitting! Charlie and his blacklisted friend Gil hunt Hollywood’s back alleys for answers to Valeria Sommer’s murder and cover-up, but the one man who might know something, ex-child star “Flapjack” Jones, has gone into hiding…unless he’s dead in a ditch by the side of the road.[/quote]