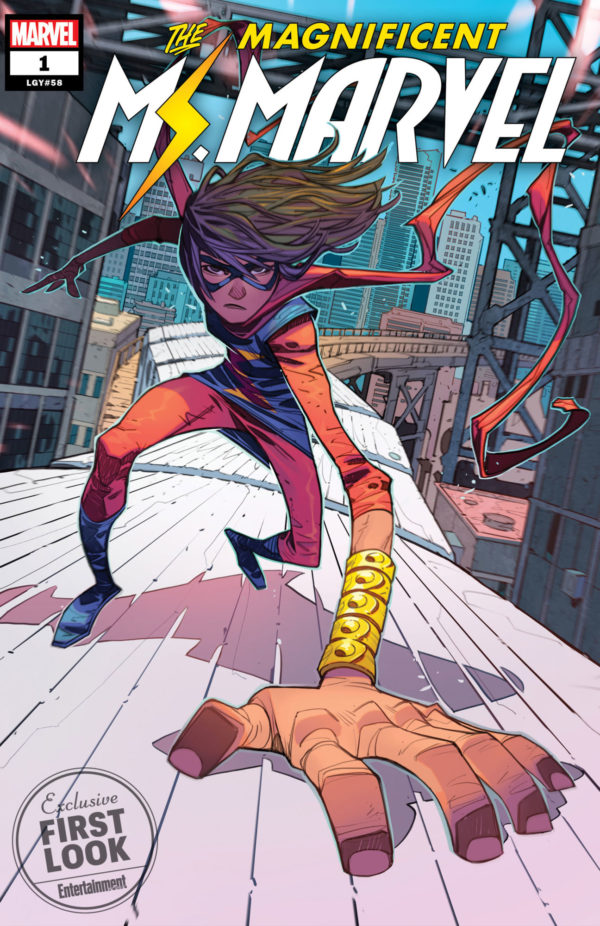 Saladin Ahmed : “Without giving too much away, there’s going to be big-canvas Marvel scope happening in this book, while still maintaining that intimate tone that people have loved about it. I think that Kamala’s earned her superlative. She’s been around for a few years and she’s been magnificent. We kind of wanted to announce that this was her leveling up — as she would probably put it. I think people are going to be pleasantly surprised by the change of tone in the art. All of the artists who have worked on Ms. Marvel have been stellar, so it’s not that anything needs changing, but there’s a different tone as we go into this new number one, and the art reflects that. It’s not ‘gritty Ms. Marvel,’ but it’s darker and more atmospheric.”

Being part of the genesis of Kamala Khan has been one of the greatest honors of my life. From my puzzlement during that first telephone conversation with Sana in 2012—I was pregnant, frazzled from a long book tour, and in disbelief (You want to launch a new character? In this market?)—to my stunned amazement when the first issue went into its seventh printing, to my glee when Sana handed the first trade paperback to the President of the United States, this journey has been pure joy.

Sana and I initially had very modest expectations for this book. Our goal was to get to ten issues. It was going to be a fun side project—a young adult Muslim Super Hero! At Marvel!—that would have the lifespan of fun side projects. I budgeted a year for it. But by the time the first trade paperback hit the New York Times Graphic Books bestseller list, I realized Kamala was quickly becoming the center of my life.

And that is in no small part thanks to you, the readers. Your enthusiasm has propelled this character to greater and greater heights. Never in my life did I imagine I would walk into my local drugstore and see something I created staring back at me from t-shirts and action figures. Yet it’s the experiences I’ve had meeting readers that have changed me on an elemental level. At signings, at conventions, at classroom visits, we’ve laughed and cried together. I’ve met your kids, seen pictures of your dogs, held your hands while you talked about your most difficult experiences. Kamala is not just what you read on the page or watch on TV—she is this community. And she has made all of us better human beings.

In February, I will have written sixty issues of this book—five years of Kamala’s story. She is now something much bigger than the miniseries Sana and I planned years ago. She will, in all likelihood, outlive us all. I couldn’t be happier about it—and by that same token, it means that my part in Kamala’s adventures must eventually come to an end. Great superheroes stay fresh and relevant because they are the work of many storytellers, all of whom bring their unique perspectives and experiences to the character. Earlier this year, I began to have the persistent feeling that I was in danger of repeating myself every time I sat down to write a new script. It was a sign: time to start planning my exit.

I was delighted when Saladin said yes to taking over writing duties on Ms Marvel. His plans for Kamala are incredibly exciting, and it’s been a lot of fun getting an inside look at where the series is headed under his direction. I was blown away by his work on BLACK BOLT, which gave me the same sense of endless possibility that reading Sandman gave me as a teenager. You’re in for a treat.

I will miss working with the phenomenal roster of artists that has made this series one of the best-looking books on the shelf year after year—Adrian Alphona, whose genius character and environmental designs gave this series its distinct look; Jamie McKelvie, whose design sense is already legendary, for the costume that so quickly became iconic; Takeshi Miyazawa, whose kinetic, gleeful style was impossible not to love; and Nico Leon, who is basically my blood brother at this point, and for whom no action sequence is too weird. The amazing Ian Herring, who has colored EVERY SINGLE ISSUE of this book for five straight years, and whose flawless palette gives the book stylistic continuity no matter who is drawing it. And Joe Caramagna, letterer extraordinaire, who has spent half a decade putting up with my last minute edits when he really shouldn’t have had to. (I love you, Joe. I’m sorry, Joe.)

In a couple of months, I will step down as the writer of Ms Marvel. But I will be a fan for life.

MS. MARVEL IS BACK! But it’s not business as usual in Jersey City. Aliens are wreaking havoc in Kamala’s corner of the world, and they seem weirdly interested in Ms. Marvel…and her family. Eisner Award-winner Saladin Ahmed (BLACK BOLT, EXILES) and rising star Minkyu Jung (Batgirl, Nightwing) take the reigns of one of Marvel’s most beloved new characters! You won’t want to miss this shocking start of a new era! 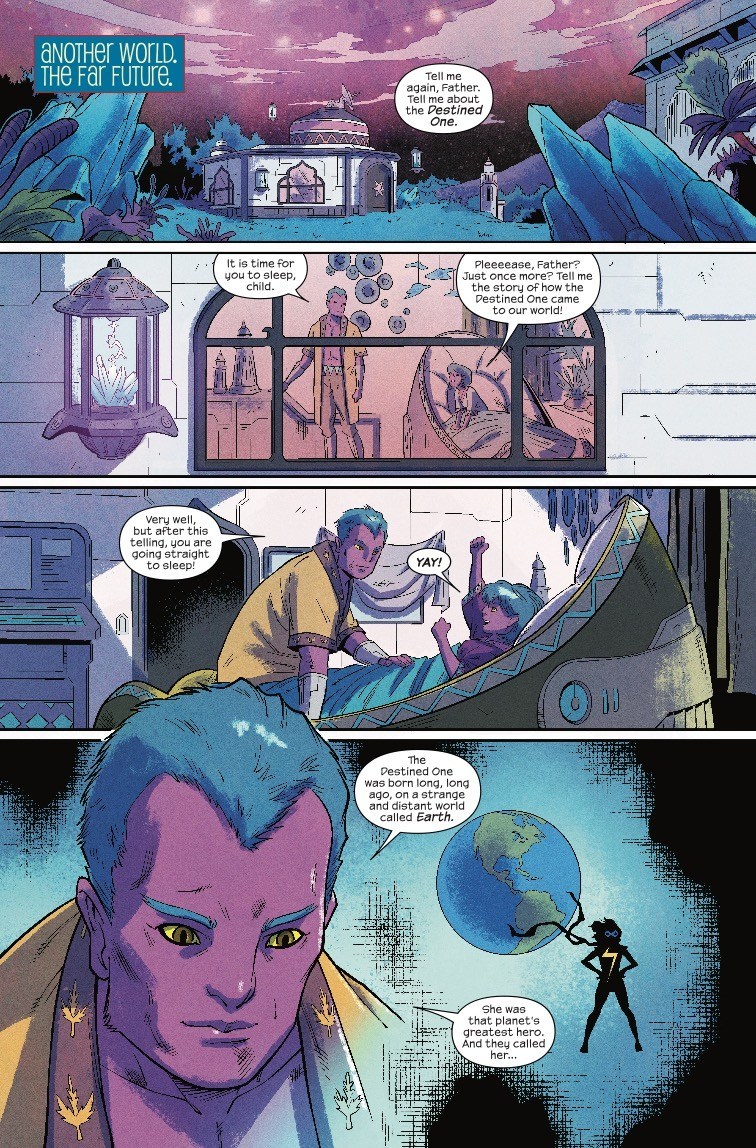 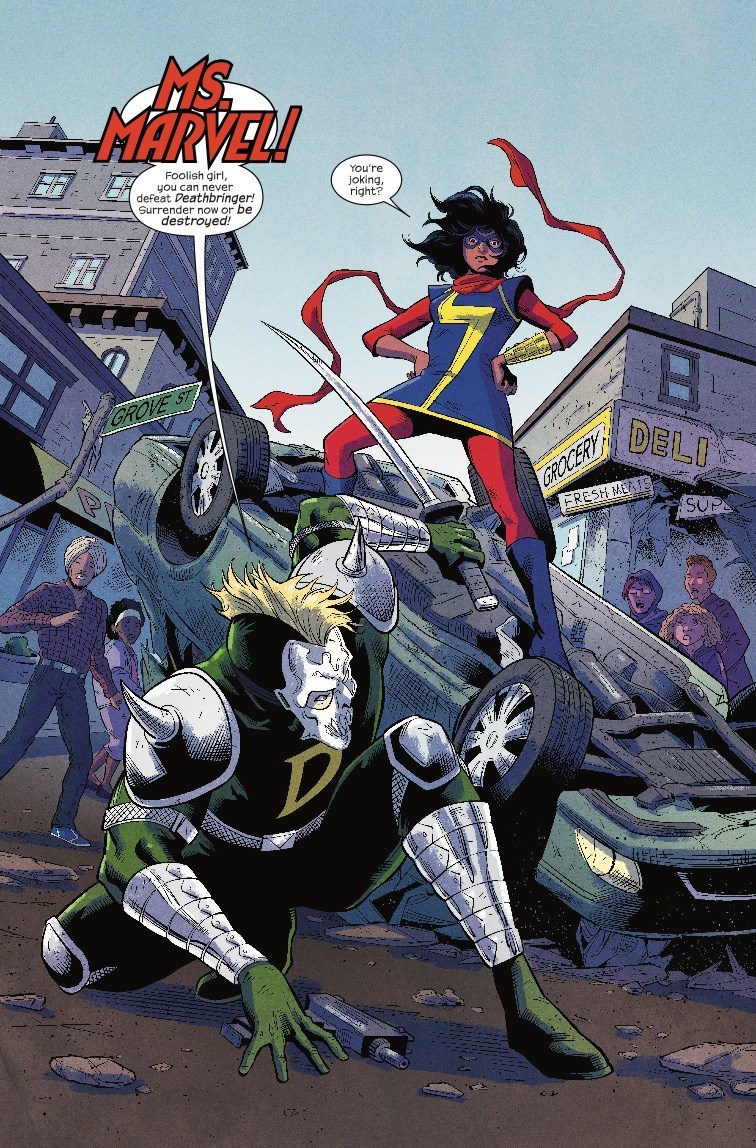 Given that she’s a teenager still living at home, Kamala Khan has had to deal with a lot of parental drama during her time as the superhero Ms. Marvel. A big part of that drama is her secret identity, and while she told her mother about her alter ego...

A group of aliens are sure that Ms. Marvel is the chosen one they’ve been waiting for. But IS she? Something seems fishy with these aliens, and to get to the bottom of it, Kamala will embark on her first big space adventure! You’ll never guess who she’s bringing along as backup! 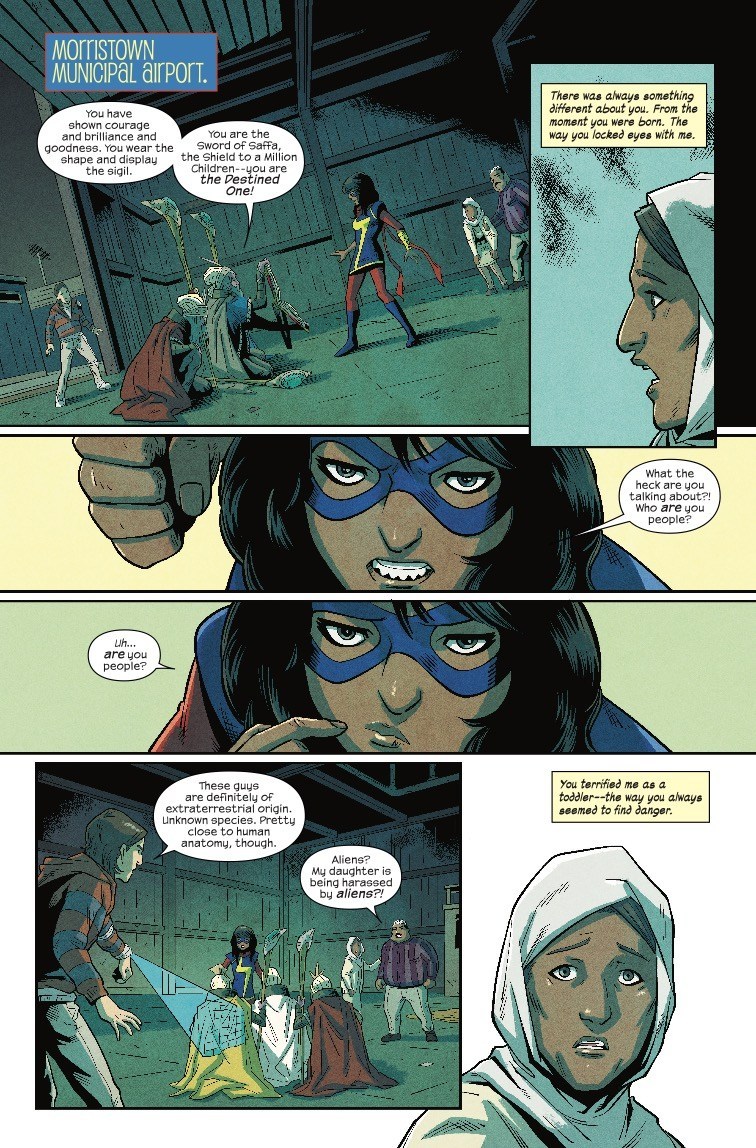 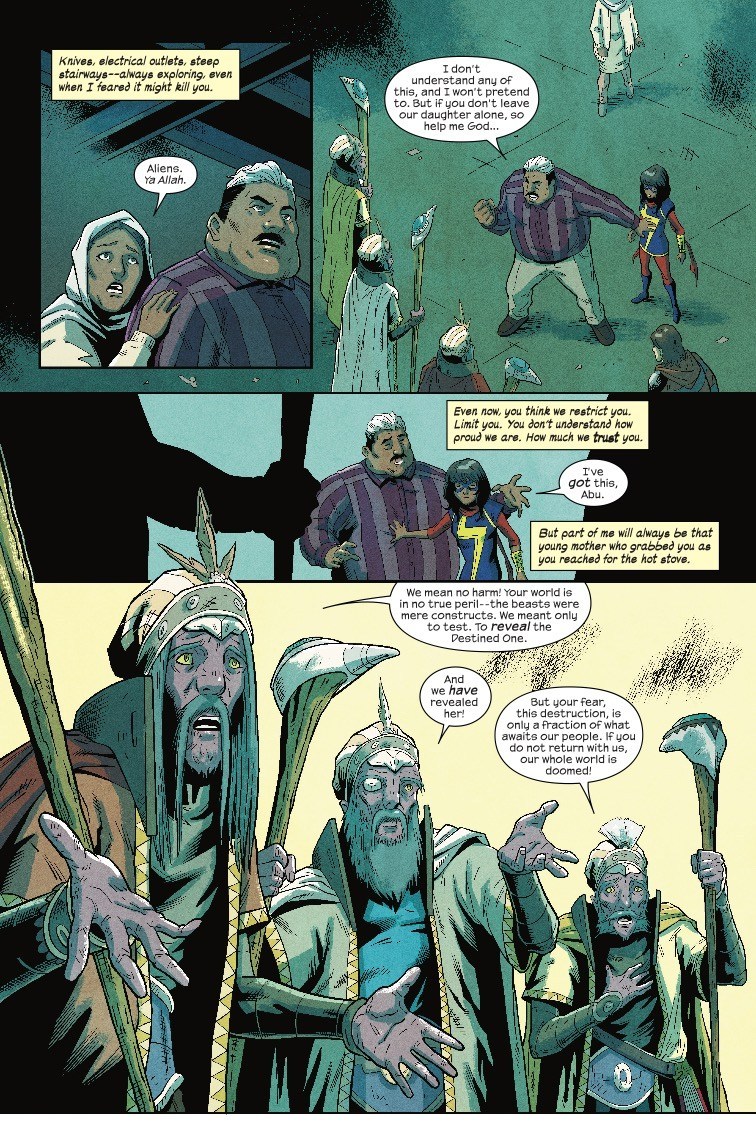 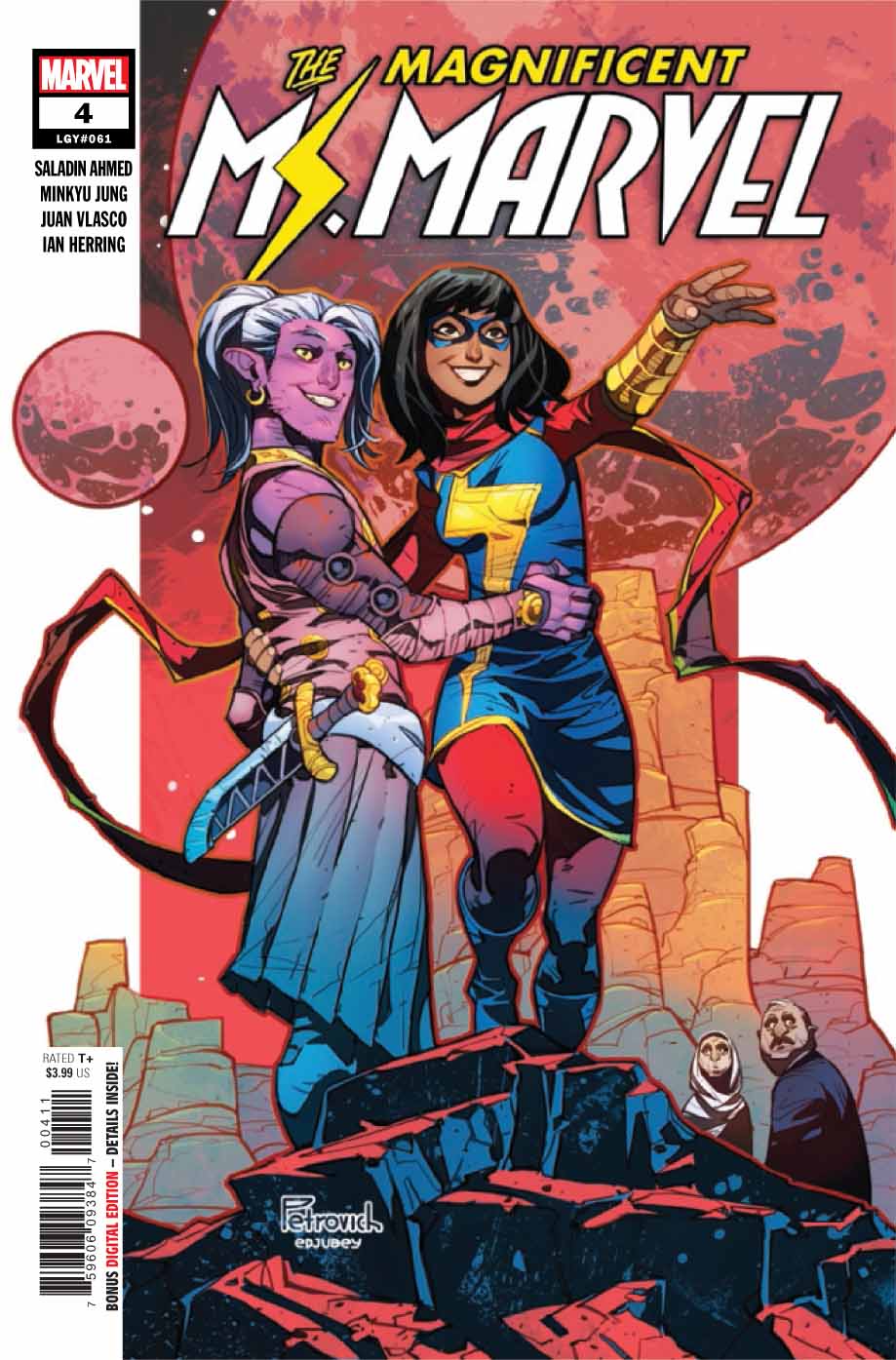 Description: Traipsing across an unfamiliar planet with a gorgeous alien prince is fun…but doing that with your disapproving parents in tow? Significantly less fun. Can Kamala balance family and romance? Or is this strange new relationship dead on arrival? 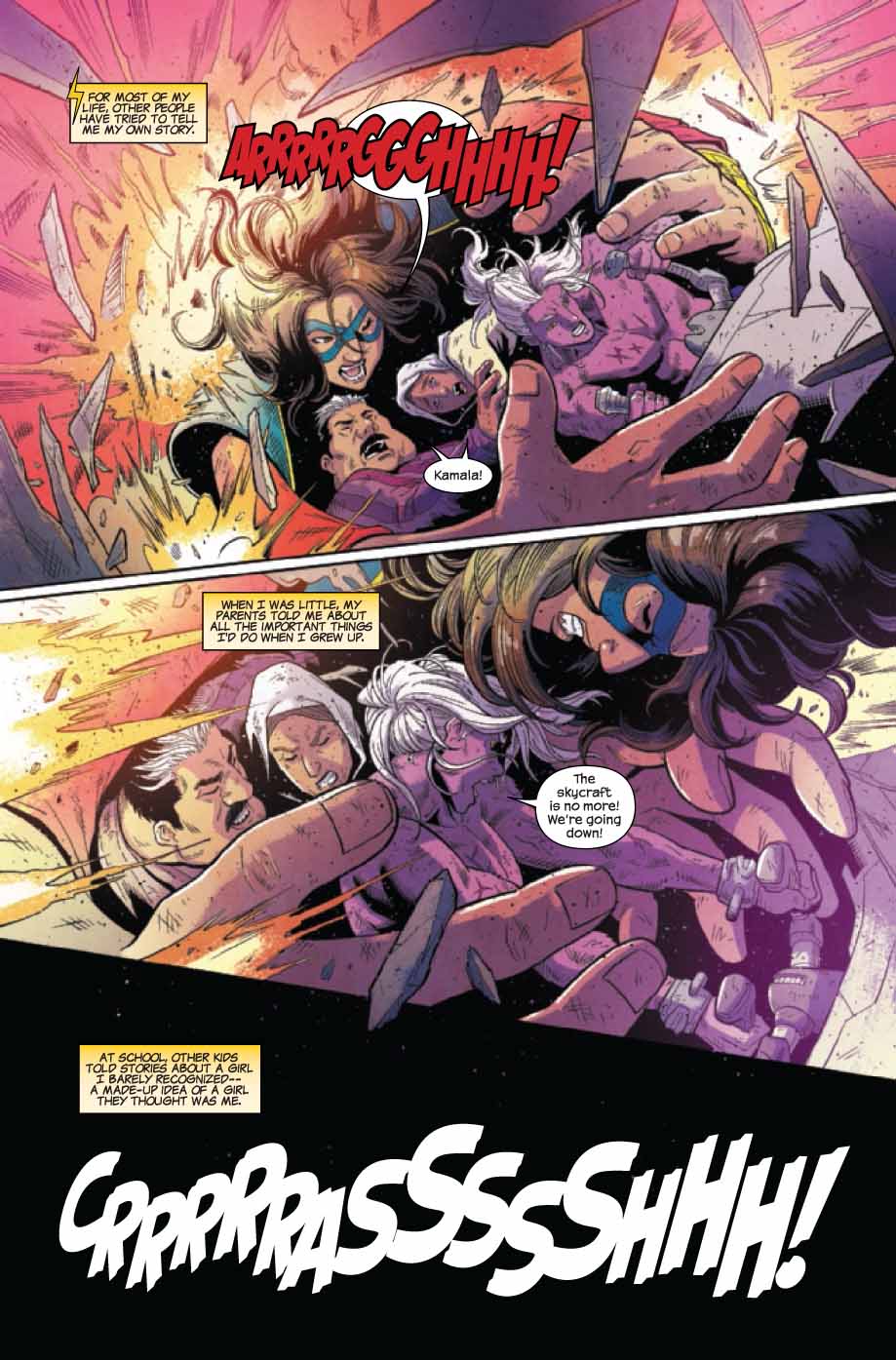 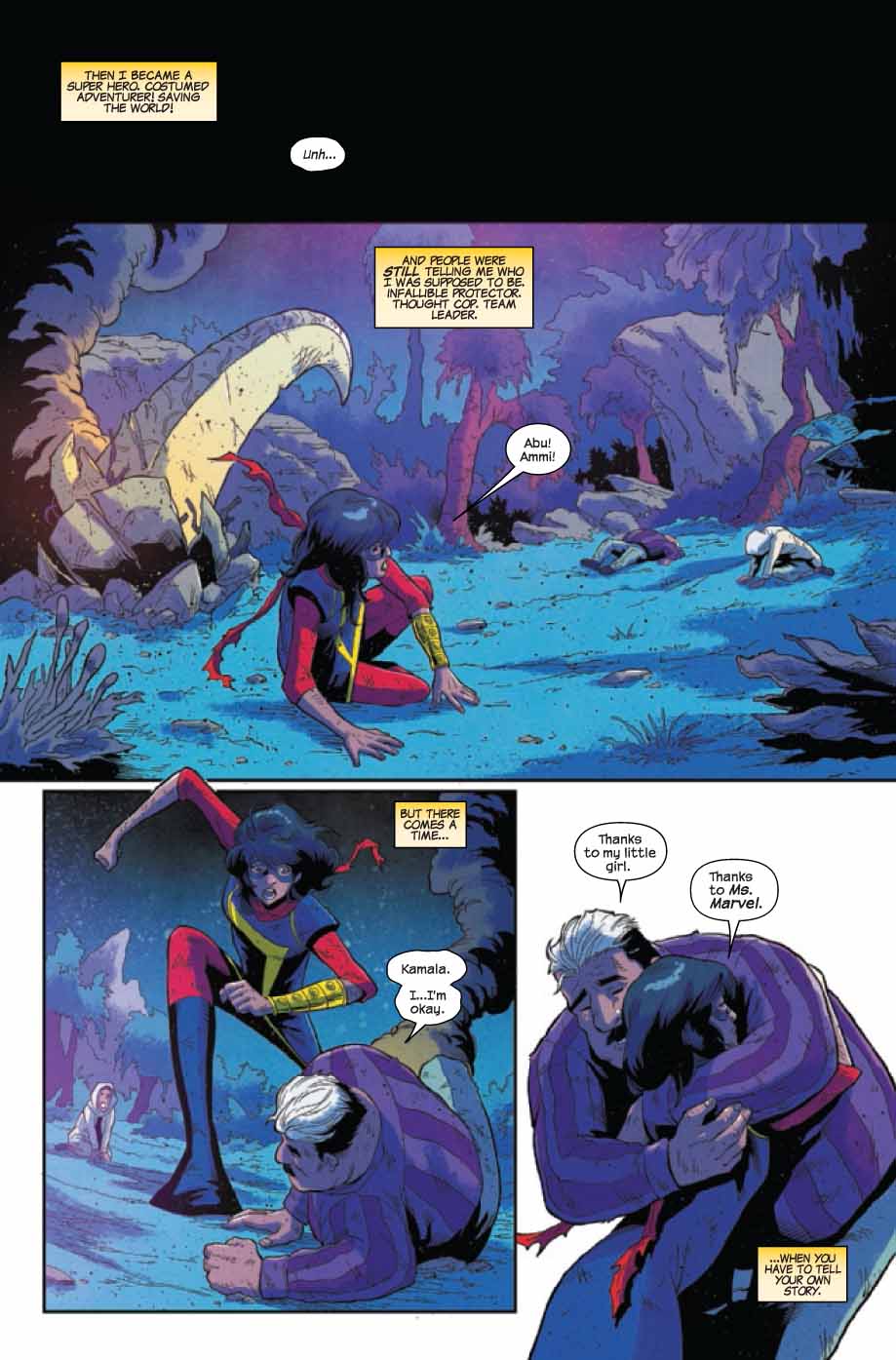 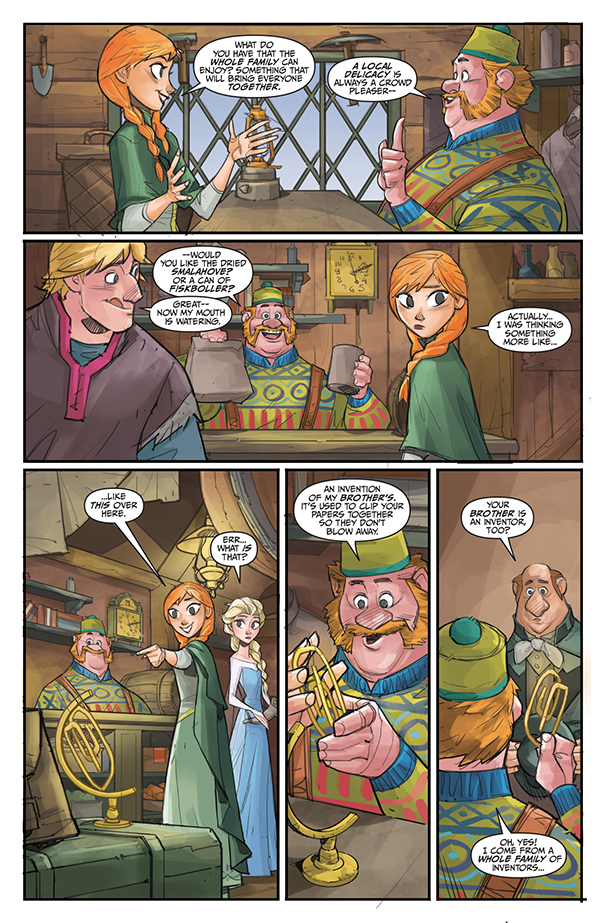 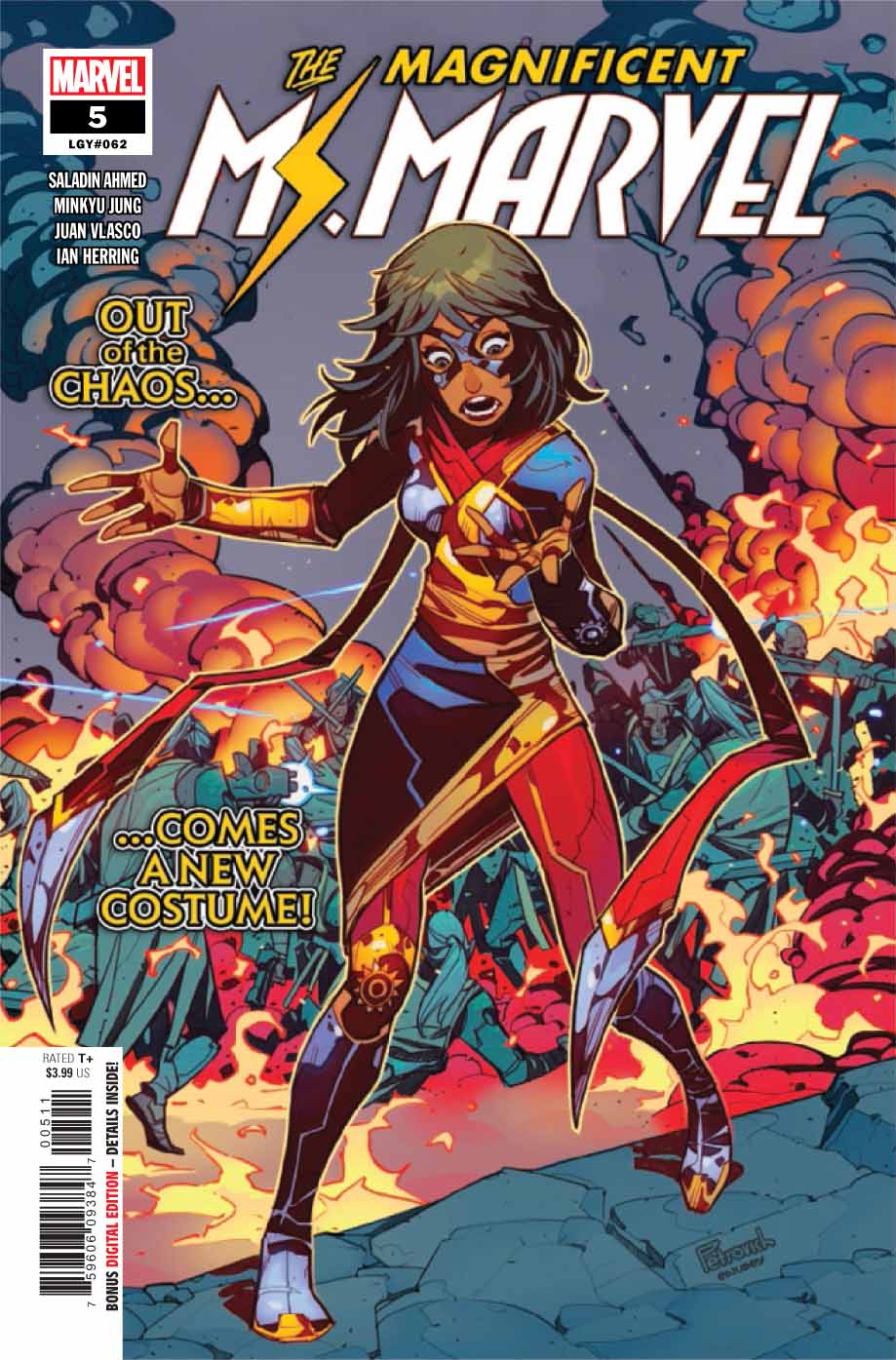 Description: Ms. Marvel reaches the explosive finale of her adventure in space and finds her life - and her costume - forever changed! Victory comes at a cost, and when it comes to paying up, Kamala may not have much choice in the matter… Plus! Kamala gets an awesome new costume! 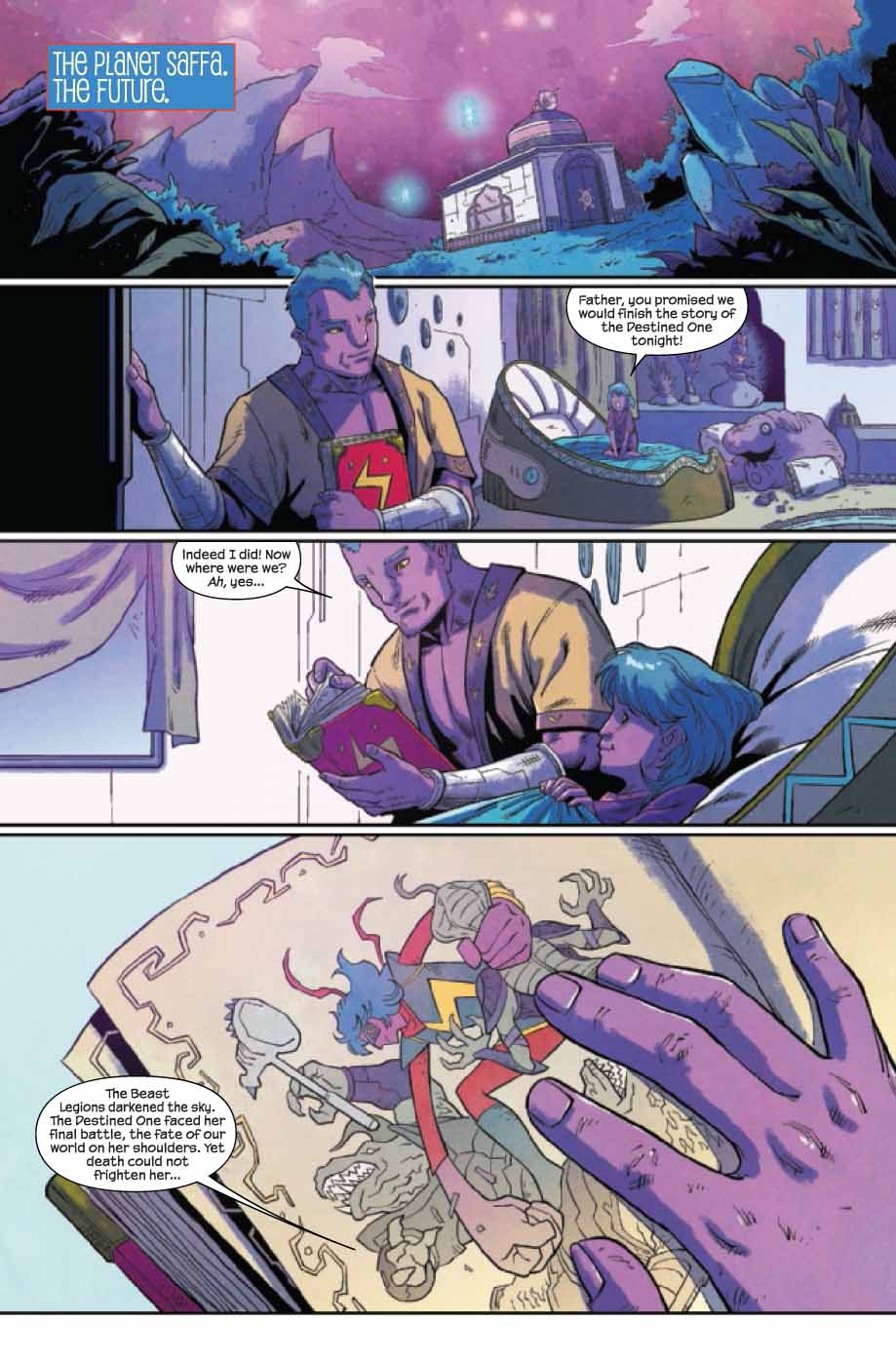 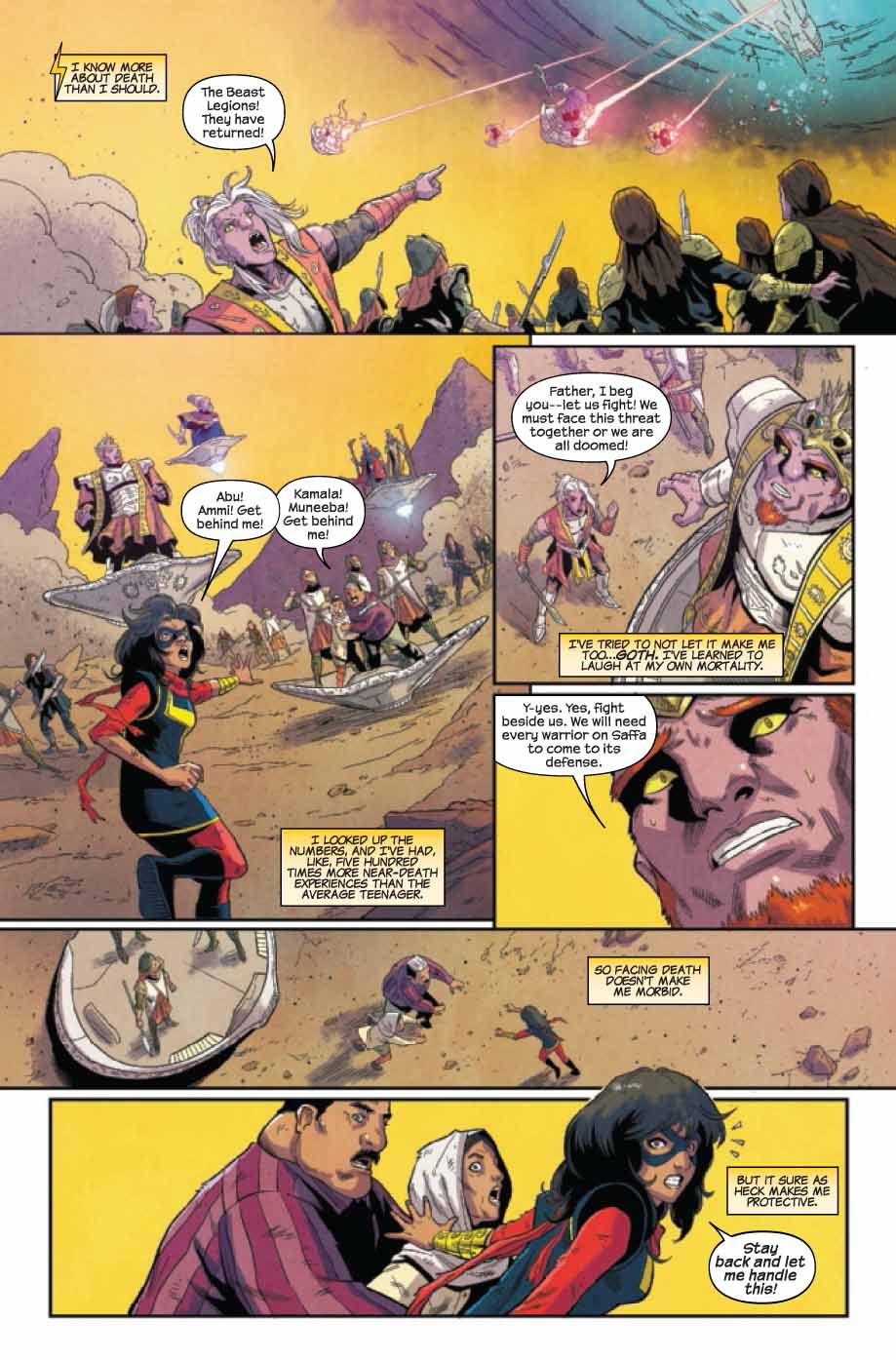 Description: Ms. Marvel is back in Jersey City after a whirlwind space adventure, just in time for a devastating personal tragedy to strike. But while her slick new costume can protect her from all kinds of threats, can it protect her from heartbreak? Guest-starring the Invincible Iron Man! 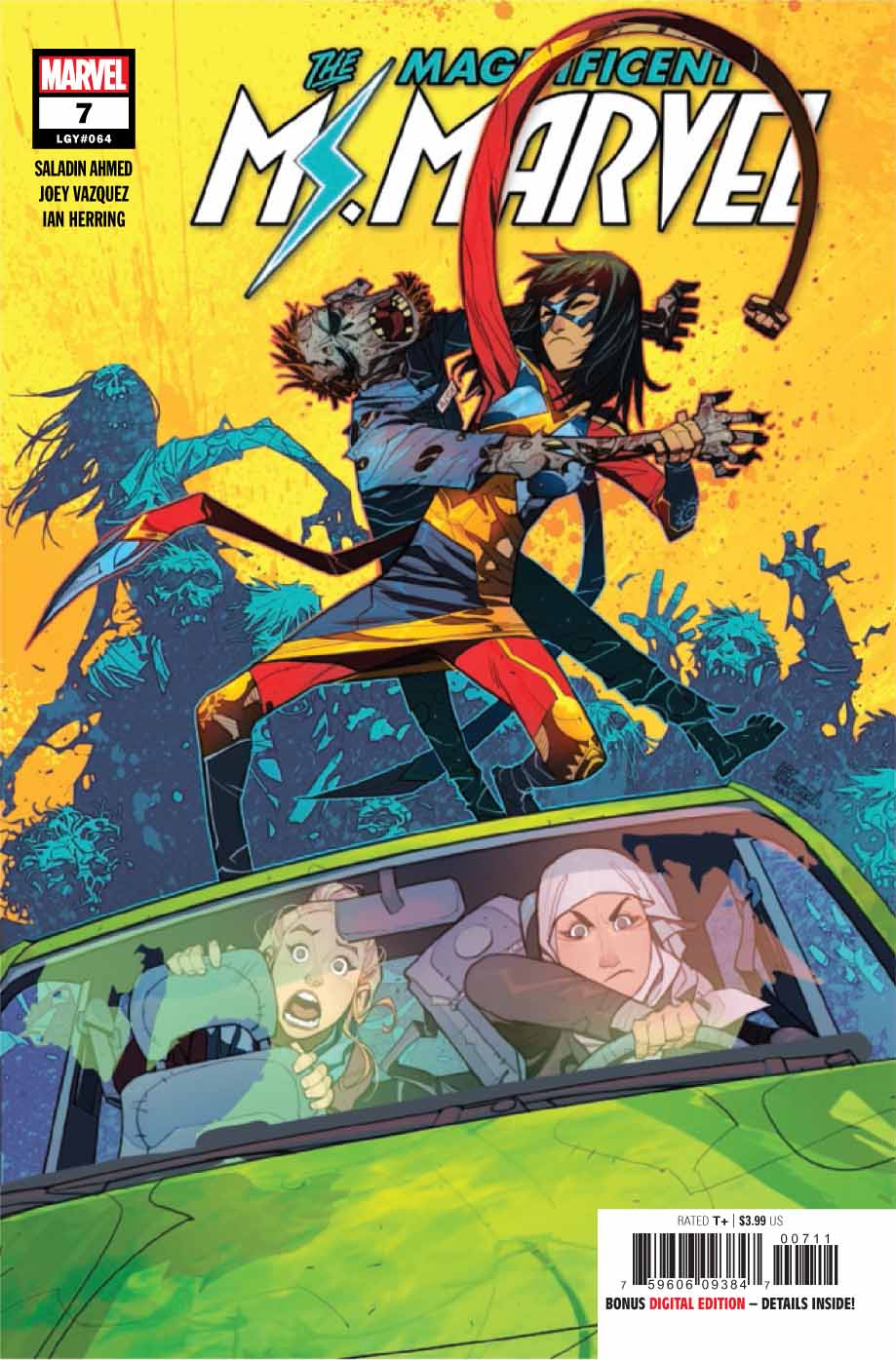 Description: Between her space adventure, her complicated feelings for Bruno and a looming family tragedy, Ms. Marvel really needs a break. Zoe and Nakia decide to get Kamala out of town for a while – but their chill road trip is about to be derailed…by literal corporate zombies! 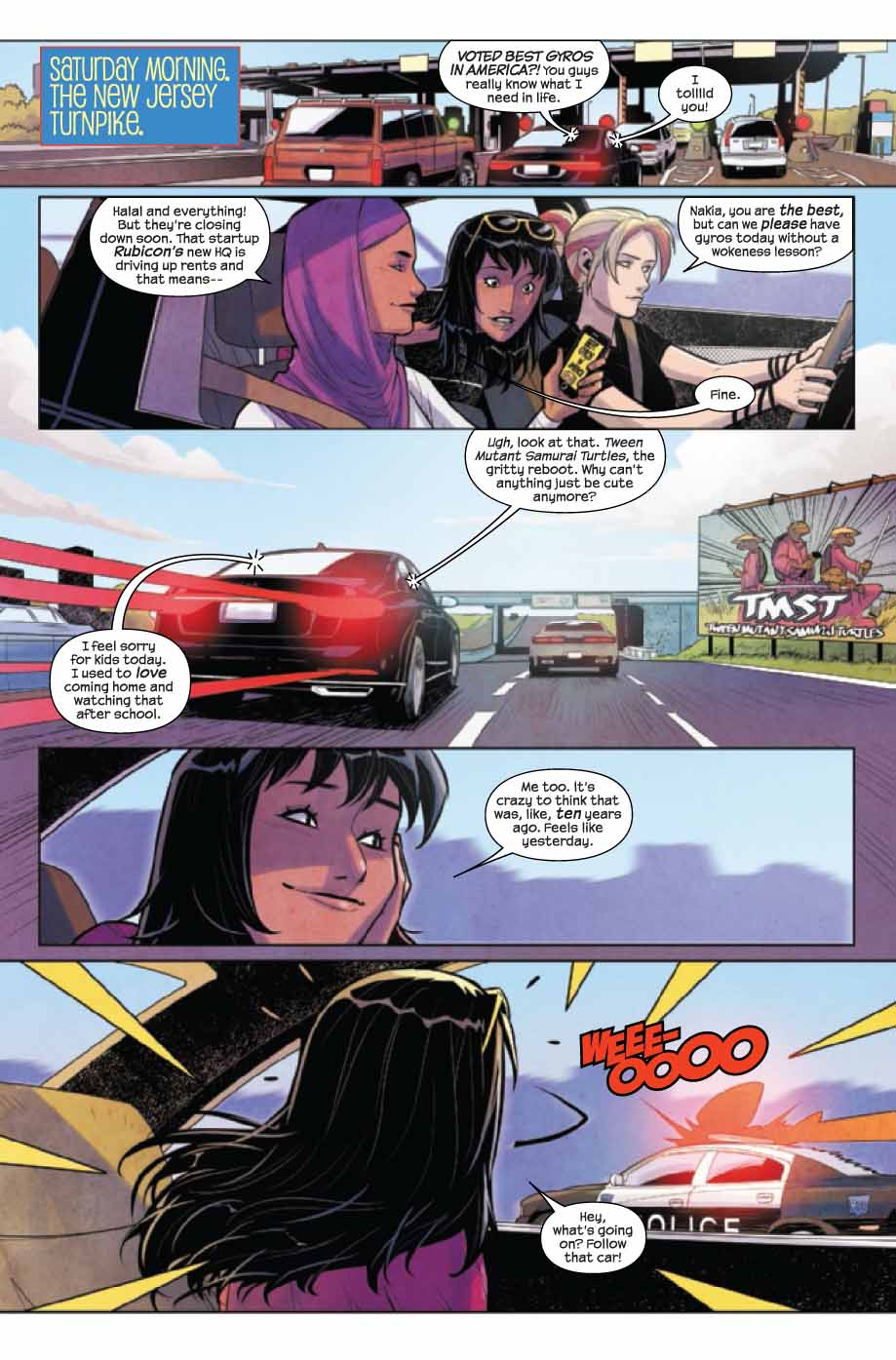 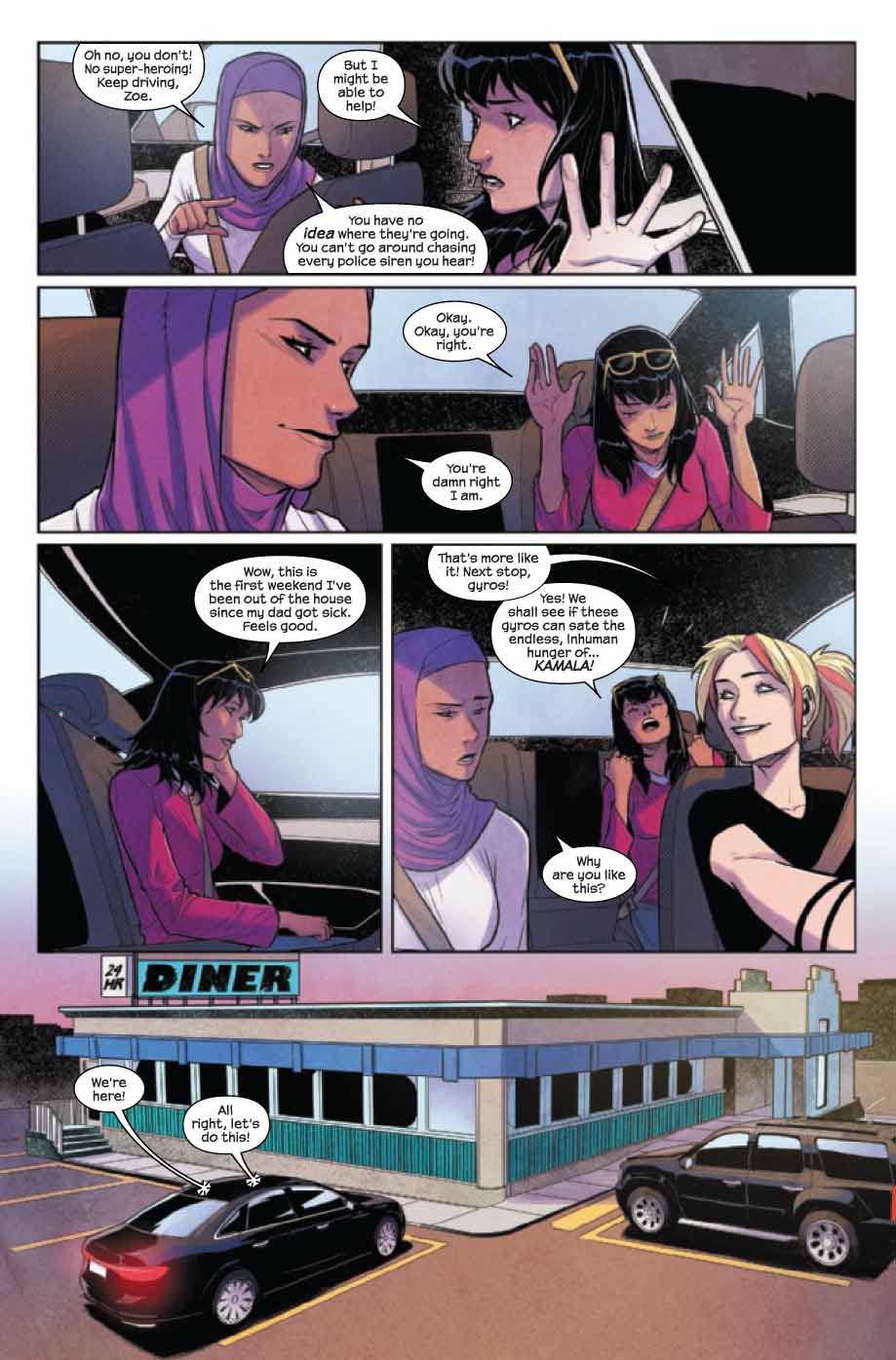 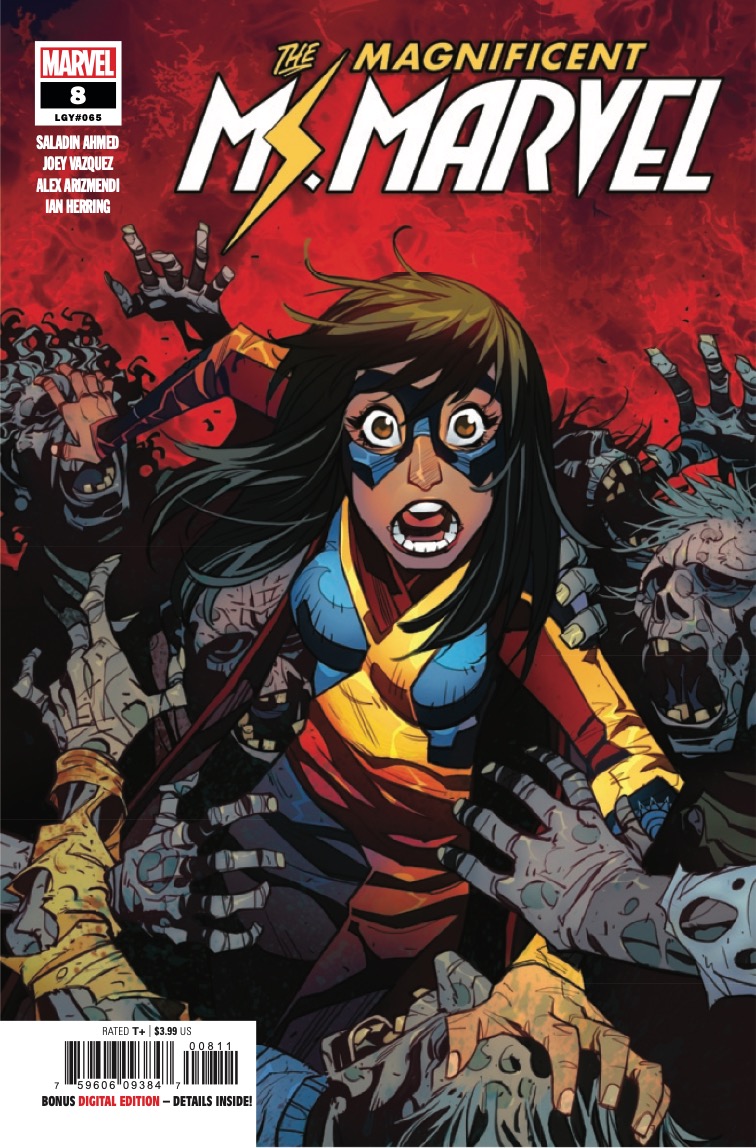 The villainous MONOPOLY has his sights set on Ms. Marvel, and his new recruits DISCORD and LOCKDOWN are more than happy to deliver her on a silver platter. Can Kamala survive a zombie invasion AND an all-too-literal corporate merger? 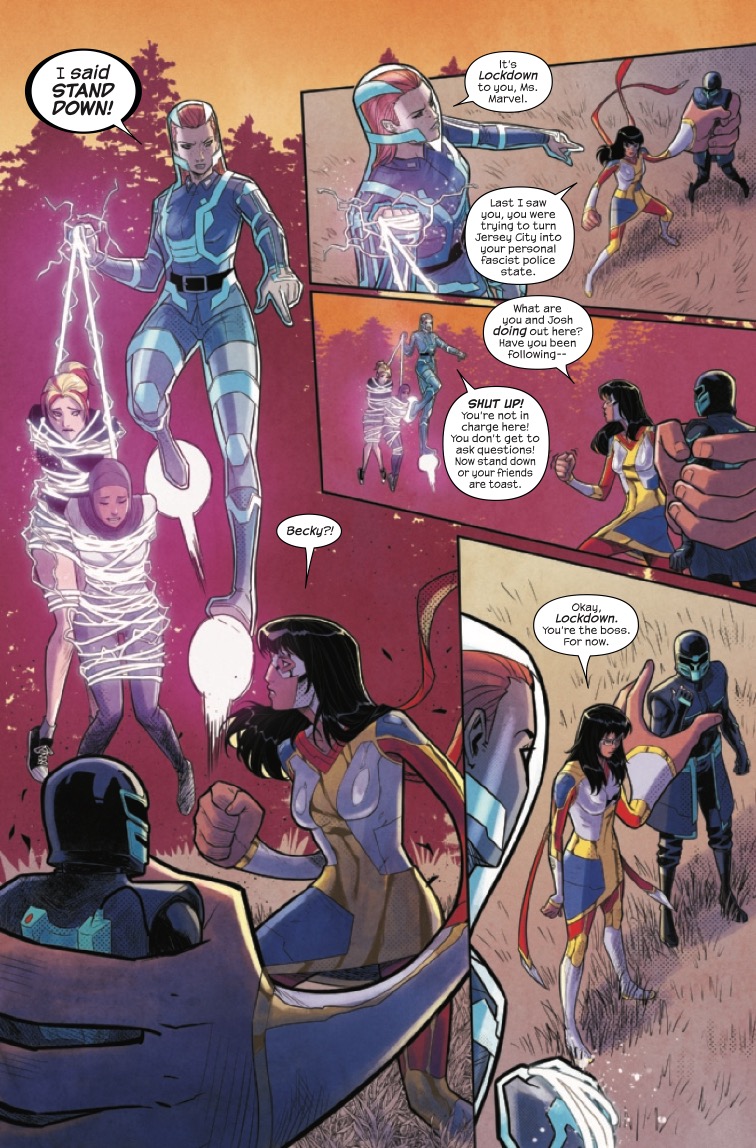 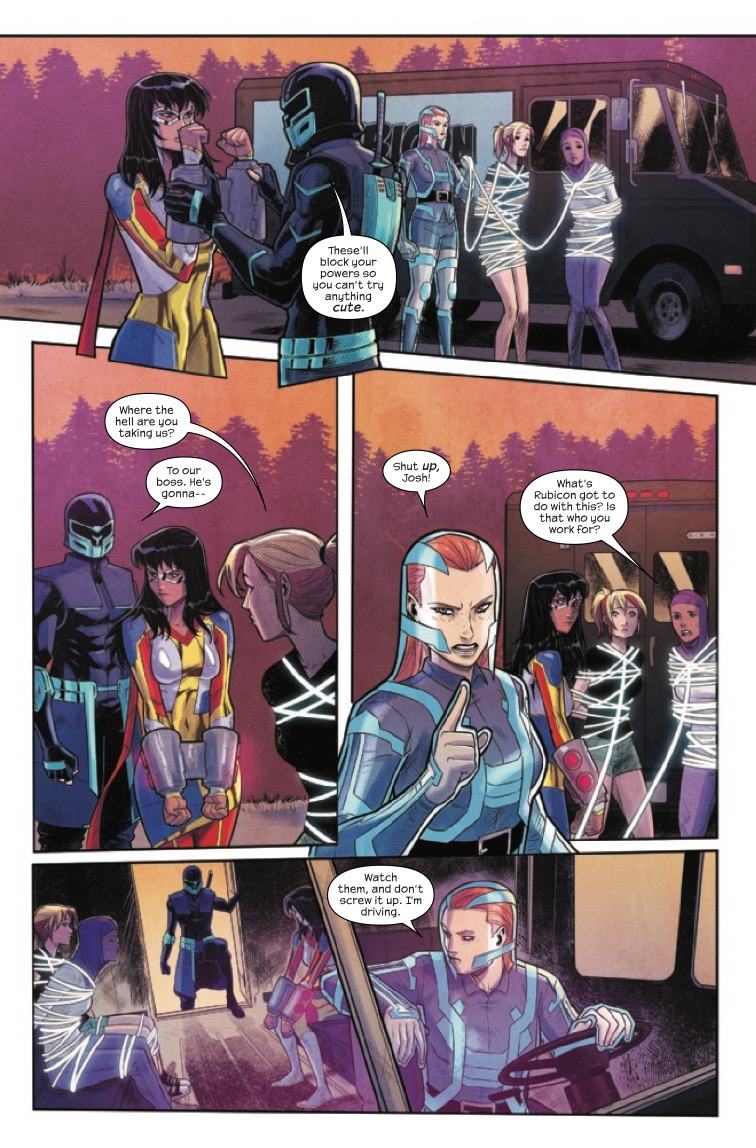 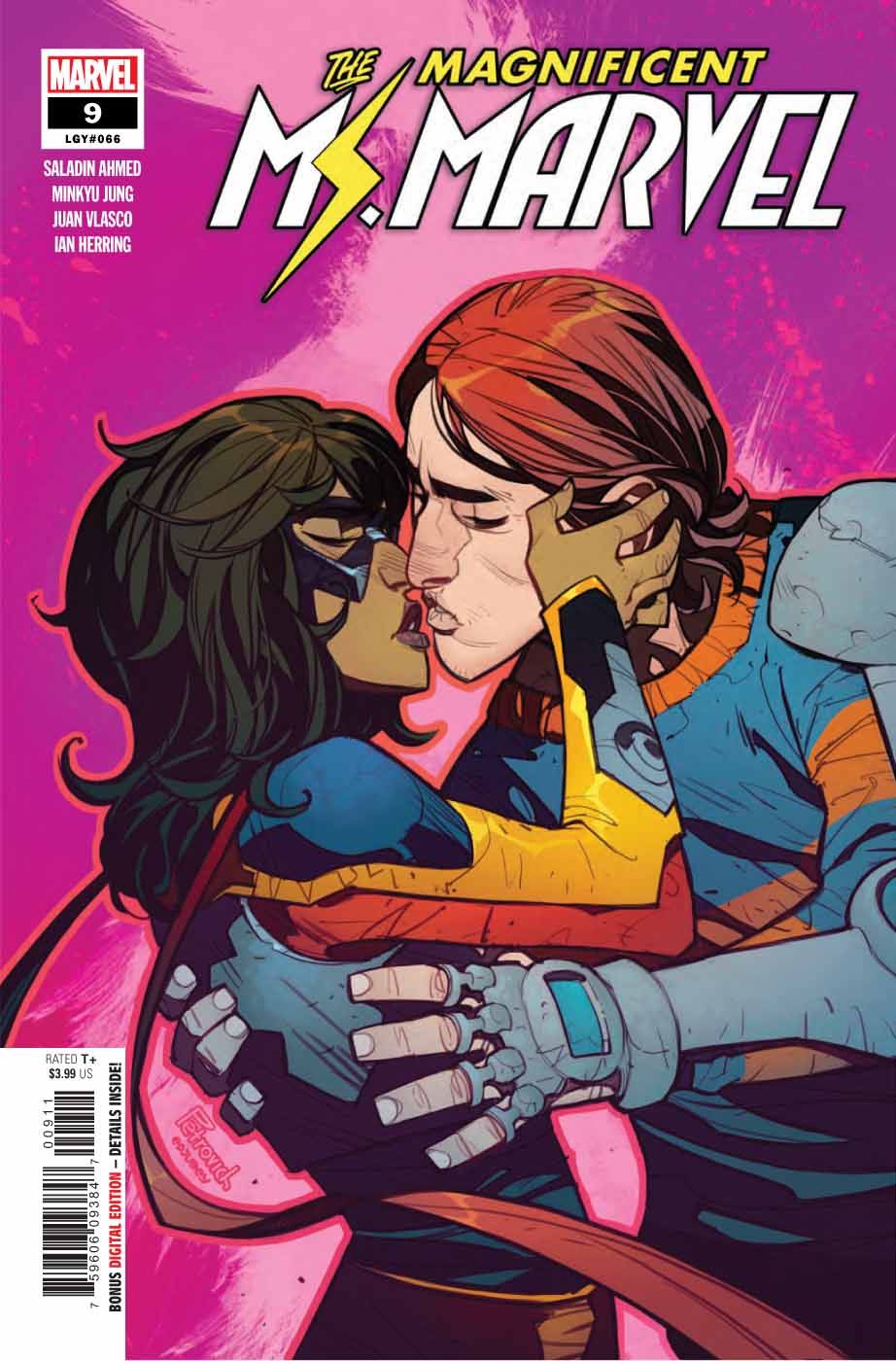 Description: Disaster strikes Ms. Marvel’s family, drawing Kamala and Bruno closer together than ever before. Are these two best friends about to become something more? Or will Kamala’s duties as Ms. Marvel come between them? Brace yourself for a whirlwind issue that will change Ms. Marvel forever! 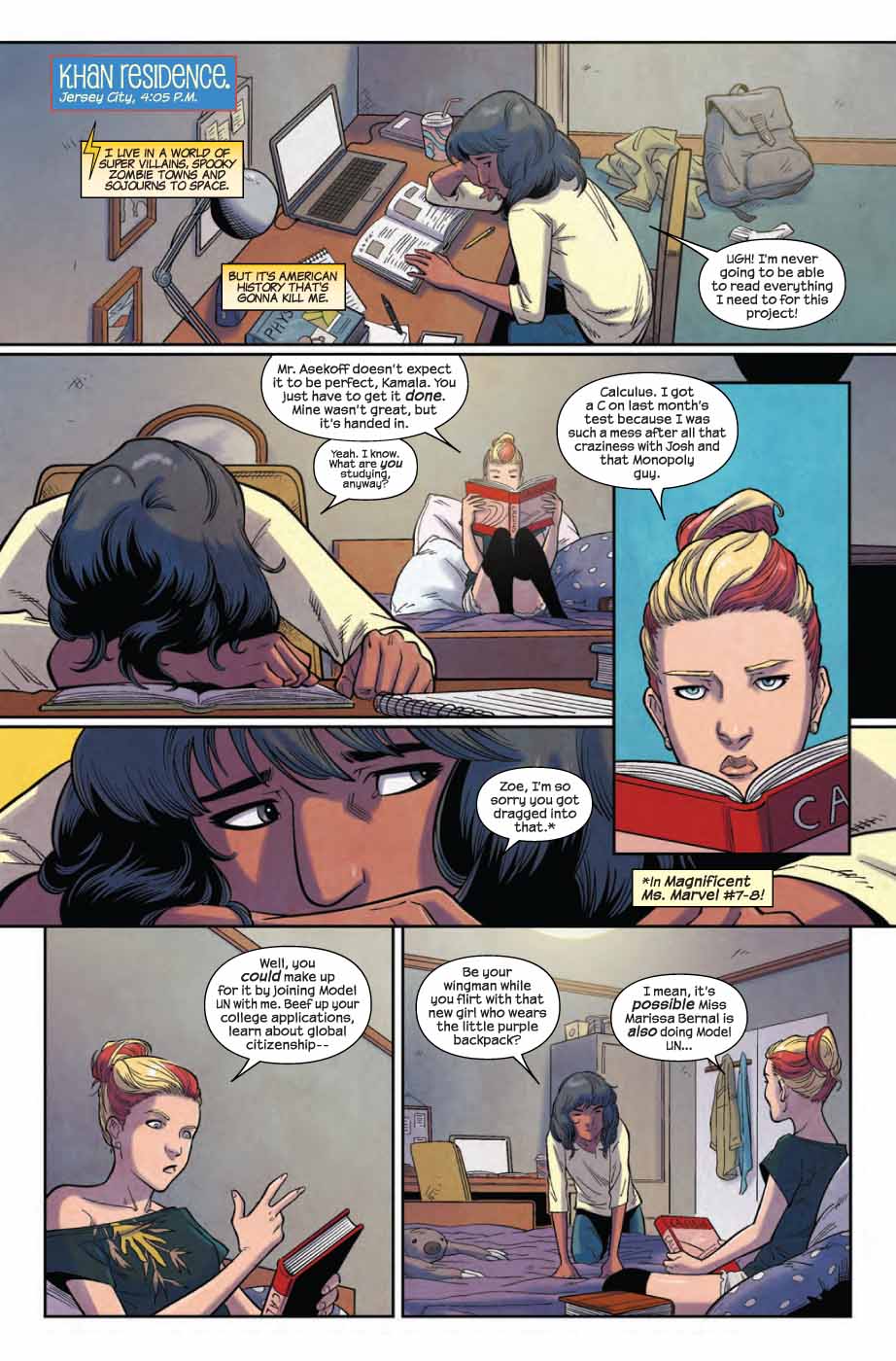 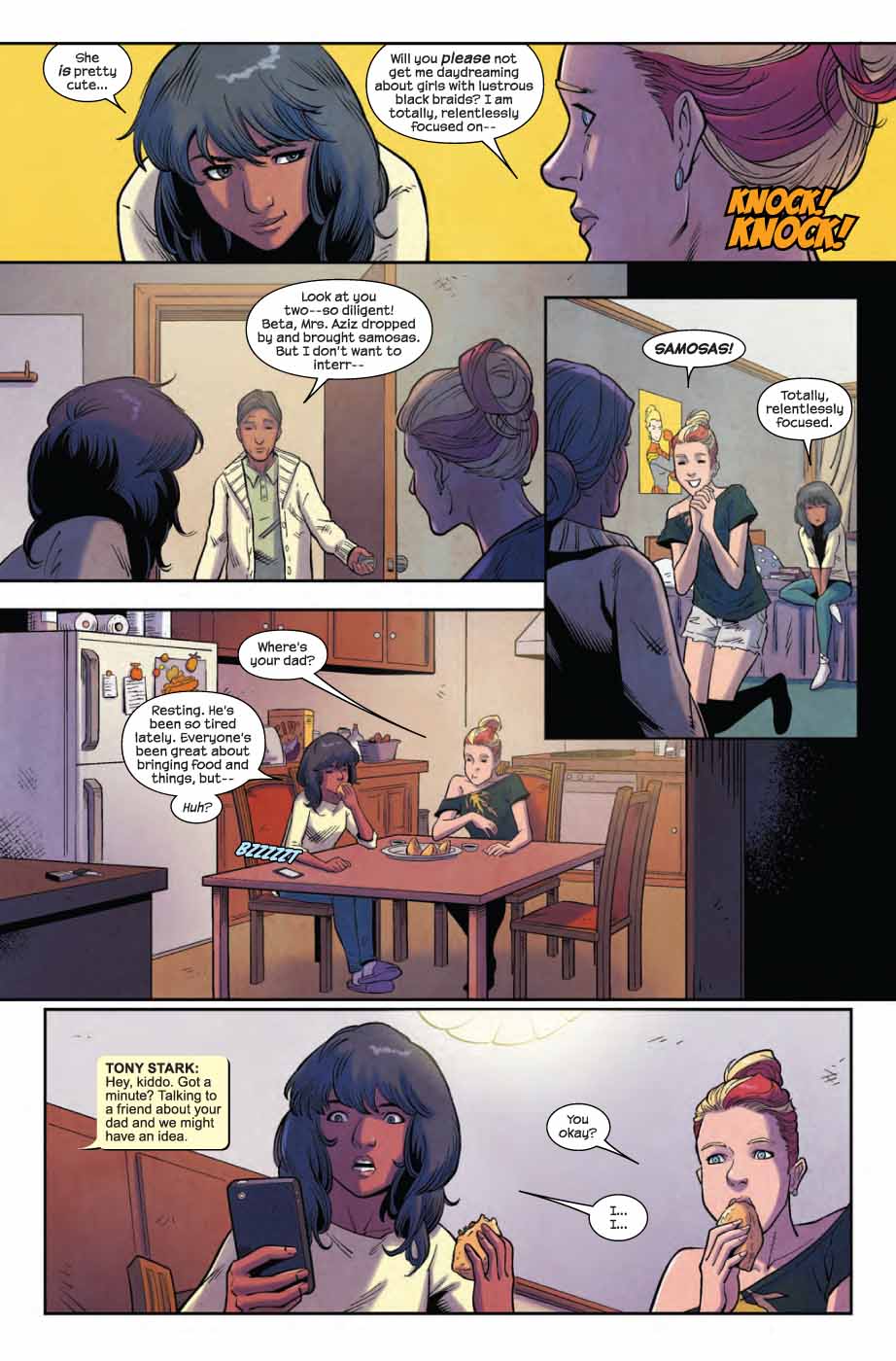 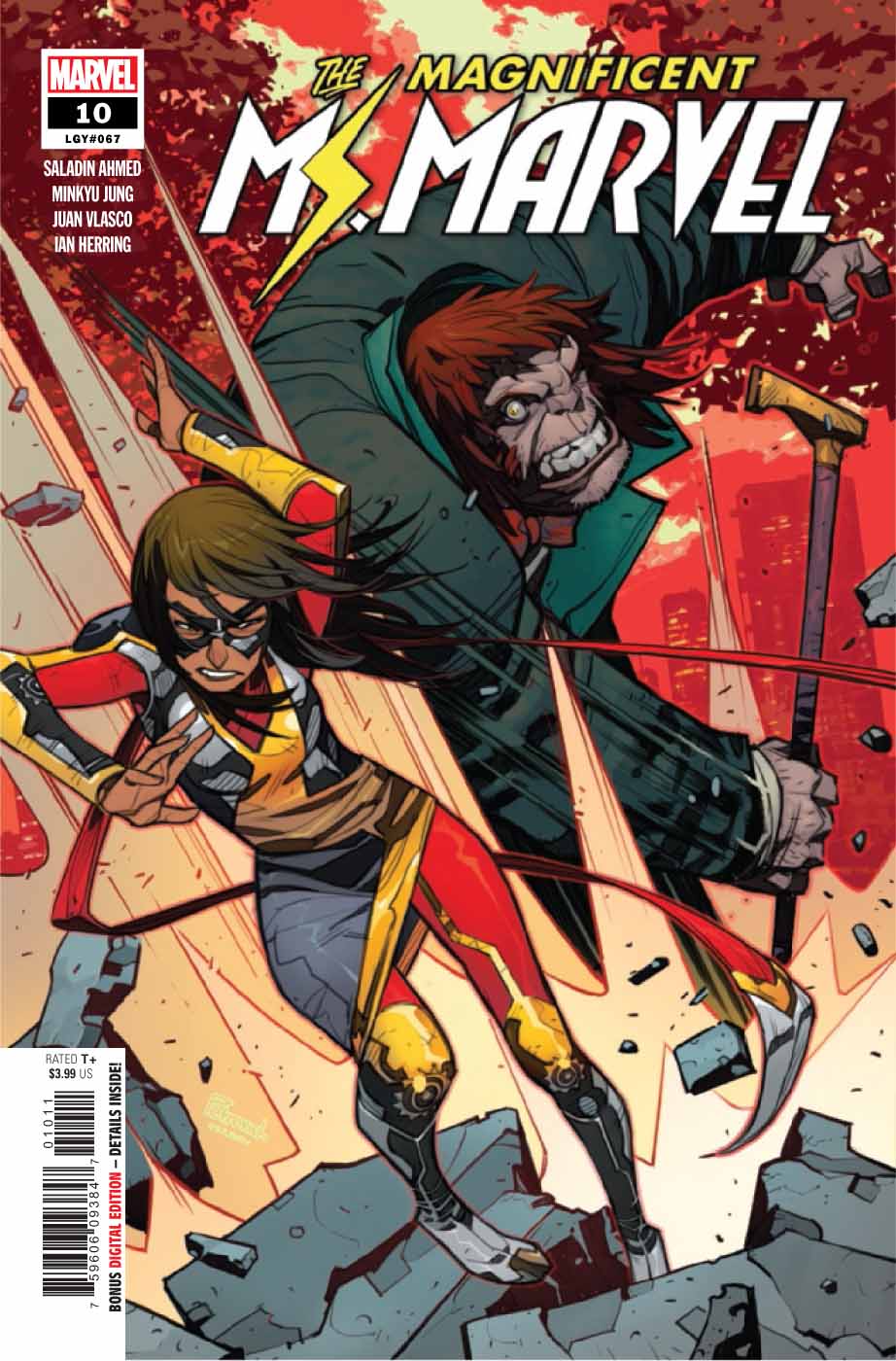 Description: While Doctor Strange tries desperately to save the life of Kamala’s father, Kamala is forced to abandon her tragedy-stricken family to thwart Mr. Hyde’s rampage through Jersey City. With her new suit, she may just have the power to stop him…but does that power come with a cost? 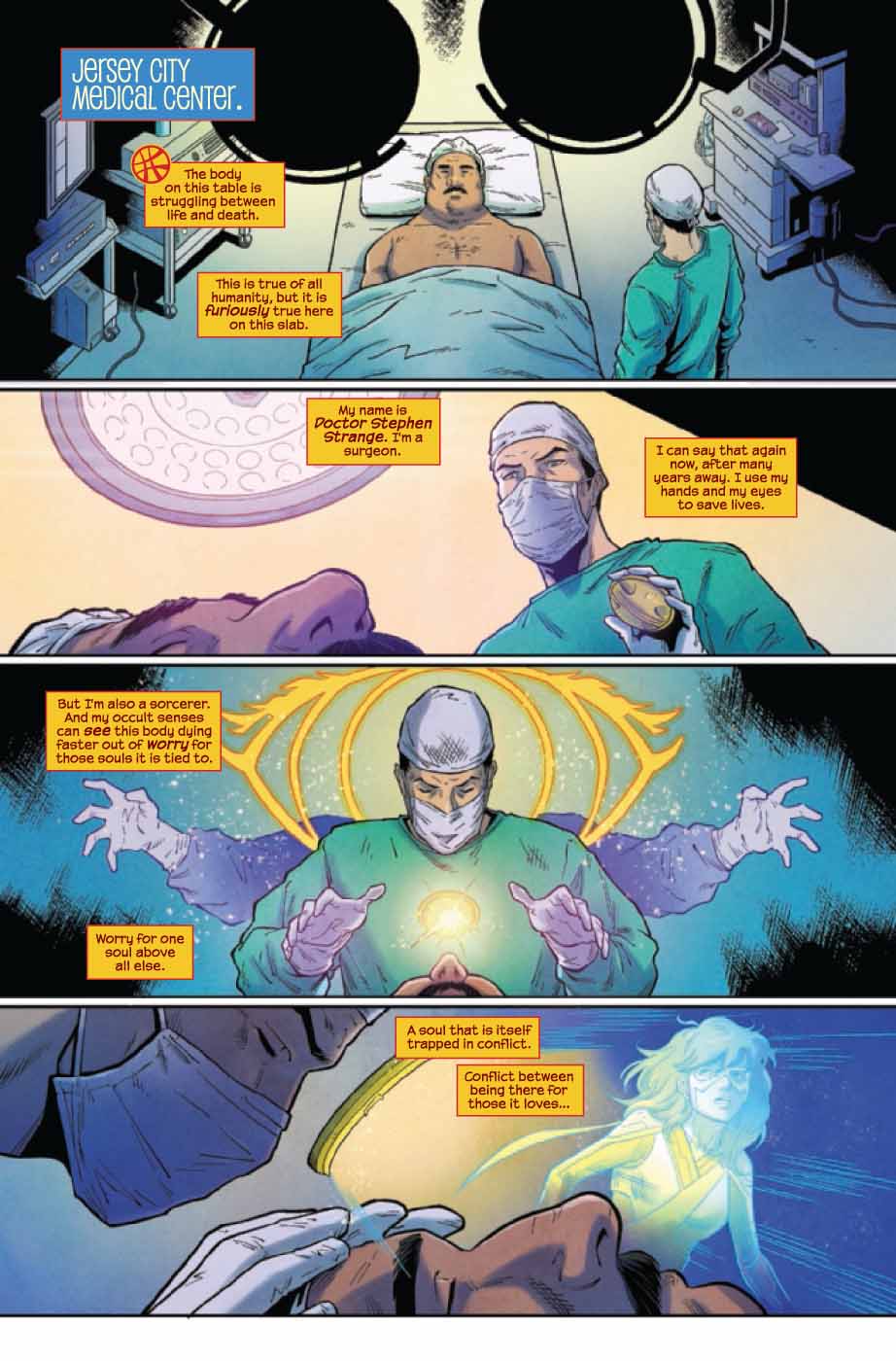 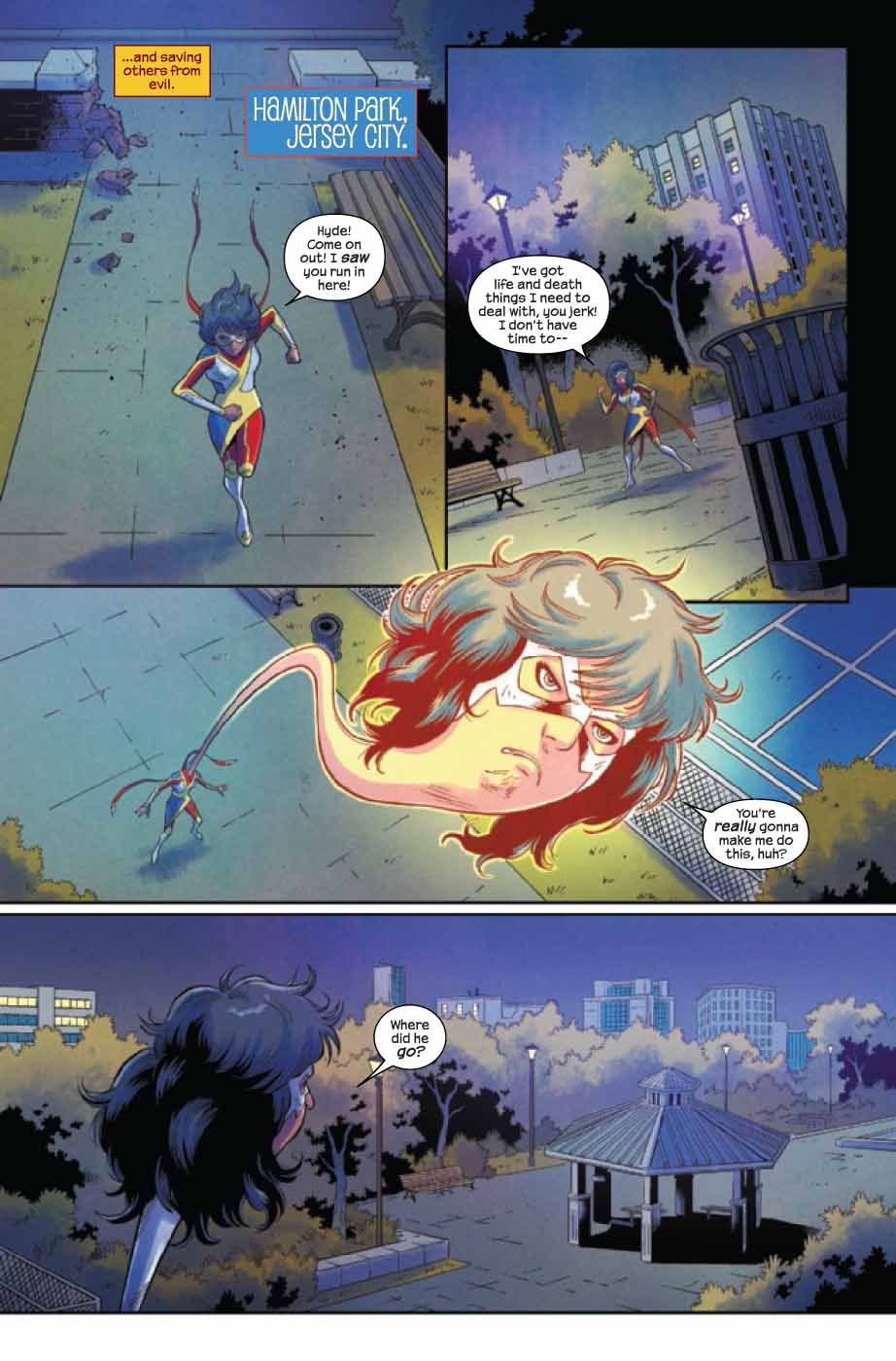