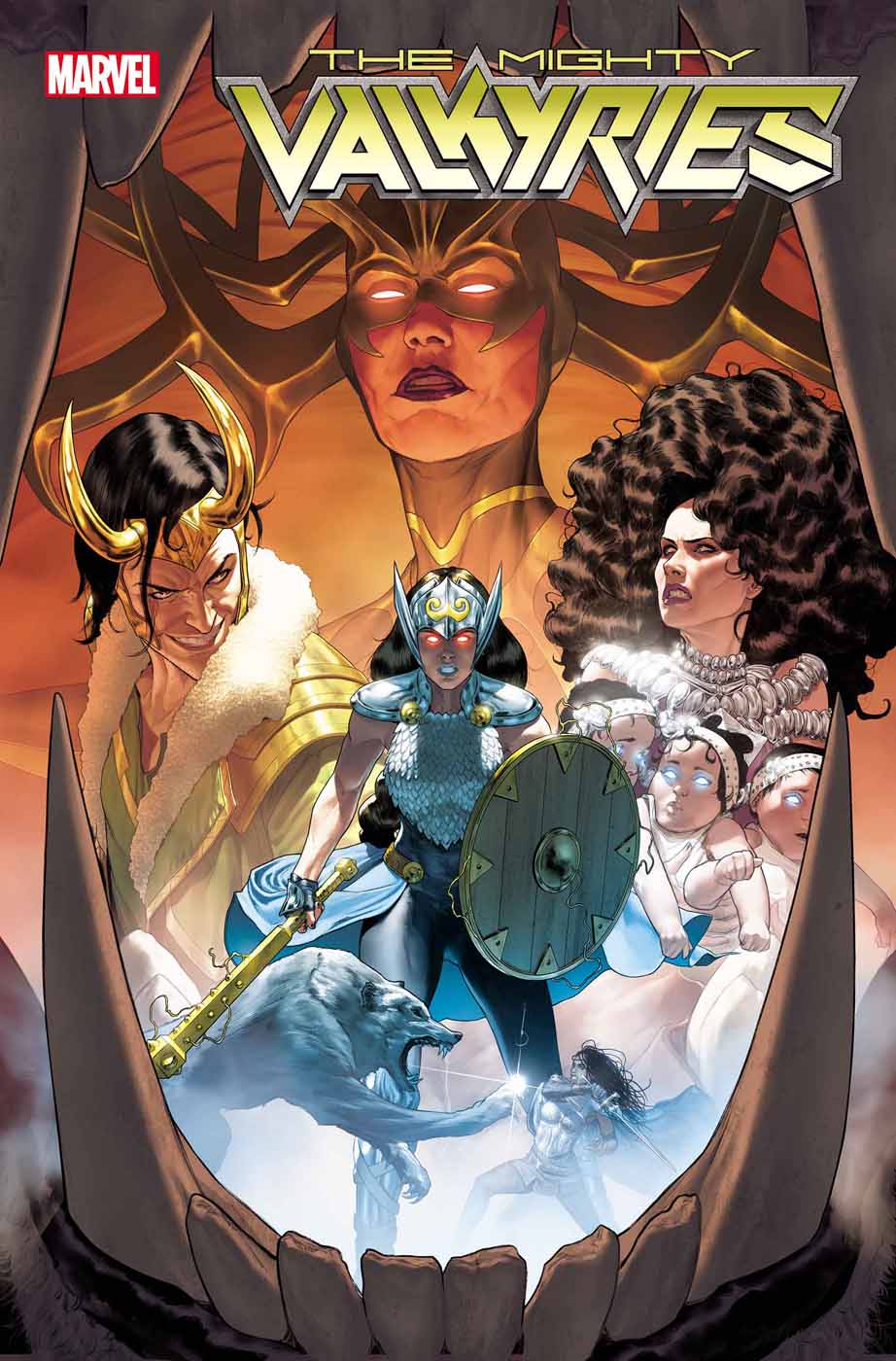 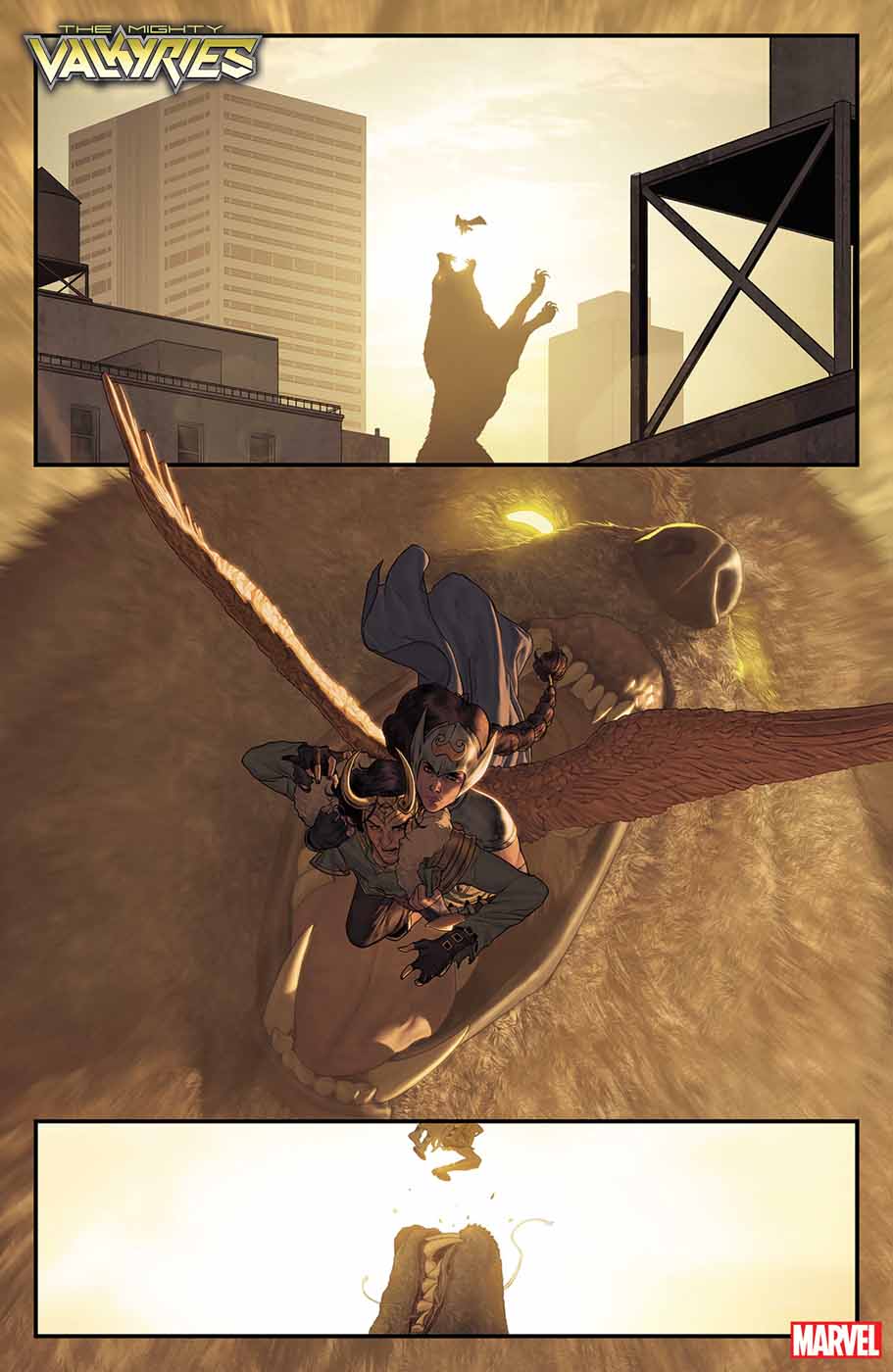 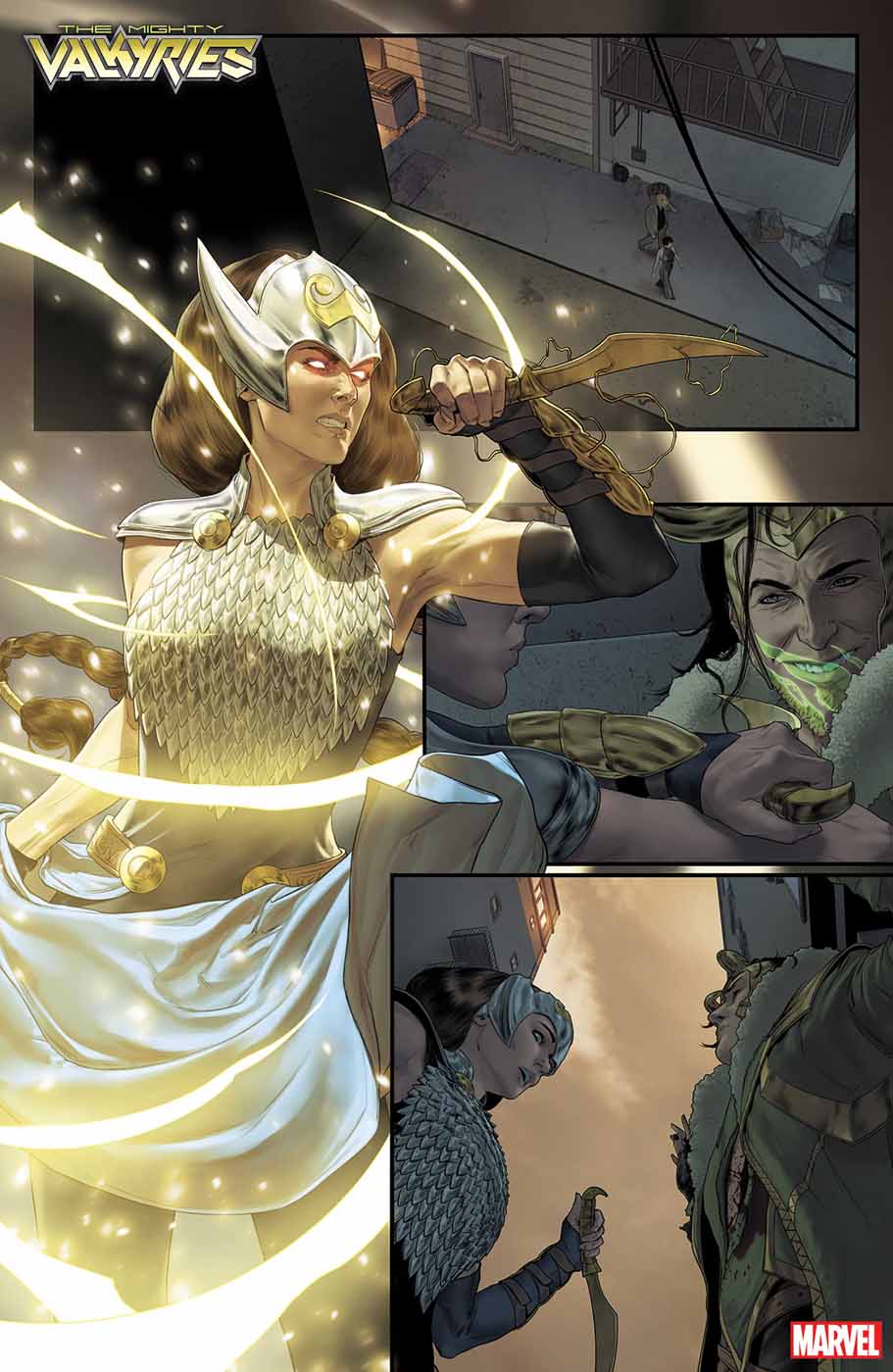 "Jane Foster believed she was the only Valkyrie left – but the fight against Knull, the King in Black, proved her wrong. Now the Valkyries must redefine their roles in a changing world – and Asgard’s not going to make it easy. When Loki comes to Jane with rumors of a beast stalking the souls of Midgard, she leaps into action along with the mysterious new Valkyrie who just made her highly-anticipated debut in King in Black: Return of the Valkyries #1. But does Jane’s new ally have other priorities? Years ago, this ancient warrior made a promise to a woman she loved. And now, it’s time for her to follow through.

« This story is big, cosmic, and mythical, » Gronbekk said. "The wolves are let loose, an old god is back, and life is finding its way into Hel. People are dying on Midgard, and even Loki has a part to play – which is rarely a good sign for, well, anyone but Loki. Though our Valkyries begin the journey in two different galaxies, their paths soon meet. But there are twists and turns in their way, and nothing and no-one is quite what they seem. They will have to ask the right questions and make hard choices before they can unravel the mystery they both find themselves in.

"I could say that it’s a story about ancient magic, dying worlds, talking horses, and forgotten forces, and while that would all be true, it’s also about finding back to life – after loss, illness, stagnation, and imprisonment.

« And, look, I’ve never been more excited about a book. Writing Jane is always a joy, and the newest Valkyrie – or the oldest, if you will – is proving herself a bad-ass delight. Mattia De lulis is taking every opportunity to show that he’s not only a brilliant artist but a masterful storyteller, and I’m in awe of the work he’s doing on these pages. This book feels very much like a labor of love, and I’m so thrilled we finally get to share it with the world! » 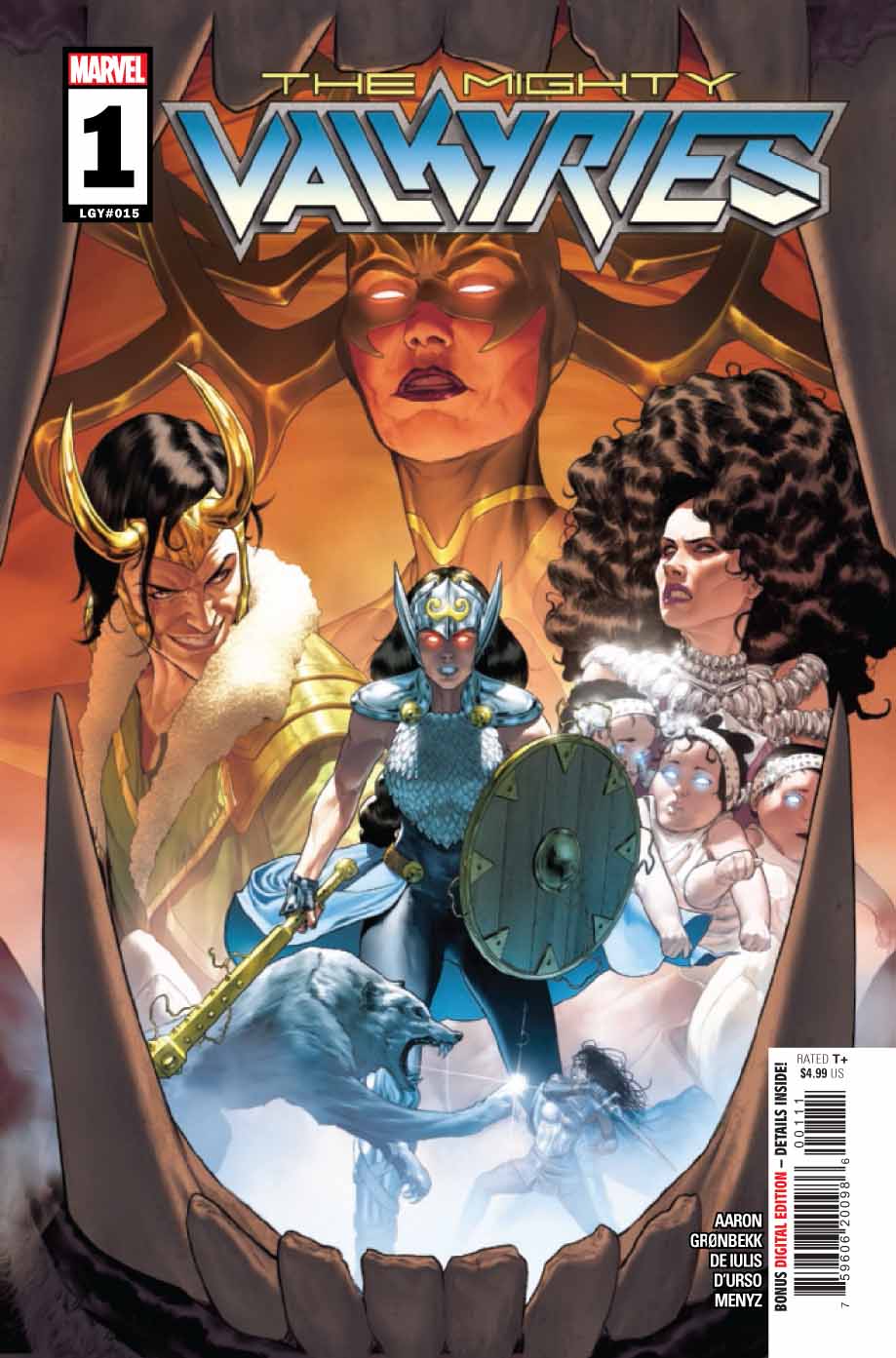 Description: Jane Foster gets a fresh start - and allies both new and old! Jane Foster believed she was the only Valkyrie left - but the fight against Knull, the King in Black, proved her wrong. Now the Valkyries must redefine their roles in a changing world - and Asgard’s not going to make it easy. When Loki comes to Jane with rumors of a beast stalking the souls of Midgard, she leaps into action - but she’s not the only one after the strange wolf’s hide. She’ll need backup…but her ancient coworker has other priorities. Years ago, the warrior made a promise to a woman she loved. And now, it’s time to follow through. Get the real story behind the Marvel Universe’s newest star. 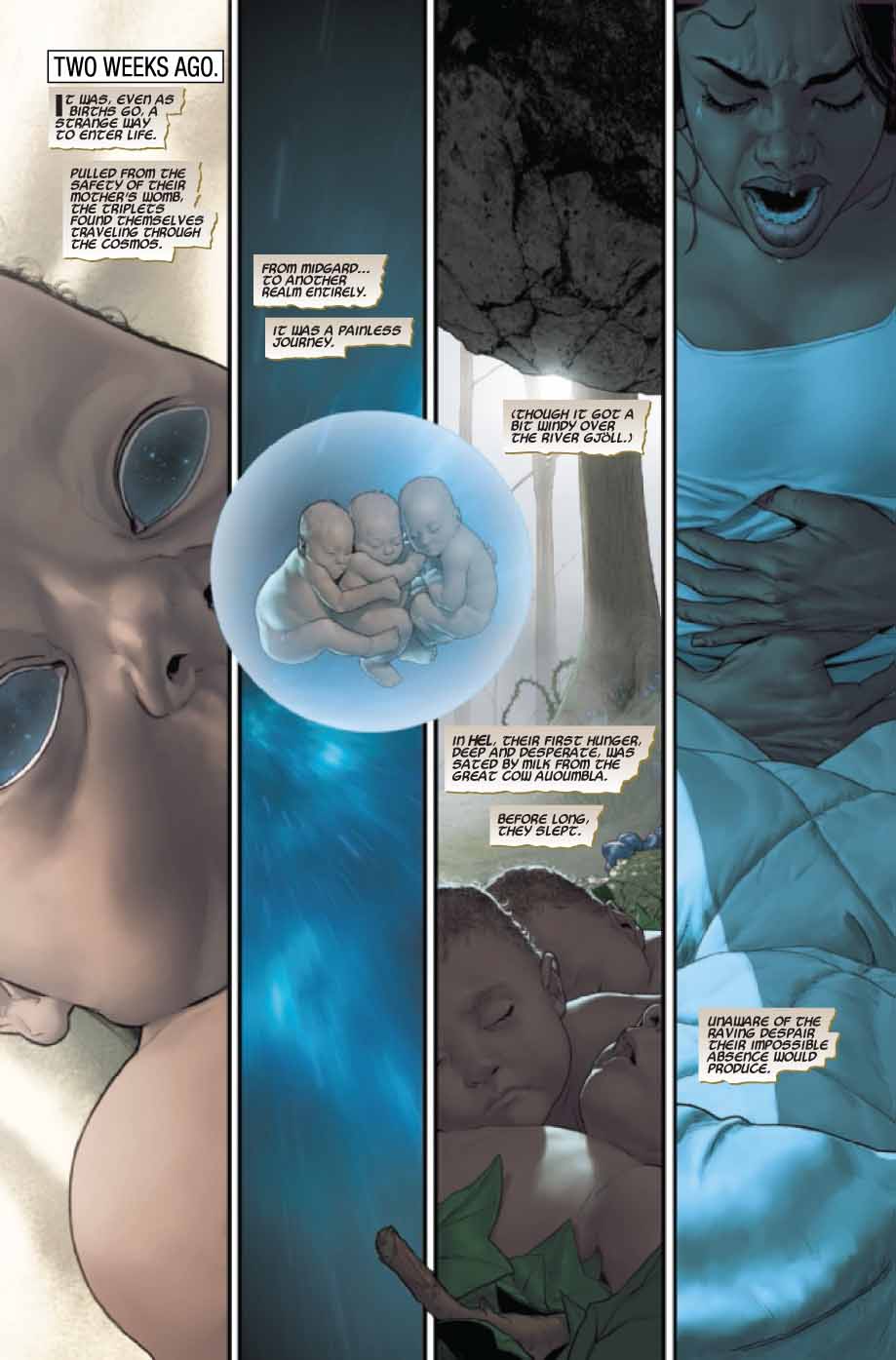 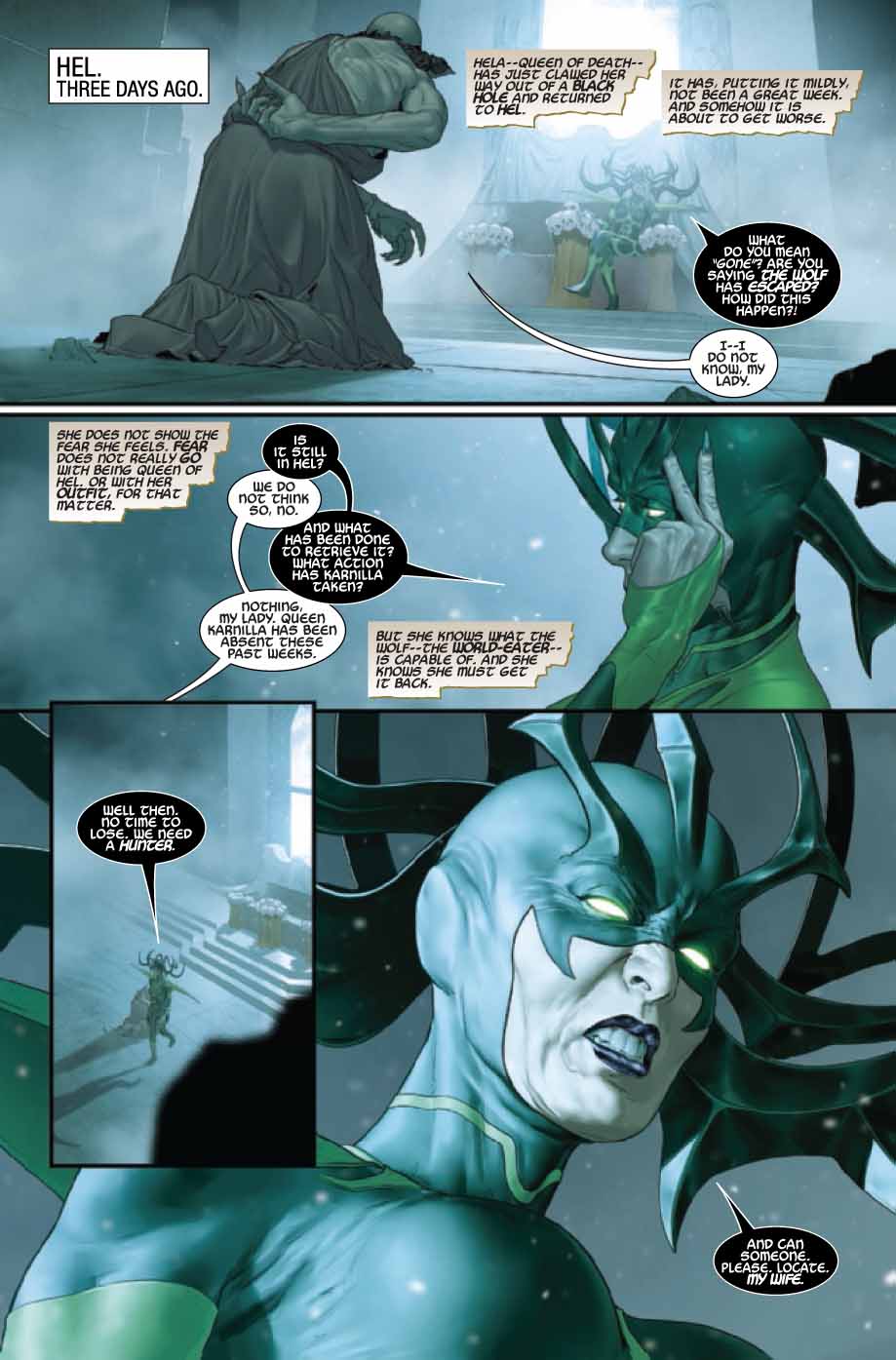 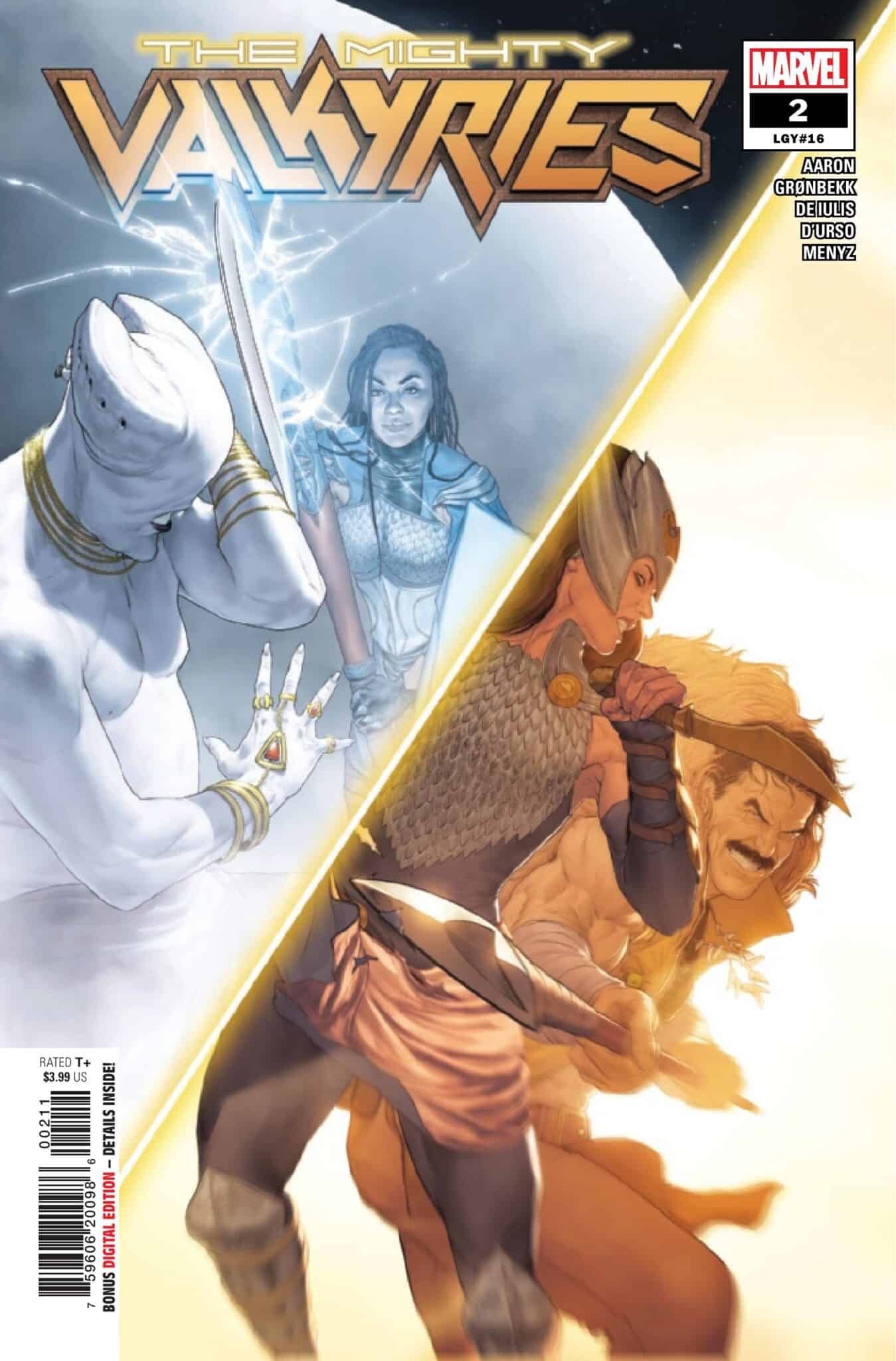 (W) Jason Aaron, Torunn Gronbekk (A) Mattia De Iulis, Erica D’Urso, Marcio Menyz (CA) Mattia De Iulis, Peach Momoko
THE MYSTERY OF THE NEWEST VALKYRIE UNFOLDS!
The biggest new addition to the Marvel Universe finally fulfills a promise years in the making! On the planet of Perdita lives an ancient power - imprisoned. Leashed. Valkyrie goes to free it - and herself. And she must work quickly, for back on Midgard, Jane Foster has fallen into the sights of Kraven the Hunter! The killer stalks a beast from another plane, one whom Loki claims threatens the lives of every mortal. But there is more to this creature than meets the eye. Can the gaze of a Valkyrie reveal the secrets behind the wolf and his unearthly origin?
Rated T+
In Shops: May 19, 2021
SRP: $3.99 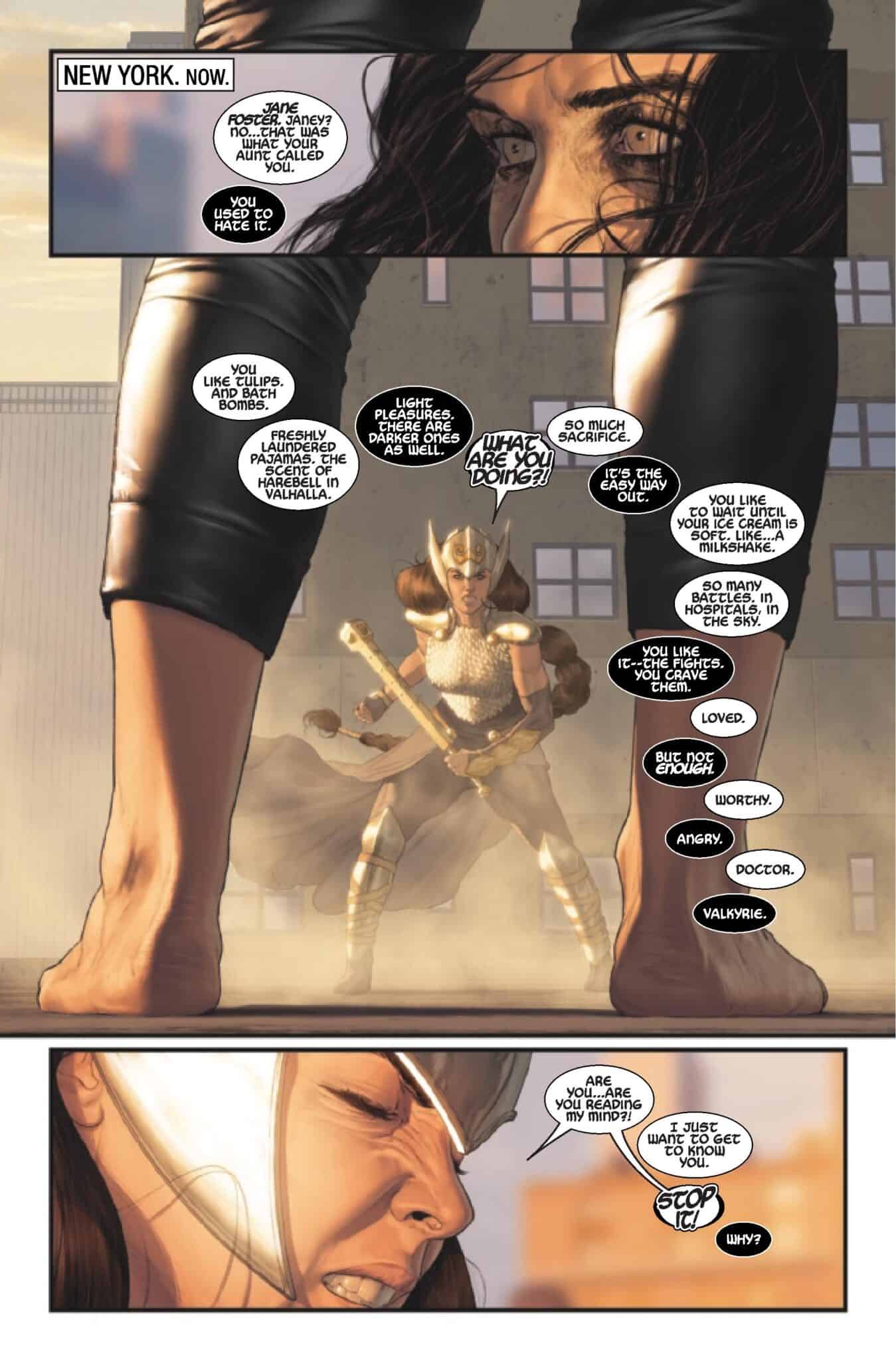 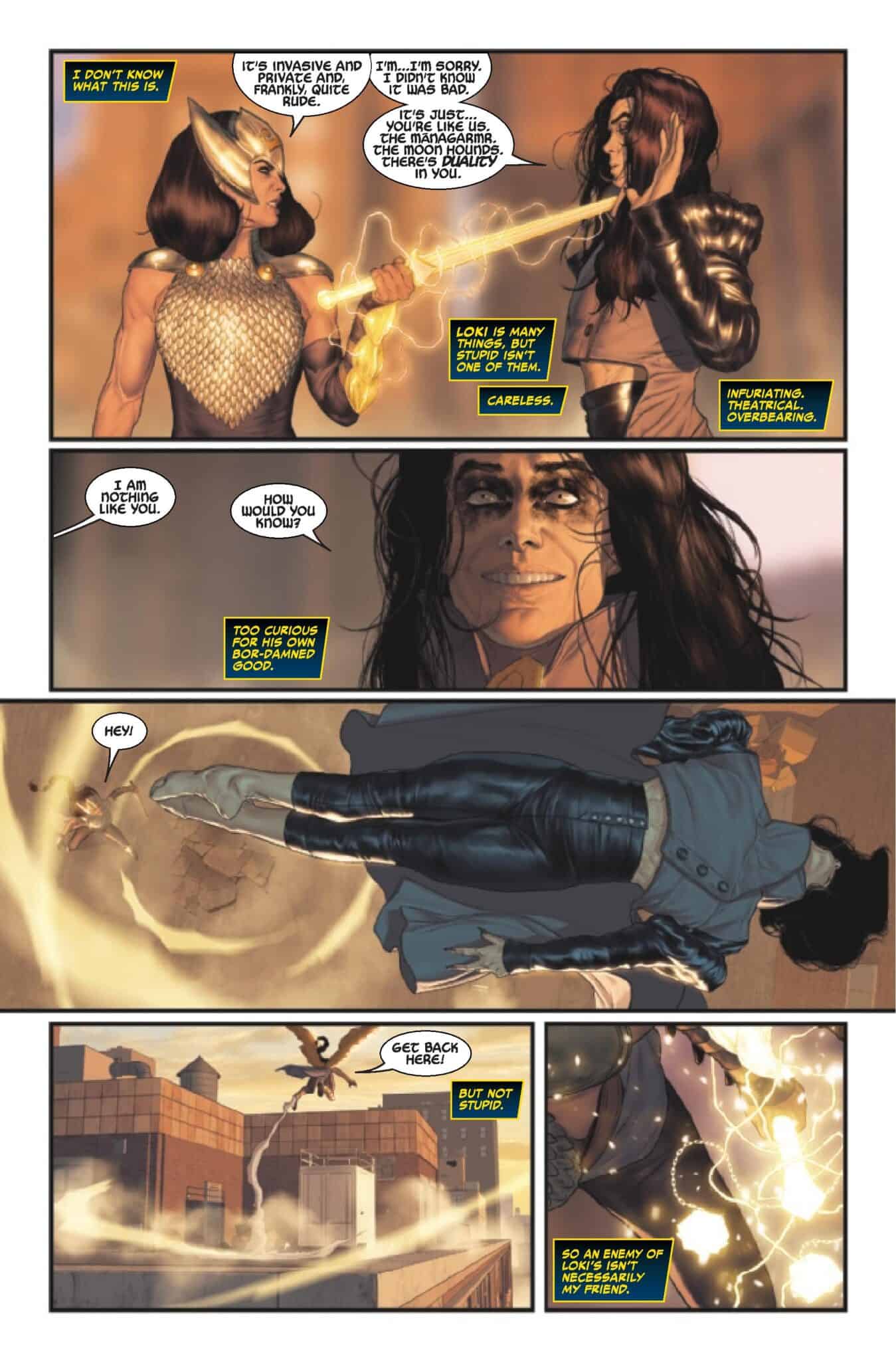 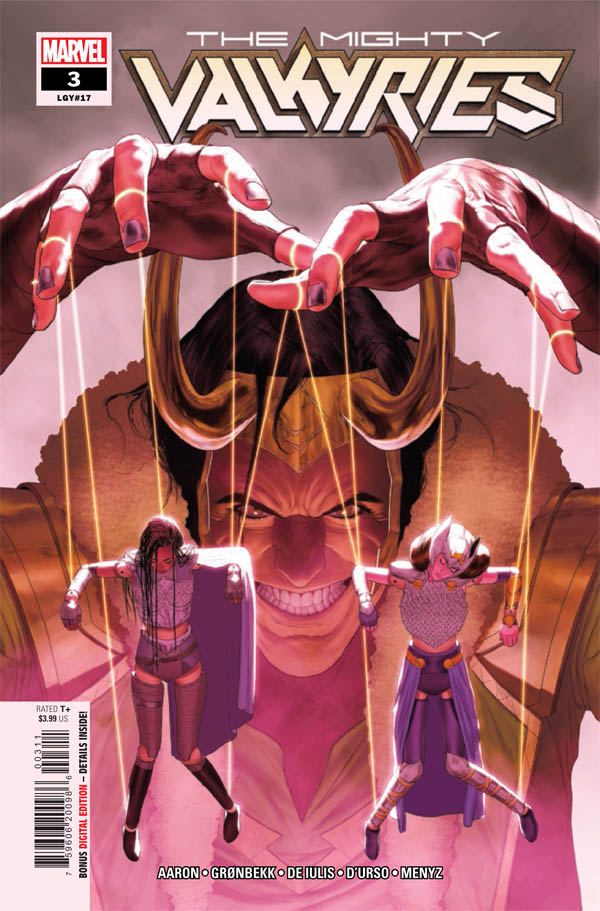 Written by Torunn Grønbekk, Jason Aaron
Art by Mattia de Iulis, Erica D’Urso
Colored by Marcio Menyz
Cover by Mattia De Iulis, Rian Gonzales, Phil Jimenez
Lettered by VC’s Joe Sabino
CHILDREN OF THE AFTERLIFE!
While Kraven the Hunter stalks Jane Foster on Midgard and the newest Valkyrie fights for her soul on Perdita, Karnilla, the queen of Hel, works a miracle in the land of the dead! But Karnilla isn’t Hel’s only ruler-and now she’s upset the cosmic balance. There will be a price to pay…and Karnilla intends to ensure the Valkyries pay it.
32 PGS./Rated T+
In Shops: Jun 16, 2021
SRP: $3.99 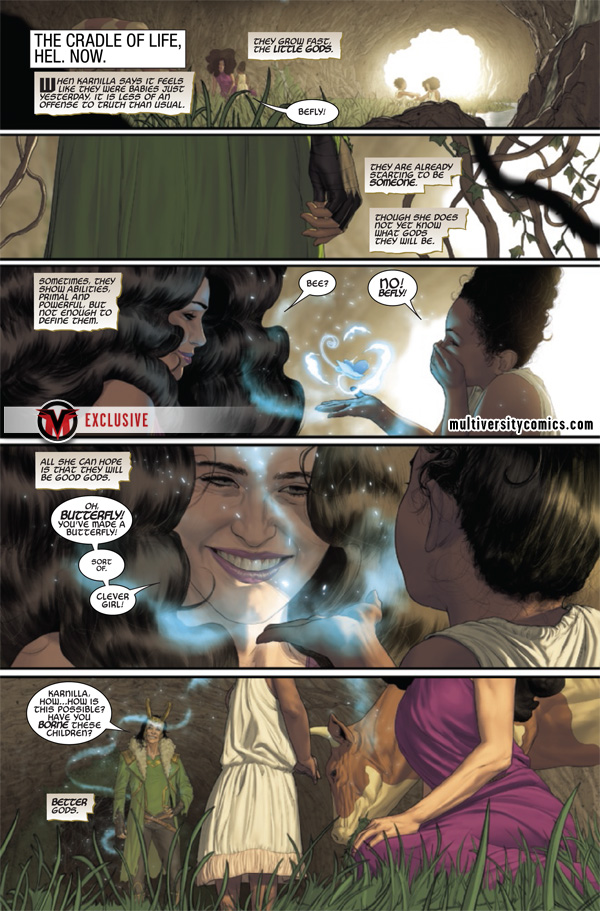 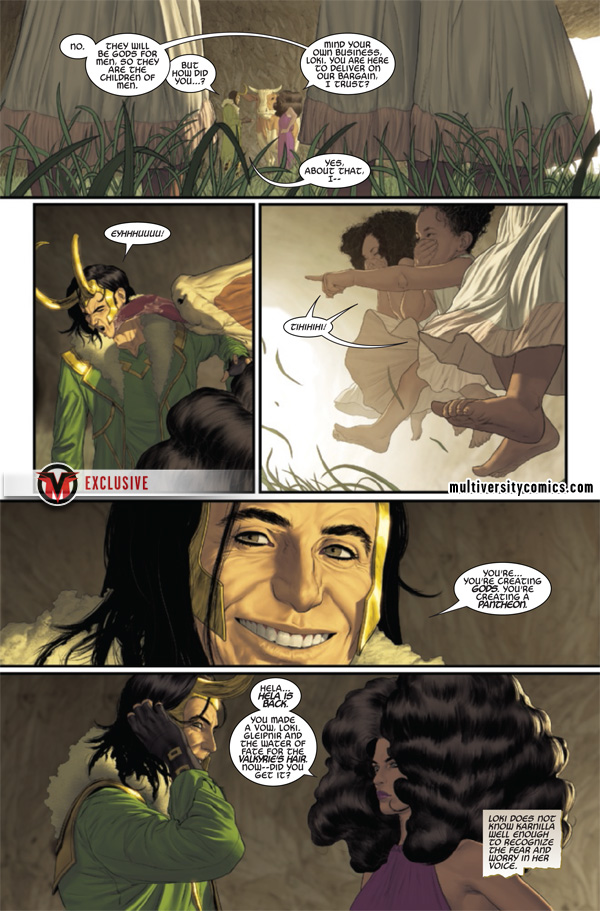