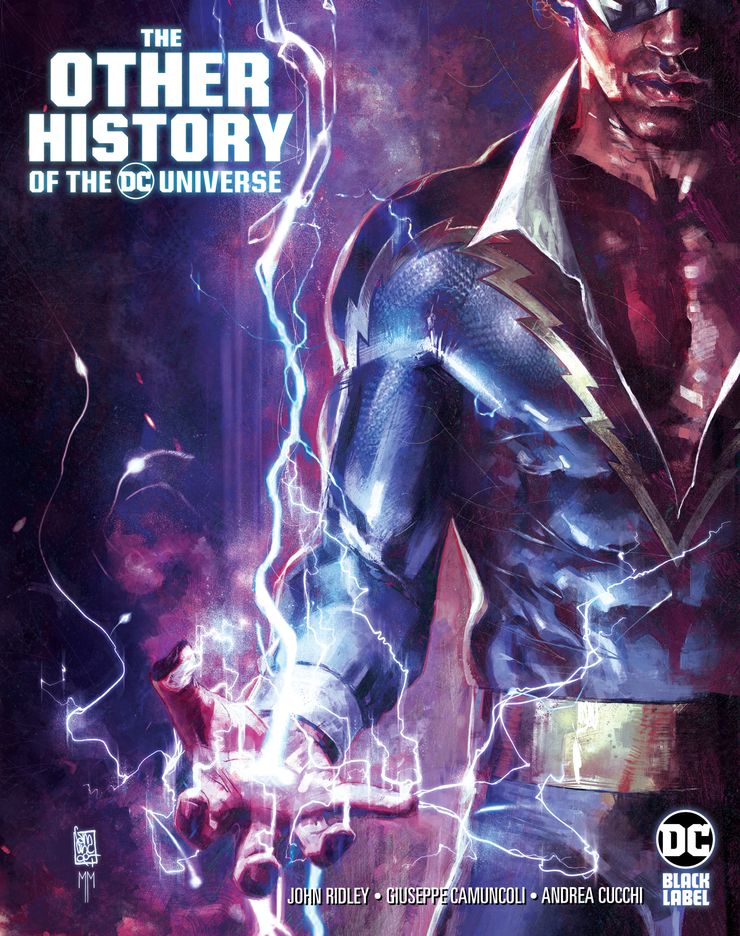 (BURBANK, CA) – August 12, 2020 – This November, fans who have been awaiting award-winning screenwriter John Ridley’s (12 Years a Slave, Guerrilla, American Crime) The Other History of the DC Universe haven’t much longer to wait, as DC announced today that the five-issue miniseries will debut on Tuesday, November 24. Joining Ridley on this series are artists Giuseppe « Cammo » Camuncoli, Andrea Cucchi, and colorist José Villarrubia, with covers by Camuncoli (with Marco Mastrazzo) and Jamal Campbell (Far Sector, Naomi).

Ridley is no stranger to comic book storytelling at DC, having written The Authority: Human on the Inside (with artist Ben Oliver) in 2004 in addition to an issue of the 2005 The Razor’s Edge: Warblade series. Ridley also collaborated with artist Georges Jeanty on the limited series The American Way (2006) and its sequel, The American Way: Those Above and Those Below (2017). On September 29, the Batman: The Joker War Zone anthology will feature a short story by Ridley, with art by Olivier Coipel.

« Following the American Way sequel, I was eager to tell a different story in the DC Universe, one that spotlights heroes who operate outside the prevailing culture, » said Ridley. « Considering the events of the last few months, I don’t think there has been a more urgent need to see the world through a variety of lenses and perspectives. I am deeply appreciative of DC, Cammo, and Andrea, and to all the artisans who have literally put years of work into these stories. I am so enthusiastic for the opportunity to share this series with both the longtime fans of the DCU and a new generation of readers who I hope will feel invited and encouraged to join in. »

« The opportunity to have John, Cammo, and Andrea tell this story couldn’t have come at a better time, » said Mark Doyle, DC Black Label executive editor. « Comic books have a proud history of being a reflection of the world around them, and it only makes sense that includes the viewpoints and perspectives that show the diversity of the superhero experience. I think fans will be very pleased come November. »

The Other History of the DC Universe debuts at open and operating comic book stores and participating digital retailers on Tuesday, November 24. New issues will ship bimonthly, and the series will carry DC’s Black Label content descriptor, with content appropriate for readers ages 17+. For more information on this series and the World’s Greatest Super Heroes, visit the website at www.dccomics.com, or follow on social media @DCComics and @thedcnation. 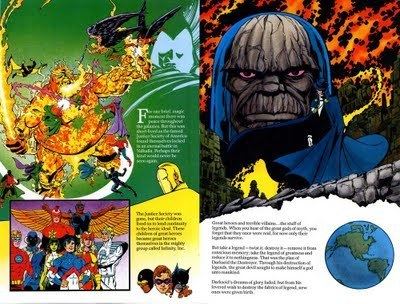 « It’s definitely prose. It’s different from sequential dialogue - It’s not spot art, it’s not sequential art. Giuseppe Camuncoli did a masterful job creating true flow for the book, from one moment to the next over time. »

" Each decade will be from the point of view of a different character from an often-marginalized group, from Black Lightning to Mal and Karen Duncan, Renee Montoya, Katana, and Thunder.

« In terms of the writing, I approached it as though it were an oral history; as though I had the opportunity to sit down with these characters and really ask them about their lives, their relationships, their successes, their failures. It really was trying to treat these characters as though they were very real people. »

Before the New Teen Titans, there were the original Teen Titans. In the tumultuous 1970s, in an America that was very different than today but in many ways all too familiar, the trials and tribulations of these young heroes were witnessed by two of DC’s first Black superheroes: Karen Beecher-Duncan, better known as Bumblebee, and Mal Duncan-even if their versions of events are often at odds. And across that decade, they fought for their seats at the Titans’ table while joining the battle against injustice.

The long-awaited miniseries written by Academy Award-winning screenwriter John Ridley (12 Years a Slave, Let It Fall) and beautifully illustrated by Giussepi Camuncoli and Andrea Cucchi continues to look at the mythology of the DC Universe as seen through the prism of DC Super Heroes who come from traditionally disenfranchised groups. 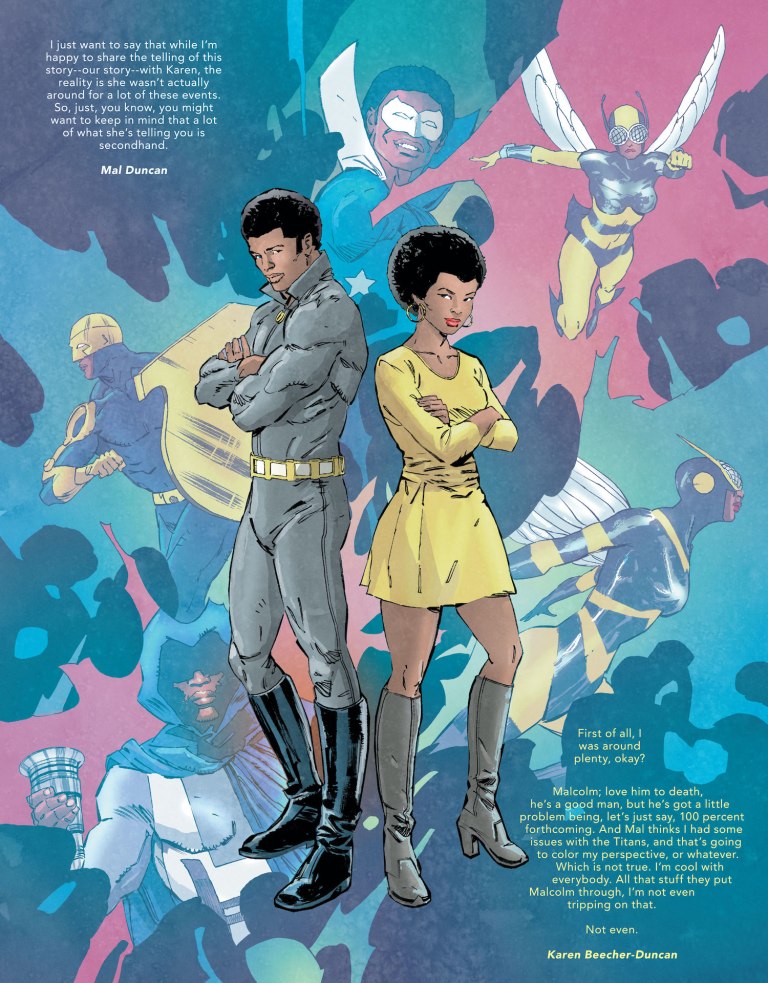 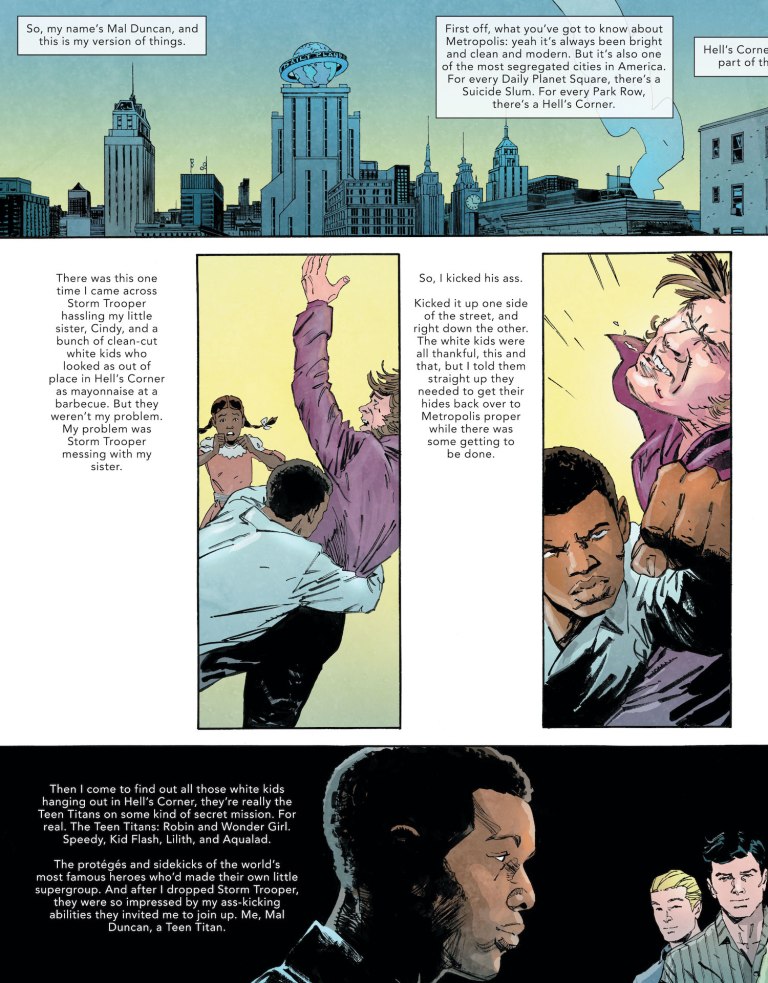 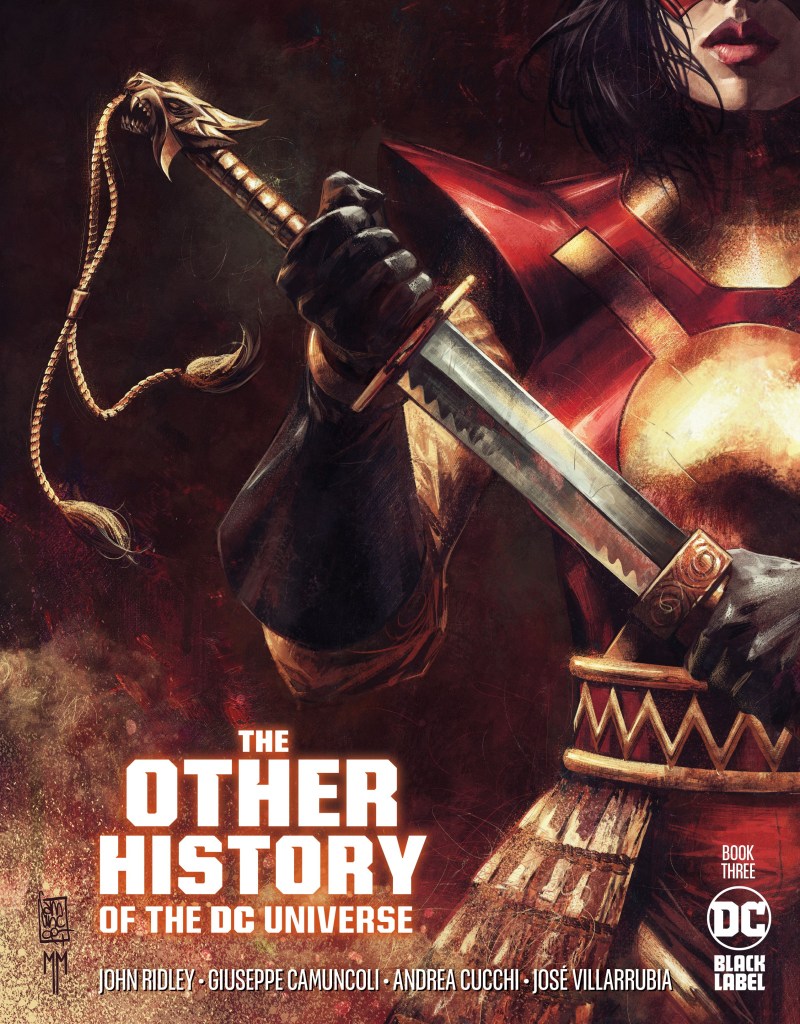 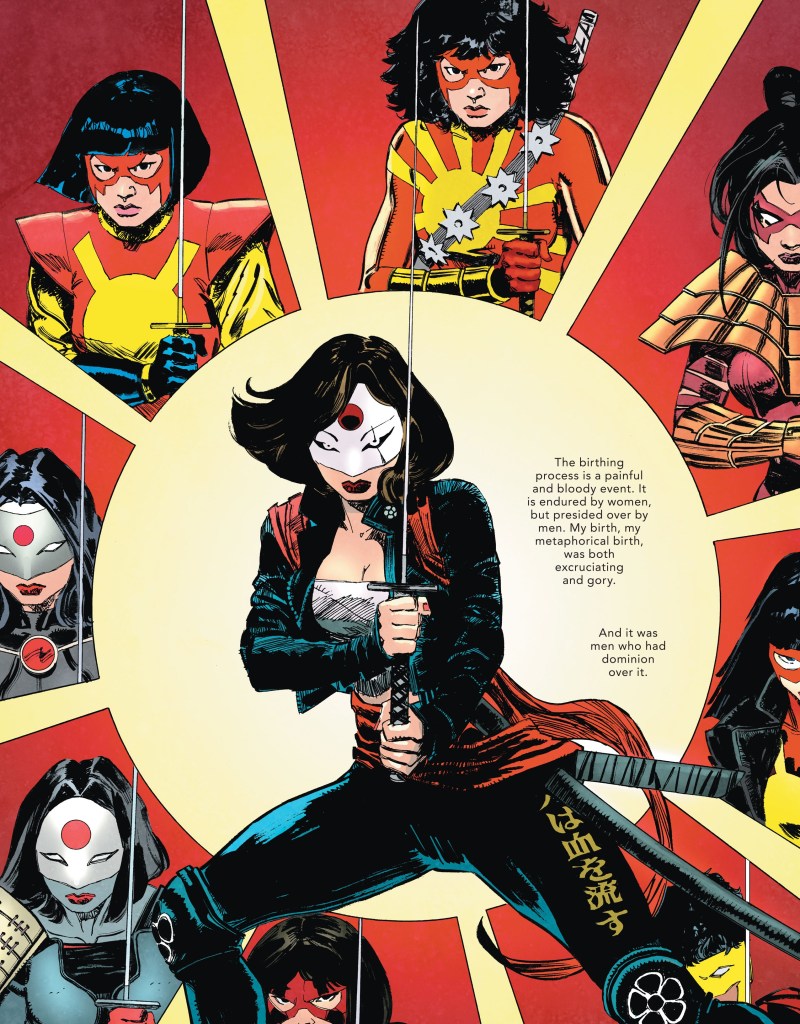 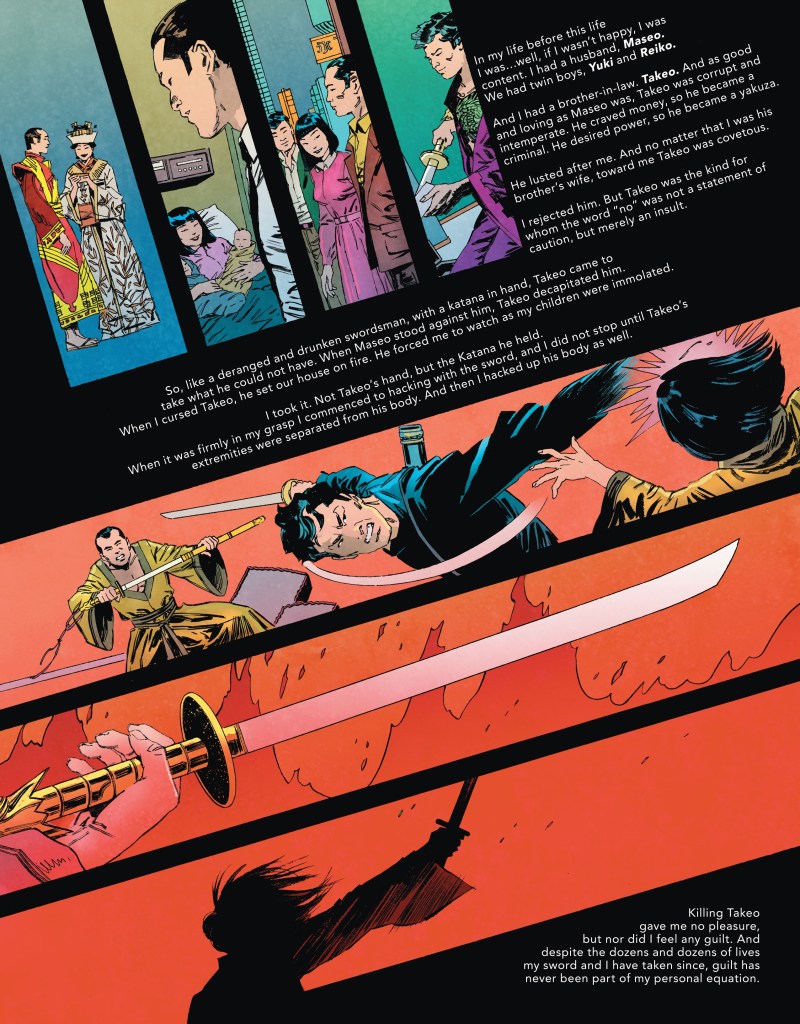 Words can be tricky. Renee Montoya has known this for most of her life. Words taught her to feel ashamed of her gender, her sexuality, and her ethnicity. The people of Gotham City taught her to hide who she was to fit in to, be loved, and in doing so, they taught her to hate herself. But from that despair came something unexpected and powerful.
Renee’s path from a closeted police officer in the 1990s to her time as the faceless vigilante known as the Question is one that is inextricably linked with queerness. It is one that is defiant of binaries, outmoded and hateful stereotypes, and the words that propagate them. As the Question, Renee stood in contrast to society’s rigid expectations of her, held a mirror up to the world’s face, and asked, “Who are you?”

The long-awaited miniseries written by Academy Award-winning screenwriter John Ridley (12 Years a Slave, Let It Fall) and beautifully illustrated by Giuseppe Camuncoli and Andrea Cucchi continues to explore the mythology of the DC Universe, as seen through the prism of DC Super Heroes from historically disenfranchised groups. 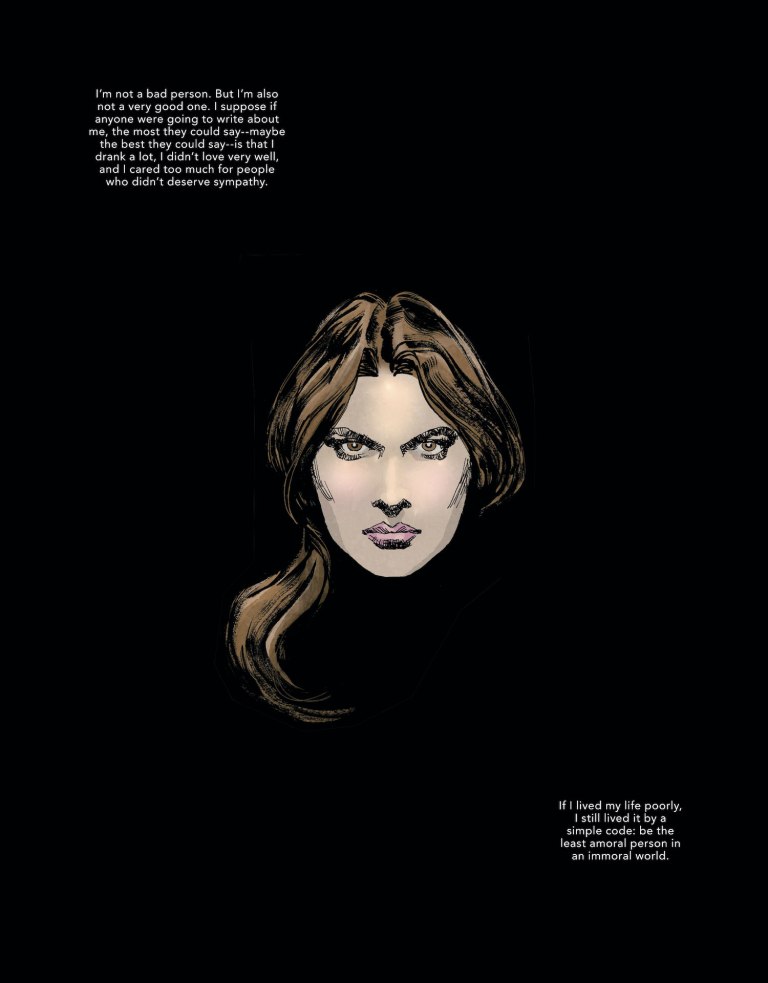 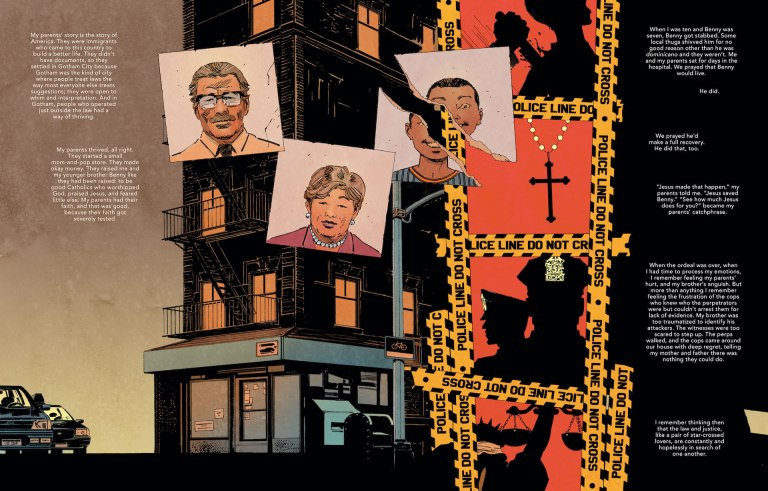