Dynamite is proud to announce that legendary writer/artist Howard Chaykin will write his first new tale of The Shadow in nearly thirty years. The Shadow: Midnight in Moscow will take place three decades prior to the events of his critically acclaimed Blood & Judgment series. Chaykin will reprise his creative role both as writer and artist for this new venture.

“I’m delighted and grateful to Dynamite for the opportunity to work once again on so legendary a character as The Shadow,” says Chaykin. “My new miniseries, The Shadow: Midnight in Moscow, tells the secret story behind the Shadow’s disappearance in 1949.” While this new series marks his return to Shadow storytelling, he hasn’t strayed far from the character in recent years, contributing gorgeous cover artwork for Dynamite’s variety of Shadow series.

“The Shadow: Blood & Judgment is one of my favorite comic series of all time,” says Nick Barrucci, CEO and Publisher of Dynamite. “It absolutely blows my mind, still to this day. I can’t even begin to express how much this means to me as the publisher of the series and how much as a fan of Howard’s series. Howard Chaykin’s return to the character is going to be phenomenal. And in a move that will certainly keep his fans on their toes, he’s setting Midnight in Moscow up not as a direct sequel to his earlier work, but years and years beforehand, at an exciting and critical moment in the Shadow’s history. I have such tremendous respect for Howard as a storyteller, a true modern master of the comic book medium.”

Howard Chaykin is a modern legend in the comics industry, with an exceptionally respected body of work spanning four decades. He is perhaps best known for American Flagg!, a series published by First Comics in 1982. Chaykin wrote and illustrated the first twelve issues exclusively, and was praised by critics and readers alike. In 1985, Chaykin wrote and drew The Shadow for DC Comics, the acclaimed run that would later be collected by Dynamite as The Shadow: Blood & Judgment. He is the recipient of Inkpot and Eisner Awards. His extensive library of comics work includes such titles as Star Wars, Black Kiss, American Century, Challengers of the Unknown, Blackhawk, Hawkgirl, Blade, Punisher War Journal, and Satellite Sam. He was also executive script consultant for The Flash television series on CBS, and later worked on action-adventure programs such as Viper, Earth: Final Conflict, and Mutant X.

The Shadow began its existence in 1930 as a narrative voice on the Street and Smith radio program Detective Story Hour. The audience thrilled to the serialized adventures of this mysterious figure, whose mythos expanded to include Occidental mysticism, hypnotic powers over weak criminal minds, and twin .45 caliber handguns. With a keen intellect and relentless drive, The Shadow hunted criminals without mercy in an era when gumshoe detectives and bootlegging mobsters was a thrilling yet fearsome reality. The character’s popularity has endured for over 80 years, bolstered by appearances in radio serials, novels, comic books, films, and more. In recent years, Dynamite published a groundbreaking and well-received Shadow series launched by comic writer Garth Ennis (Preacher), with further tales crafted by Victor Gischler and Chris Roberson. Lamont Cranston’s grim alter-ego has also appeared in such related series as The Shadow: Year One, Masks, and The Shadow / Green Hornet: Dark Nights.[/quote]

[quote]THE SHADOW: MIDNIGHT IN MOSCOW #1
Written by: Howard Chaykin.
Art by: Howard Chaykin.
Cover by: Howard Chaykin.
Description: New Year’s, 1950–the end of a tumultuous decade…and Lamont Cranston, the man the world and the underworld know all too well as The Shadow, has had enough. It’s time for the Mysterious Nemesis of Crime to hang up his cloak, his slouch hat, and his twin .45s, and retire from public life…
…But despite this momentous decision, Margo Laine and the rest of the Shadow’s agents fear that mankind, teetering on the brink of nuclear Armageddon, may not be quite ready to be bereft of the Dark Avenger.
Pages: 32.
Price: $3.99.
In stores: May 21. [/quote]

[quote=“Howard Chaykin”]Sorry to disappoint the enthusiasts, but I’m not a fan of the original material. When I was called upon to do the book in 1985, I gather the assumption was that here’s this guy who loves the 1930s–so he must be hip to the canon. Not true. I had to do a lot of catch up and research on the source stuff–and it was pretty much what I expected. a lot of junk, and a few gems.

I say this knowing it’s going to piss off the fans of the stuff–you know who you are. Get over it.[/quote]

[quote]THE SHADOW: MIDNIGHT IN MOSCOW #2
STORY BY Howard Chaykin
ART BY Howard Chaykin
COLORS BY Jesus Aburtov
LETTERS BY Ken Bruzenak
COVER BY Howard Chaykin
PUBLISHER Dynamite Entertainment
COVER PRICE: $3.99
RELEASE DATE Wed, July 2nd, 2014
The streets of New York run red with criminal blood, as the families of organized crime wage war on each other. The streets of London conceal an international conspiracy that may very well put an end to humanity. And Lamont Cranston, aka The Shadow, has retired. WTF!?!![/quote]

[quote]The Shadow: Midnight in Moscow #3
Story by Howard Chaykin
Art by Howard Chaykin
Colors by Jesus Aburtov
Letters by Ken Bruzenak
Cover by Howard Chaykin
Publisher Dynamite Entertainment
Cover Price: $3.99
Release Date Wed, August 6th, 2014
“The Game’s afoot!” Sherlock Holmes famously said–and a half century after the legendary sleuth pursued criminals in the foggy streets of London, The Shadow finds himself in the footsteps of Holmes, drawn into the hunt for a conspiracy that will, if it succeeds, will bring the free world to its knees.[/quote]

[quote]Shadow: Midnight in Moscow #5
Story by Howard Chaykin
Art by Howard Chaykin
Colors by Jesus Aburtov
Letters by Ken Bruzenak
Cover by Howard Chaykin
Publisher Dynamite Entertainment
Cover Price: $3.99
Release Date Wed, October 29th, 2014
The Doomsday Clock ticks ever closer to Midnight–and only the SHADOW and his faithful companion MARGO LAINE can hope to hold back the hour of annihilation…[/quote]

[quote]Shadow: Midnight in Moscow #6
Story by Howard Chaykin
Art by Howard Chaykin
Cover by Howard Chaykin
Publisher Dynamite Entertainment
Cover Price: $3.99
Release Date Wed, December 3rd, 2014
The doomsday clock tolls for mankind–and only one man can save both nuclear powers from Armageddon in the breathless final chapter of what may be the SHADOW’S final adventure.[/quote] 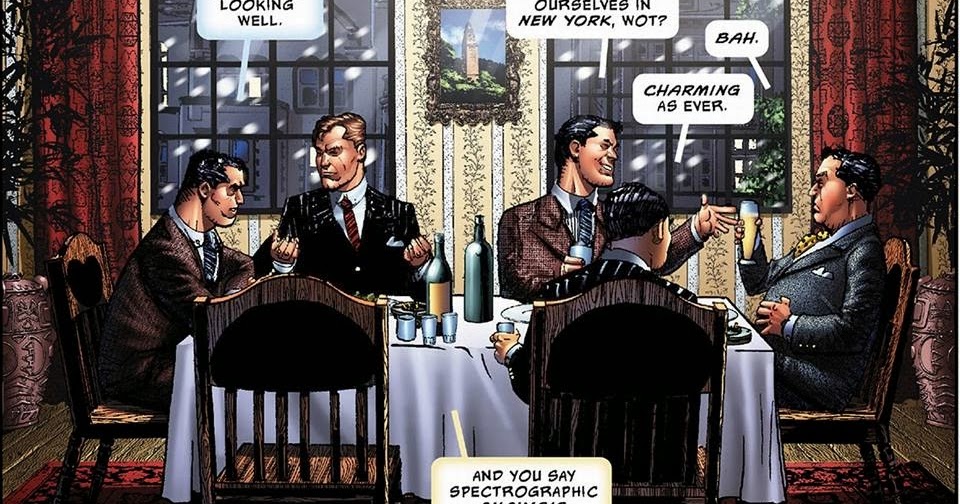 The Shadow: Midnight in Moscow

In the first issue of Howard Chaykin's miniseries The Shadow: Midnight in Moscow , published by Dynamite and set in the early '50s, the Sh... 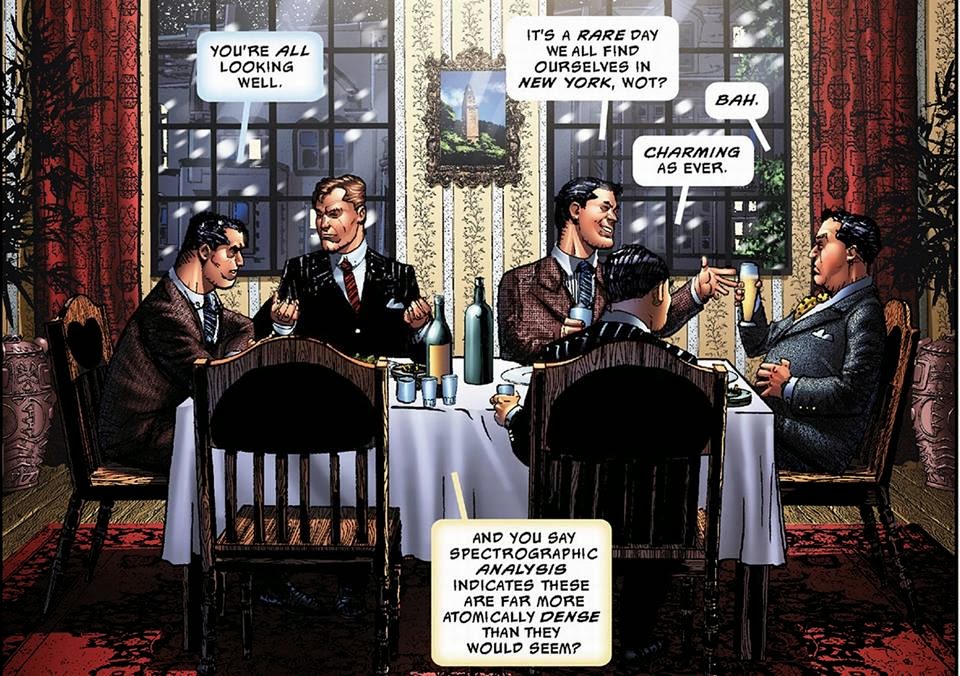 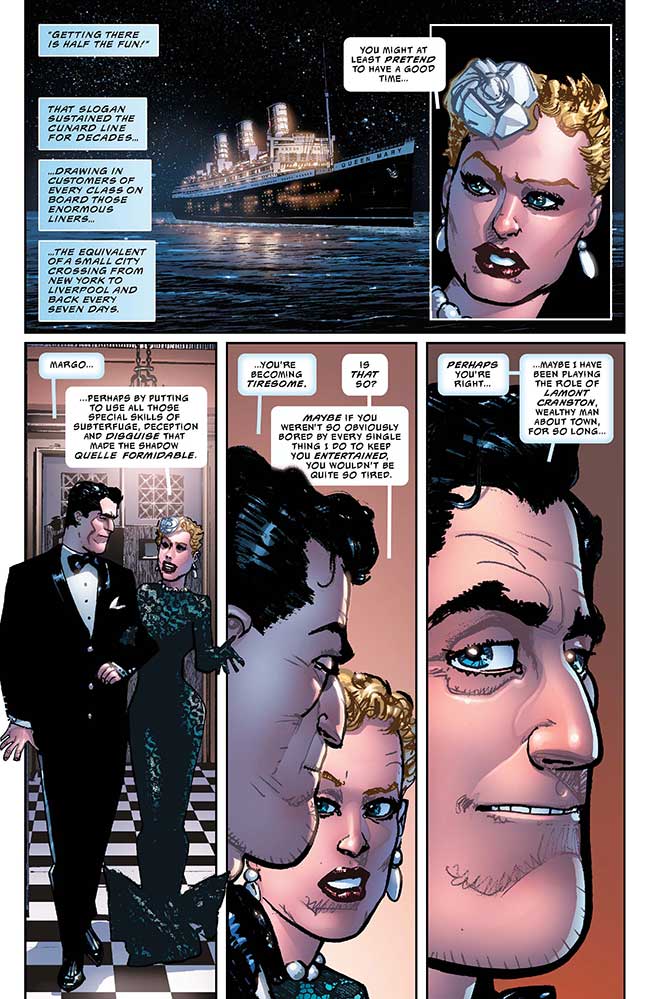