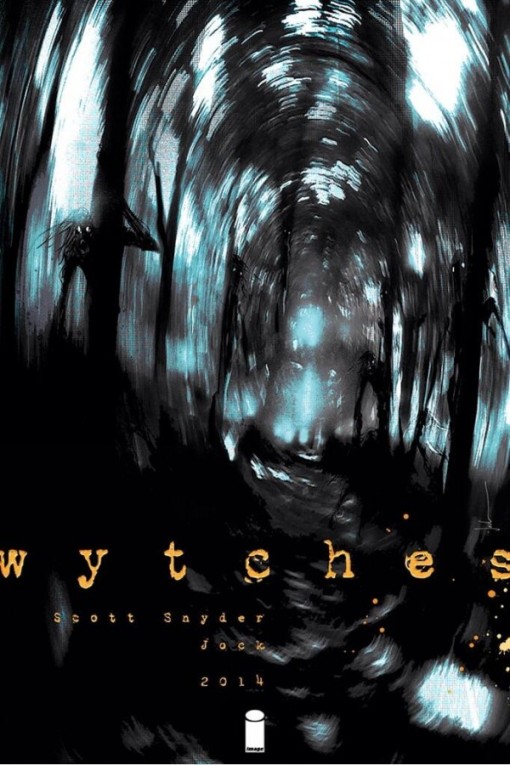 Scott Snyder (Batman, Superman Unchained, SEVERED) and Jock (Batman, Wolverine, SNAPSHOT) will team up for a new, ongoing horror series called WYTCHES. Everything you thought you knew about witches is wrong. They are much darker, and they are much more horrifying.

WYTCHES takes the mythology of witches to a far creepier, bone-chilling place than readers have dared venture before. “I like taking classic monsters and reimagining them in a fresh, contemporary, and much scarier way,” said Snyder.

Snyder and Jock have worked together previously on the Batman story “The Black Mirror” in the pages of Detective Comics and Snyder knew from the get-go that he wanted Jock on board.

“It’s great to finally have Scott Snyder back at Image,” said Image Comics Publisher Eric Stephenson. “We loved working with Scott on SEVERED, and he has only gotten better since then, so it’s really wonderful that he’s teaming up with Jock on what is without a doubt one of the creepiest books we have ever published.”

WYTCHES is a new ongoing fantasy horror series coming to Image Comics in 2014. You’ve been warned.[/quote]

For me, the idea came about a little over a year ago, when a friend of mine had visited Salem and was talking to me about how spooky it was. She was talking about the persecutions of people being accused of being witches, and I was fascinated, but at the same time, what they did as witches didn’t sound very scary. Like, the accusations and what happened to them are terrifying, that people could be that cruel to other people, but the idea of them being witches, I thought to myself, “What if witches were scarier? What if witches themselves were something to really be horrified by?” Then I got this idea where I started thinking, “Well, what if all the people that we assume are witches throughout history or we’ve accused of being witches are actually just the human worshippers of witches, and witches themselves are actually much more frightening?” And not supernatural, but actually a sort of different offshoot in a way that – I don’t want to give too much away, but there’s something much more ancient and something much more human that lives deep in the woods and is very elusive and very hard to find; very scary and very big, cannibalistic, and very primally frightening.

[quote]Wytches #1
Story by Scott Snyder
Art by Jock
Cover by Jock
Publisher Image Comics
Cover Price: $2.99
Scott Snyder (Batman, Superman Unchained, SEVERED) and Jock (Batman, Wolverine, SNAPSHOT) will team up for a new, ongoing horror series called WYTCHES. Everything you thought you knew about witches is wrong. They are much darker, and they are much more horrifying.
WYTCHES takes the mythology of witches to a far creepier, bone-chilling place than readers have dared venture before. “I like taking classic monsters and reimagining them in a fresh, contemporary, and much scarier way,” said Snyder.[/quote]

They’re out there in the woods, waiting for you to come to them, to give them what they want for what you want. That, for me, is what becomes deeply scary, because it makes the people in the book as scary as the monsters. That decision is horrifying, and it holds a mirror up to the reader and says, “What would you do if you were in this situation?” In that way, I hope the book is scary – not just being traditionally scary with monsters that are terrifying, but emotionally scary the way my favorite [author], Stephen King, is, and George Romero. My favorite horror storytellers do stories where the monsters are terrifying, but what’s ultimately scary is the ugliness of human nature, and the things we do when we’re under pressure. That’s what the book is about. It’s the scariest book I’ve ever done. I’m really, really proud of it!

Part of the impetus comes from some of the ups and downs of parenting – the sense of joy and wonder, but also the total terror and guild that comes with being a parent, the terror that this thing that’s sort of a vital organ in your body has left your body and is out there in the world. That’s the way it feels. Something is out there, and if anything happened to it, you would die. You worry about that thing all the time. So that sense of exhausting concern and love is part of what the book is about. These ancient, timeless thing, the wytches, wait for you to come to them with things you need to stave off sickness, death, to help somebody that’s sick, to get something for the one you love – whatever you need. You come and you give them someone else, and they’ll give you what you want. So in that sense, asking what you’d do to save your kid, what would you do to save your wife or your husband, or to get what you want if you’re selfish? They’re always out there to make a trade.

[quote]Yeah, well I said, “Imagine your child is sick. Imagine your child has a terminal illness. Now imagine that the guy next-door is someone who beats his animals, beats his wife, is a drunk, a terrible person. Would it be so bad to pledge that person so that your kid lives and has a chance at life?” And he said, “You’re evil”. [Laughter] But from there you can kind of creep towards more and more selfish behavior. You can creep into really scary, evil things that people could do to each other, too, you know? Competitive things and such.

I knew that I had a book I couldn’t wait to do but I understood right away that the monsters weren’t just scary monsters, but a total alien reflection of the human characters in the book. When you see them, physically, in Issue #2, when you see their faces, and the way that they look…they are designed physiologically in a profile that really fits the way they hunt. They are very distinctive in the way they look. They are very spooky, but at the same time, they also need to look very alien. Their eyes are very black. They are very expressionless, and there’s that sense of them being other. That sense of them being unknowable. They are not scary, snarling, evil, growling things, but things that just stare and wait from the woods and wait for you to come to them.[/quote]

A busload of children disappears in the woods. A strange bite grows on a girl’s neck. And the wytches are getting closer, creeping from the woods. Be there for the terrifying second chapter of the new smash hit, WYTCHES.[/quote]

[quote]Wytches #3
Story by Scott Snyder
Art by Jock
Cover by Jock
Publisher Image Comics
Cover Price: $2.99
Release Date Wed, December 17th, 2014
A parent’s worst nightmare: a beloved child lost in the woods. Behind the trees lurk horrors, and the brush conceals atrocity. No matter how desperate the search, understand that your prayers will fall on deaf ears. There is no escape from the Wytches.[/quote]

Everybody is really at a very paranoid place. Sailor is completely convinced that these things are real, and the things she’s felt out there pursuing her for a very long time are really out there. She’s afraid to tell her parents because of things that have happened in the past, which will come out soon. Charlie is just absolutely determined to prove that the family is under attack by somebody out there because he feels so guilty about missing the opportunity to protect Sailor from Annie, and to protect the family from real threats. Lucy is just trying to hold it all together. She’s listening to what Sailor is afraid of and honoring that, while keeping in mind that these fears have to be some kind of fantasy. They are broken apart in certain ways, and they’re desperately trying to stay together. Lucy and Charlie are both focused on finding Sailor, but they’re coming at it from very different angles that speak to some of the secrets of what’s passed between them, which will become clear very soon.

[quote]Wytches #4
Publisher: IMAGE COMICS
(W) Scott Snyder (A/CA) Jock
Now, with the true nature of the wytches revealed, Charlie descends into the Earth in a desperate race to save his daughter and his family from an inconceivable fate.
Item Code: NOV140700
In Shops: 2/4/2015
SRP: $2.99[/quote]

That’s interesting. I get a lot of questions about who I would pledge, and I have a lot of letters saying stuff like, “I’m pledging my roommate because, you know what? I can’t stand the way he eats!” But if there was a thing I could get rid of in myself, or the way I think the book is deeply about the things we wish for that we don’t want to admit we wish for – if there was a thing I could stop thinking about would be this tremendous fear of death that runs through everything I do and is clearly there in the book. The thing about being a parent is that you can be as not worried about yourself as you grow older, but once you have a child, you’re vulnerable to the world in ways you never expected. It makes you feel so unprotected and you see things falling away that you didn’t see before. For me, I’ve never experienced the level of joy that I’ve experienced with my kids, it’s like it’s opened a different color palette of emotions. On the other end of that, the darker colors of that are new, too. The fear of losing a kid. The anger of feeling like you have to be selfless because you’d be so much more hurt if anything happened to that kid over you. It makes me feel mortal. That fear that runs through my life since even before I had kids, it’s the lynchpin of my anxiety. The things I get obsessed about are aging, illness, time passing too fast. I wish I could get rid of that and just be more okay with the ephemeral nature of it all. I always worry about what I’m going to lose, who is going to get sick, my kids growing too fast. I have a very hard time relaxing and saying things are good right now and being happy with it. I wish I was better at that for my sake and everyone’s sake.

[quote]Wytches #5
Story by Scott Snyder
Art by Jock
Colors by Matt Hollingsworth
Letters by Clem Robbins
Cover by Jock
Publisher Image Comics
Cover Price: $2.99
Release Date Mar 25th, 2015
In the first half of the opening arc’s two-part finale, Charlie descends into the wytches’ burrow itself to save his daughter from an unspeakable death. But what horrors await him deep beneath the earth? And what secrets…?[/quote]