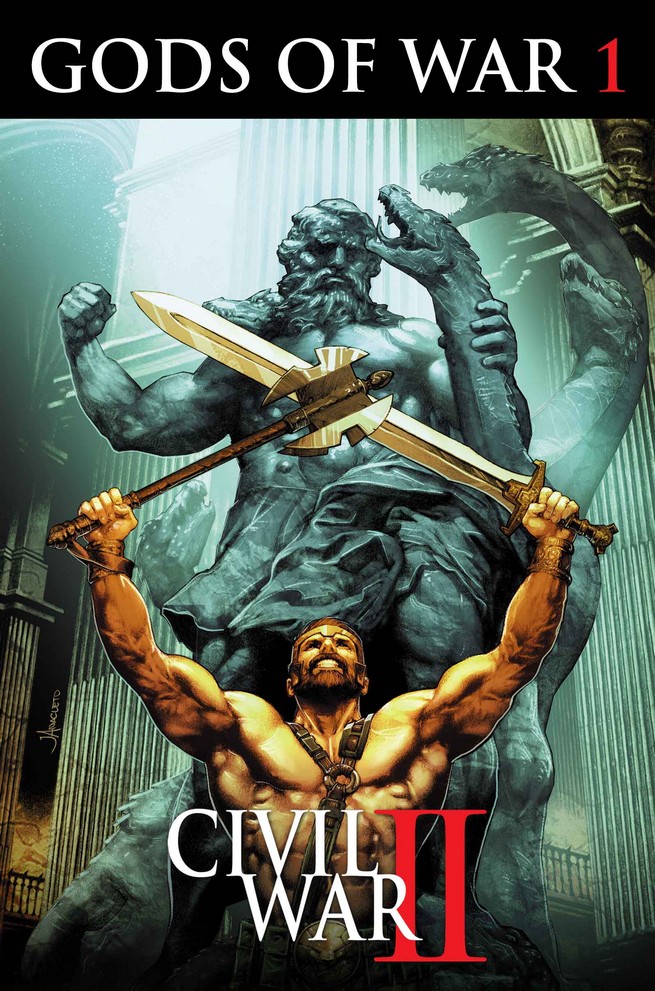 It’s sort of a joke, but in some respects when me and my editor Katie Kubert talked about this it’s almost like it’s an anti-crossover in as much as Hercules, as I’ve set him up in the series so far, is sort of on the outside. He’s the world’s first super hero, but he’s ruined his reputation to such a degree that’s he’s seen as a drunkard and a joker. So his old friends on the Avengers treat him with a bit of caution. They don’t include him in things the way they used to because they know it’s going to end up in a lost weekend or whatever. That’s a reputation he’s trying to repair.

The world is on the brink of chaos, with heroes on all sides of the war… but when only the best are called into action, where will the world’s first super hero land? Join us for an all-new epic Civil War II series that takes Hercules right to the front lines! As a God, is he responsible for a larger roll in the potential destruction of the Marvel Universe? Or does he have the power to alter fate?!
[/quote]

• A new Civil War is ripping through the Marvel Universe, but HERCULES has got problems of his own. There’s a threat that only he knows about, and all the heroes he knows are too busy to lend a hand.

• Time to get out his address book and call in some much older friends…ancient heroes of myth who will come to his aid. Introducing the mighty, mythological GODS OF WAR!
[/quote]

• As a civil war rips through the Marvel Universe, HERCULES battles to stop the Uprising Storm…the one threat no one else is aware of.

• But if the first super hero is going to save the world, he’s going to need help, and not even the Avengers are going to stand in his way.

• With no one else to turn to, Herc must recruit heroes of myth to stand at his side.

Description: The final chapter! With the world locked in Civil War, Hercules and the Gods of War face down a catastrophic threat that the other heroes of the Marvel Universe are blind to. Can they prevail alone against the wrath of a new race of gods? Or has the Civil War provided the Uprising Storm with the perfect opportunity to master the world and change it forever?