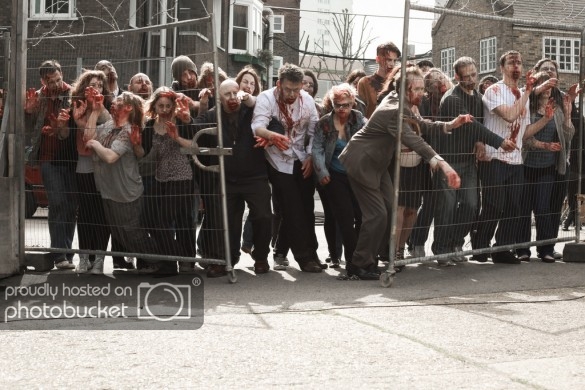 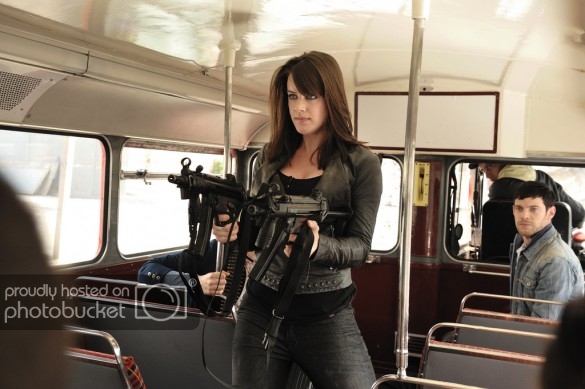 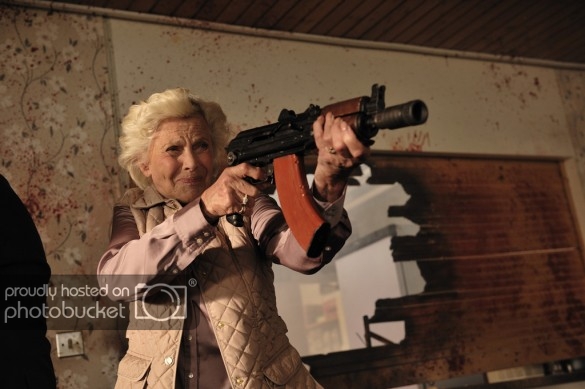 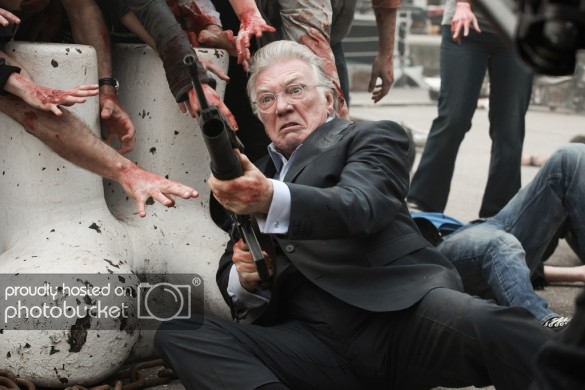 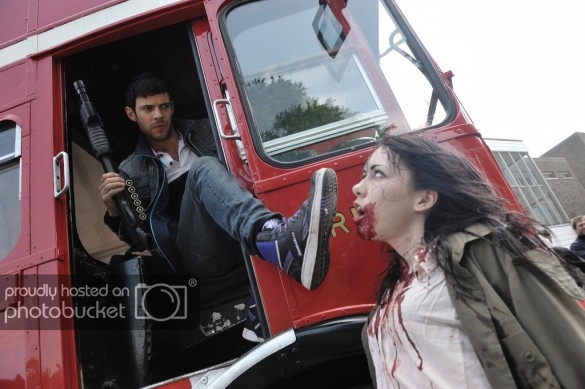 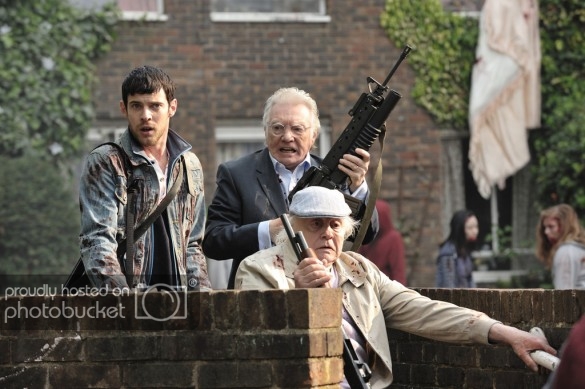 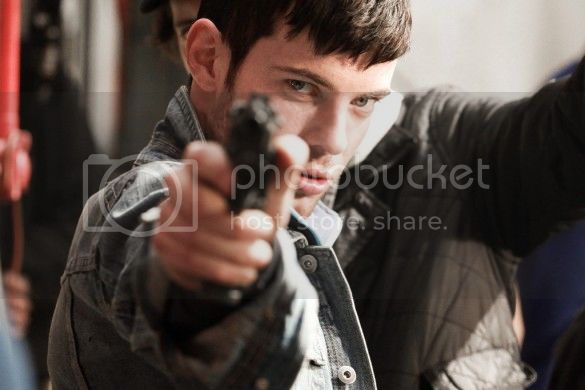 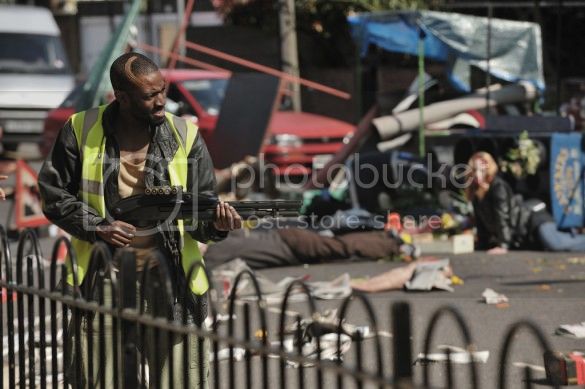 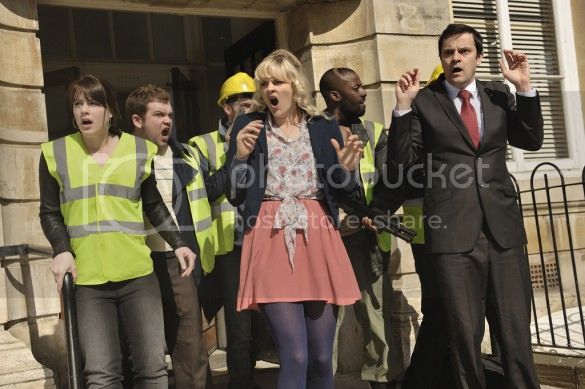 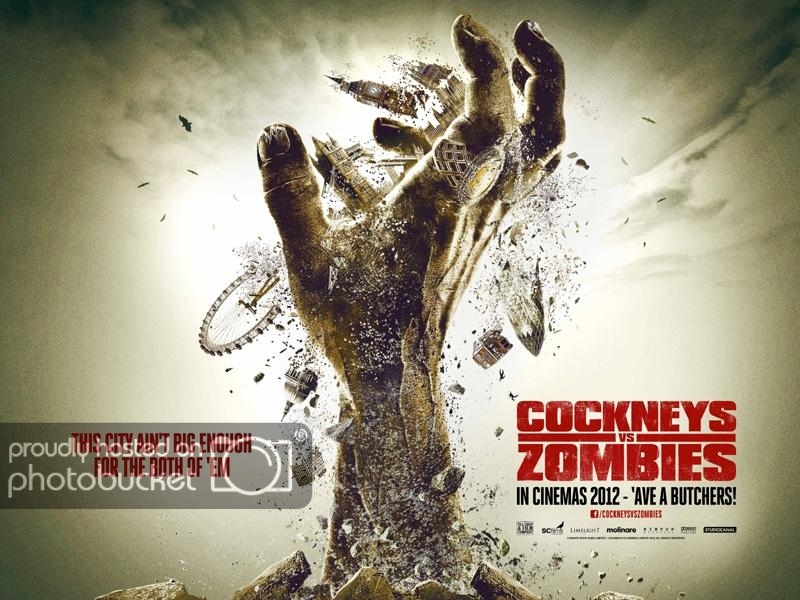 [quote]With Severance and his work on Torchwood and Doctor Who, James Moran was, to me, the name in horror comedy. He’s one of our very few people is really good at it, good at cracking horror and comedy together. The rules of horror and comedy seem to me to be diametrically opposite. Horror is all close up, claustrophobic, dark, visceral, scary; comedy is all about wider shots, brightness, seeing everything. Crafting the two things together, with gory things, character work, is quite a puzzle, but an exciting one.

Comedy needs to work very quickly and what you need to read off an actor’s performance is their body language and their expressions, especially the body language. If somebody jumps back scared on a tight shot, if feels visceral but if you’re on a wide shot, you can laugh about it.

When I came up with the concept and first mentioned “Hey, why don’t we have zombies and cockneys in a movie?” I was working with a couple of cockney actors at the time, and they were coming up against a supernatural enemy. It was hilarious because of the cockney attitude of never giving a shit about anything, never letting down your facade, always having a funny line on your lips and then just blowing the enemy away with a shotgun. This sort of attitude, which has helped cockneys successfully fight everything from Zulus to the old bill, never really has been seen in a film with a supernatural enemy.

Of course, the title Cockneys vs. Zombies is the high concept that sets it all up, but I felt that tonally, this film had a niche that was unique. All through the development process I had to make sure we didn’t lose that cheeky, fun attitude of a bunch of horror protagonists who are not scared. They don’t spend half an hour figuring out it’s zombies, they just go “Oh, it’s zombies, okay.” I wanted to retain that tone of voice.

I didn’t want to make it a comedy as such, I just wanted to observe the situation and see what would happen if you put zombies into the mix. Every funny set piece is just playing with the tropes. We’re not making a “Haha” film, it just happens that the characters are funny and we love going on an adventure with them.
The zombie genre is a genre of its own now, like a thriller or a romantic comedy. I was keen to not just make a zomedy but I wanted a Cockney zombie adventure that I’m going to call my zomventure. It’s much more action packed, much more gung-ho.

I didn’t want it to be in any way patronising, and I wanted it to be my loving homage to cockney culture. The character played by Alan Ford is fighting to retain that culture, and that means looking after your neighbours, making sure your small community is alright, the values of family. That’s kind of the theme of the film – the fight to retain cockney values in a changing East London landscape, as symbolised by zombies.

Zombies are always a symbol, representing the protagonist’s troubles and worries. In this film you can read the zombie outbreak as being a symbol for old traditional values being threatened by an outside enemy.
We played on some of the things you’d want us to play on, like rhyming slang and feisty, foul language, but I think it’s key that everyone in the movie has a lot of heart. You can identify with all of the characters which makes them very likeable even while they’re swearing, shooting zombies, robbing banks.

The truth is, I always had Alan in mind for the role he is playing. He’s so cockney he’ll inspire everyone else to be as cockney as he is. I tried to cast really interesting actors, maybe some unexpected choices – Richard Briers, Rasmus Hardiker, Henry Treadaway. It’s a B-movie title but I wanted the audience to go from that to a lot of fun and excitement and quality.

Sure, the title will polarise audiences, but I think it’s cheeky and that’s how it should be. For us, though, it was the concept, and I feel that if people like that concept then the title should be alright.[/quote]