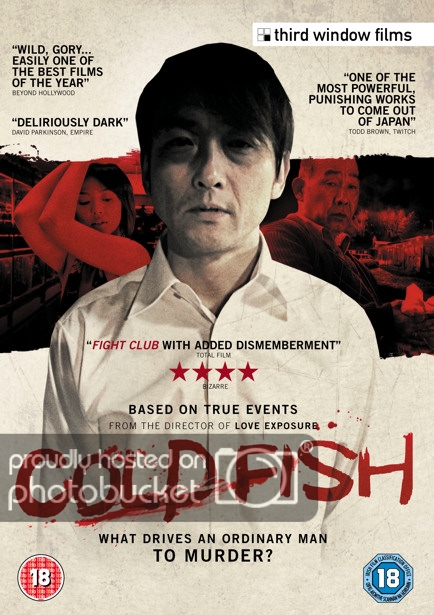 From the director of the critically acclaimed ‘Love Exposure’, comes the newest masterpiece from Sion Sono Shamoto runs a small tropical fish shop. His second wife, Taeko, does not get along with his daughter, Mitsuko, and this worries him. One day Mitsuko is caught shoplifting at a grocery store. There they meet a friendly man named Murata, who helps to settle things between Mitsuko and the store manager. Since Murata also runs a tropical fish shop, Shamoto establishes a bond with him and they become friends; Mitsuko even begins working for Murata and living at his house.

What Shamoto doesn’t know, however, is that Murata hides many dark secrets behind his friendly face. He sells cheap fish to his customers for high prices with his artful lies. If anyone detects his fraud or refuses to go along with his money-making schemes, they’re murdered and their bodies disposed of by Murata and his wife in grisly ways. Shamoto is suddenly taken in by Murata’s tactics, and by the time he realizes that Murata is insane, and a serial killer who has made over fifty people disappear, he is powerless to do anything about it. But now Mitsuko is a hostage at Murata’s home, and Shamoto himself has become the killer’s unwilling accomplice. Cruel murders gradually cripple his mind and finally the ordinary man is driven to the edge of the abyss.