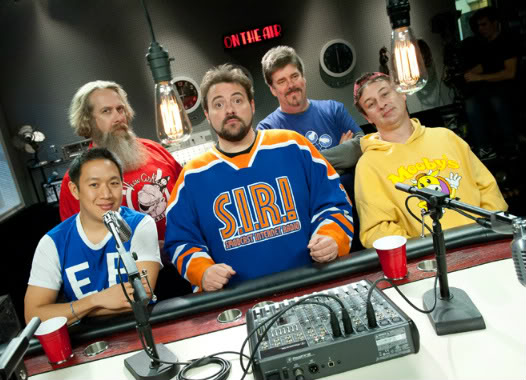 [quote]AMC’s new unscripted one hour series, Comic Book Men, dives deep into fanboy culture by following the antics in and around master fanboy Kevin Smith’s New Jersey comic shop, Jay and Silent Bob’s Secret Stash. The six part series documents the daily banter of the Stash staff and customers as they geek out over mind-blowing pop culture artifacts and the legends behind them. Comic Book Men features Secret Stash employees Walt, manager and de-facto leader; Mike, a comic book virtuoso; Ming, the store’s technical expert and go-to whipping boy; and Bryan, who doesn’t actually work at the Stash, yet can always be found perched on a stool behind the front counter. As the team buys, sells and discovers the treasures of the comic collecting world, they share all the juicy details with Kevin through their outrageous podcast, which is woven throughout the series. The Secret Stash is not only a place for these comic book men to buy and sell, but it’s also a refuge for many to hang out and be part of a community that loves comics.

Complementing the show are a host of online activities and extra video scenes at AMCTV.com, including episode sneak peeks, extra scenes, photo galleries and a talk forum.[/quote]