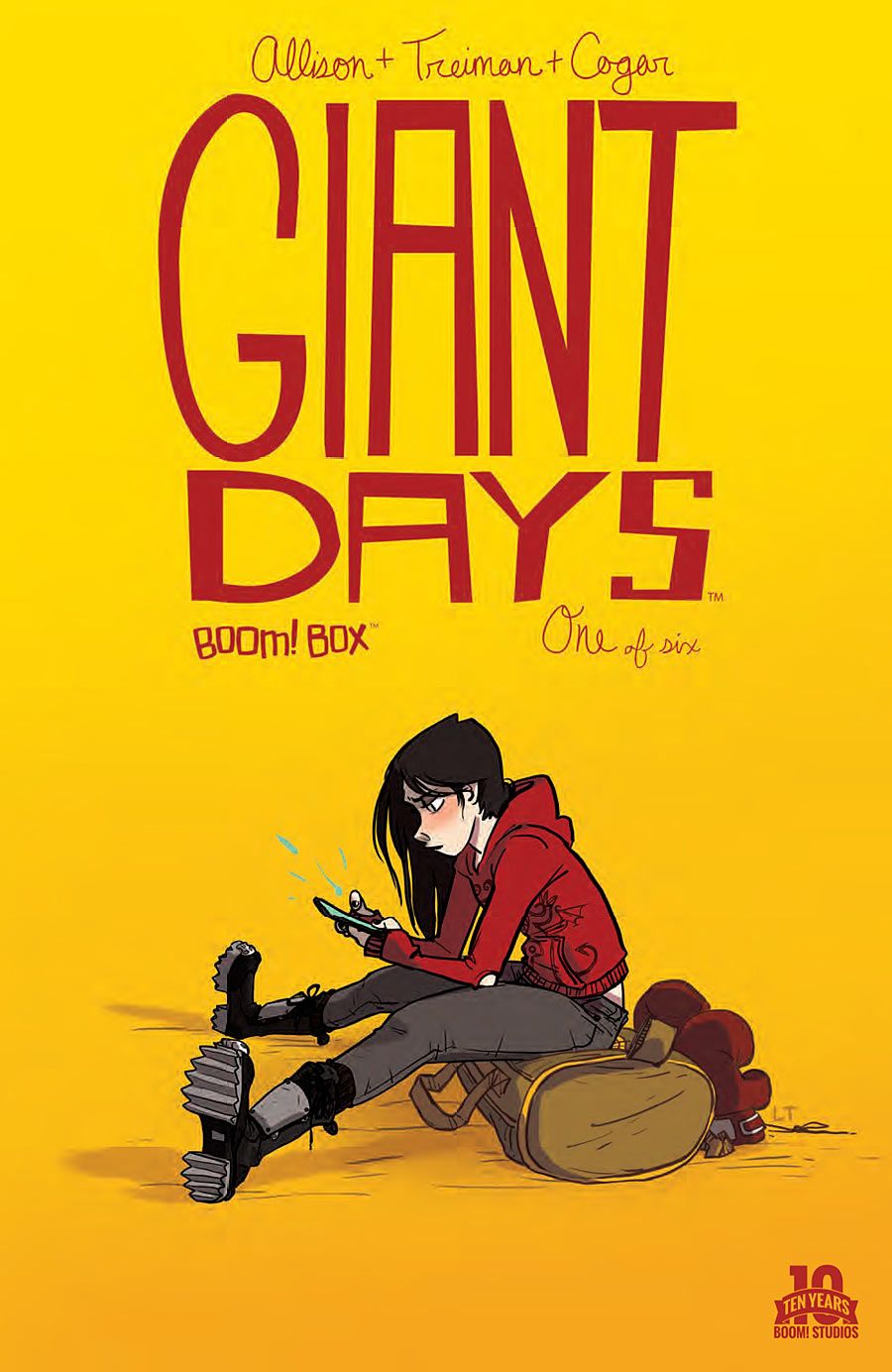 [quote]Giant Days #1
Story by John Allison
Art by Lissa Treiman
Colors by Whitney Cogar
Letters by Jim Campbell
Cover by Lissa Treiman, Shelli Paroline, Braden Lamb
Publisher Boom! Studios
Cover Price: $3.99
Release Date Mar 18th, 2015
WHY WE LOVE IT: John Allison is well known for his funny and intelligent webcomics Bad Machinery and Scary Go Round. His story of three friends at university lightly flavored with the occult features some of the best dialogue in comics, and we couldn’t help but think it’s like Monty Python goes to college. Sign us up!
WHY YOU’LL LOVE IT: John Allison’s daily webcomics are hilarious, the kind of strips where every panel makes you laugh out loud. As a result, John has earned a large, loyal following of readers that have followed his work daily for the past 12 years. This is a series fans of things like Buffy the Vampire Slayer, Scott Pilgrim, or Gunnerkrigg Court will not want to miss.
WHAT IT’S ABOUT: Susan, Esther, and Daisy started at university three weeks ago and became fast friends because their dorm rooms were next to each other. Now, away from home for the first time, all three want to reinvent themselves. But in the face of hand-wringing boys, “personal experimentation,” influenza, mystery-mold, nu-chauvinism, and the willful, unwanted intrusion of “academia,” they may be lucky just to make it to spring alive.[/quote]

[quote]Giant Days #2
Story by John Allison
Art by Lissa Treiman
Colors by Whitney Cogar
Letters by Jim Campbell
Cover by Lissa Treiman
Publisher Boom! Studios
Cover Price: $3.99
Release Date Apr 15th, 2015
When Freshers’ Flu strikes the dorm, no one gets off easy. Daisy enters a one-sided relationship with an off-brand Polish cold cure given to her by Ed Gemmell, Susan is forced into nicotine withdrawal, and Esther becomes incapable of distinguishing fever dreams from reality. Death stalks the dorm halls by night![/quote]

[quote]Giant Days #3
Story by John Allison
Art by Lissa Treiman
Colors by Whitney Cogar
Letters by Jim Campbell
Cover by Lissa Treiman
Publisher BOOM! Studios
Cover Price: $3.99
Release Date May 13th, 2015
Following a night of “mild abandon,” Esther finds herself singled out by the vile collegiate man-site “Bantserve.” When the university authorities are less than helpful, she vows to take down this cyber institution![/quote]

Description: Are drugs good, bad, or indifferent? Daisy is going to discover the truth for herself when she makes friends with the very fun Erin, who gives her some pills. Unfortunately, Daisy’s Granny decides it’s the perfect time for a surprise visit, and it’ll be up to Esther and Susan to help her keep it together.

[quote]Giant Days #5
Story by John Allison
Art by Lissa Treiman
Colors by Whitney Cogar
Letters by Jim Campbell
Cover by Lissa Treiman
Publisher BOOM! Studios
Cover Price: $3.99
Release Date Jul 15th, 2015
During a pre-Christmas ball, Daisy kisses a boy she shouldn’t have, while Susan may have done more than that with McGraw. Esther dreads going home for holiday break for fear of running into her ex.[/quote]

[quote]Giant Days #7
Story by John Allison
Art by Max Sarin
Colors by Whitney Cogar
Letters by Jim Campbell
Cover by Lissa Treiman
Publisher BOOM! Studios
Cover Price: $3.99
Release Date Oct 21st, 2015
It’s time for end-of-semester exams, but Esther was “too busy living” to attend most of her lectures and it’s up to Daisy and Susan to help her prepare. Meanwhile, Susan goes through the schmoopy romantic phase of a new relationship.[/quote]

Now an ongoing series! It’s Susan’s birthday and she receives the greatest gift at all: it’s time for the medical students to start cutting up cadavers.[/quote]

Esther, Susan, and Daisy start the search for a house to rent for their second year quite late, so their options leave a lot to be desired.
[/quote]

Daisy has to draw on new reserves of inner strength after she loses control of a party of prospective students on an open day, while the “lonely, unlovable spinster” Susan tries dating again with disastrous results.
[/quote]

McGraw’s new girlfriend is the Anti-Susan, Esther and Ed get into hot water with a money-making scheme, and Daisy has trouble with a professor on an archaeological dig.
[/quote]

Synopsis: The big end-of-year ball is approaching and Daisy is determined to kiss a girl, while Susan and Esther prepare for “a summer of difficulty.”[/quote] 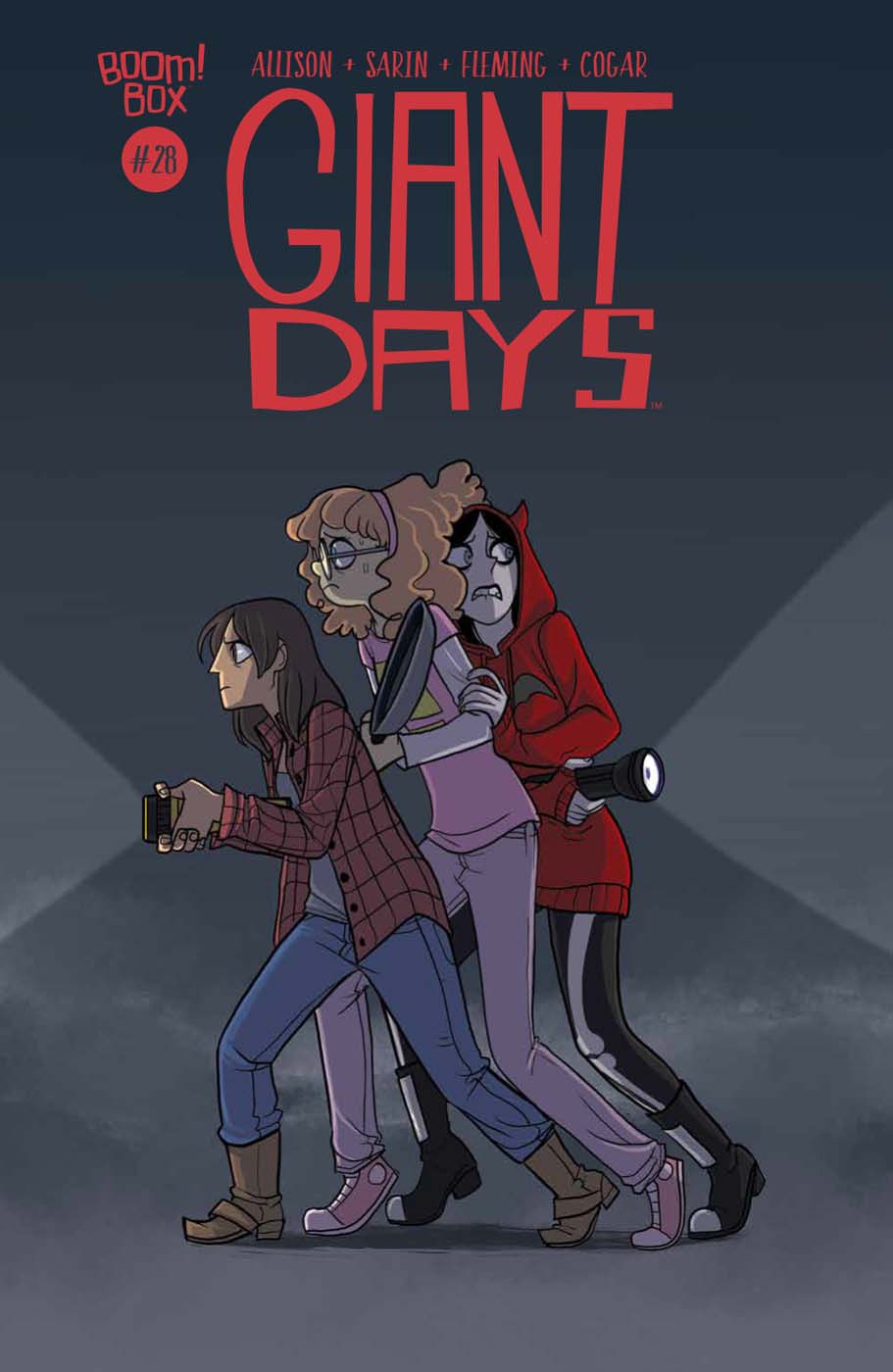 Description: What’s the secret of the shed in the back of the girls’ house, and why are strange men visiting it in the middle of the night?! 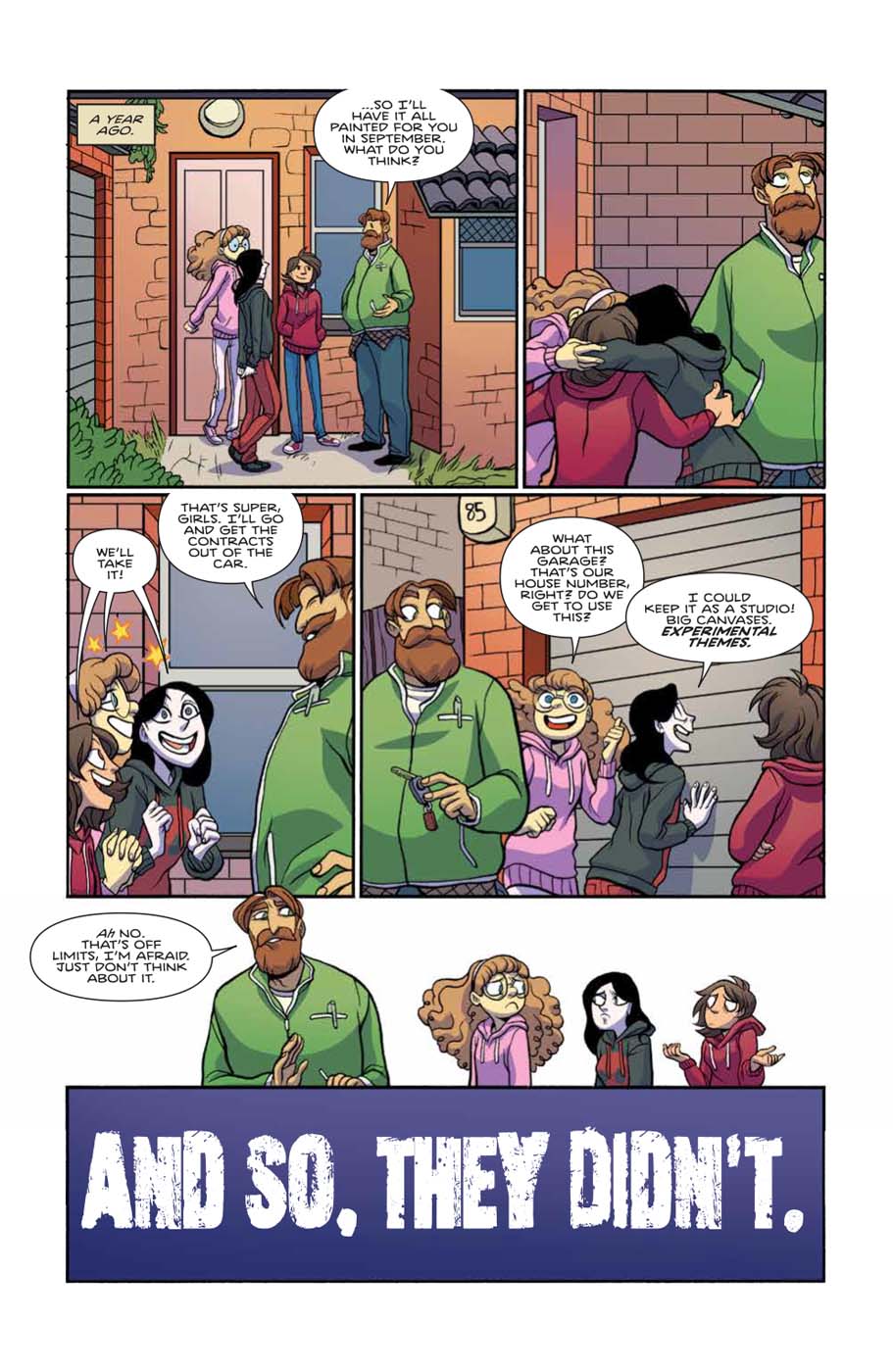 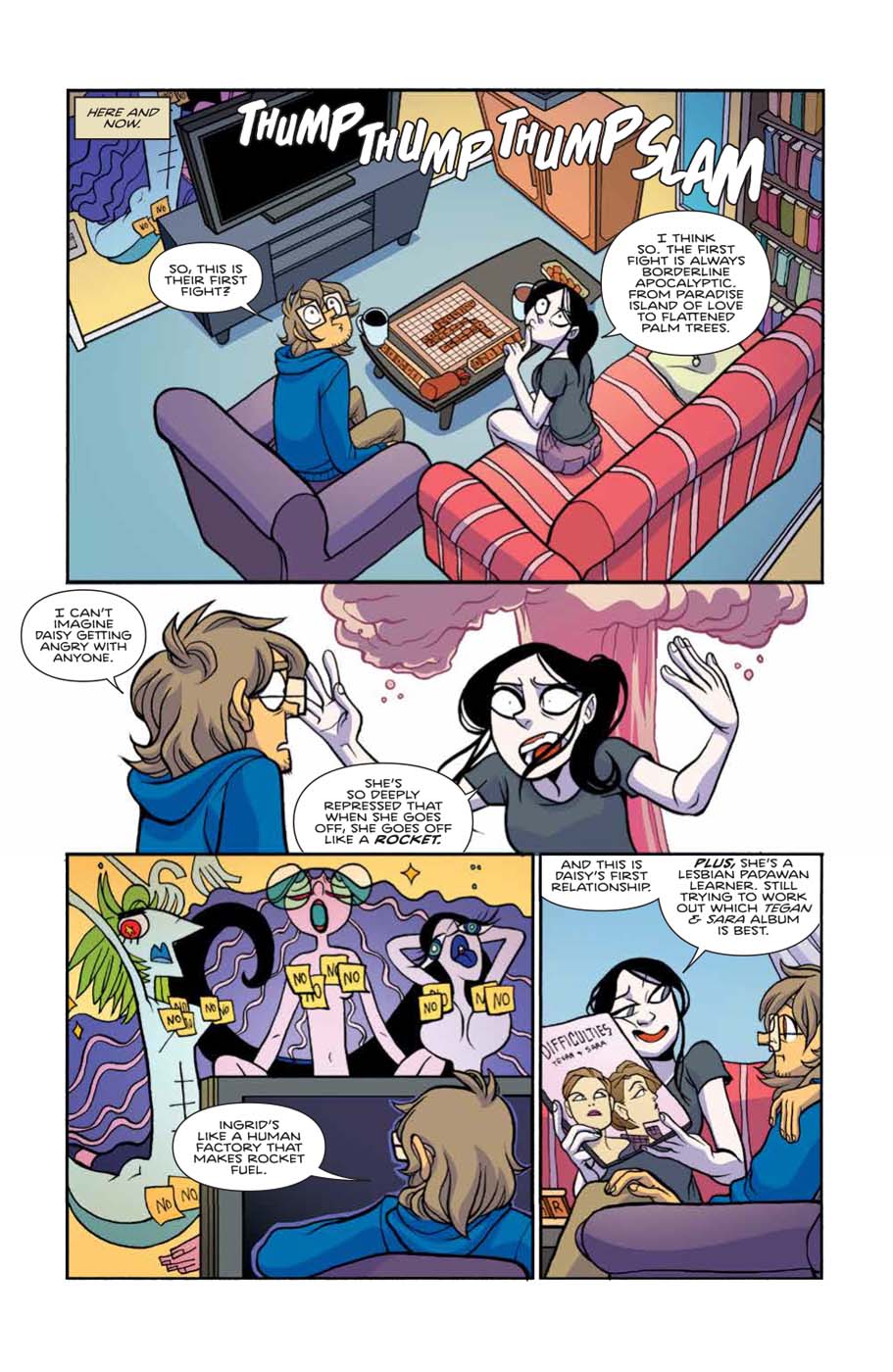 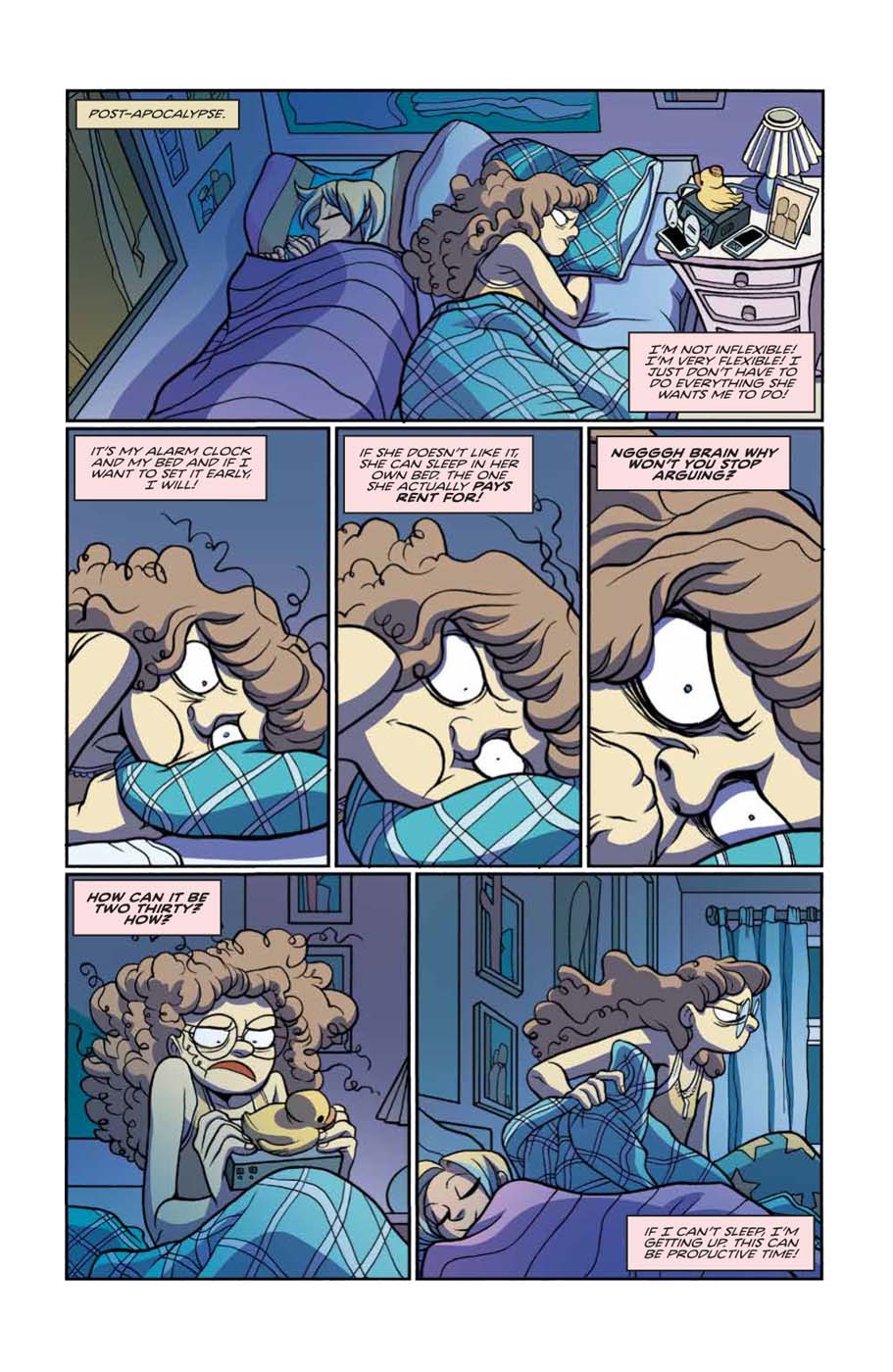 "Where are they now? Well, 14 months after graduation, Esther, Susan and Daisy have moved onto different careers, friends, and lives, and it’s safe to say that things aren’t quite the same. Their reunion in Sheffield is their chance to reconnect and rebuild the close-knit best friendships they all had while at university, but Esther’s a publishing muckety muck in London now and not sure she can make time for her old friends.

“Will she be able to escape the time-sucking vortex of her vampiric co-workers, the Cressidas, and their awful influence long enough to make the reunion? Will Susan and Daisy ever forgive Esther if she doesn’t show up? Is this the absolute end for our favorite Sheffielders? And what’s McGraw doing all day at the local key shop?”

“This comic has always been about small moments and big catastrophes, so going out with a double-sized special gives me a chance to do plenty of both. It’s impossible to please everybody when you’re saying goodbye, but heaven knows, the Giant Days team are going to try.” 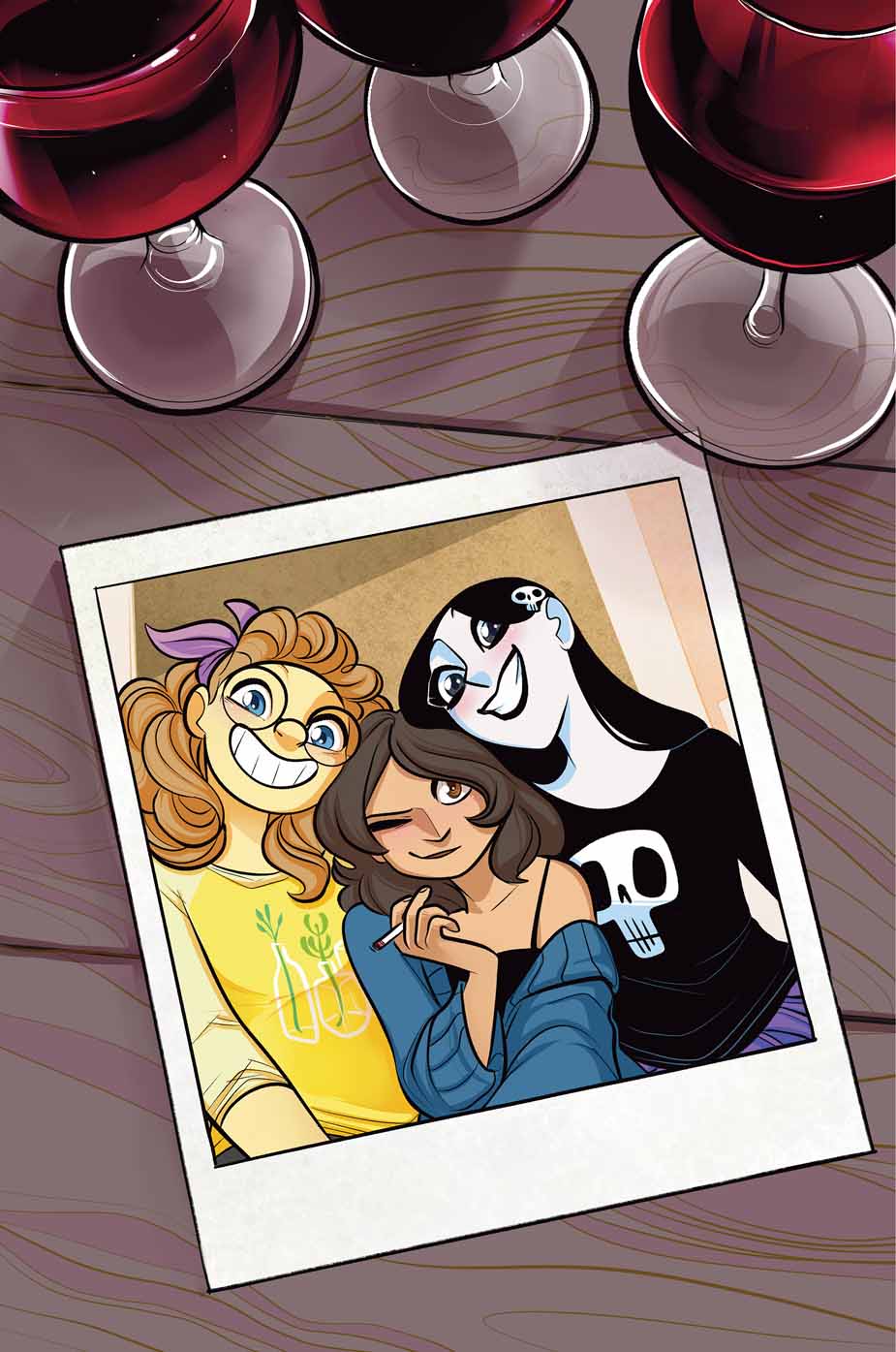 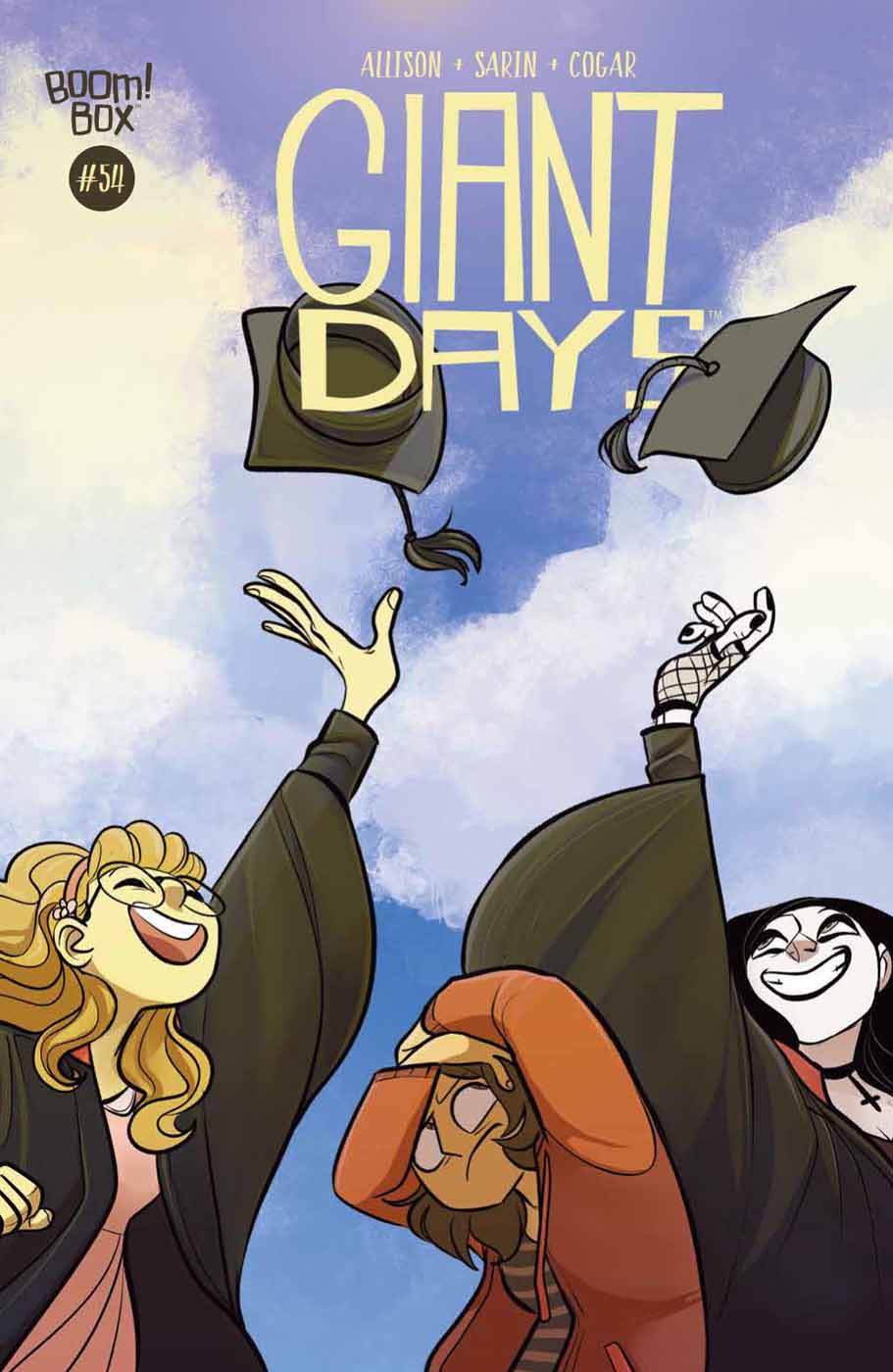 Description: Summer is ending, and so are Daisy and Esther’s days at university (Susan still needs to finish medical school, of course). These last days together are worth their weight in gold, but soon it will be time for pomp, circumstance, and silly hats, as the girls head out into the world and face their futures! 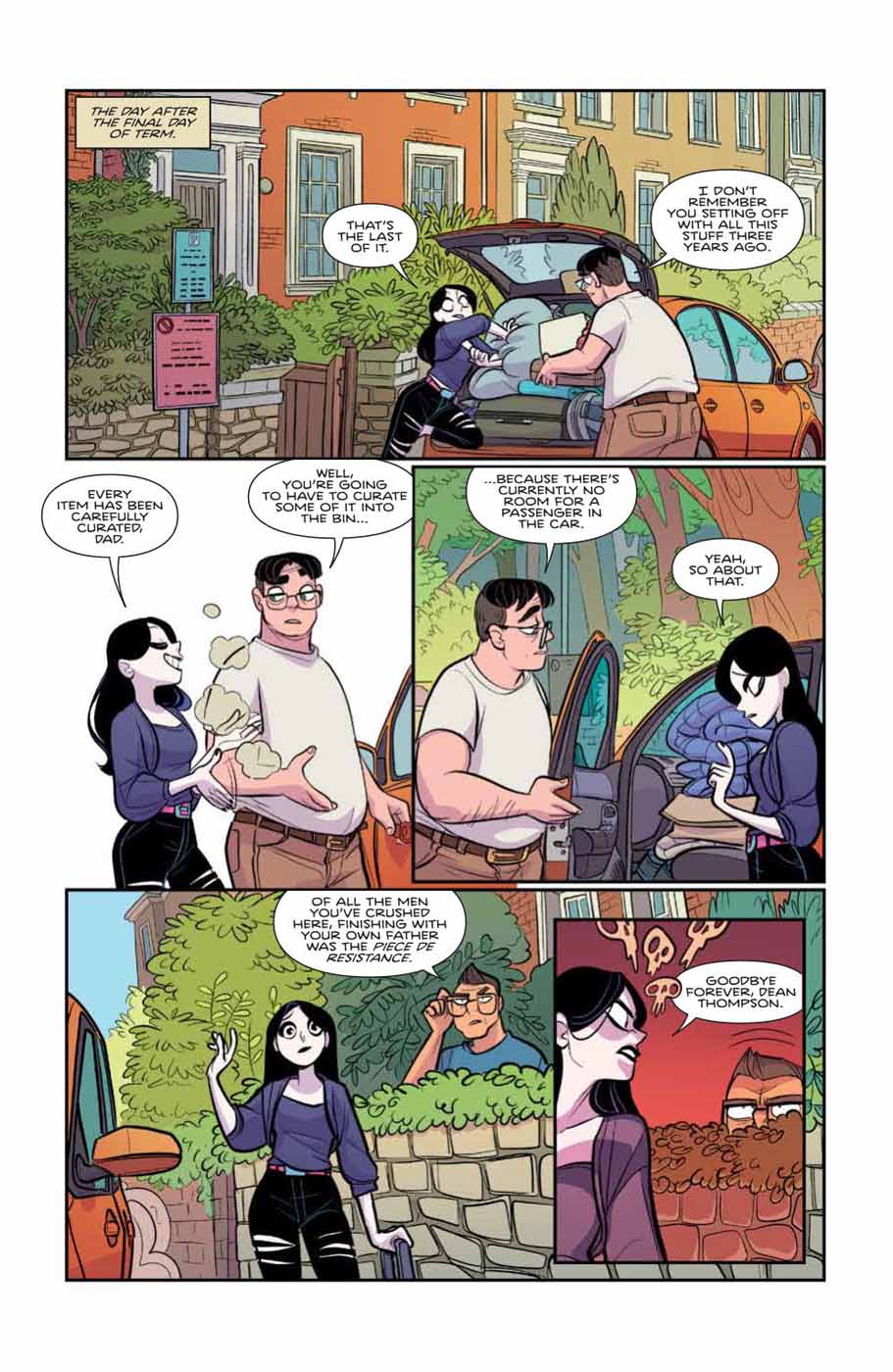 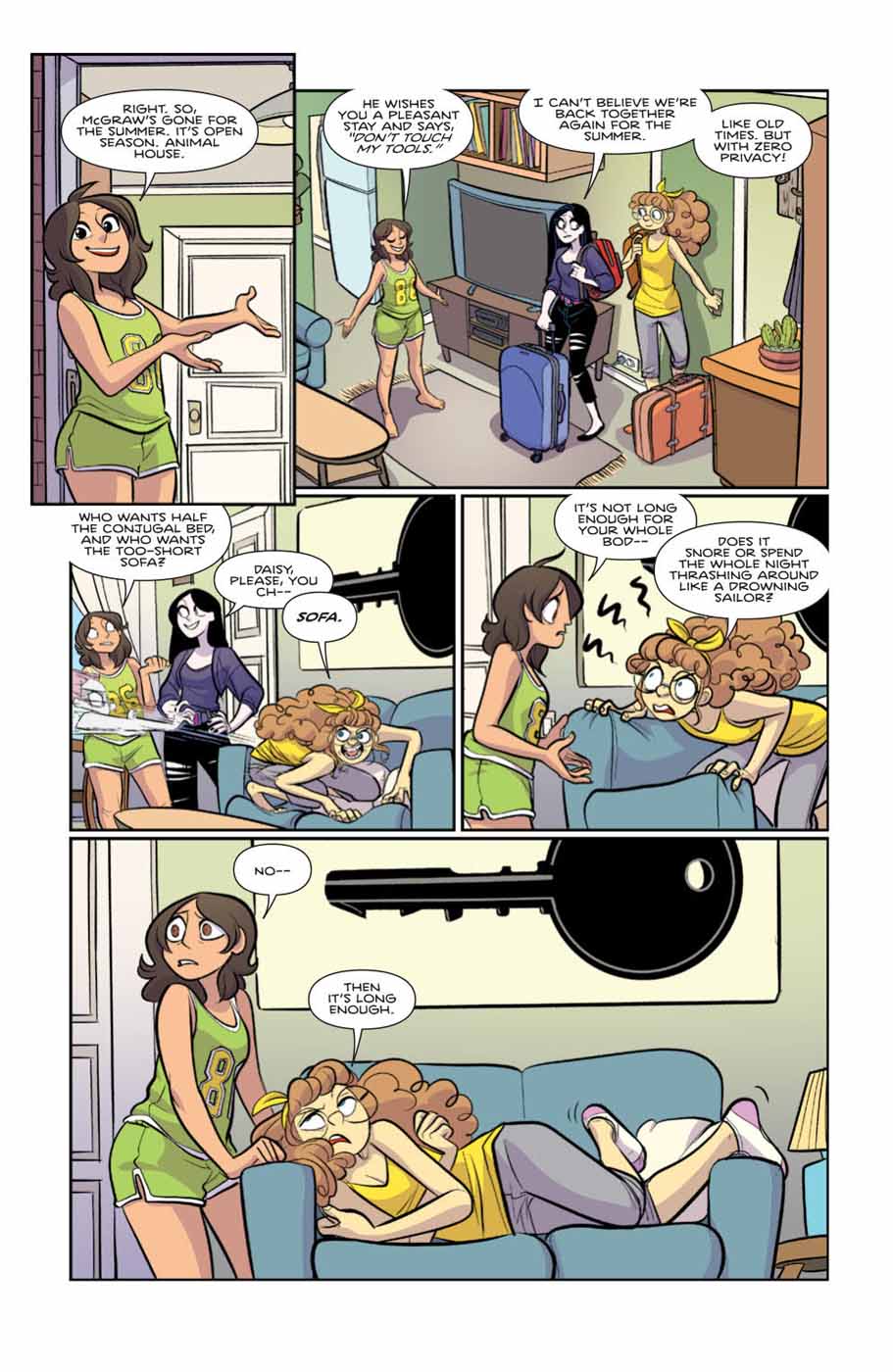