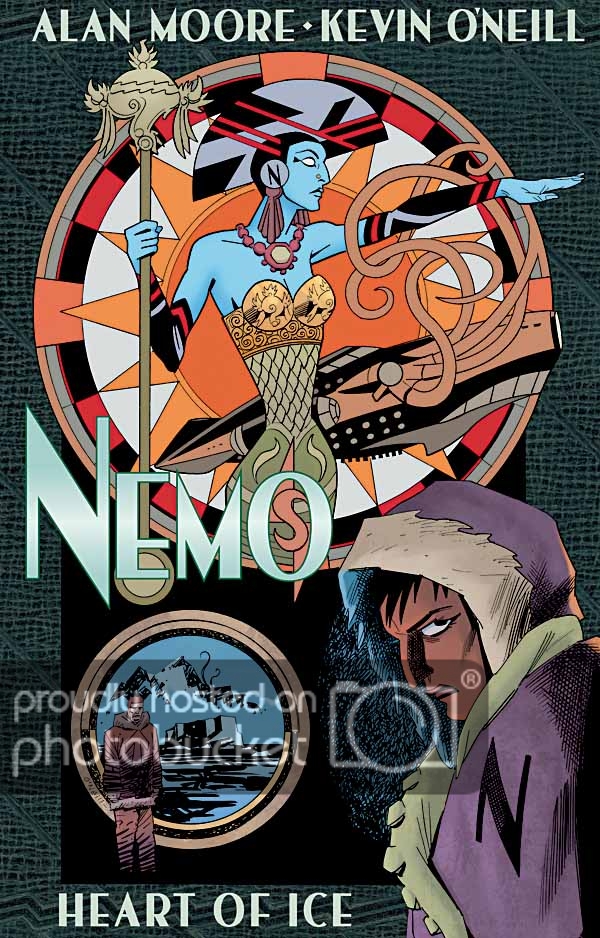 It’s 1925, fifteen long years since Janni Dakkar first tried to escape the legacy of her science-pirate father, only to eventually take on his mantle and accept her destiny as the new Nemo; the next captain of the legendary Nautilus. A thirty year-old Pirate Jenny, tired of punishing the world with an unending spree of plunder and destruction, is resolved to finally step from her forebear’s lengthy shadow by attempting something at which he’d conspicuously failed, namely the exploration of Antarctica. In 1895 her father had returned from that ice-crusted continent without his reason or his crewmen, all of whom appeared to have mysteriously perished or to otherwise have disappeared. Now Captain Nemo’s daughter and successor plans to take her feared and celebrated black submersible back to the world’s South Pole in an attempt to lay her sire’s intimidating ghost forever.

There are others, though, who have become as tired of Janni’s freebooting as she herself. An influential publishing tycoon, embarrassed by the theft of valuables belonging to a visiting Ugandan monarch, sets a trio of America’s most lauded technological adventurers on the pirate queen’s trail, commencing a nightmarish chase across the frozen landscape with the pinnacles of the forbidding mountains where Prince Dakkar’s sanity had foundered growing ever nearer…

In a fast-paced, self-contained adventure, Alan Moore and Kevin O’Neill thrillingly expand on one of Century’s most memorable characters, venturing into dazzling polar territories and fictional domains including those of Edgar Allen Poe and H. P. Lovecraft, with all of these vectors headed for an unforgettable encounter at the living, beating and appallingly inhuman HEART OF ICE.*[/quote]