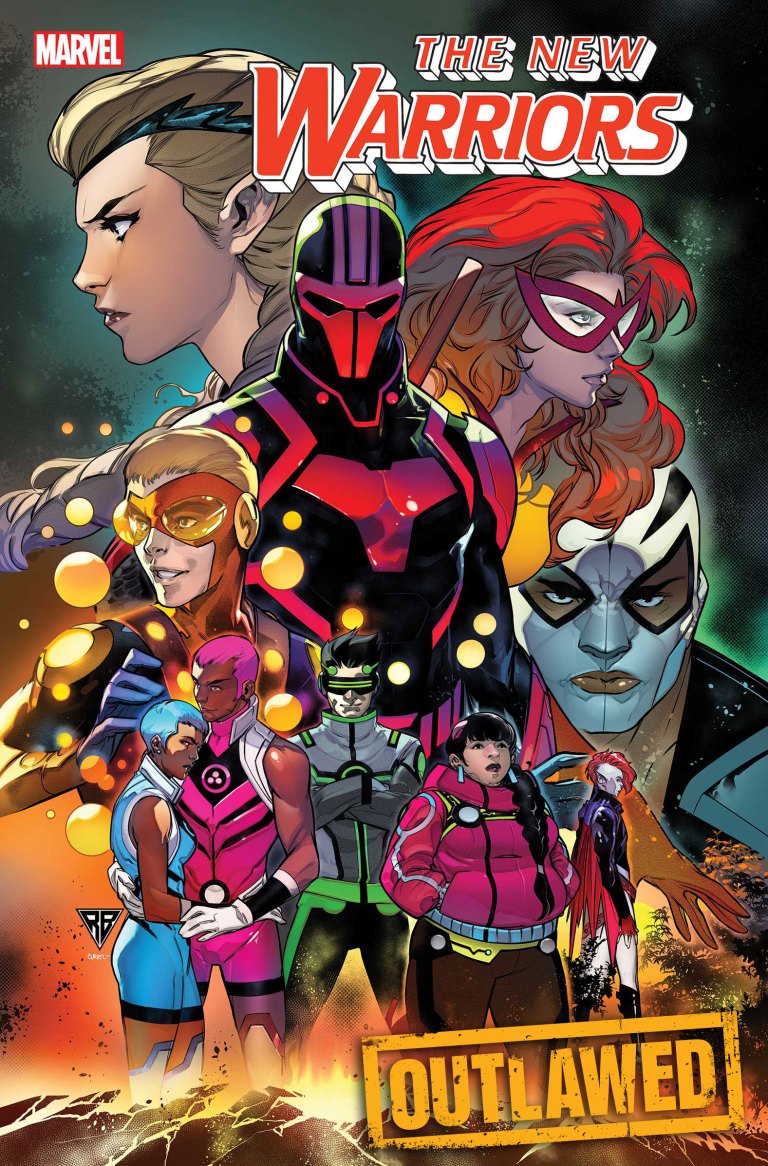 SYFY Wire has the scoop on writer Daniel Kibblesmith and artist Luciano Vecchio’s NEW WARRIORS where fans will get to reunite with old friends and meet new ones! The series will show Night Thrasher reuniting with classic New Warriors Firestar, Rage, Speedball, Namorita and Silhouette to mentor a whole new group of young heroes. Get your first look at these mysterious new heroes, and stay tuned for more information on them in the weeks to come! 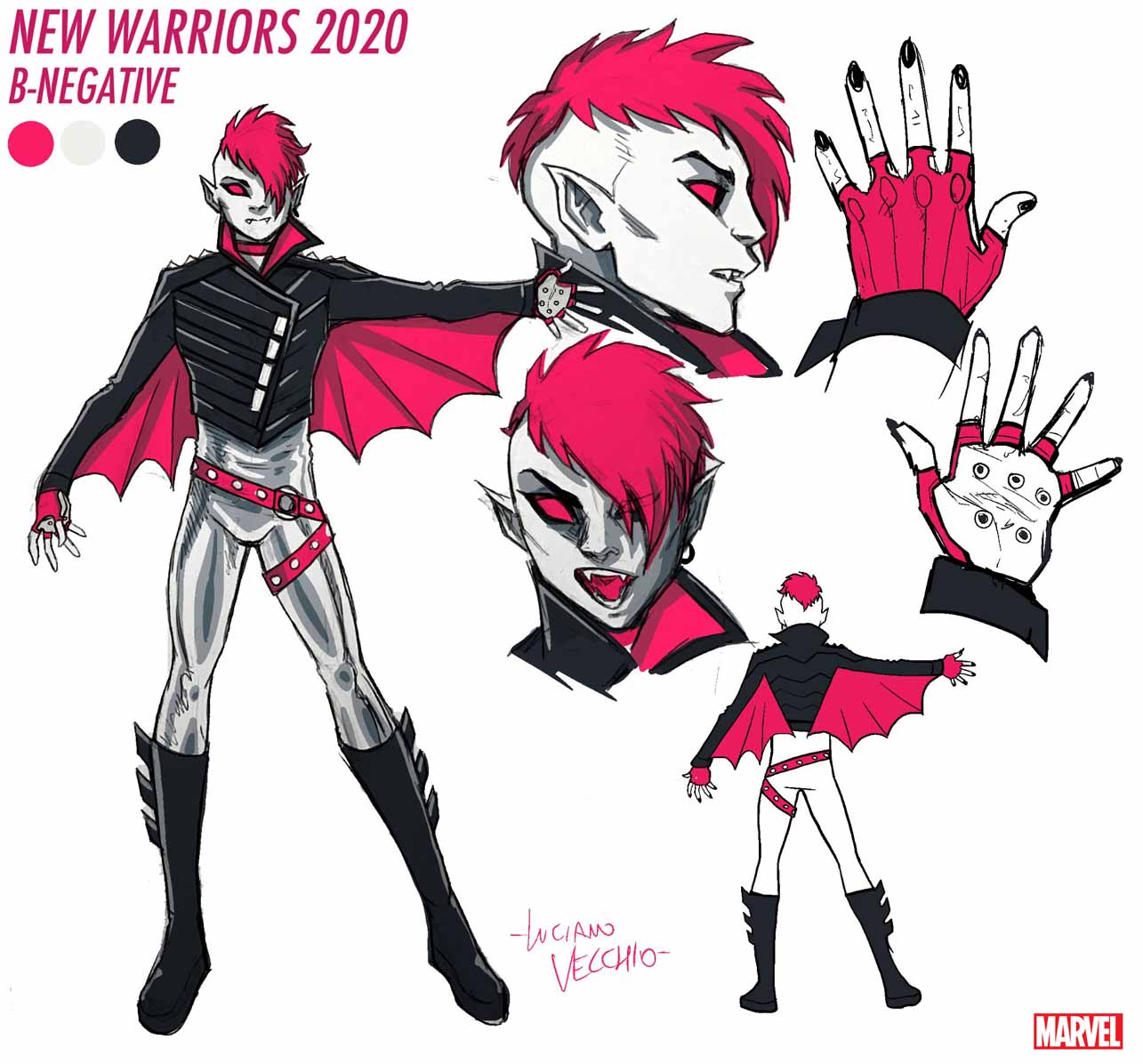 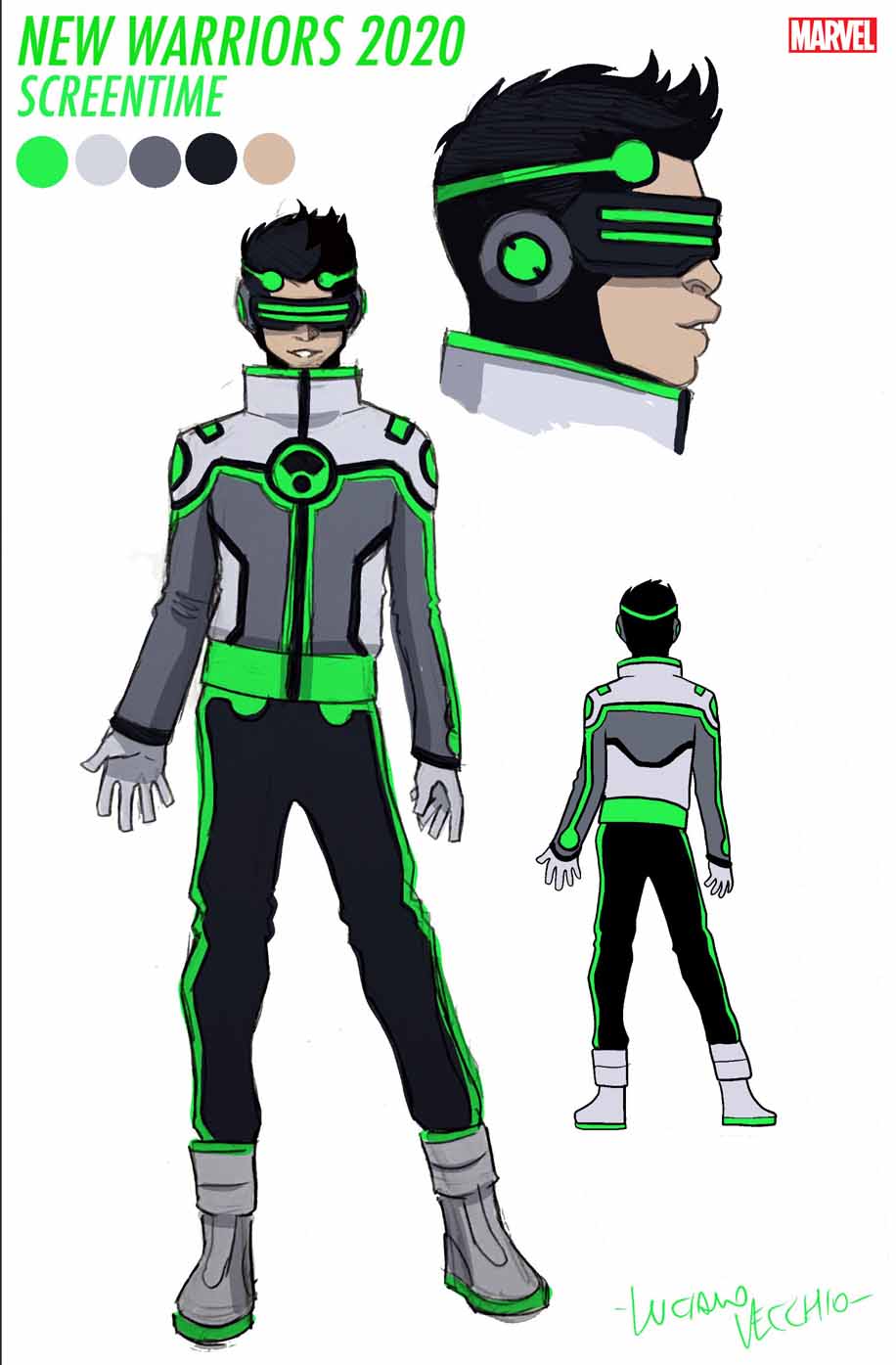 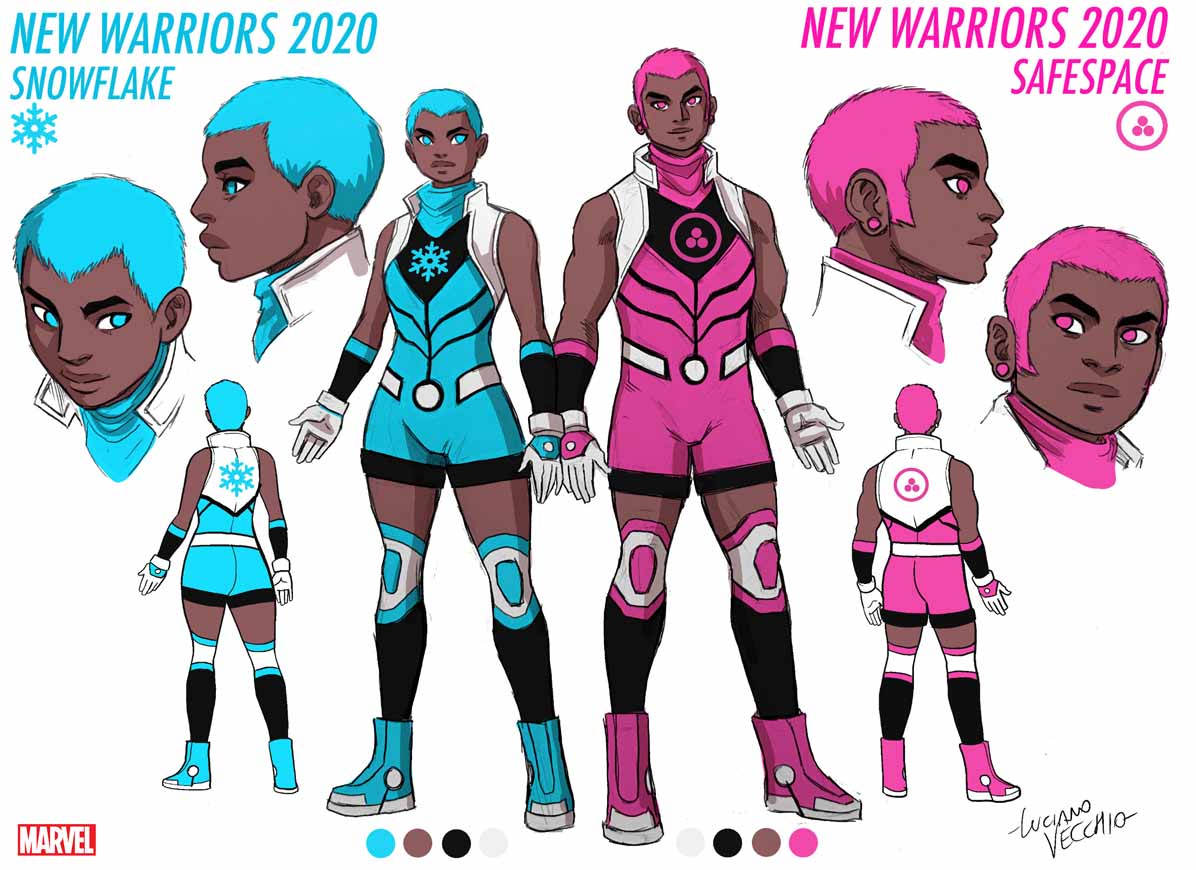 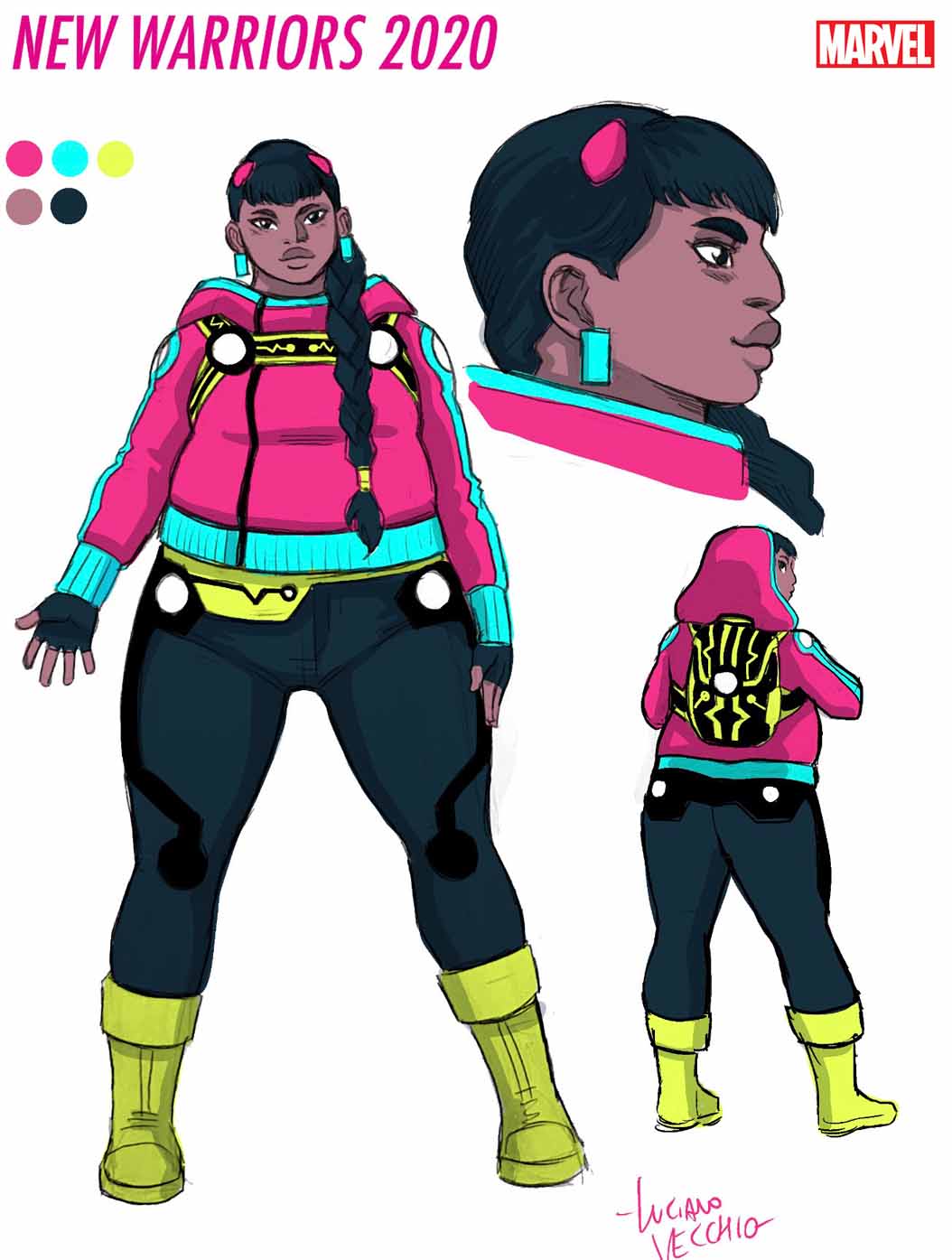 TRAILBLAZER: A regular kid scooped up into the world of teenage super-heroing. Her « magic backpack » is actually a pocket dimension with seemingly infinite space, from which she can pull out useful or random objects – it’s not always under her control. She claims to get her power from god, but « not the god you’re thinking of. »

« Trailblazer wants to help people, but she doesn’t think of herself as a super hero – yet, » said Kibblesmith. « The Marvel Universe is a reflection of our own, and when a new law gets put into place, it affects people in unforeseen ways. »

SCREENTIME: A meme-obsessed super teen whose brain became connected to the internet after becoming exposed to his grandfather’s « experimental internet gas. » Now he can see augmented reality and real-time maps, and can instantly Google any fact. Does this make him effectively a genius? He sure acts like it does.

« The word ‹ screen time › is only ever used in a sort of restrictive sense, and because we’re doing a story about teenage rebels, a lot of the names are about teens fighting against labels that are put on them, » Kibblesmith said. « So with Screentime, we liked the idea that he has infinite screen time. »

SNOWFLAKE AND SAFESPACE: As psychic twins, Snowflake, a cryokinetic, can materialize snowflake-shaped shuriken projectiles for throwing. Safespace can materialize pink forcefields, but he can’t inhabit them himself, the reflex only works if he’s protecting others. They’re hyper aware of modern culture and optics, and they see their super-heroics as « a post-ironic meditation on using violence to combat bullying. »

« [Snowflake and Safespace] are very similar to Screentime; it’s this idea that these are terms that get thrown around on the internet that they don’t see as derogatory, » Kibblesmith said. « [They] take those words and kind of wear them as badges of honor…Snowflake is the person who has the more offensive power, and Safespace is the person who has the more defensive power. The idea is that they would mirror each other and complement each other. »

B-NEGATIVE: A teen living vampire exposed to Michael Morbius’s blood as a child in a rogue, but life-saving medical procedure. He still ages like a regular kid, but has all the abilities of Morbius. He’s also obsessed with all the music and attitude of a « classic » long-past decades like the '90s, and the '00s.

« B-Negative is the goth kid, » Kibblesmith said. « When he was a baby he got a rogue lifesaving blood transfusion, we assume, from Michael Morbius. And now he has a very similar look, and very similar vampire powers…B-Negative ages like a regular person – or does he? – and he definitely drinks blood – or does he – but designer/artist Luciano Vecchio took brilliant inspiration from the '90s Spider-Man cartoon and gave B-Negative the ‹ leech suckers › that the animated version of Morbius had on his palms. »