[quote=“Oliver”]We’re back in London, as Constantine has unfinished business. But of course one thing leads to another and the deal he did to get Swamp Thing’s help keeping the DCU at bay spirals into a new story, to find Abby who has vanished from the Rot.

It goes back to some New 52 continuity. There was an implied suggestion that John had to leave London because of a “curse,” but it was vague, so I joined the dots and came up with “Laughing Boy” as the demon behind the curse. It was a bluff that saved John’s ass that time, and one that Laughing Boy turns back on John.[/quote]

oooooo! Kristy Quinn (the editor) is giving me such a good opportunity to be able to be able to control aspects of the finished artwork so that I can try out all kinds of effects I’ve been sitting on and burning to use! This is one of the most exciting parts of this book! I can talk for hours about it, but it would be better to show everyone.

[quote=“Moritat”]The escapist genre is great. I love it. But the fans of this book are different. There is the stereotype of someone with a boring job, gets on a bus or train after work to read their fantastic escapist story and the black and white resolution. Readers of this book, I found out, are not that crowd. John Constantine spends 600 pages tricking the devil and he has more problems than when he started? What? Heroes who visit the fringe of the DC universe are going to be explored not in the way they will in their own books.

So “being grounded in the real world” is important for this book. The readers seeking out John Constantine are a bit more disillusioned and accepting of the “real world.” the art has to reflect those sentiments. What if you don’t have a job? What if something terrible happens on the way to the bus or bus stop? I have to approach the artwork that way.[/quote]

I’m going to bring in some DCU characters, but I really see it more like me bringing them into his world, rather than the other way around. I’ve been given the luxury of having a book that’s not tied into the bigger picture and intend to use it to have some fun. John is a little like me, he wouldn’t be a part of any club that would have him—and I’m not too sure that the superheroes really know what to make of John.

[quote=“Oliver”]I was asked to take him back to his roots – and as the first British writer to work on the book in a while, it was kind of a no-brainer that that would be what I was doing with him.

I’m not ignoring the DCU stuff, but to me he’s grounded in the Vertigo version. Content-wise there’s stuff I can’t do because it’s not a Vertigo book, but in terms of who he is, and the world he lives in? That’s how I’m approaching it. He’s back to being a cynical bastard.[/quote]

[quote=“Moritat”] I’ve drawn Batman since I was a little kid, but it wasn’t until recently that I got to draw a Batman who appeared in a DC comic. When it finally happened I had to completely rethink everything I knew about Batman.

The same was true for John Constantine. I would say come and read the book with us as we find out![/quote]

John Constantine’s lost weekend in New York City was fun, but London’s where his heart is—only a pissed-off demon and a curse on his soul stand in his way. Even Constantine’s questionable ethics are pushed to the limit when he puts eight million souls on the line to get what he wants….

“The Poison Truth” part one! London may have recovered from Constantine’s return, but he hasn’t. Mercury hasn’t forgiven him, but she won’t leave him alone, and Swamp Thing is calling in a favor. And all the while, bigger things are brewing…[/quote]

Description: “The Poison Truth” part two. No one likes rejection-least of all John Constantine. But even if three’s a crowd, he’s going to find a way to get involved in Swamp Thing’s hunt for Abigail Arcane!

[quote=“Jack!”]…]
“The Poison Truth” part one! London may have recovered from Constantine’s return, but he hasn’t. Mercury hasn’t forgiven him, but she won’t leave him alone, and Swamp Thing is calling in a favor. And all the while, bigger things are brewing…[/quote]

“THE POISON TRUTH” part three! In Constantine’s world there are old friends, useful friends, dangerous friends…and then there’s Chas, whose screw-up threatens them all.

“The Poison Truth” part five! John’s gotten the djinn off his back, at least for the moment. Now he needs Mercury. As they leave English shores behind, it’s time for a heart-to-heart as Mercury tells John what happened to her while Swamp Thing was battling the Rot.

Description: “The Smokeless Fire” part 1! Constantine once heard a ghost story in a Parisian bar, and maybe the old man wasn’t just telling tales. So he takes Mercury in search of the only man he knows who’s encountered the Djinn. Problem is, they’re not the only people looking! 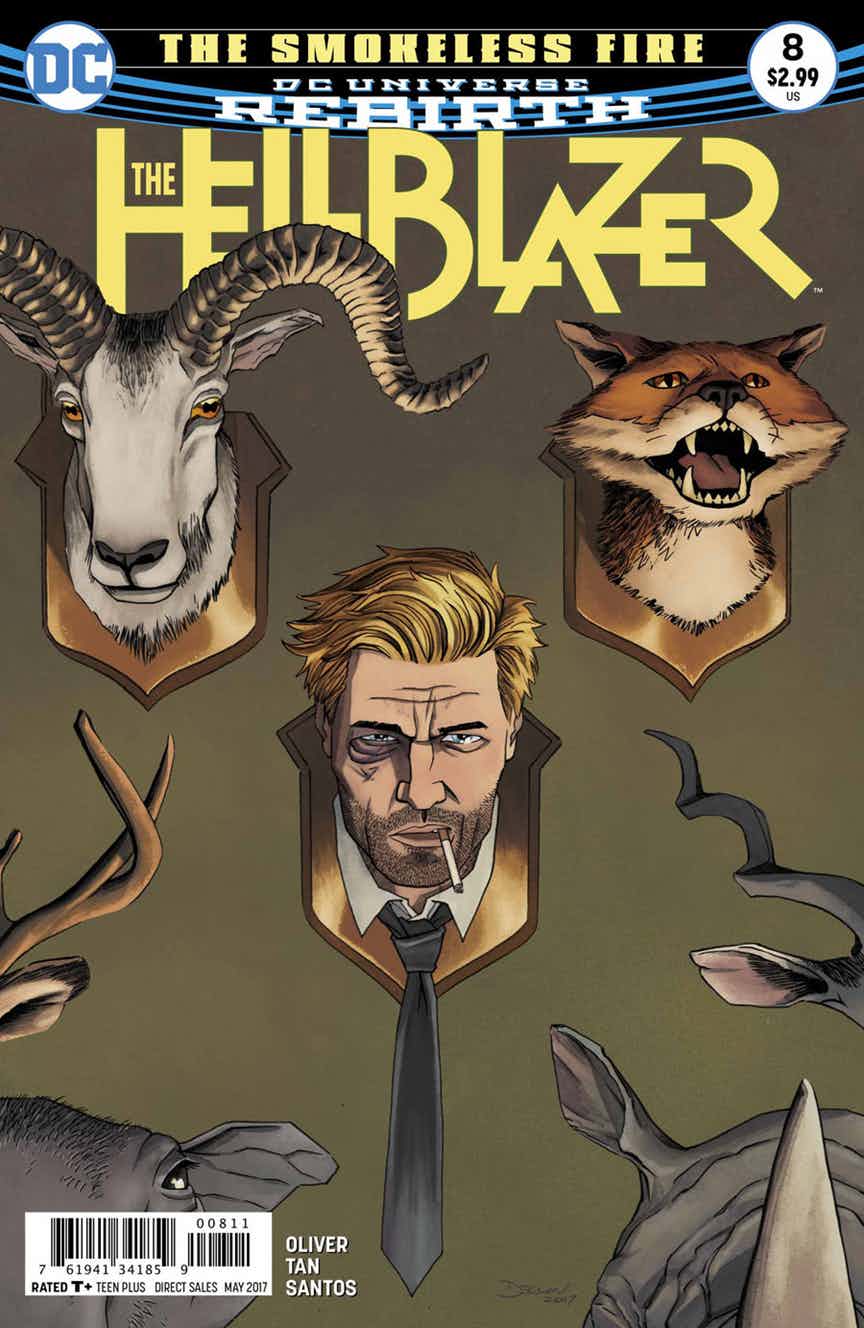 Description: “The Smokeless Fire” part 2! Mercury tries to save John from his own worst impulses, but Constantine’s got the bit between his teeth on this hunt for the Djinn. A new character emerges from the shadows, an uneasy alliance is formed, John Constantine goes all magician on us and Paris may never be the same again. 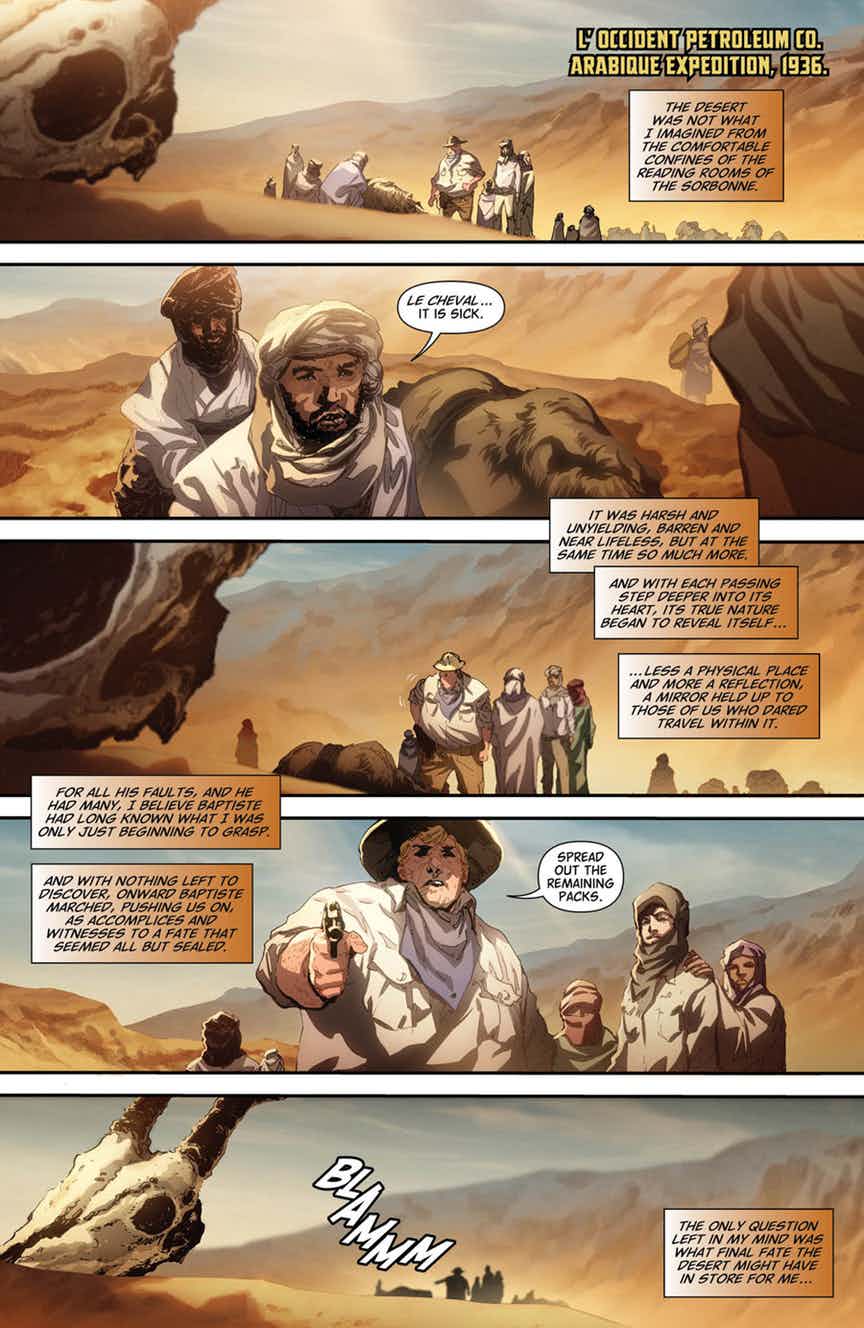 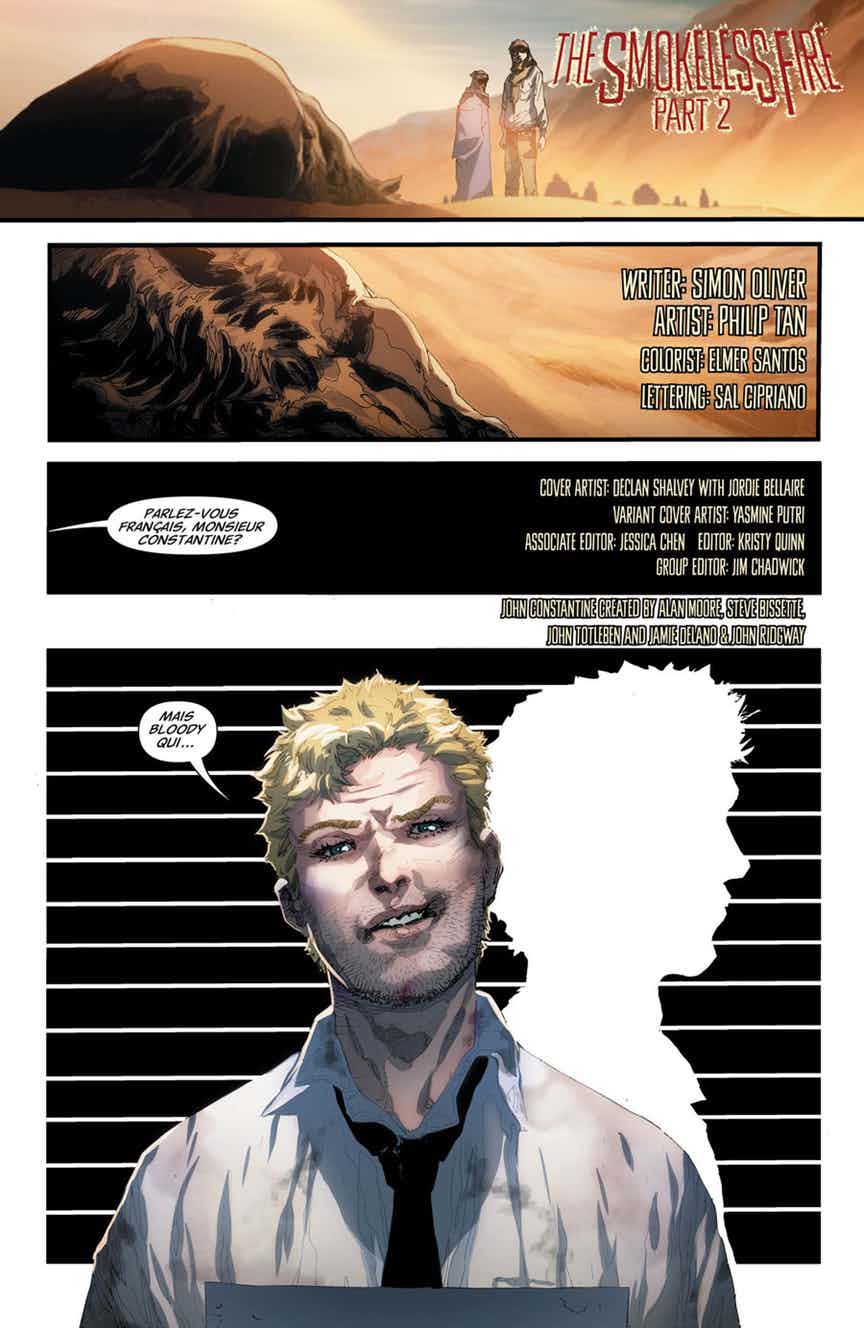 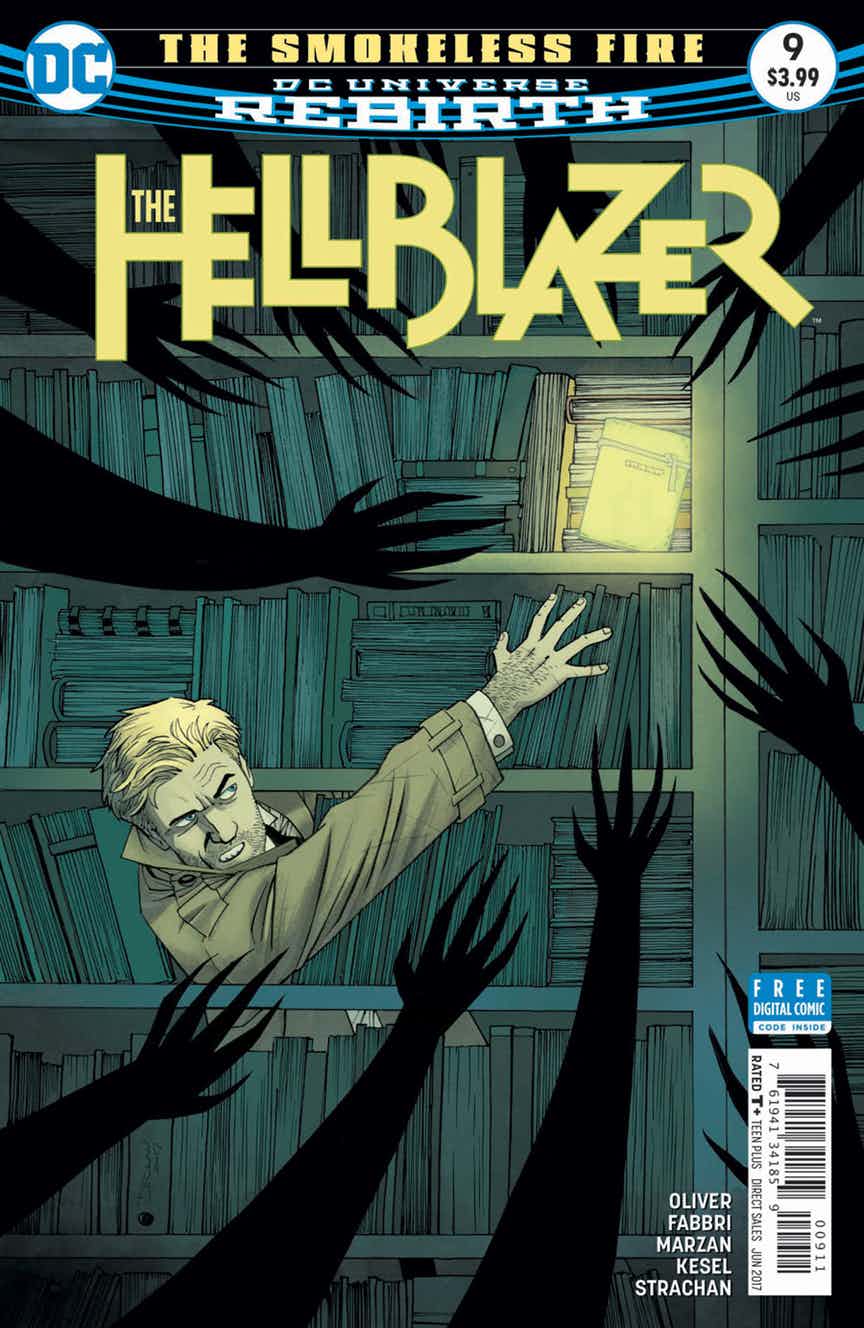 “The Smokeless Fire” part three! Magic is all very well, but in the City of Light John and Misabel’s hunt for the missing journal has become a battle of wits—and Constantine may finally have met someone more slippery than he is. Meanwhile, Marid’s plan moves into London’s corridors of power…and an Angel loses his wings.[/quote] 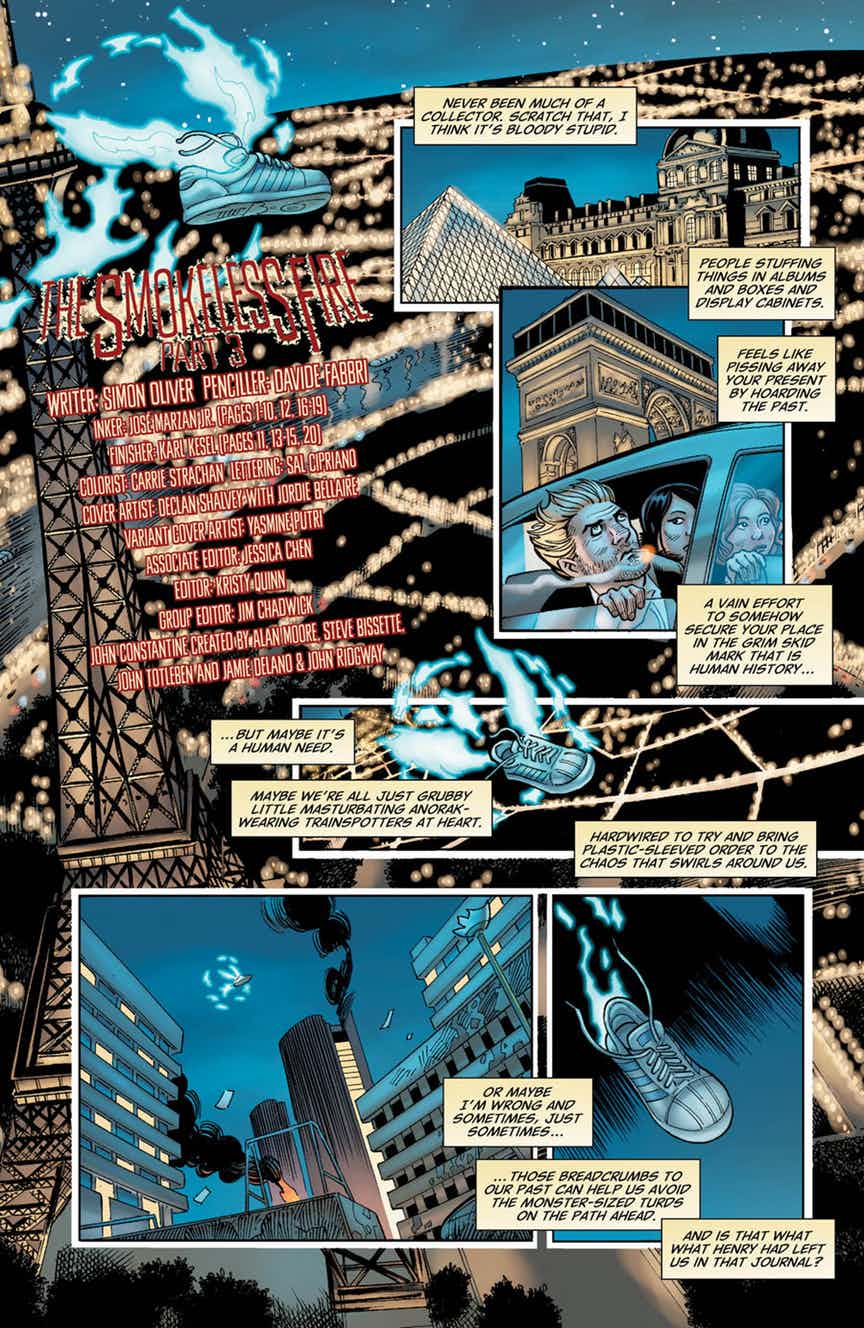 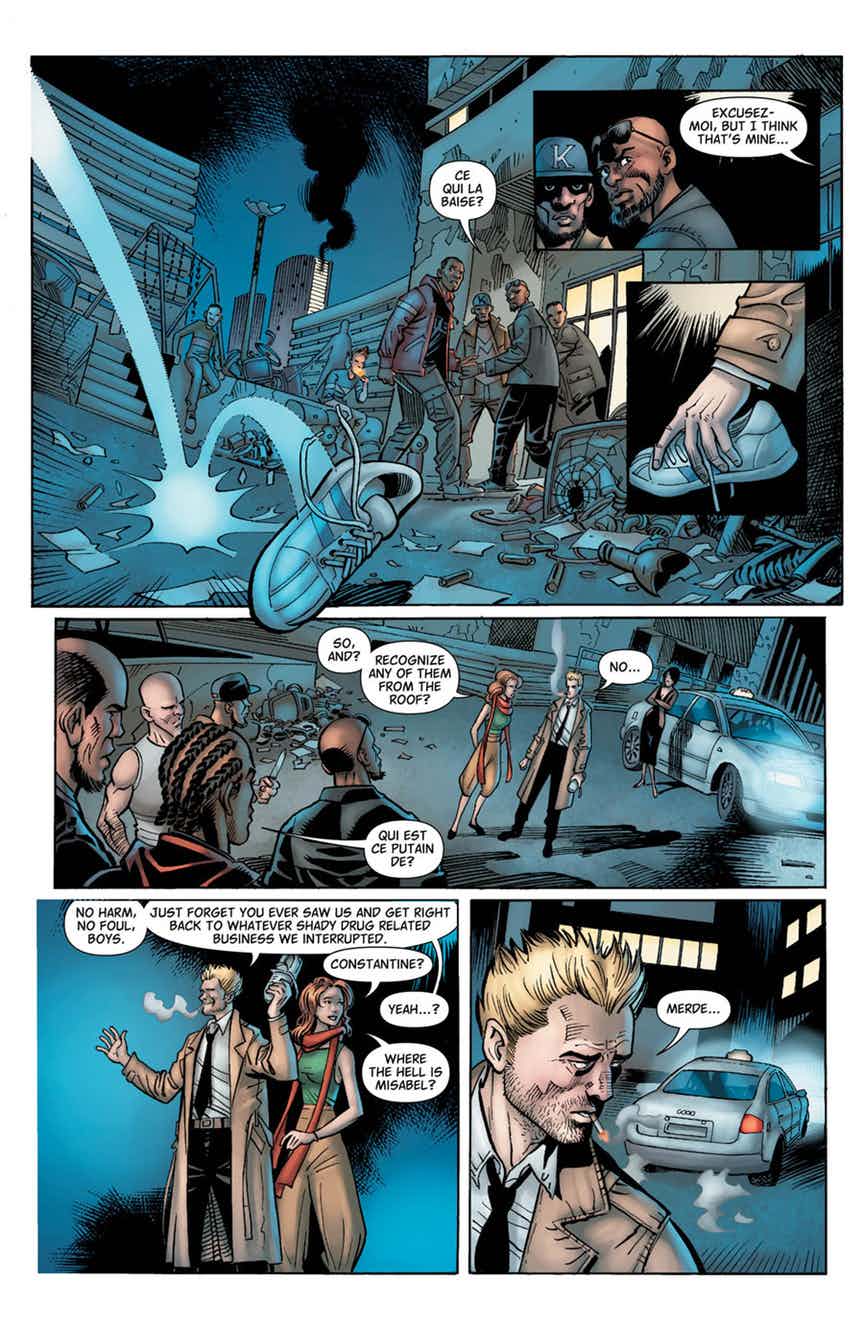 “THE SMOKELESS FIRE” part four! John Constantine has a lead on the missing journal, but has Misabel created a false trail? Mercury doesn’t trust the looks of the club where they end up, and only an old enemy can save them! 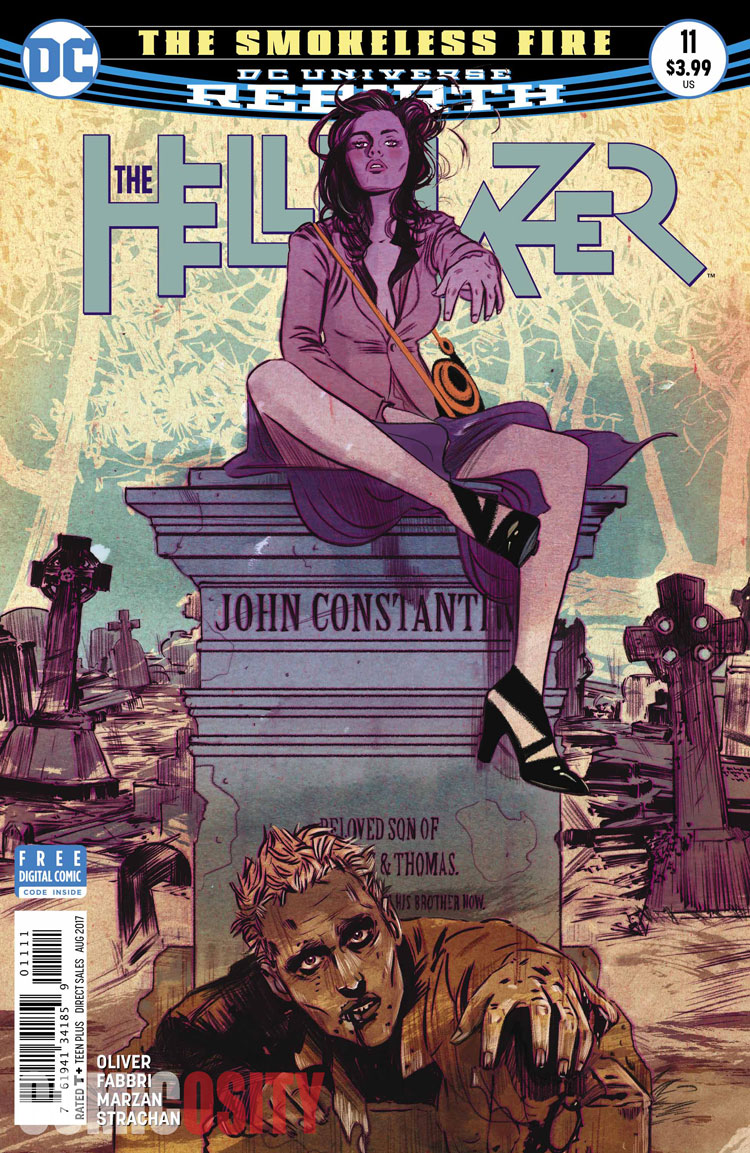 “The Smokeless Fire” part five! Constantine thought about taking an old frenemy’s advice, but Paris has bistros to sit in and wine to drink. With a little patience and a little magic, things have a way of sorting themselves out. Unless Marid crosses the finish line first, that is.[/quote] 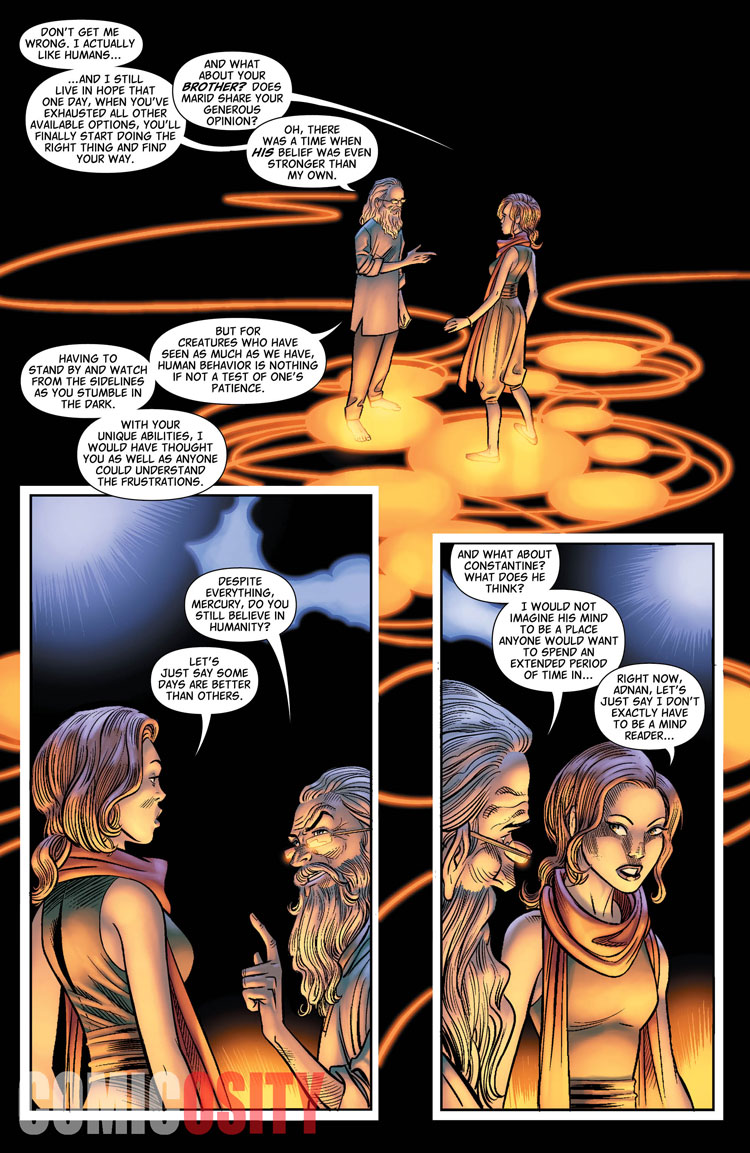 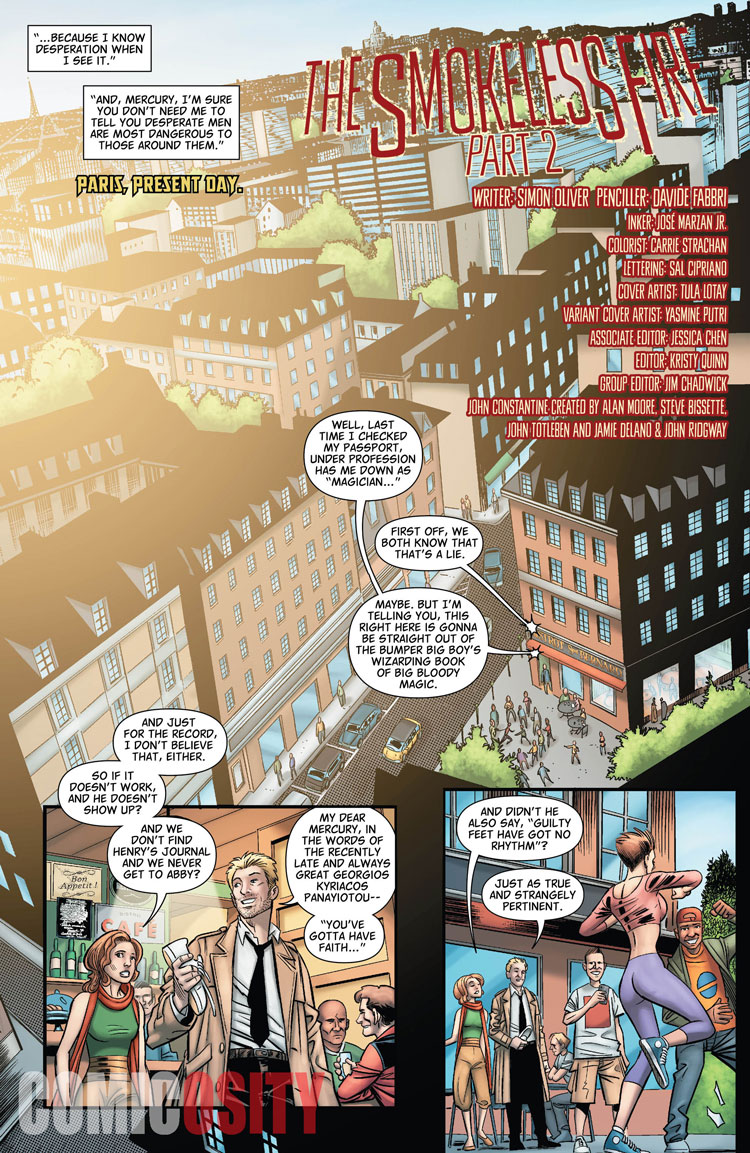