Brian will send me the script for the issue and we will then yell at each other over Skype discussing the this and that of the story. Then I’ll go work on the layouts, scan them and send them over to Brian. We then Skype again, yell some more and I’m off to the drawing table. As soon as I have finished pages, I scan them and pass them on to Muntsa. Since she’s my partner, I get to watch over her shoulder as she colors and give her directions over color tones, hues and the like until there’s more yelling and she tells me to piss off. And when I come back the pages are done and look excellent. As I said, your typical comic book fare. 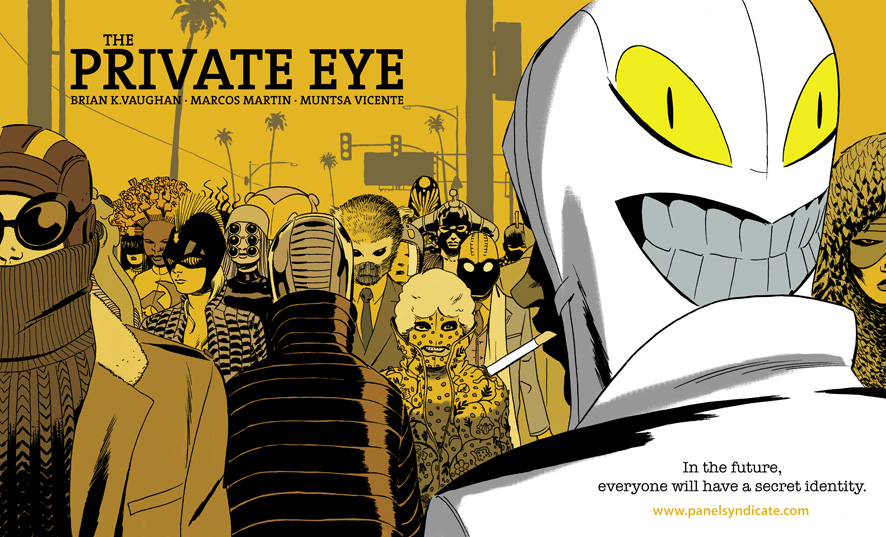 I don’t know if it could work as a business model for everyone, but Panel Syndicate has definitely worked for us. Marcos just wrote to tell me that we recently celebrated our 300th consecutive day of sales, even though readers always have the option of paying nothing. So thanks. And the last three weeks have seen our highest number of downloads since the launch of “The Private Eye” #1. We seem to be picking up momentum now that readers realize that Marcos and I really do intend to finish all 10 issues of this digital series, and that we have absolutely no plans to release a physical version of this story.

[quote]The digital aspect of The Private Eye is what interested me most about the project. I think the possibilities we have now with the Internet are huge in terms of reaching new audiences all over the world; the potential readership right now is huge, and I think we need to explore that. In some ways, I think with The Private Eye we’ve succeeded in that and we’ve been able to reach a lot more of the mainstream audience than we ever would have as a physical book distributed the traditional way through comic shops.

For example, here in Spain The Private Eye has been featured in many newspapers, including our country’s top newspaper. When that article came out, we got over 10,000 downloads in just a few hours. There were people who woke up that morning with no intent to buy a comic or go to a comic shop, but when they read the newspaper article online they could download it in just two clicks. Even if they got it for free they still read the comic. So through our model we were able to reach an audience who aren’t the typical comic book audience and perhaps contribute to get more people interested in our medium.[/quote]