I try to put character first and foremost in every story that I write, and that’s certainly going to be the case with “Wrath of the Eternal Warrior.” As far as my take on him and how it may differ from what we’ve seen before, I think you’ll start to get a sense of that in “Book of Death,” and how he’s different from everyone else around him. I think in comics it’s easy to equate heroes to all being the same in how they act, but Gilad is truly is unique. Not just because he’s immortal and what he’s gone through, but because his viewpoint is different from everyone else in the Valiant Universe. 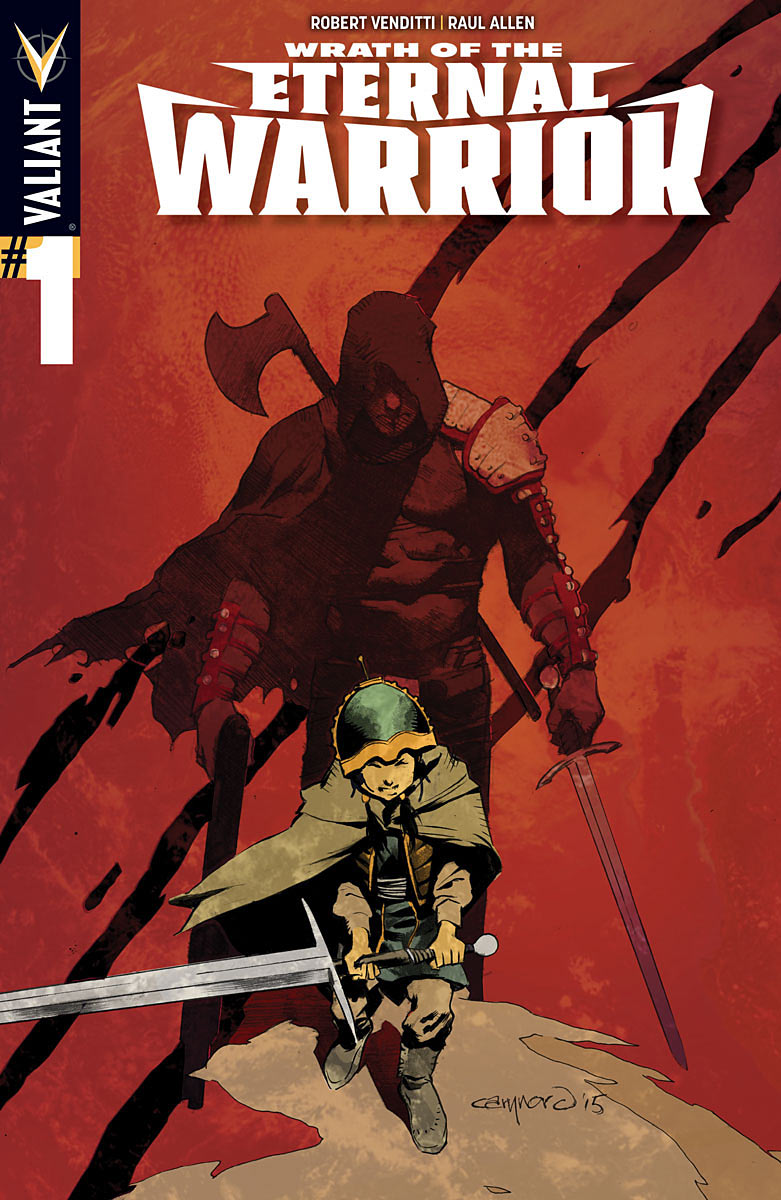 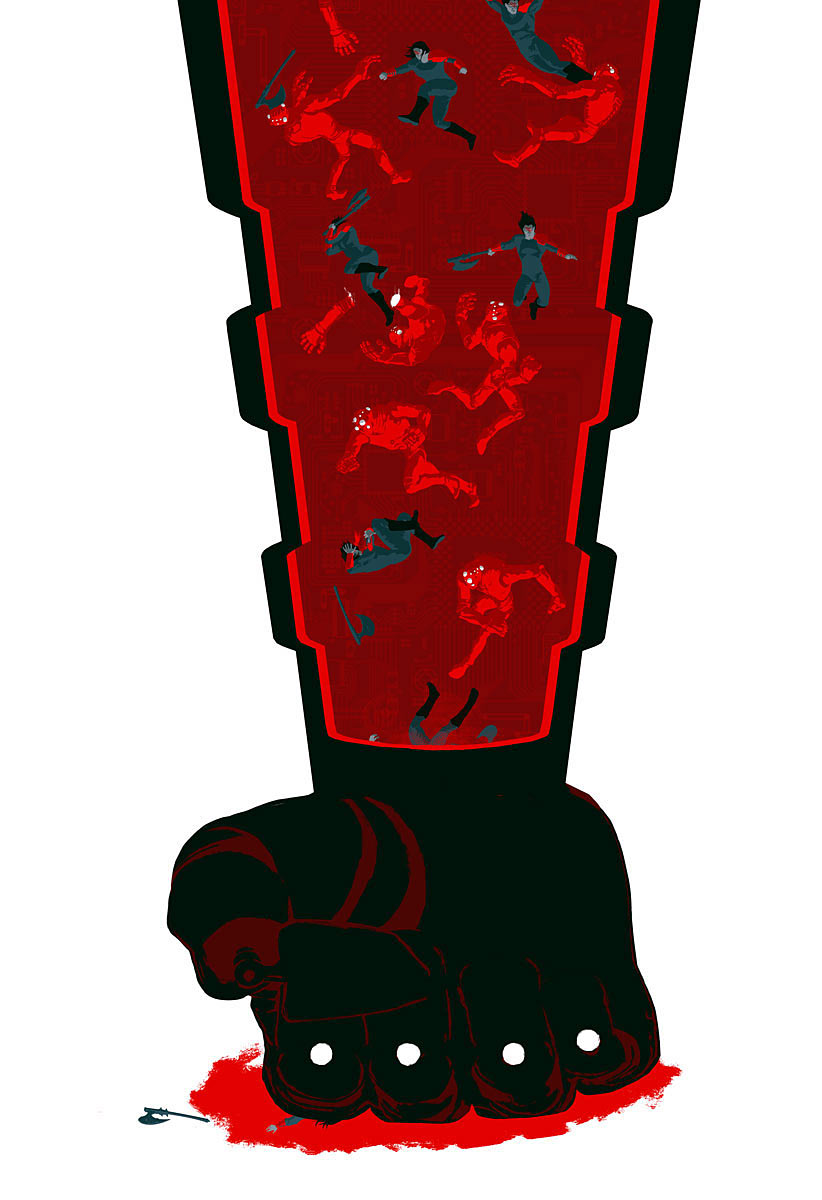 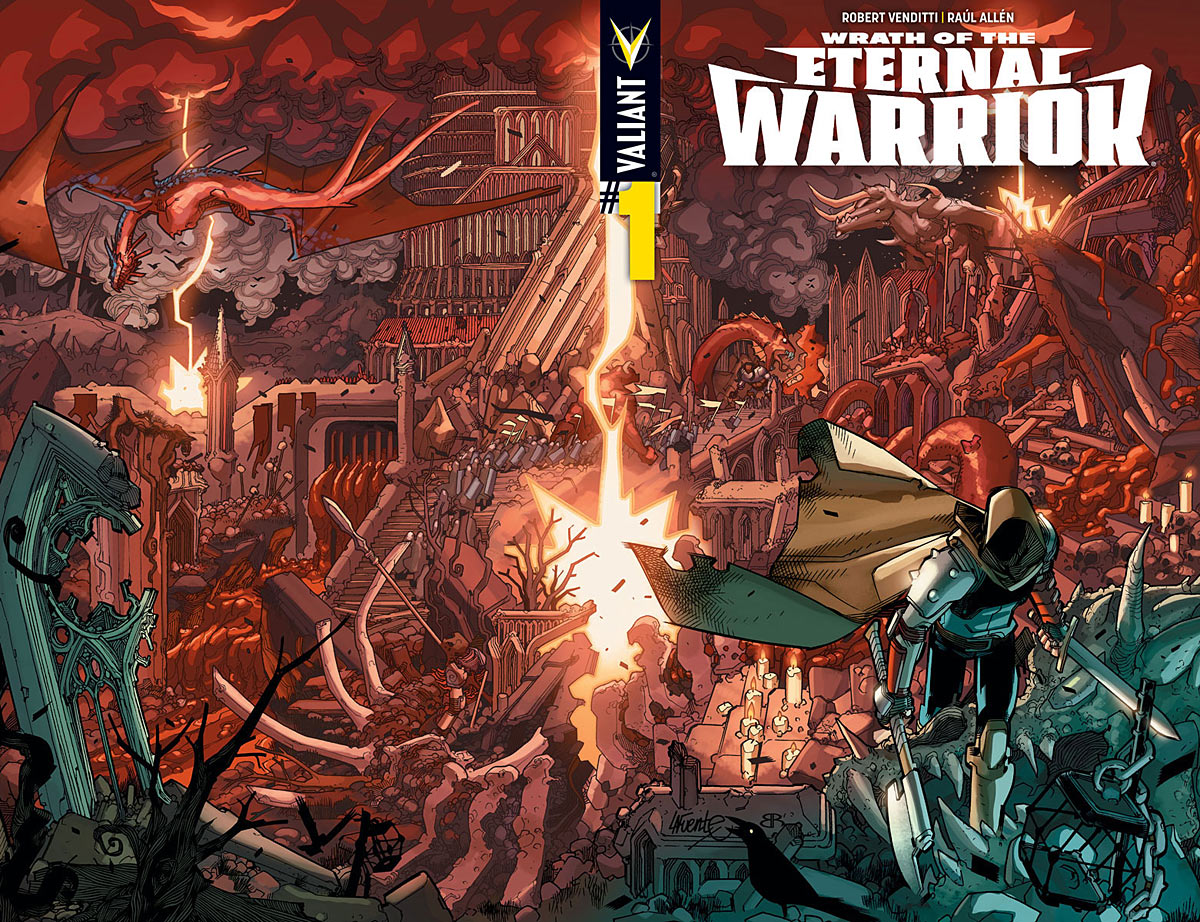 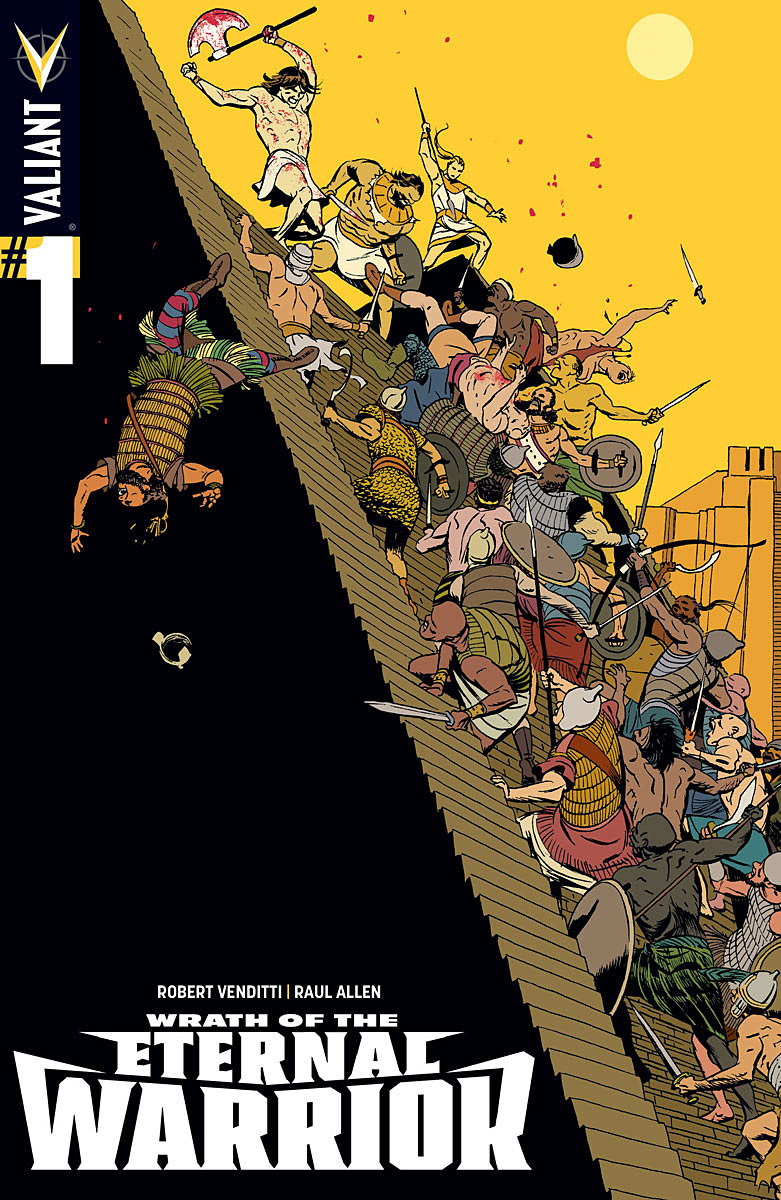 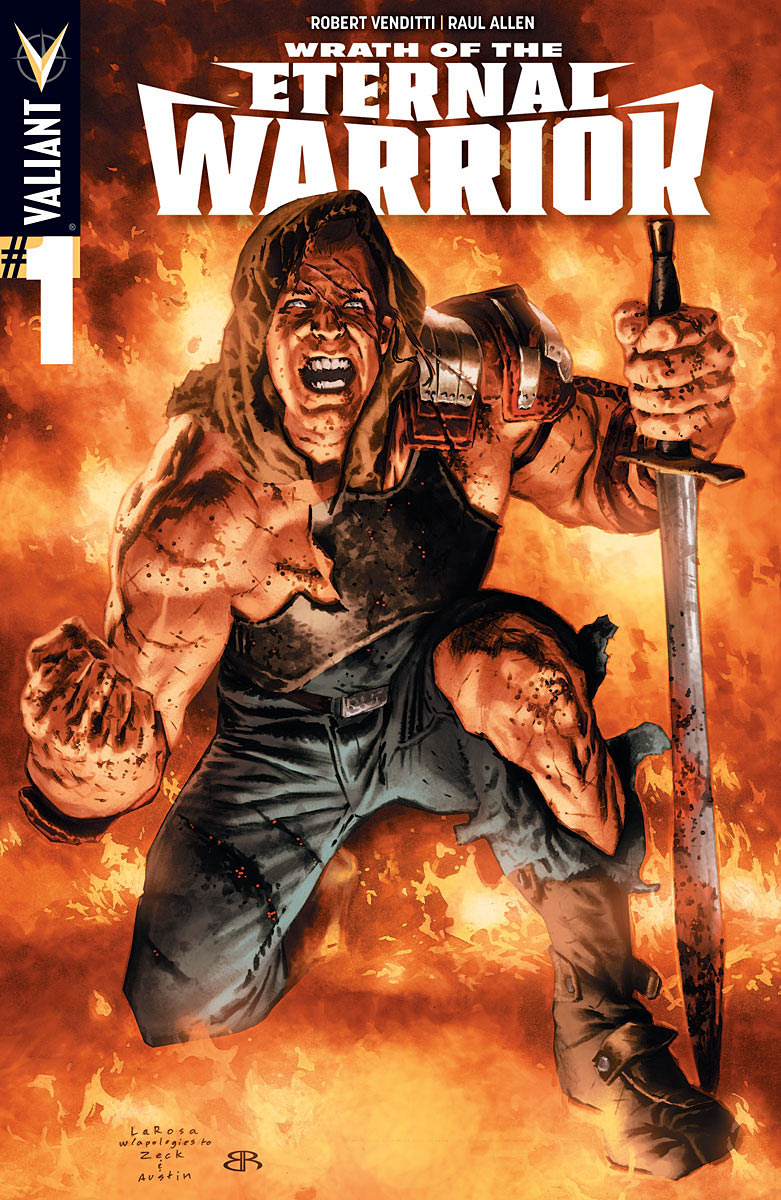 [quote]Wrath of the Eternal Warrior #1
Story by Robert Venditti
Art by Raul Allen
Cover by David Lafuente, Raul Allen, Cary Nord, Marcos Martin , Lewis Larosa [hide…]
Publisher Valiant Entertainment
Cover Price: $3.99
Release Date Nov 18th, 2015
For five millennia, the Eternal Warrior has shaped history at the end of his sword. He’s razed empires, toppled civilizations, and broken armies as an immortal soldier in service to the Earth.
But now, the Eternal Warrior has been torn from the world he once protected and finds himself stranded in a hostile alien landscape unlike any he’s faced before. Separated from his earthly environs, can history’s deadliest soldier survive a realm far older, far deadlier, and fare more ruinous than anything he’s ever encountered?
Beyond Earth lies eternity… This November, New York Times best-selling writer Robert Venditti (BOOK OF DEATH, X-O MANOWAR) and visionary artist Raúl Allén (NINJAK, Hawkeye) forge a new legend for Valiant’s master of war with an all-new ongoing series in…WRATH OF THE ETERNAL WARRIOR #1![/quote] 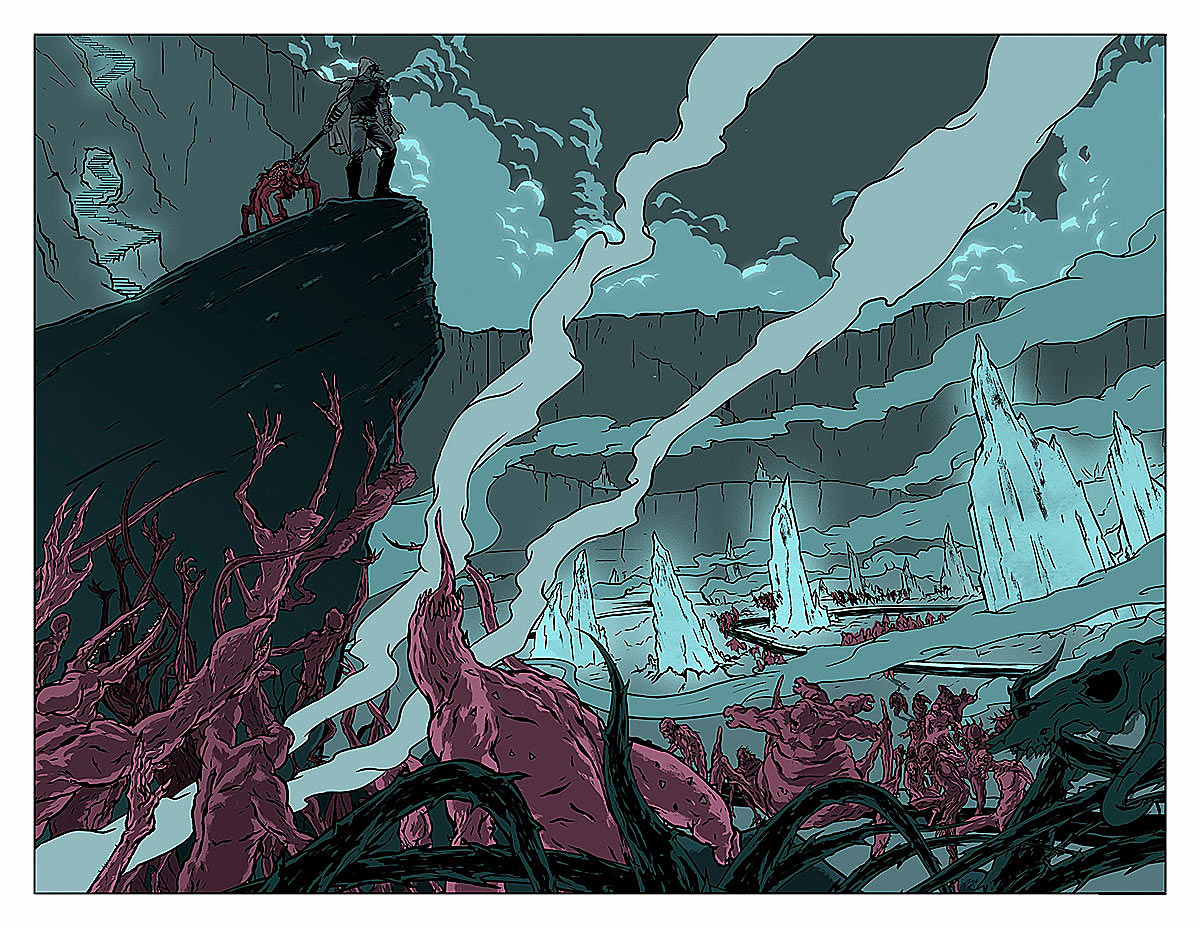 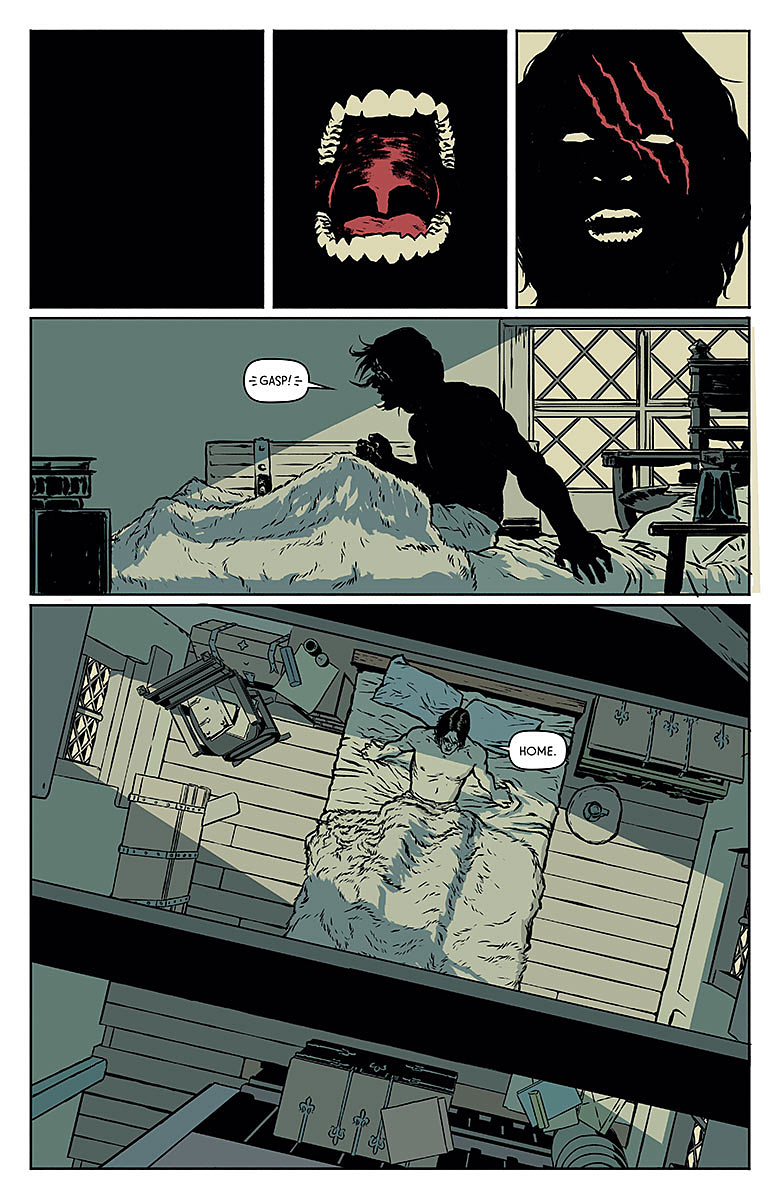 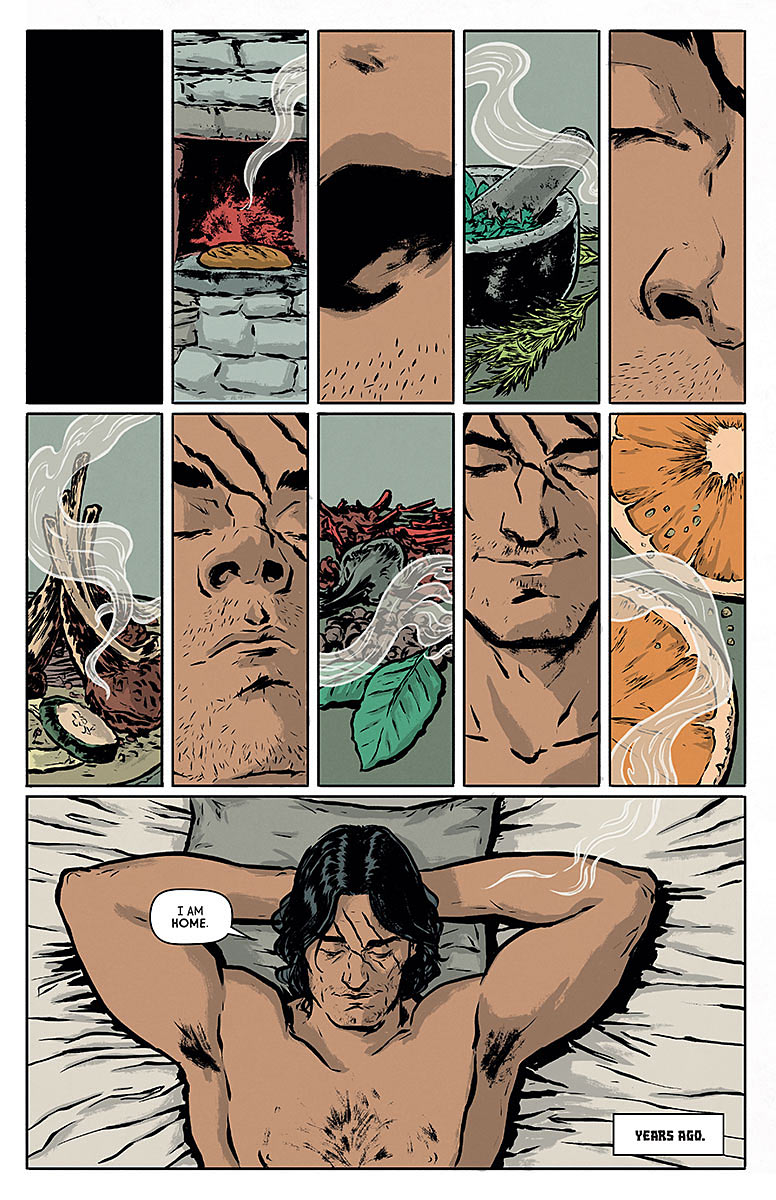 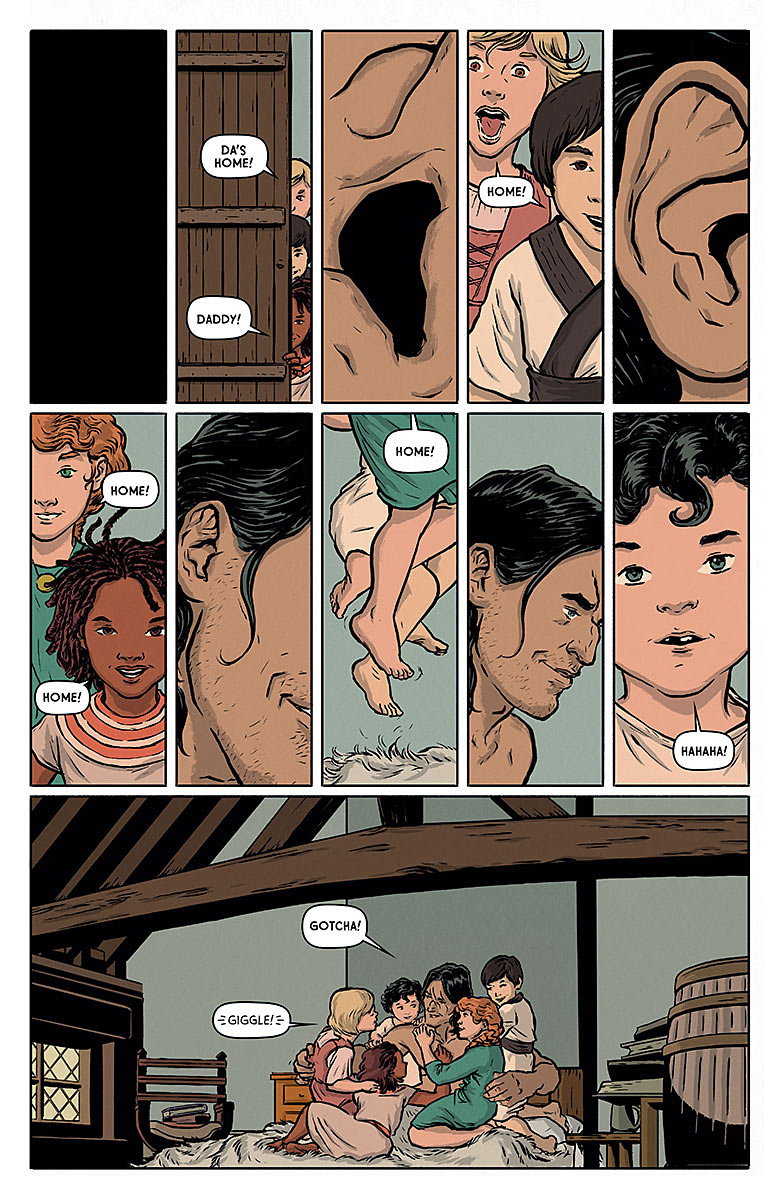 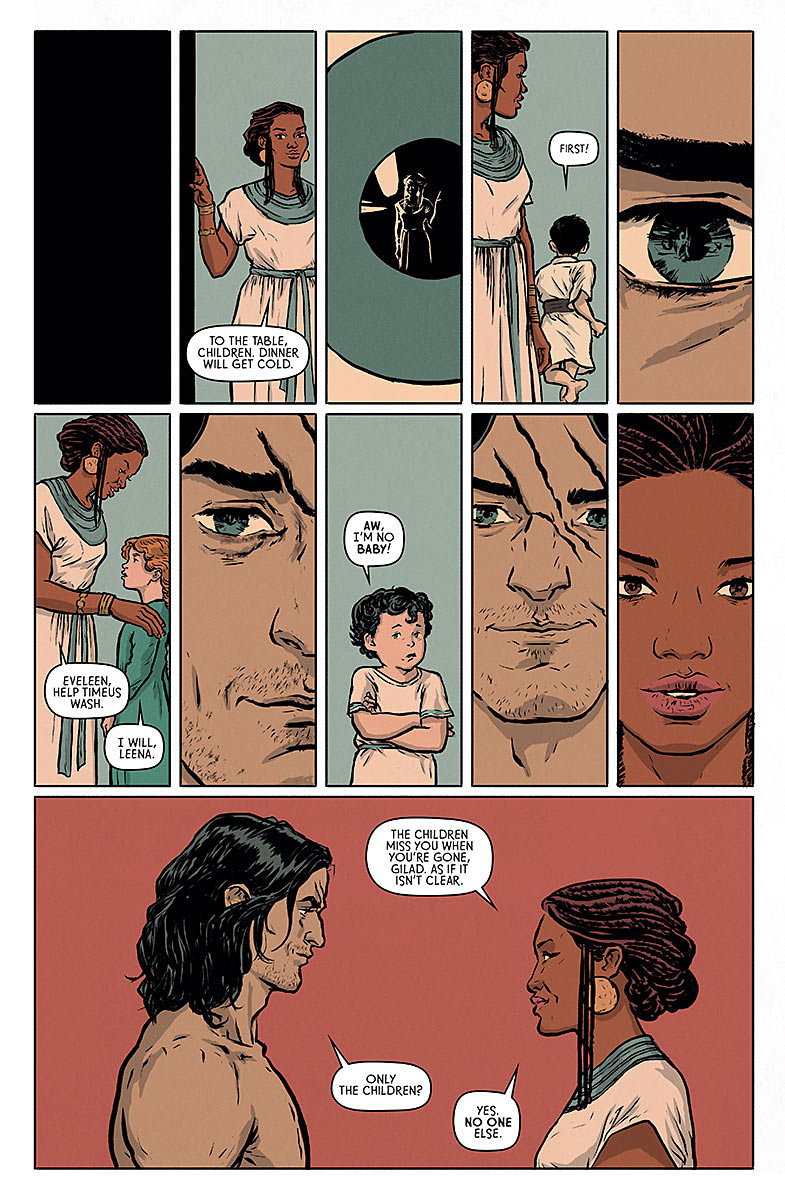 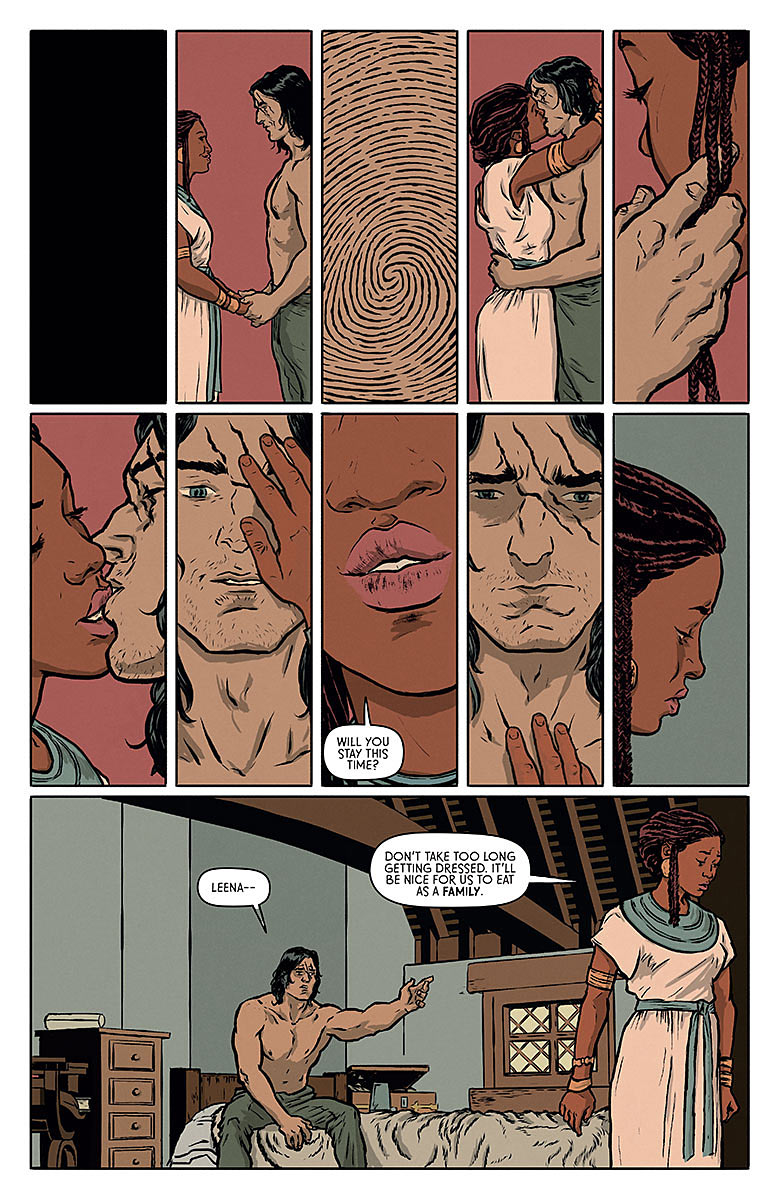 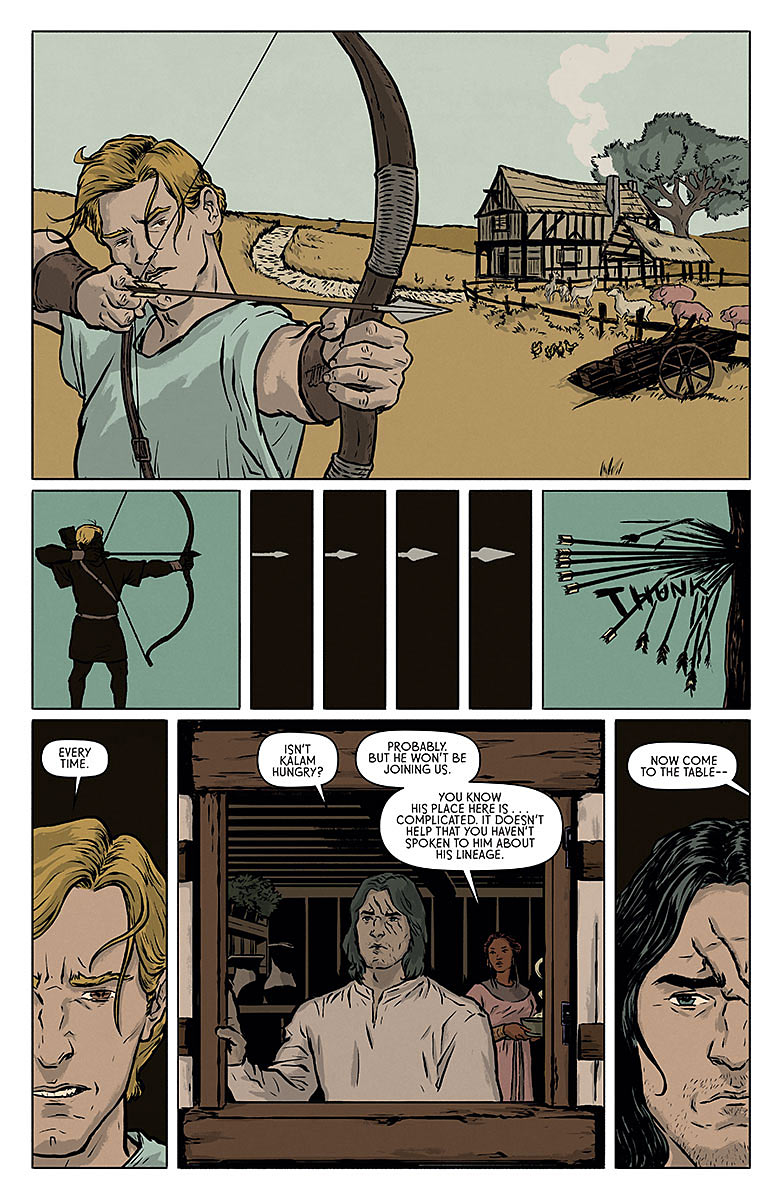 One of the great assets of a character like Eternal Warrior is the ability to dip into different time periods and different eras, and see all of these great cultures that we all love to see, whether it’s Ancient Rome or the Viking time period, or any of these sorts of things. We will be doing some of those, and some of those will be flashbacks in issues and some of them may be entire story arcs or issues that take place at a different time. It’s very much a story that’s focused on the present and the modern-day Valiant Universe, so anything we do way back in history will always be informing the present.

[quote]WRATH OF THE ETERNAL WARRIOR #2

[quote]I don’t think the ending with Master Darque would have been anticipated, nor do I think that fans actually thought they’d see Gilad actually die – and yes, he’s actually dead. He’s not getting up, and he’s not walking around. And this is something that springboards us into what we’ll be doing in Wrath of the Eternal Warrior #1.

But all along the way, I think we’ve embedded a fair number of teases about what’s coming in the future not just in our series but in the tie-ins as well that will eventually come to fruition.

But yeah, there’s a lot still in there waiting for readers to discover long after the series is over.[/quote]

[quote]WRAITH OF THE ETERNAL WARRIOR #3

Description: Torn from the world he once knew, Gilad’s bone-breaking journey back to Earth and the people he was sworn to protect takes a brutal turn! Putting all he holds dear on the line to save our world’s future, the Eternal Warrior prepares to confront the most nefarious adversary of all – but the cost of victory may be too steep.

[quote]WRATH OF THE ETERNAL WARRIOR #4

Cover A by DAVID LAFUENTE

Cover B by RAUL ALLEN

This tech environment that he is going to see in the labyrinth is something that he has never seen the likes of before. It will be a great challenge for him. And operating in the background the entire time is this knowledge that someone has put him here for reasons he does not yet understand. He is trying to figure that out at the same time he is trying to survive. And as we come to see, for him not to survive. What the motives are behind that and how the Dying One is connected not just to Gilad but other people in his family, who we have seen in the afterlife, will also be explored. The Dying One reaches so far back into Gilad’s past, Gilad has no idea. It’s a very, very long game approach. The Dying One always knew what he wanted to do, but the world needed to get modern enough for him to be able to do it.

[quote]Wrath of the Eternal Warrior #7

The answer lies at the heart of the “LABYRINTH” itself…and as Gilad endures a gauntlet of cutting-edge technology and sharpened steel, he’ll soon discover why the merciless figure known only as the Dying One has singled the Eternal Warrior out for the ultimate deathtrap.[/quote]

[quote]WRATH OF THE ETERNAL WARRIOR #6

Cover A by PHIL JIMENEZ

Cover B by JUAN JOSÉ RYP

[quote]Wrath of the Eternal Warrior #9

“LABYRINTH” delivers the killing blow! The darkest hour of the Eternal Warrior’s long life has arrived with blood and torment. Behind every wall and around every corner of the Dying One’s “LABYRINTH,” new and sadistic ways to burn, tear, and break Gilad Anni Padda await. As the Eternal Warrior’s greatest enemy inches closer to unlocking the secret of never-ending life, is all hope lost for Earth’s immortal soldier? The monumental Eternal Warrior epic of the year delivers another crushing blow as New York Times best-selling writer Robert Venditti (BOOK OF DEATH) and visionary artist Raúl Allén (Hawkeye) enter the darkest corner of “LABYRINTH” yet!
[/quote]

[quote]WRATH OF THE ETERNAL WARRIOR #10

Description: Pain and suffering await at the Labyrinth’s end! Against all odds, the Eternal Warrior has fought his way to the Labyrinth’s brutal and mysterious center. But his suffering is far from over! Standing between the Earth’s immortal master of war and freedom stands the figure only known as the Dying One…and the masterstroke in his centuries-long plan to unlock the secret of the Eternal Warrior’s immortality! Battered but not beaten, can Gilad Anni-Padda rise once more to fell his greatest foe…or will the madness of the “Labyrinth” break his mind as well as his body?

[quote]WRATH OF THE ETERNAL WARRIOR #11

Description: New arc! Valiant’s immortal master of war makes a deal with a devil! Gilad Anni-Padda, the Eternal Warrior, has sacrificed his humanity for the betterment of the Earth. Empowered with the gift to recover from any wound - and even death itself - he has waged an endless crusade to guide the path of civilization through the ages. But as the centuries pass and his list of battlefield victories grows, he is fated to always reap the same sad reward: to see his families, his children, and all his loved ones… age, wither, and die… Now, the Eternal Warrior will be presented with a choice that could end his grief forever. An opportunity to resurrect the fallen sons and daughters that he believed forever lost. But this chance for peace and happiness will come at a terrible cost… and in service to an evil far greater than any Gilad has faced before.

[quote]WRATH OF THE ETERNAL WARRIOR #12

Description: Enduring for centuries, but haunted by regret, the Eternal Warrior has trespassed against the nature of life and death, to restore the life of a son he lost centuries ago. Now, hunted by demonic forces in the space between this world and the next, Gilad has finally found the wayward boy that he has sworn to rescue from the edge of eternity, no matter what the price. But will the young man called Kalam come willingly to the father he never knew – or has the Eternal Warrior spawned a new enemy for the ages?