the @Marvel “legacy” tease getting their speculations so splendidly wrong. 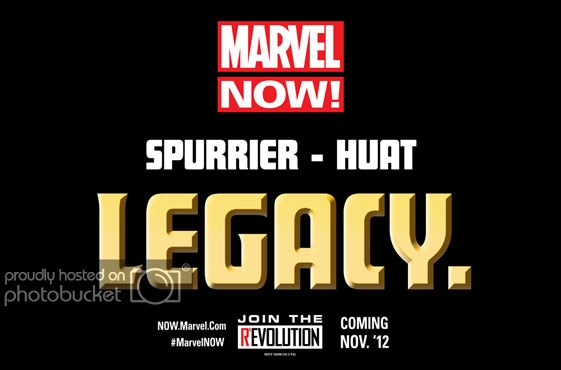 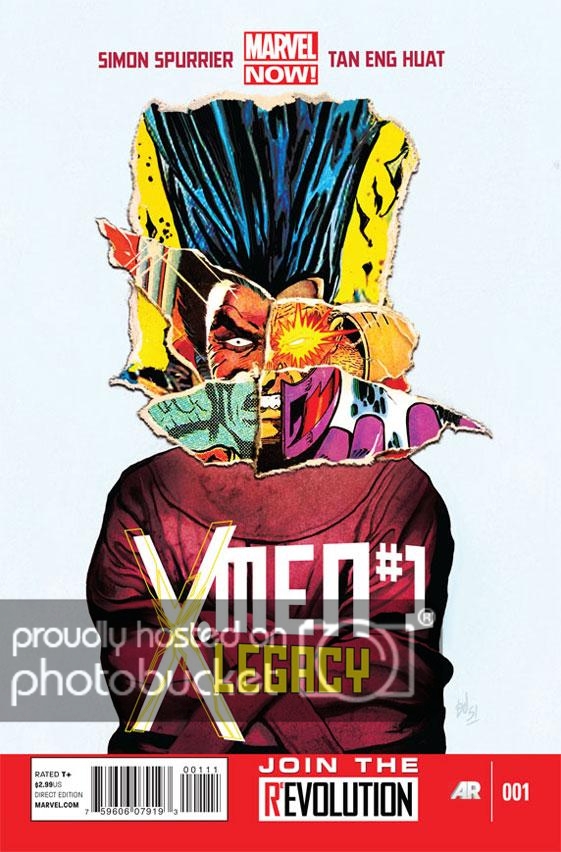 *On The New Direction Of X-Men Legacy: *

I’d go so far as to say the title’s historically had a second constant too: a certain focusing of perspective; an earnestness and personality-led truth which comes from experiencing things through the eyes of a single character rather than bouncing between all the members of a team. It’s a more direct narrative POV, essentially. In the past the title has been principally preoccupied with Xavier, then Magneto, then Rogue… Now it’s David’s turn. The whole point of doing things this way is that we get a really unique perspective on the Marvel Universe in general and its mutanty side in particular. I tend to think things take on a richer, more truthful flavour when they’re being processed through a character’s direct filter, and it opens the door (or in David’s case, ha, doors) to a lot of interesting new stories. As for the vibe you identifed – the (literal) legacy of the x-verse – yeah, that’s still hugely important. We’re going to be bumping into a lot of surprising but familiar faces and concepts along the way. Part of my original pitch was to treat one half of David’s tale as if it were a homage to Claremont-era X-Men, then juxtapose and strike sparks off it with the other half. Which I can’t really talk about at all.

*On Nailing Down The Personality Of A Character Like Legion: *

Does he have a core personality? Yeah, definitely. It’s debatable whether that’s something which has historically always been the case – he’s passed through so many writers’ hands and been characterised with so many different psychic flavours – that I’m not sure it’d be possible to really say “this is what he’s always been like”. But there are clues in the mix, and recurring themes, so this title is really our opportunity to coalesce everything and say “this is the definitive David Haller.” I hesitate to say too much about him because part of the journey we’ll be taking is about meeting this amazing guy properly for the first time. But there are a few obvious notes you’d expect to see: he’s haunted by the trouble he’s inadvertently caused in the past, he’s shaped to a certain extent by his relationship with his father, and he’s constantly anxious about his own mind. He’s got a fascinating setup: he’s one of the most powerful beings in the Marvel Universe but he can’t trust his own brain. That’s a fantastic, and often spooky, tension.[/quote] 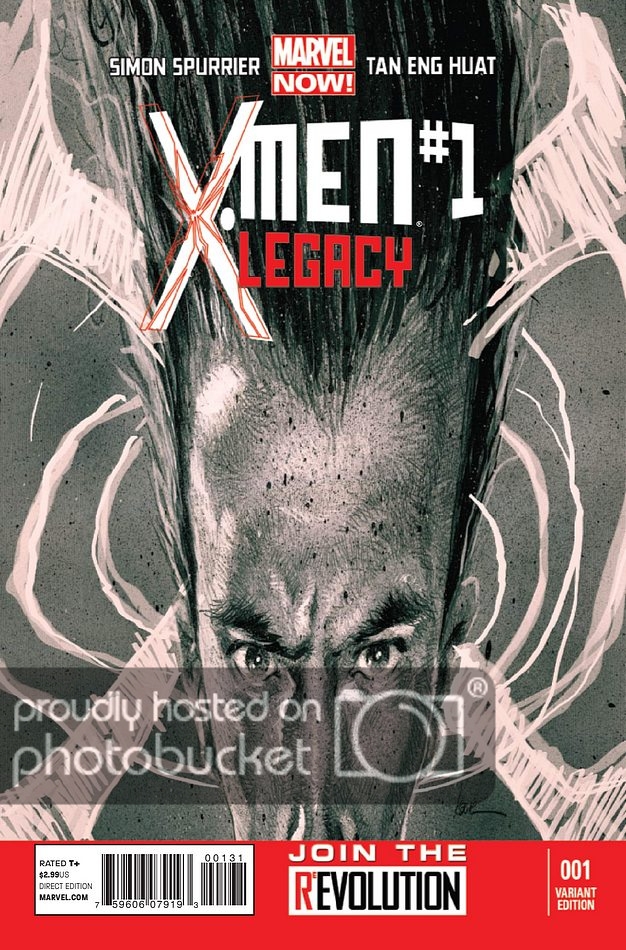 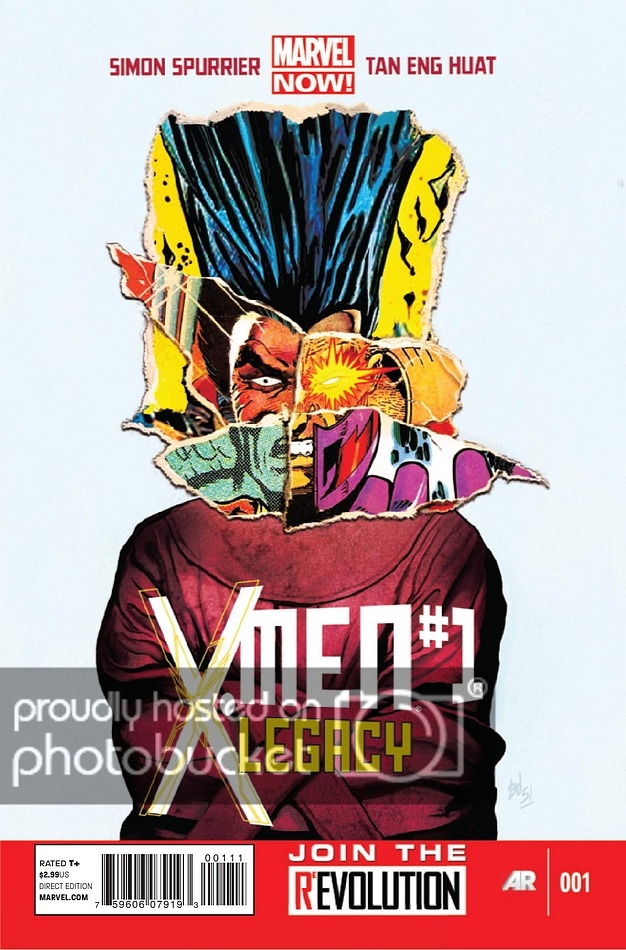 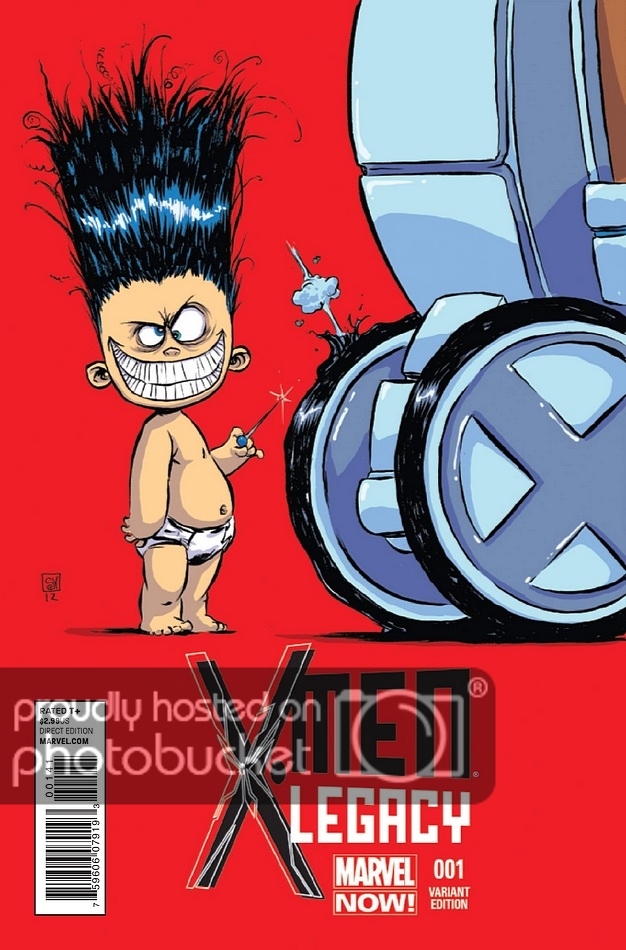 [quote]X-MEN LEGACY #1
*SIMON SPURRIER (W) • TAN ENG HUAT (A)
Cover by MIKE DEL MUNDO
Variant Cover by KAARE ANDREWS
Young Baby Variant by SKOTTIE YOUNG
Blank Cover Variant Also Available
Legion, the most powerful and unstable mutant in the world and son to Professor Charles Xavier, has killed gods and reshaped the face of the universe. NOW! in the aftermath of Avengers vs. X-Men, Legion will finally attempt to conquer his demons and embrace his father’s legacy!
32 PGS./Rated T …$3.99 *[/quote] 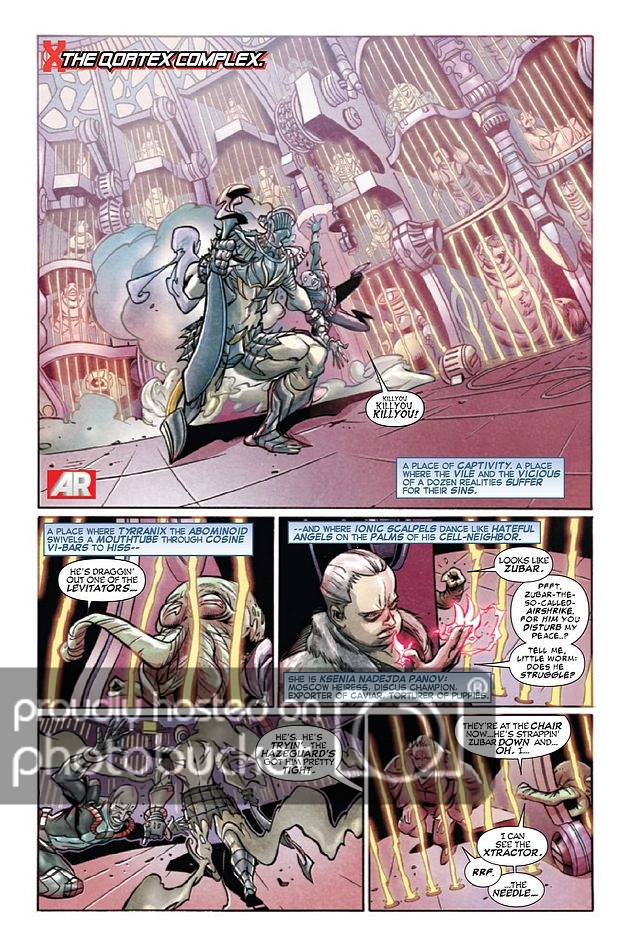 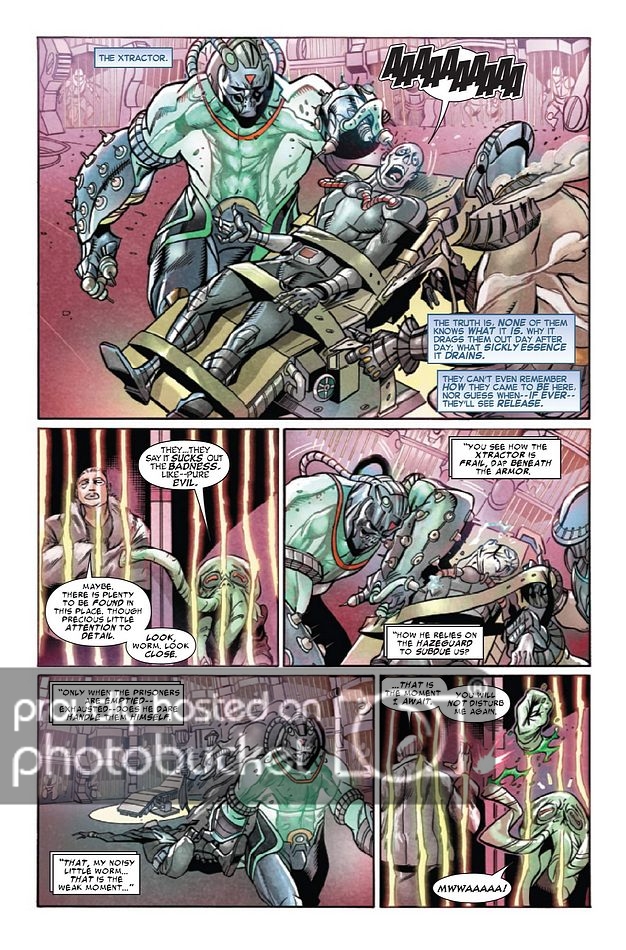 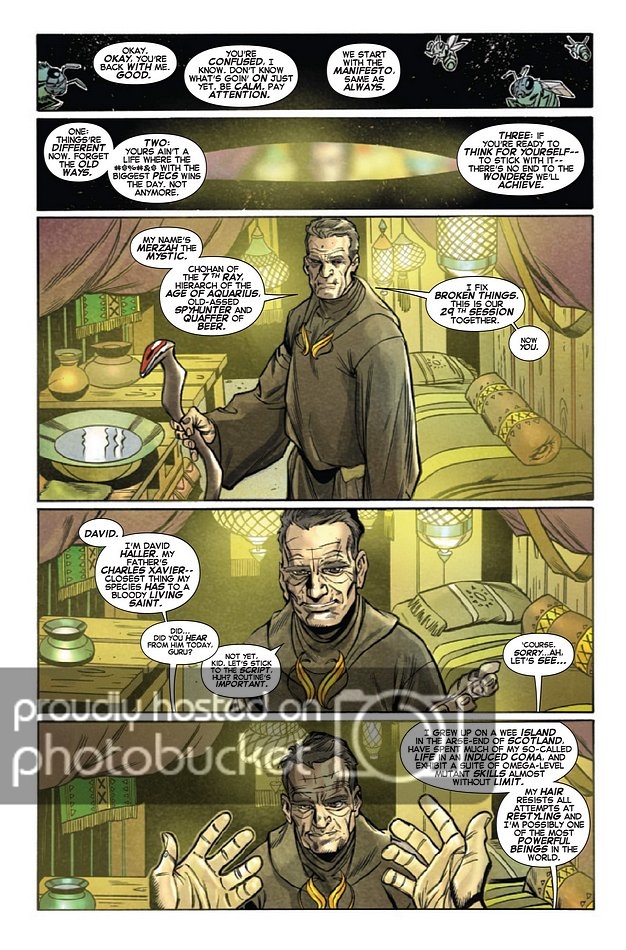 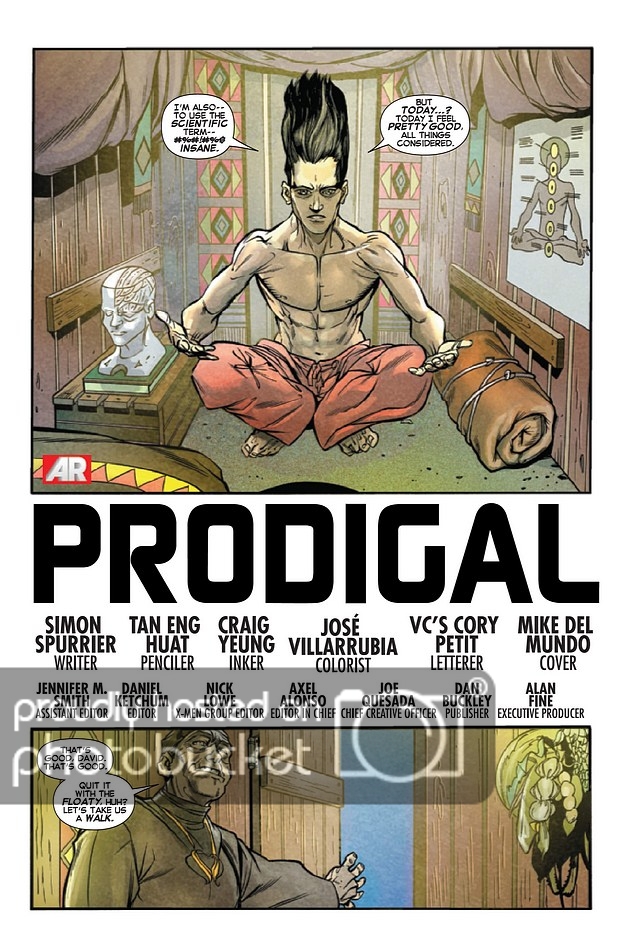 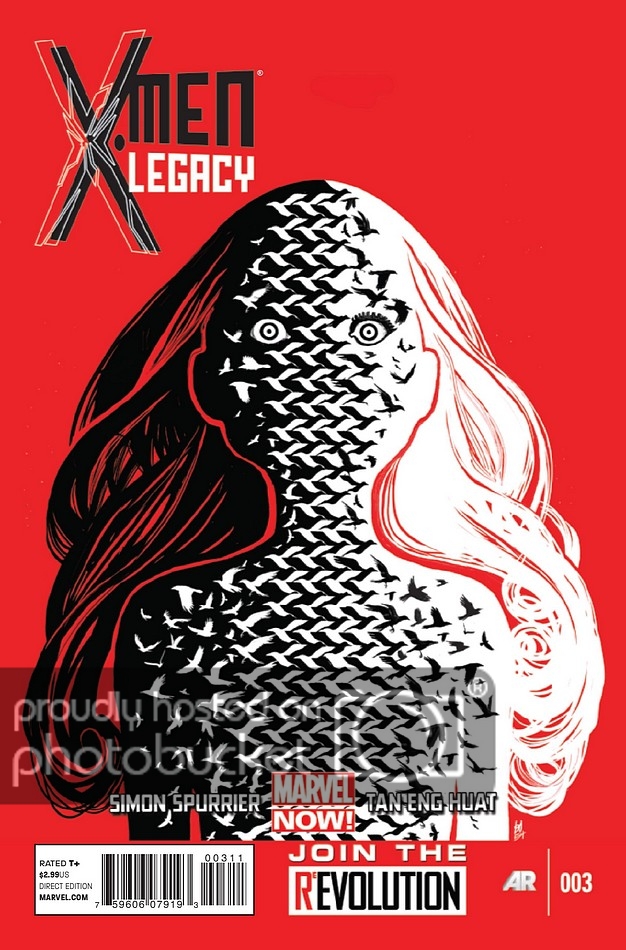 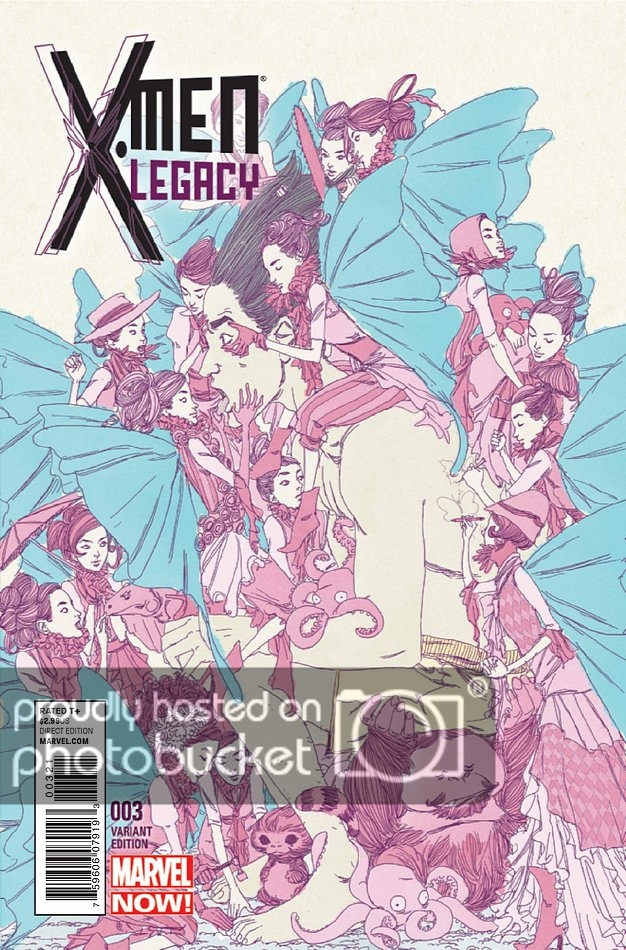 [quote]X-MEN LEGACY #3
SIMON SPURRIER (W) • TAN ENG HUAT (A)
Cover by MIKE DEL MUNDO
Variant cover by TBA
• Legion must keep his inner demons in check long enough to help newly-manifested mutant twins who are being exploited by a criminal cartel in Japan.
• But the twins may just have plans of their own.
• As do Legion’s inner demons…
32 PGS./Rated T+ …$2.99[/quote] 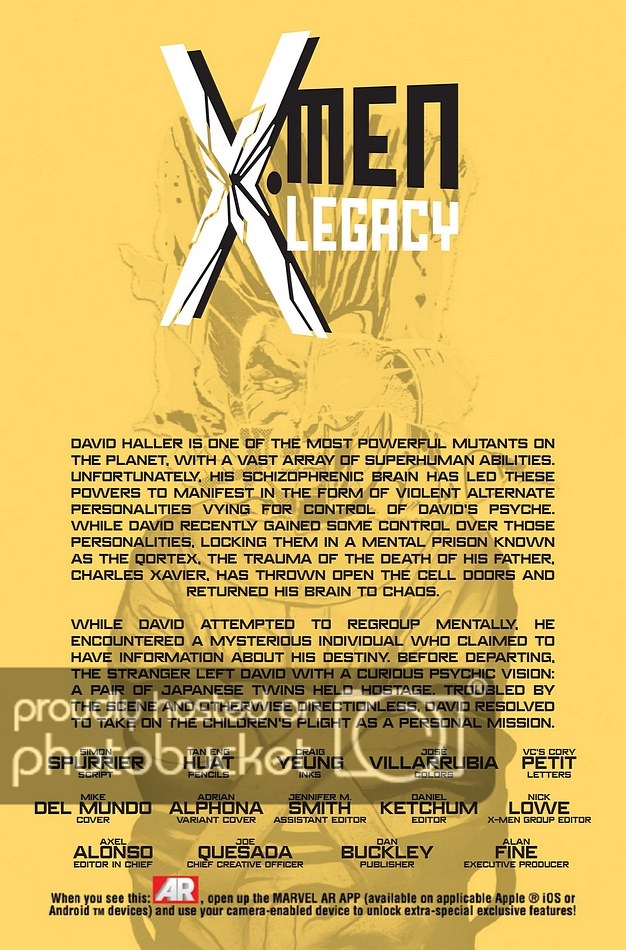 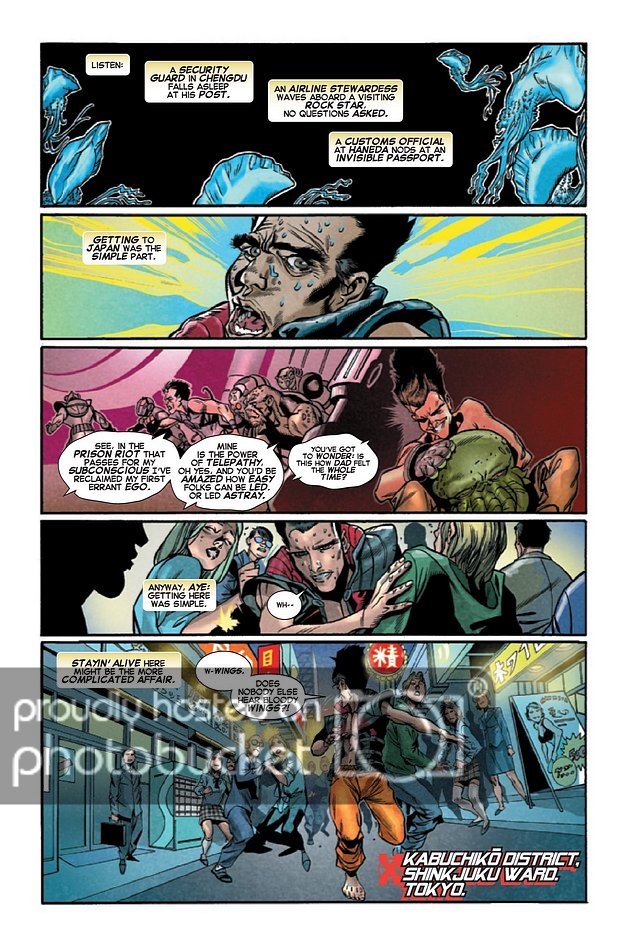 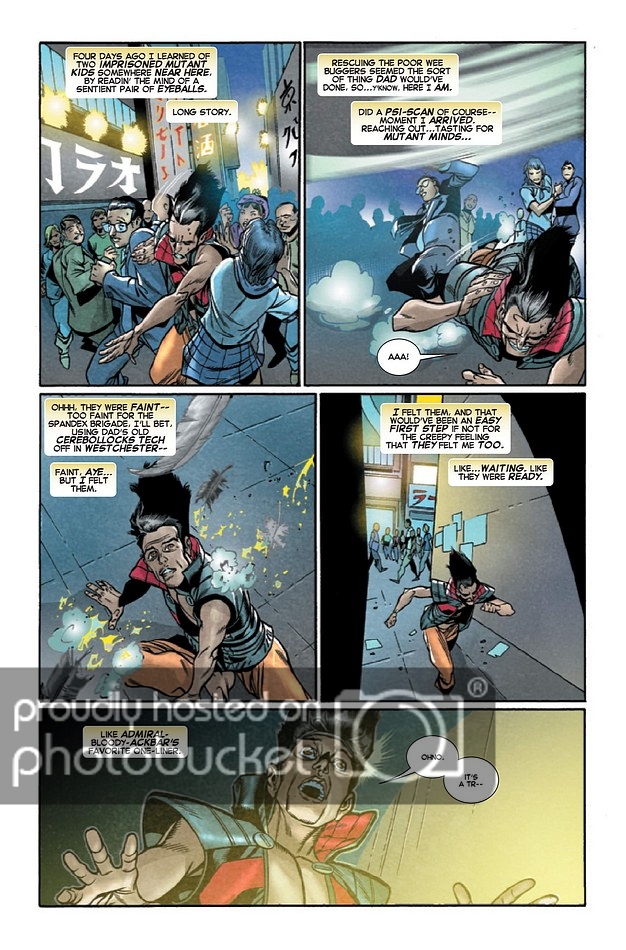 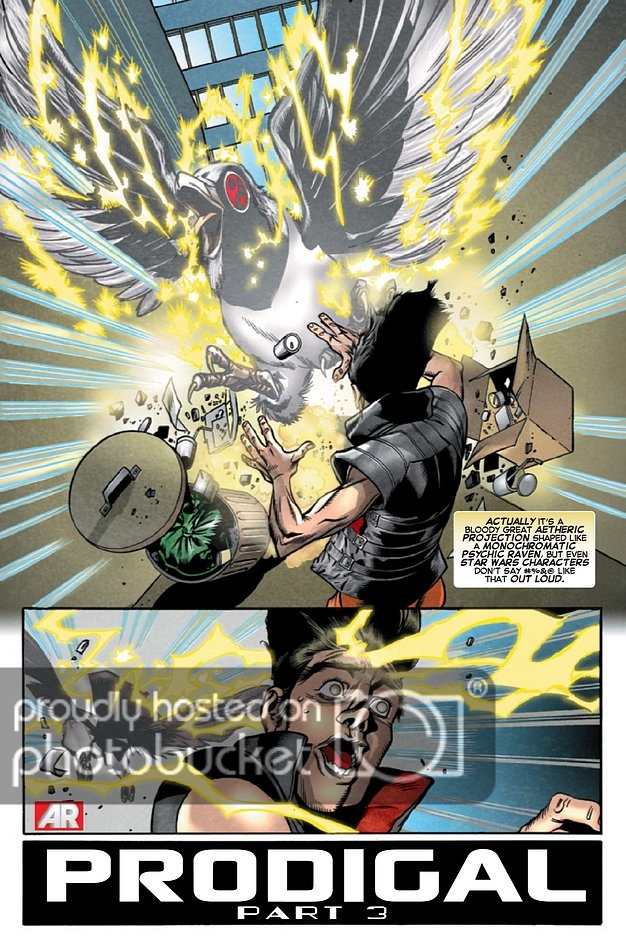 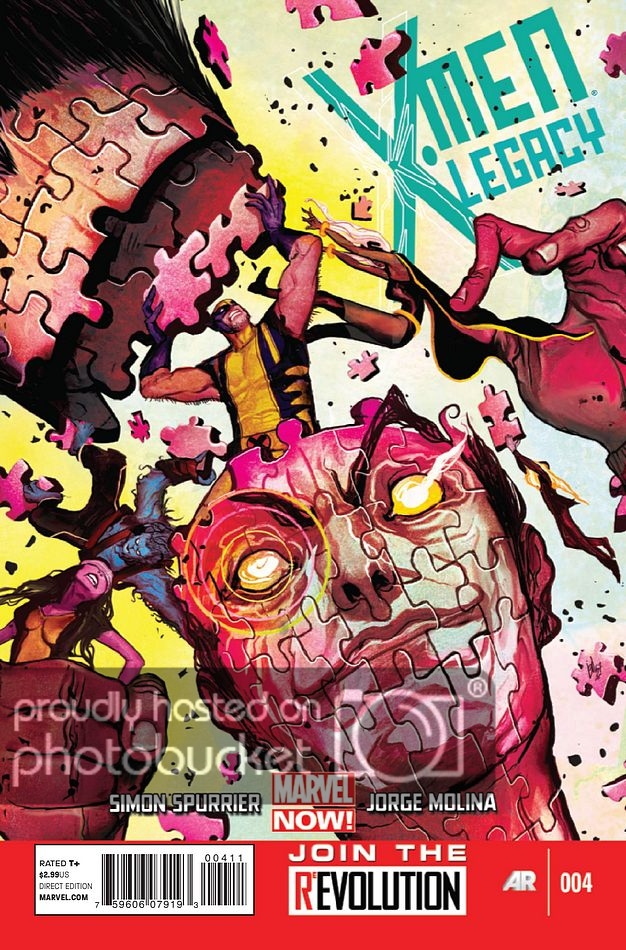 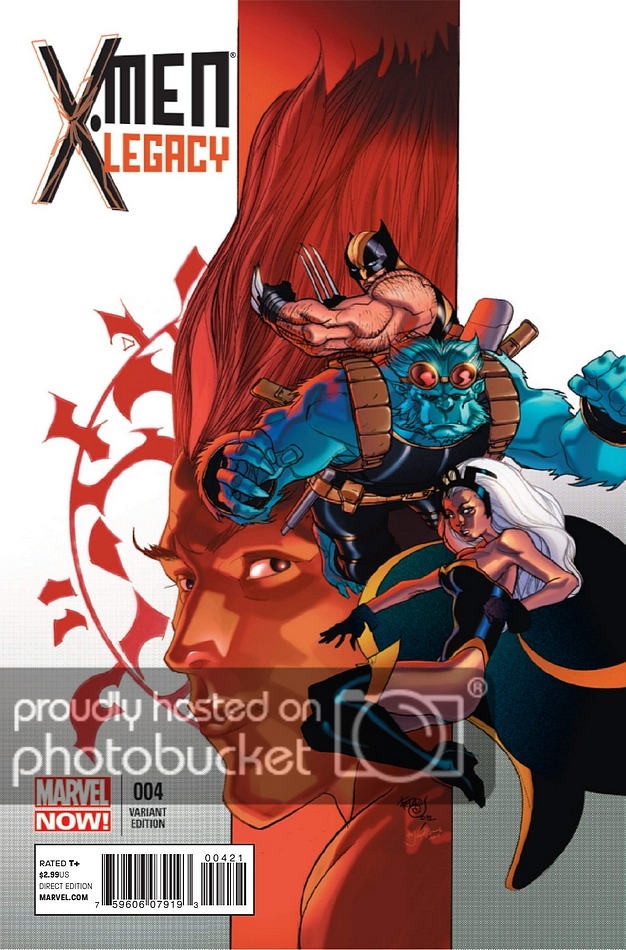 [quote]X-MEN LEGACY #4
Simon Spurrier (W) • Jorge Molina (A)
Cover by MIKE DEL MUNDO
Artist Variant by PASQUAL FERRY
• LEGION vs. THE X-MEN!
• Two new villains begin plotting Legion’s demise. And little does he know, one of them is lurking within his own psyche, and the other is now hiding amongst the X-Men themselves…
32 PGS./Rated T+ …$2.99[/quote] 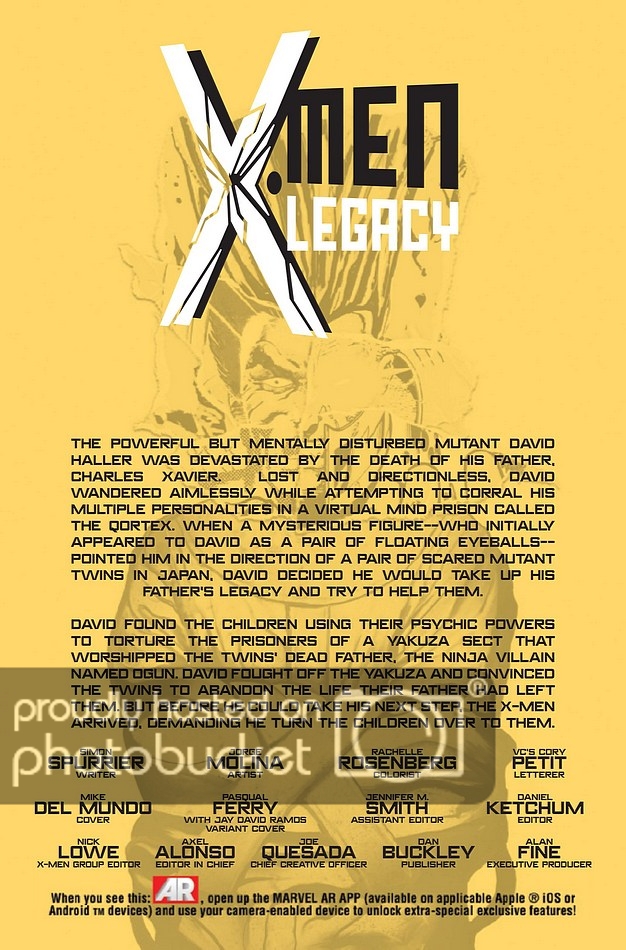 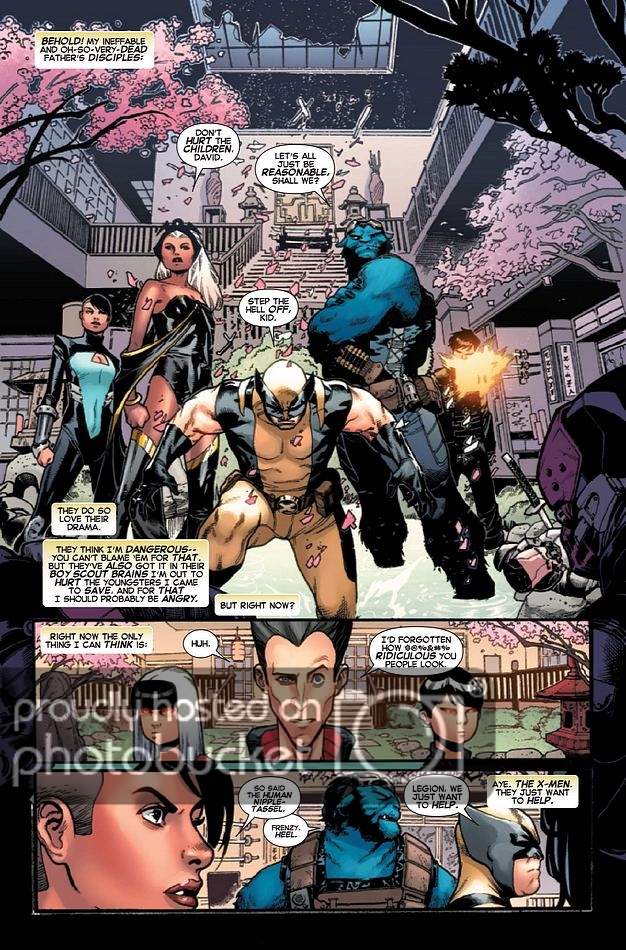 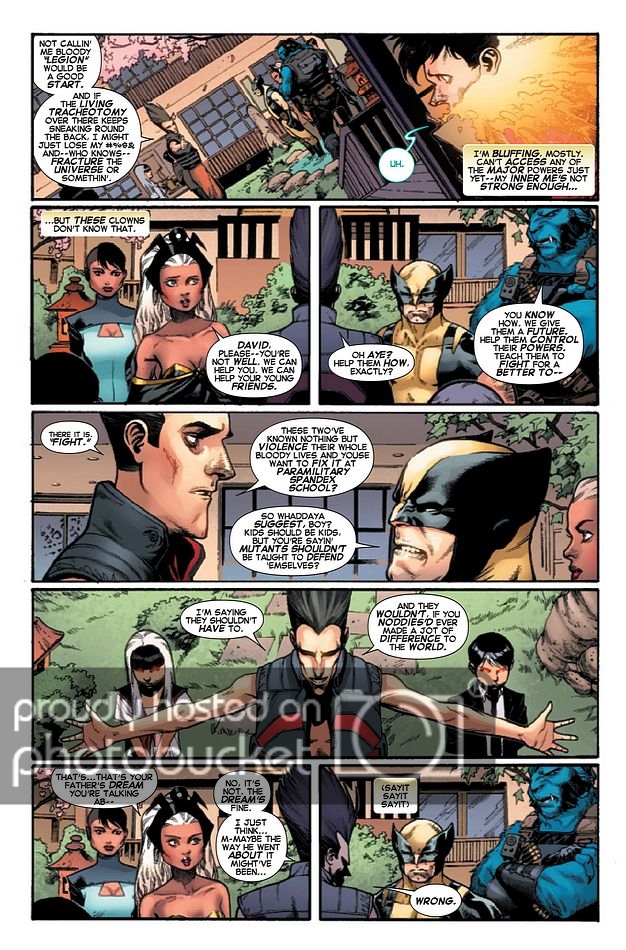 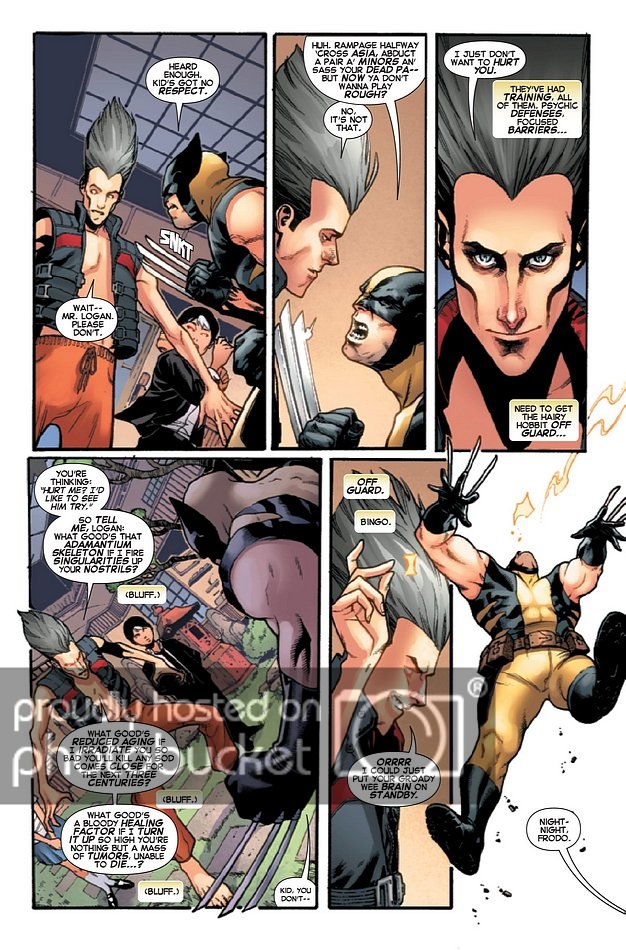 [quote]X-MEN LEGACY #5
Simon Spurrier (W) • Jorge Molina (A)
Cover by MIKE DEL MUNDO
ARTIST VARIANT BY CLAY MANN
• LEGION vs. THE X-MEN!
• Two new villains begin plotting Legion’s demise. And little does he know, one of them is lurking within his own psyche, and the other is now hiding amongst the X-Men themselves…
32 PGS./Rated T+ …$2.99[/quote]