ENTERTAINMENT WEEKLY: Marvel Legacy seems to be bringing Marvel characters down to their core aspects. Peter Parker’s gone through a lot of changes in recent years, from his time of possession by Doc Ock to his recent stint as head of Parker Industries. How does Legacy bring him back to earth?

DAN SLOTT: This is a Peter Parker who’s had it all, lost it all, and now has to find his place in the world again. It’s a return to the scrappy underdog status that’s the Peter Parker we all know and love. We’re going to see a return to form, with old friends coming back onto the stage, some in all-new ways. It’s all been leading to this — from Big Time, to Superior, through Spider-Verse, and the Parker Industries era. It’s been a crazy ride, but now that we’re here, we’re going to get a Peter/Spider-Man that’s closer to a core Spidey than we’ve had in years. Everything counts. Payoffs for longtime readers are coming, but the Marvel Legacy of it all will also make this a great jump on point for new readers — or people who’ve just discovered Spider-Man in Homecoming.

It sounds like Peter will be involved with The Daily Bugle again after some time away. What role does the Bugle fill in his life?

In Amazing Spider-Man we’re going to see The Daily Bugle and the Bugle cast come back in a big way. And, no, it is NOT about Peter becoming a photographer again. It’s a new twist. It’s something we haven’t seen in Amazing Spider-Man yet. After 55 years, that’s a pretty cool trick, right? And it’s a development I’ve been dying to get to for a long time!

You’ve worked on Spider-Man for a while now. How has your relationship to the character changed over that time?

Since I was 8 years old, Spider-Man wasn’t just my favorite super hero, he was my favorite character in all fiction. That hasn’t changed. It’s just now I’m the guy stacking the deck against the poor schlub. Every year, every issue, every panel it’s my job to find new ways to test him, to knock him down. And it’s always worth it because nobody gets back up like Spider-Man. And when he gets back up, we all do.

Between this, Chip Zdarsky and Adam Kubert’s new Spider-book, new cartoons, and of course Spider-Man: Homecoming, this feels like a great time to be a Spider-fan. What will hungry fans get out of Amazing going forward?

Couldn’t agree more! Chip and Adam on Spectacular, the Miles Morales, Ben Reilly, and Spider-Gwen books, the new Disney XD Spider-Man cartoon, Homecoming — this is a golden era for Spidey fans! Over on Amazing, we’re going to be serving up everything you love about Spider-Man, all the quips and thwips! There’ll be big adventure, soap opera twists, the craziest villains, the greatest supporting cast, and you’ll be getting it gorgeously penciled by Stuart Immonen, inked by Wade von Grawbadger, and colored by Marte Gracia — the best damn art team in all of comics! Plus, don’t forget, when Legacy kicks off, Amazing Spider-Man goes back to its original numbering. And that number is #789. Amazing Spider-Man #1 kicked off in 1963. This book has been charting Peter Parker’s destiny all that time, and the countdown to Amazing Spider-Man #800 is starting now. The ride from here on out is going to be epic! And the payoff is going to be huge! 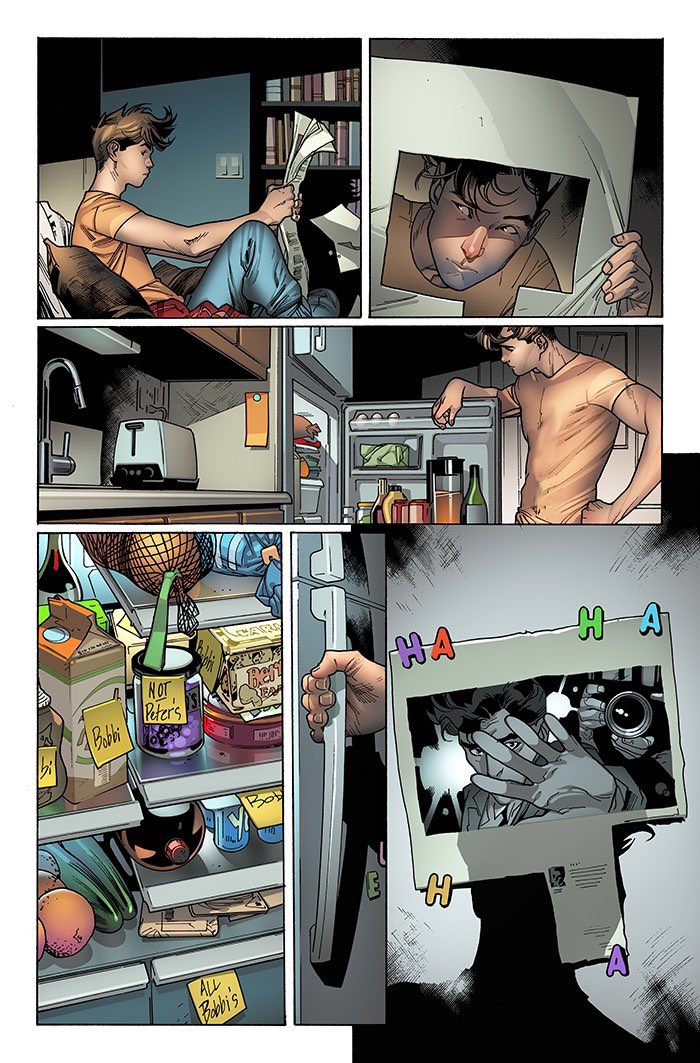