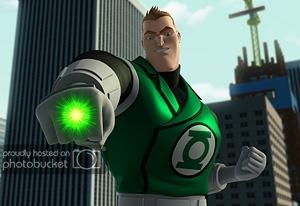 [quote]When Green Lantern: The Animated Series returns to Cartoon Network this September, Hal Jordan will find Earth a different place. After defeating the Red Lantern Corps in the far reaches of space, Hal looks to be in a good place but not so fast warns producer Jim Krieg. He warns “not to get too comfortable with the happiness Hal is feeling in his heart, because we’re just gonna mess up his life again.”

Hal’s life takes a turn for the worst when he finds that while he’s been out in space a new Green Lantern for Sector 2814 has been found in Guy Gardner, a character probably most famous for a run-in with Batman. “He’s like Hal Jordan cranked to Level 10,” said producer Giancarlo Volpe. “He’s that much cockier, more brash and a womanizer.”

Guy Gardner will be voiced by Diedrich Bader of ** Batman: The Brave and the Bold** fame. But Hal’s troubles don’t end with Guy, the second season’s big baddie will be the Anti-Monitor which will reportedly cause Hal to go on a recruiting campaign for more allies.
[/quote]